Did you know that Kia was the first Korean automaker to sell an SUV in the USA? 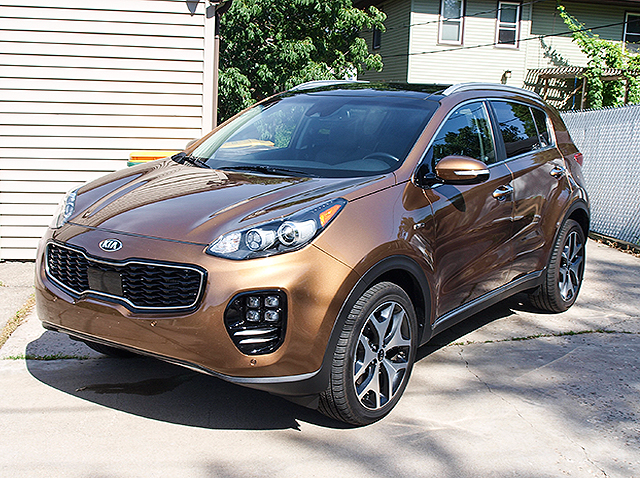 It’s true. The original Sportage arrived in the mid-to-late 1990s to compete in a class already established by Suzuki, Geo (er, Chevrolet), and Daihatsu. It was small, just a smidge smaller than the Honda CR-V and Toyota RAV4 of that era. They were designed to tackle the trails, as well as be a conveyance for those of us with active lifestyles. However, there were questions about its quality and reliability, the same questions levied upon Kias within its first decade of business in this country. They looked fun, but they went away by 2002.

A couple of years later, a new Sportage arrived in this country. Now bolstered by Hyundai, Kia’s quality began to improve. In fact, Consumer Reports named the second generation Sportage one of the “most reliable vehicles” sold in the USA. It certainly improved to fit its mission excellently. Of course, it predicated the future explosion of this segment.

Then came the last Sportage. At first, it was seen as different. Sure, it looked like an SUV, but the design was a bit overdone for what it should be. The loss of a window in the C-pillar had heads scratching. The combination of angles and curves also made people wonder if this vehicle was for real. Yet, what laid underneath was a more robust chassis and a good selection of driveline components. We actually liked it for not only its abilities, but its accommodations inside. 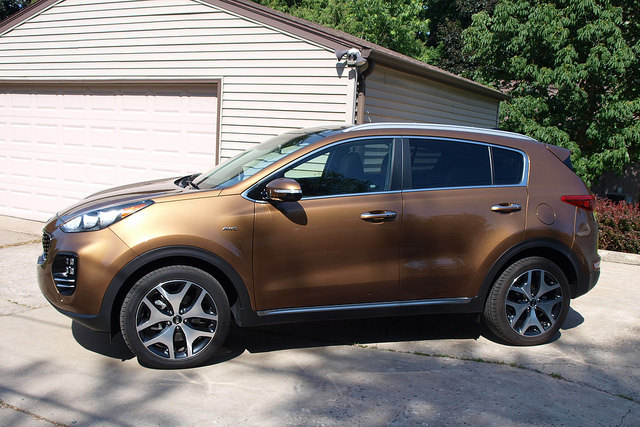 As a writer working in the automotive subject matter, I try very hard to be open minded. Yet, there will be vehicles that I would walk away with a less-than-positive summation about. This was how I felt about the last generation Kia Sportage. I still did not understand it. I was less than thrilled with how it drove. To be fair, I wished Kia would have kept to a more “traditional” SUV design as they did several years prior.

This is not to discount Kia’s climb in becoming one of the most desirable brands in the automotive business. They have been making solid vehicles with great advances in driving experience, design, and technology. The Sportage took its knocks, but it already found friends amongst its owners.

Now, we are presented with the fourth generation Kia Sportage, new for 2017. Even before it hit the showroom lots, it has already taken its knocks for its design. Are these critiques really fair? I drove one to see whether it is worth the hate, or does it brush off the haters with some other special quality?

First, I’d better talk you through its design. The haters have already spoken. No one likes the front end. No one likes the blunt design with Kia’s “Tiger” grille forged onto it. However, those who have dismissed obviously missed the point. This is not 2011. This is the future, and it’s staring us in the face. While it is not going to win friends and influence others, it shows a distinctive face that goes along with its distinctive look. Even upgraded details make it stand out: Kia’s four-bulb fog lamps, an integrated headlamp unit on top of each fender, and a grille texture that is tied to each trim level. More compelling is the fact that the front end has a higher lip. In the SUV world, we call this “having an angle of approach.” In real world terms, it means no need to scrape curbs or those old cement parking stops.

Sweeping rearwards is a modified silhouette influenced by the previous generation Sportage. The lack of glass beyond the rear door remains evident; however, the rear doors have been enlarged for a wider opening, almost 90-degrees at the hinge. The rear has been massaged with a new sculptured look with a light strip across the middle of the tailgate. New LED taillights and lower signals/backup lights finish up the look. Our SX tester came with 19-inch allow wheels shod with Hankook Kinergy tires. 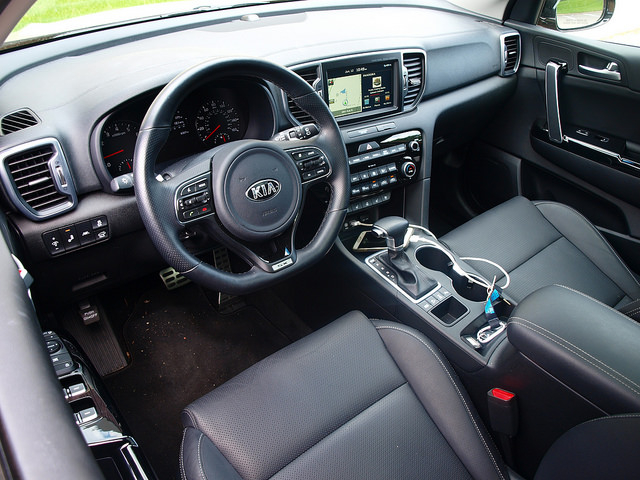 If we simply focus on the outside of an automobile, then we miss the rest of it. What’s inside is a wonderful cabin. The quality is up across the board, including the usual Kia switchgear and readouts. It resides in a low cowl, yet the cluster itself looked a little dim at its highest setting and could be too tucked away for some taller drivers. The infotainment screen is a bit low, but within reach for all drivers. Everything else is good for all drivers to control, including the short gear selector for the six-speed automatic transmission.

For occupants, it is a very spacious and comfortable place to be. Front seats offer support and some bolstering, with a good grade of leather in the SX. All four doors open to an almost 90-degree angle making getting in and out very easy. Rear seat room is good, though the seats themselves could be on the hard side for some people. If you happen to have a family, you will thoroughly enjoy the space the Kia Sportage offers. Your children will enjoy the volume of the rear area, even adult children!

A special aspect to mention is the Sportage SX’s audio system, which included a wonderful set of Harman/Kardon speakers emanating from the infotainment system. This system also includes playback via Pandora through Bluetooth, SiriusXM, and HD Radio. Kia also offers additional connectivity through its UVO app and hardware, along with Apple CarPlay and Android Auto compatibility.

Sportage customers have a couple of choices to make. You can have one of two trim levels with the standard 2.4-liter four-cylinder engine with 181 horsepower. Better still, you can choose the SX model with the 240-horsepower 2.0-liter turbocharged engine. My choice is the latter, because this engine will make the haters turn into lovers. This thing offers no turbo lag and is pretty quick. The six-speed automatic is a smooth shifting setup, especially with its all-wheel drive system. There is a drawback regarding fuel economy, as it averaged 22.8 MPG in our care. 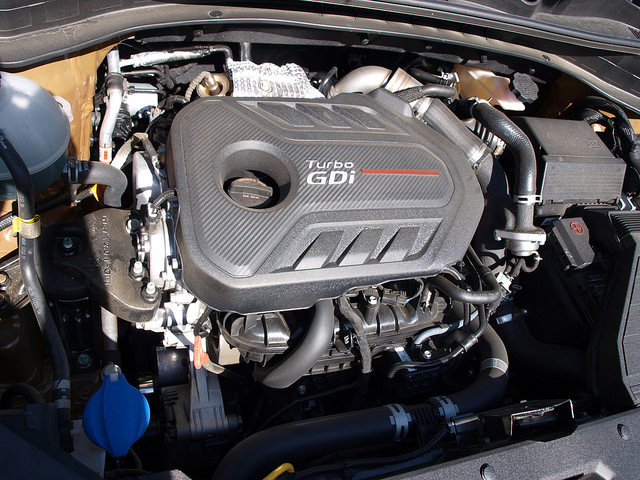 The new Sportage offers one of the smoothest rides in its class. It absorbs a lot of the road imperfections in its wake, creating a great atmosphere for drivers and passengers alike. When taking on the curves, once pushed to the limits, there will be plenty of roll and lean, along with some tire feedback. Probably best to drive it normally (i.e. slowly) through the curves. The steering is good, offering great feedback at the wheel and a solid on-center feel. I was hoping for a tighter radius, but it is good as it should be. Brakes are also excellent. It exhibited great pedal and system performance in both normal and panic stops.

Active safety is a solid part of this Sportage SX tester. Blind spot monitoring, cross-traffic alert, reversing camera, downhill brake and hill hold assist are among the features found on this vehicle.

Even though some may argue that it does not compete in one of the hottest segments in the industry, it is priced accordingly. A 2017 Sportage LX has a base price of $22,990. This all-wheel drive SX model came with a sticker price of $34,895 with no additional options.

There is a lot to love about the newest Kia Sportage. Interior space is exceptional, the performance is fantastic, and it holds its own in the face of some very fierce competition. As much as we loved the previous iterations of this model, I know you will love this new version equally. 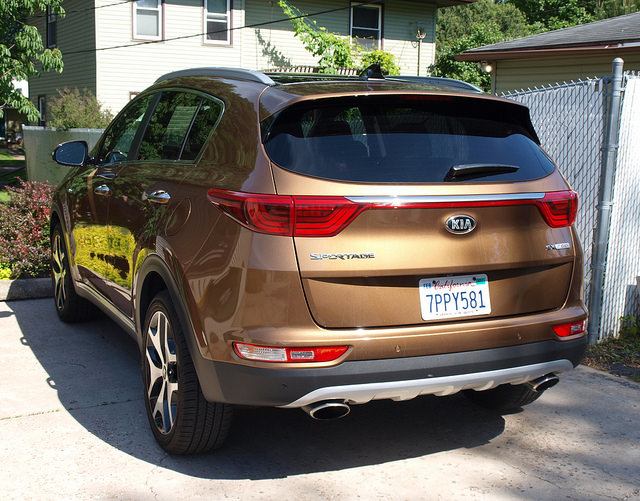 Being the first usually leads to being the best. Over the years, the Kia Sportage became a unique vehicle in its class, offering more than just looks alone. Whether you still dislike the front end or you have grown to liking it a lot, the Sportage remains a distinctive choice for customers living active lifestyles, especially if you are the one living the life!