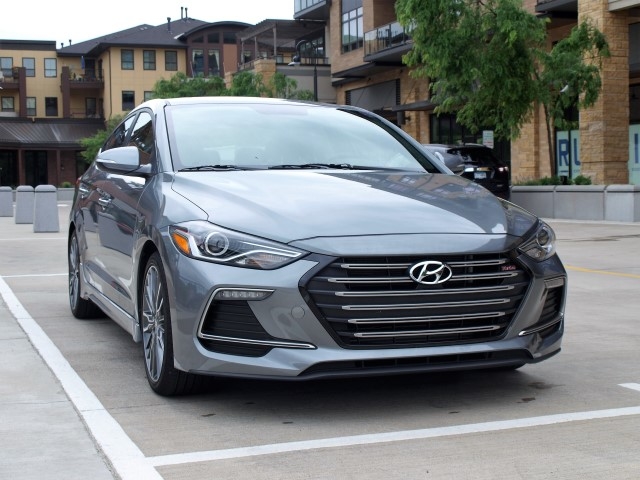 Have you ever put a Hyundai Elantra on a track?

I’m not saying this because I’m trying to be a “Gold Star Gay” or get one of Lavender‘s Community Awards for 2017. It was part of the job. This feat of tracking an Elantra was achieved at Road America in Elkhart Lake, Wisconsin. It was part of the Midwest Automotive Media Association’s annual Spring Rally this past May, which I am a member of.

Road America offers three venues on one property. The primary track is the famed road course that runs over four miles through 14 turns. Inside is a karting course that is much tighter. Usually designed for go-karts, the media association runs some of the cars available to us on this track as their autocross course.

Hyundai lent one of their newest Elantras for us to drive on the autocross course—the 2017 Sport model. I did a few laps in it and eventually had a smile on my face at the end.

A few weeks later, the same exact car arrived at my house. If only there was a track open nearby for me to repeat my autocross performance in this car… 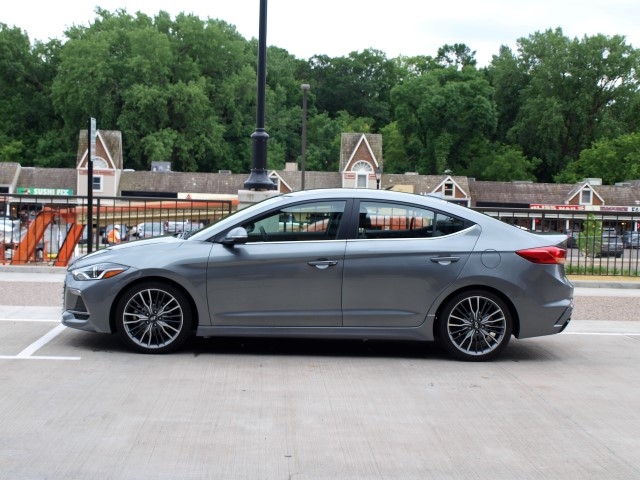 Before we dive into our impressions of the 2017 Hyundai Elantra Sport, we need to make something clear. This is an all-new Elantra. It has been on the market for over a year with a divergent lineup of sedans: the base SE, the fuel-efficient Eco model, the luxurious Limited, and the Sport sedan. Each one of these Elantras have one thing in common: they continue to entice consumers with an advanced design that is also occupant-friendly and pretty efficient. In fact, the sixth generation Elantra became the big success story for Hyundai in this country and the leading seller for the brand.

Obviously this story is not just about the new Elantra, but adding a new dimension for enthusiasts to this popular car. Let me show you both.

One look at the 2017 Elantra tells you that it is an evolutionary design. It is part of the design language called Fluidic Sculpture 2.0, which continues a lot of the themes from previous generation models and refines them for a larger audience. Not that the previous Elantra was a great design; that car alone sent a lot of manufacturers back to the drawing board. Yet, the new Elantra took the best elements from the last model and gave it some updates that still distinguishes itself from the rest of the pack. The front end now has a pronounced grille with softer lines and a more concentrated headlamp unit. The roofline looks the same, but the glasshouse was tweaked in the rear door with a fixed pane. Same goes with the rear end, which saw larger lighting units and a cleaner trunk lid.

One of the complaints about Fluidic Sculpture 2.0 has been about how “soft” Hyundai’s design has gone. Granted, the sharper lines of the previous Elantra made it a stand-out success. The one argument I would make on the new Elantra would be that it would be seen as more modern and quite attractive.

The Sport model adds a few things, but goes on as a subtle machine; a true wolf in sheep’s clothing, if you will. The 18-inch alloy wheels bring out a premium sports look to the package, as does the specific grille texture and the “Turbo” badging. 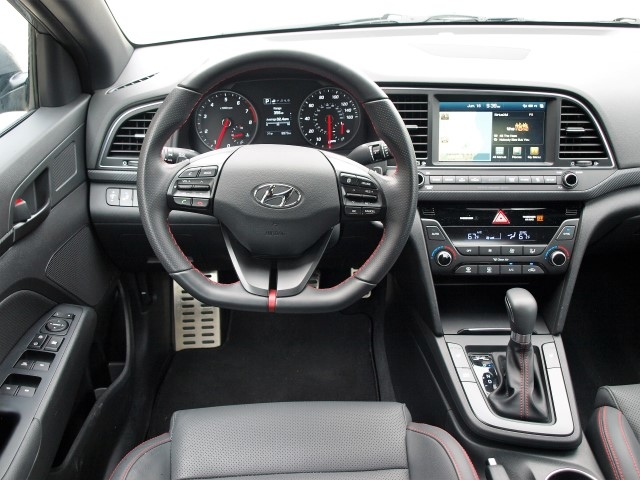 The biggest change from the previous Elantra is in the interior. Based on the current Sonata, gone are the extreme angle shapes seen on the previous Elantra. The entire instrument panel is straightforward with no gimmicks. You can call it conservative, but it actually works better with upgraded switchgear and readouts. That starts with an updated instrument binnacle, with a new TFT screen and a series of new infotainment touch screens, matching the rest of the Hyundai lineup. The steering wheel is smaller, with a thicker rim.

The front seats are a different story. For the Sport, Hyundai went with an aggressive, heavily bolstered front seat with black perforated leather and red stitching. The result is a supportive, firm, but complaint seat for all bodies. Rear seat room has improved with better leg and headroom than the previous generation. The trunk offers 14.4 cubic feet of space, which is expandable by folding down the rear seats for longer items.

Also in the Sport, you do get Apple CarPlay and Android Auto compatibility; the latter works very well with the upgraded 8-inch touch screen infotainment system. There is also Bluetooth connectivity, HD Radio, and SiriusXM onboard. There is a good set of eight Infinity speakers—including a subwoofer—filling the cabin with sound.

If you chose the SE or Limited model, your engine is now upgraded to a naturally aspirated 147-horsepower 2.0-liter four-cylinder unit. The Eco offers a 1.4-liter turbocharged four-cylinder engine with 128 horsepower. On the opposite side of the spectrum, the Sport is powered by a 1.6-liter turbocharged engine with 201 horsepower. If one engine can really make the case for getting an Elantra, it is the latter one. 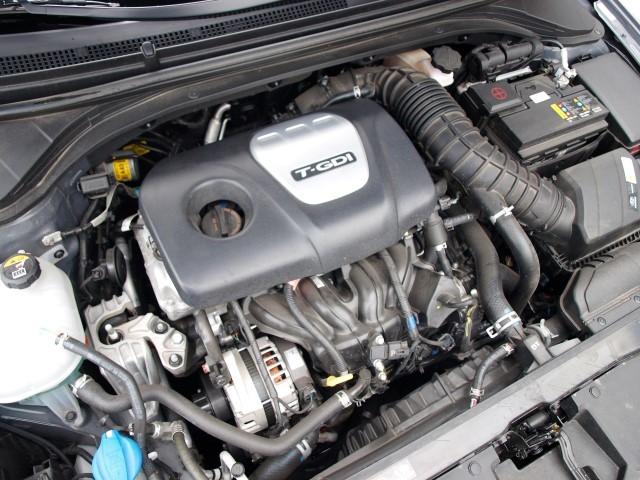 For enthusiasts wanting this Sport model, they can select a six-speed manual transmission or a 7-speed dual-clutch gearbox. Our tester had the superb dual-clutch gearbox. It eventually sends power down to the front wheels. The performance package alone is superb, with the engine offering a lack of turbo lag with aggressive shifts from the dual-clutch transmission. Sport mode ratchets up the shift points for more revs and transitions. Switch it back to Normal mode, and the engine and transmission feel relaxed, but ready to perform when necessary. Plus, if you have an affection for older small sports cars and roadsters, you will love the exhaust note. It reminds me of an old European car, maybe an Opel Kadett or an MGB. Something nostalgic…nostalgic and delightful.

Though it offers superb performance, there is one surprise we found on the Elantra Sport. Our fuel economy average came to 35.3 MPG. The high average we saw was 40.8 MPG. Process this for a moment: these numbers were achieved in a 201-horsepower, turbocharged sporty compact sedan.

The previous Elantra combined good road manners with its balanced ride and solid handling. The ride is certainly smooth and absorbent over bad road surfaces. Choosing the Sport offers a tuned suspension that severely limits lean, roll, and dive. It runs flat through the corners.

In normal mode, the steering feel is on the soft side, but not overly loose. Flip it into Sport mode and it firms up to a perfect feel. Turning is quite good and offers the right road feel in either mode. Braking power is good with superb stops in both normal and panic situations. On the Elantra Sport, you do get blind spot monitoring, a rearview camera, and cross-traffic alert as standard.

The 2017 Elantra lineup starts off with a basic SE model. The base price of that sedan is $17,150 equipped with a manual transmission. Choosing the Sport model will set you back $21,650. Our tester came with a sticker price of $26,110. 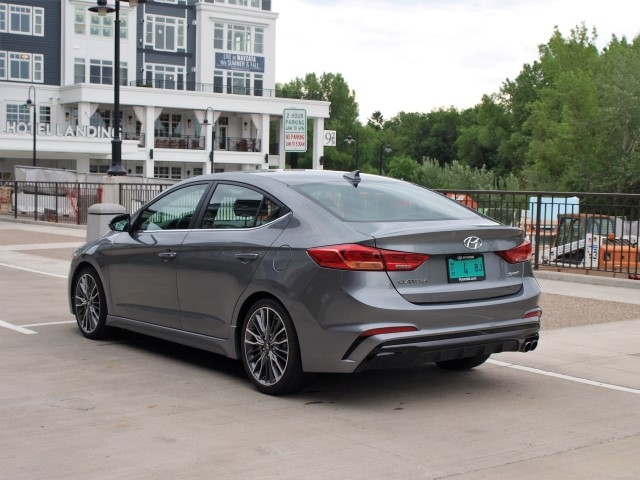 In total, the 2017 Hyundai Elantra is a fine car. It exhibits a lot of progress from previous versions, while maintaining all of the good things that still attract new buyers year after year. The good news is that there are many choices to make this time around, with more to come for the next model year.

However, what should bring people to Hyundai showrooms is the Sport model. Not because it is the proverbial “wolf in sheep’s clothing,” but one that would challenge other sport compacts. That crowd is an illustrious one, including the Volkswagen Golf GTI, Ford Focus ST, Honda Civic Si, Nissan Sentra SR Turbo and NISMO, and any Mazda3 with the larger 2.5-liter engine. That’s good company to keep.

Which brings us to this question: how did the Elantra Sport do on the autocross track? In short, it was as good there as it was on the road. That should be good enough for you to consider one, don’t you agree?