Let us settle an argument, shall we?

Define the word “truck” for a moment. Traditionally, a truck would be best described as a vehicle built on a frame with its body components tacked onto it and the ability to haul items with competence of mass weight. That would describe anything from a pickup truck to a heavy duty tractor-trailer.

However, most manufacturers have a different definition for “truck.” For sales reporting purposes, a “truck” also includes SUVs, crossovers, and sometimes minivans. It appears that this definition holds sway when they talk about sales volume and growth within the segment. 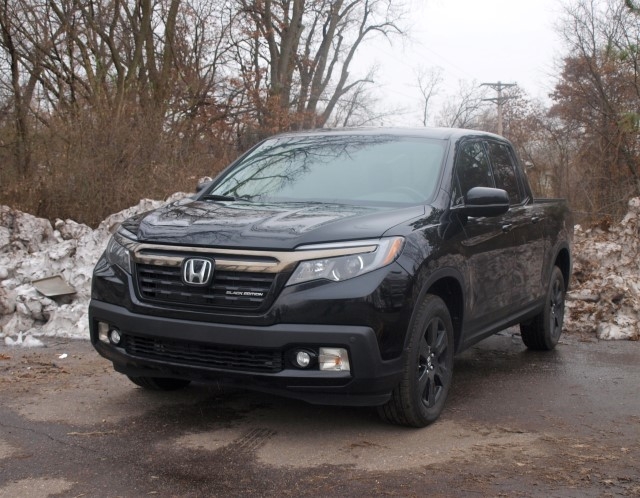 Let us go back to the traditional definition of “truck.” What we have here is the new-for-2017 Honda Ridgeline. It appears to be a pickup truck, which will position itself against the mid-sized rivals of the Toyota Tacoma, Chevrolet Colorado, GMC Canyon, and Nissan Frontier. Most traditional truck people will tell you that it is not a pickup truck, despite having a bed behind the four-door cab. It is because it is (a) built off of a car-based platform and (b) the cab and bed units are integrated into a unit body construction. These two facts are considered blasphemy to traditional truck people.

Here is another thought: we have had car-based “trucks” before. Remember the Chevrolet El Camino and Ford Ranchero? They were based on cars, such as the Ford Torino and Chevrolet Chevelle from that bygone era, but offered the space and utility of a truck bed attached to a single “cab.” Of course, trucks weren’t considered big business back then as they are now. They were sold for commercial purposes. The El Camino and Ranchero were mainly sold for leisure buyers. This was about 45 years ago.

Today, trucks are money-makers. When Honda introduced the Ridgeline for 2016, traditional truck folks laughed at it. However, there were those of us who bought them because they were not as intimidating as traditional trucks and they offered more creature comforts (even in the bed) than their cab/bed/frame counterparts. In fact, I found out that it was a pickup truck that found favor with GLBT customers. Yes, we buy traditional pickup trucks also, but those who bought the Ridgeline liked the friendlier vehicle to use as it offered the right amount of hauling capacity and capability needed to augment our lives.

When the new Ridgeline was being shown, we saw that Honda went with a more traditional pickup truck design. The big question was construction. Lo and behold, Honda retained the unit body construction that traditional truck buyers refuse to accept. In the eyes of the rest of us, it shows that we can have our pickup truck cake and eat it too.

The 2017 Honda Ridgeline shown comes in one configuration: a crew cab with a short bed attached. In fact, all Ridgelines come with the same cab/bed configuration. The Ridgeline shares the same platform as the Honda Pilot SUV. This makes sense as these two vehicles are built on the same Lincoln, Alabama assembly line. 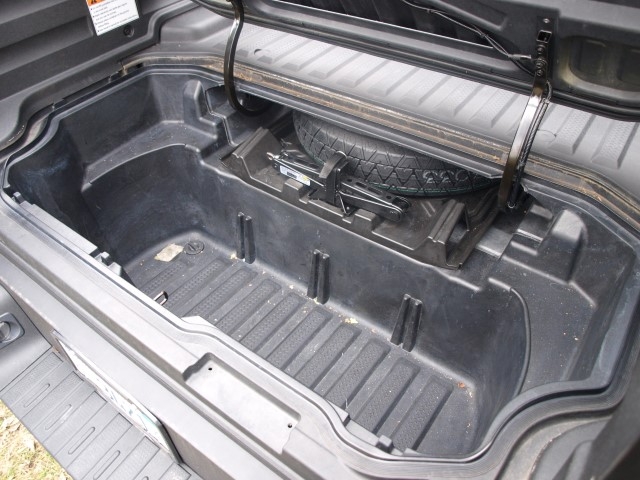 The bed itself measures 64 inches in length with the tailgate up. That measures just about where a lot of “short bed” pickups are. What is unique about the tailgate is the way it opens up, either pulled down or opened off of the side. A latch on the right side of the tailgate can be opened to let it swing open. One unique feature on the Ridgeline is the In-Bed Trunk. It is an extra compartment that can be used to stow tools securely or as an ice chest for a tailgate party. Don’t worry about the latter, since there is a drain plug at the bottom of the “trunk.”

The “cab” part of the Ridgeline shares some of the Pilot’s look. The grille and front bumper are different, distinguishing the Ridgeline from the Pilot. The roofline follows more pickup truck convention with its upright rear window area, leading to the bed. While most mid-sized pickups were shooting for longer, leaner design, the Ridgeline is upright and purposeful; both traits worth looking at, especially in terms of cab accommodations.

Our tester was the top-of-the-line Black Edition. This is the embodiment of attitude, with black paint, wheels, trim, interior and so forth. If this is not your thing, there are six other trim levels to choose from on the Ridgeline.

The Pilot SUV also serves as the basis for the Ridgeline cabin. The instrumentation binnacle is directly out of the Pilot, featuring a digital speedometer, an information screen and two sets of dials off to the side. All of these are easily readable. All of the switches and the entire center stack are also out of the Pilot. This is great for continuity’s sake, but it does evoke mixed reactions, depending on whether they are truck people or not. In all, this setup is very functional, but one must be careful with the plethora of switches below the instrument panel’s beltline. 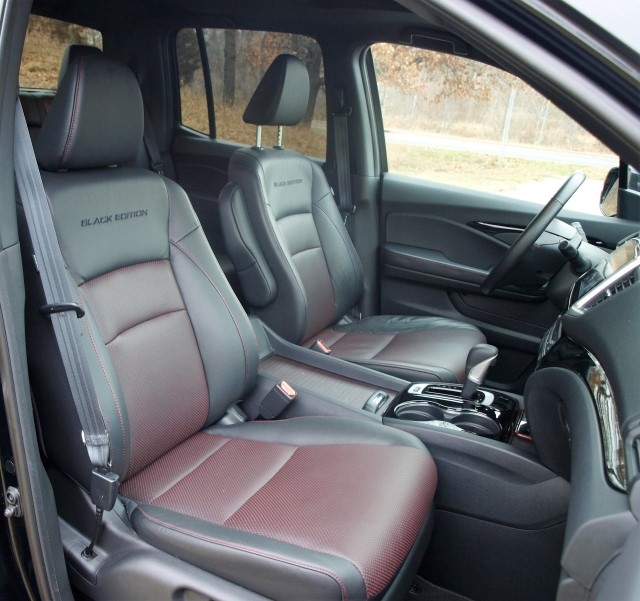 The wide center console works with a rear transmission lever. This is bolstered by some big front seats that offer comfort and some support. In the Black Edition, the perforated leather is accented with red finishes. There are also red accents and backlights all around to match the interior motif. While the front seats offer comfort, there is a great amount of headroom not found on some of the Ridgeline’s mid-sized pickup competitors. Rear seat leg room is OK for average-sized people. Also, the rear doors do not swing wide enough for some people to enter and exit from the back seat. The rear seats can also be lifted up to provide an enclosed cargo hold for a few things.

The infotainment system is standard Honda fare, with HondaLink driving this connected set-up. Apple CarPlay and Android Auto can be connected through one of the USB ports in the cabin, along with Bluetooth connectivity with a smartphone. Using the HondaLink app provides additional app use and a connection to schedule service visits for this pickup. The Ridgeline already offers a set of solid speakers inside the cab, however it also offers a Truck Bed Audio System controlled by a smartphone app. This is not only perfect for parties outside, but for Pride parades, too!

The Ridgeline is powered by the same V6 engine found on some of Honda’s vehicles (including Acura), the 3.5-liter V6 Earth Dreams engine. With 280 horsepower and 262 pound-feet of torque on tap, this slips right into the mid-sized pickup pack for six-cylinder power. The engine runs smooth, just like an SUV or minivan. This engine runs through a six-speed automatic transmission with a choice of front- or all-wheel drive. Our Black Edition tester was equipped with all-wheel drive with Intelligent Traction Management. The latter piece enables the AWD system to switch to Snow, Sand, and Mud modes. 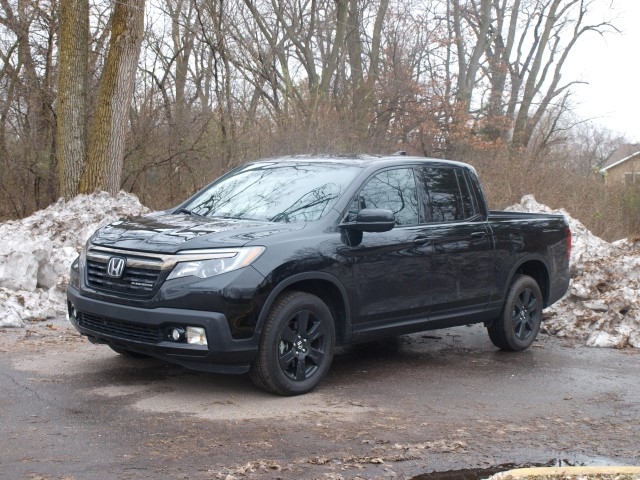 When dealing with a pickup truck, you have to discuss numbers. There are two specific numbers a truck customer must focus on: Payload and Trailer Capacity. The payload number might surprise you: 1,499 pounds of capacity in the small bed out back. This also includes the In-Bed Trunk. Also, the Ridgeline has a maximum towing capacity of 5,000 pounds. In all, this is a 4,599-pound unit body pickup truck that can actually do the job of its mid-sized rivals.

Another important number is fuel economy. In this Ridgeline, we were able to average 20.5 MPG.

One thing we found on the Ridgeline is its driving dynamics. Compared to the Pilot, the lack of an enclosed rear compartment makes the Ridgeline livelier to drive. This will change when you start putting on up to 1,499 pounds of stuff out back. Because of its construction, there is a feeling of stability with the cab and bed conjoined, even with an integral “frame.” The ride quality is good, with some suspension action on bumps and expansion joints. The handling is a bit more controlled with cornering kept to minimal roll and lean action.

Though the steering action is OK, there seems to be a lot of activity from lock-to-lock at the wheel. It does lend to a soft on-center feel and some vagueness felt on turns. Braking is actually quite good, though the pedal feels a bit squishy. The Ridgeline stops very well in normal and panic situations.

For the base Honda Ridgeline RT, pricing starts at $29,475 with front-wheel drive. Our AWD Black Edition tester came with a sticker price of $43,770. For $1,500 less, the RTL-E offers the same equipment level as the Black Edition, but with more colors available, chrome accents, and a not-so-black interior. 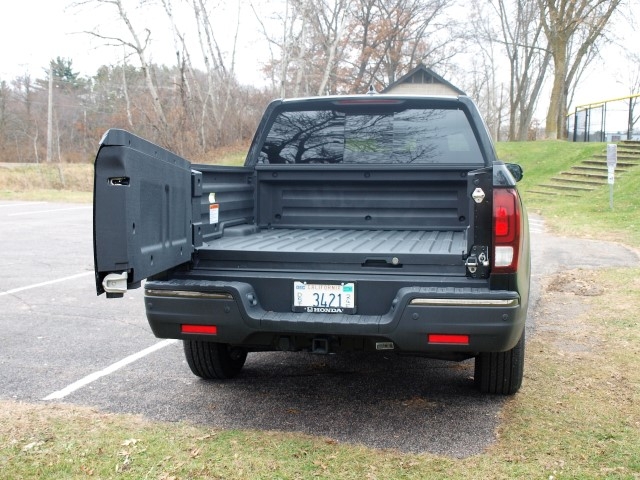 The Honda Ridgeline is an interesting proposition; however, it will not settle the debate whether it is a truck or not. The key numbers are there, with payload that is greater than most mid-sized pickups, a better ride quality, and cab headroom not seen in the latest competitors. It also offers the most useful bed with the trunk and an audio system. These are unique qualities that make the Ridgeline a compelling product for both truck and non-truck customers to consider.

However, one must come to a conclusion. Most truck people would probably not want a Ridgeline. For the rest of us, this could be a solid and fun pickup to use anytime, anywhere.