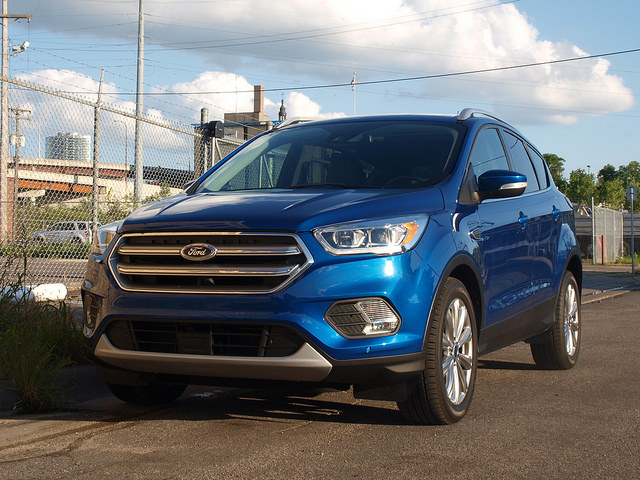 In any automobile, change can help improve the vehicle’s look and/or driving experience. It could be a subtle change to the front bumper or a new set of gauges. It could also be as important as a brand new engine or transmission. Either way, we like to see evolution in the vehicles we drive every day.

When we reviewed the Ford Escape back in 2012, the car went through an extensive overhaul from its Kinetic look right down to the platform and its EcoBoost engines. It took the old boxy Escape we knew and loved to something that was completely different: a design that challenged the eye with no V6 or Hybrid powertrains available.

With this huge change, the transformed Escape became Ford’s second best-selling product in North America, behind the F-Series pickups. Families flocked to the Escape, selling between 20 and 28,000 units per month. In July Escape sales reached its highest since the introduction of the new body style.

The Escape is just for American consumption. This product is sold in almost every market Ford has a presence. Outside of our continent, our Escape is called the Kuga. Just like here, the Kuga is also playing in a heavily contested segment full of compact SUVs on every continent. For the most part, the Escape and Kuga are selling quite well where the segment is the hottest, namely Europe, Australia, and China. 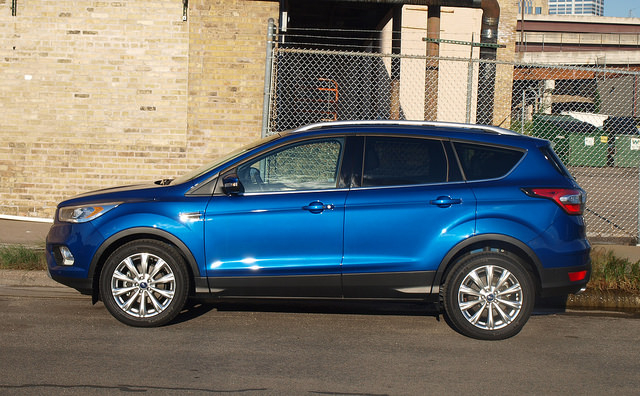 In considering the concept of change, how does one transform and evolve a successful vehicle? Ford might have achieved this quite well in its 2017 Escape.

The first change we saw was in the front clip. This is the global face of the Ford SUV, which began with the larger Edge mid-sized two-row model. It also matches the face of a model that should actually be sold here: the Everest/Endeavor. This vehicle is based on the global ranger platform and has been a success throughout the Asia-Pacific region. Maybe we will get that by 2020.

Back to the Escape, the new front clip includes new integrated LED driving lamps and improved headlamp bulbs for better vision at night. In all, the look is clean and handsome. Ford also worked on the rear end, by scaling down the rear taillights to almost match the ones on the Focus hatchback. Again, the rear end is cleaner than before. The rest of the Escape’s exterior is the same as before, but with better bookends making it a nicer vehicle to look at.

Our tester is the top-of-the-line Titanium, just like our 2013 tester. It came with handsome chrome finished 18-inch alloy wheels wearing Michelin Latitude Tour tires. It is worth mentioning that it wore a gorgeous shade of Lightning Blue metallic. In all, this Escape has been transformed into something that is welcoming to more customers than before. 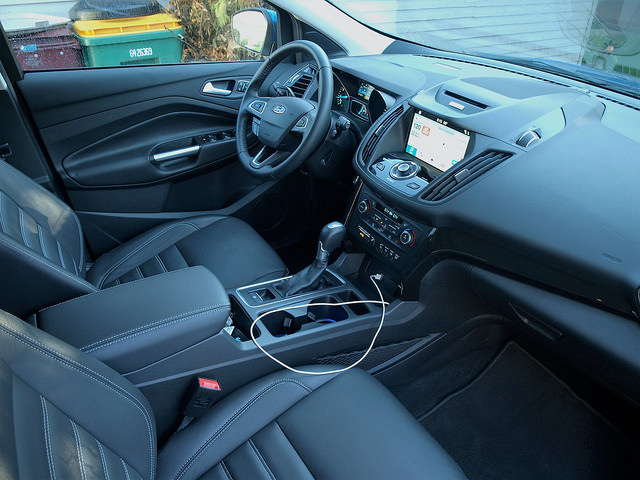 They would also be welcomed by an interior that has not changed as much on the surface, but remains quite functional and tactile. The steering wheel is new, now shared with the Focus and the 2017 Fusion. In fact, this steering wheel has better switches than its predecessor for the information screen, audio, and cruise control. There are other subtle changes in switches and readouts compared to all previous Kinetic-designed Escapes.

The biggest change came a model year before with the introduction of SYNC3. In the past, Microsoft provided the driver for all previous versions of Ford’s infotainment system. The result was a mixed bag of connectivity and disconnection. On paper, SYNC was a great idea. The complaints piled up and Ford responded with a new version. For SYNC3, Ford brought in Blackberry to provide the architecture for a system that is friendlier toward mobile devices. The result is quicker device pairing, better options on screen for apps and navigation use, and a better three-pod touchscreen interface.

There is more to SYNC3. Ford added connectivity to Apple CarPlay and Android Auto for 2017. If you use Apple or Google Maps, this will work well with you. You can also switch back to Ford’s superb navigation system and tuning in its HD radio and SiriusXM channels. Sony provides the output of this system with 10 speakers positioned well throughout the cabin.

Titanium models are upholstered in standard leather. Seating is OK, providing some support and bolstering up front. It does take some time to find the right seating position with the power adjustments available. Rear seat space offers excellent head room for tall passengers, even with reclining seatbacks. Legroom is sufficient for average-sized passengers; however. Cargo space is ample, with 34 cubic feet available with the rear seats up. Once both rear seats fold down, the Escape can carry up to 68 cubic feet of precious cargo. 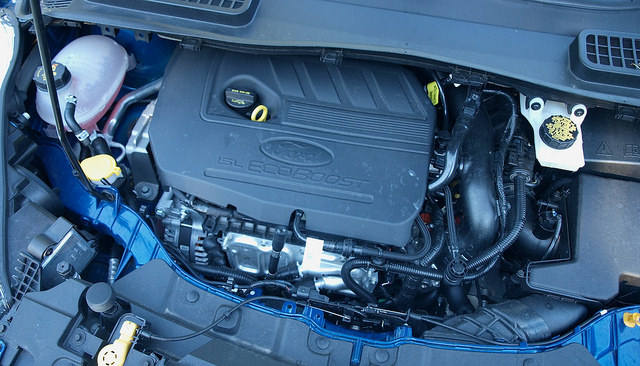 For 2017, Ford offers the Escape a choice of three engines: a 2.5-liter four-cylinder, the EcoBoost 1.5-liter turbocharged four-cylinder, and the larger 2.0-liter EcoBoost engine. We drove the latter in 2012 and found it to deliver great performance with lower fuel economy. Our tester has the newer 1.5-liter EcoBoost engine with 179 horsepower and 177 pound-feet of torque. While this engine matches up well with the Escape’s competitors, it is really one of the best engines in its class with the lack of turbo lag and great throttle response. It is a balanced engine that is truly the Escape’s sweet spot in performance.

Power is delivered to the front wheels only through its solid shifting six-speed automatic transmission in this tester. Four-wheel drive is available, of course. It is the best choice to make in our part of the world. In terms of fuel economy, it averaged 24.2 MPG.

The Escape does ride high, but quite smoothly. It does its best it absorb bumps and cracks on the road. Cornering yields a bit of roll and lean, but not enough to cause alarm. That is, unless you hit its limits and beyond. Steering is OK, with a soft on-center feel and solid turning radius. Steering wheel action is a bit on the numb side, but it can respond well when necessary. Brakes are very good with solid stops in normal and panic situations.

Our tester came with a host of active safety features, which truly work in the Escape. Adaptive Cruise Control is complemented by a Forward Collision system. Lane Departure mitigation also works well with steering assist; however, I found that the passenger-side Blind Spot Monitoring warning could not be seen well in certain daylight situations. This Escape did come with Enhanced Park Assist, which helps in parallel and perpendicular parking for those of us who do not trust our own parking skills. To round everything up, this tester had a backup camera with reverse sensing and additional parking and motion sensors that checks the vehicle all around for obstructions. 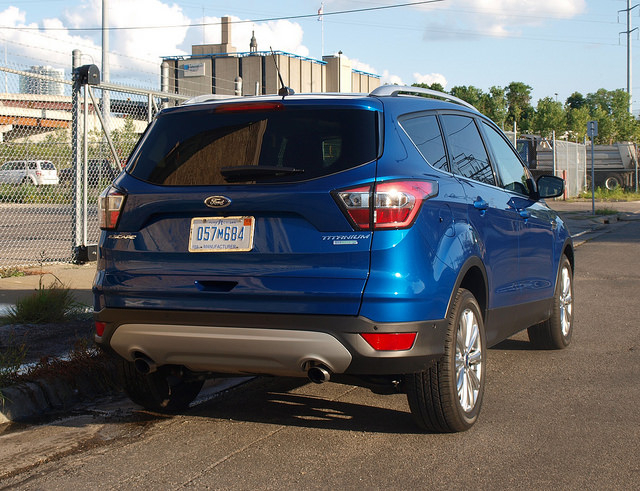 A basic 2017 Ford Escape S with front wheel drive is available with a base price of $23,600. Our front-drive Titanium tester arrived with a sticker price of $34,875. Adding four-wheel drive will add another $1,750 to the bill, while the more powerful 2.0-liter EcoBoost engine is another $1,295 on top of that.

Just like at the end of 2012, the Ford Escape remains a solid choice for consumers looking for something different among compact SUVs. The 2017 version gives this strong selling vehicle looks that are easier on the eyes and better technology that is useful in every occasion. But, is it the best in the class? According to Cars.com, their recent comparison of the top contenders in the class put it first above the rest. According to us, it is a stronger contender than before in a highly competitive segment.

Making changes to a vehicle can help its cause. This is truly the case of the 2017 Ford Escape. Therefore, change is always good, indeed.