There has been a lot of talk about Volvo lately. 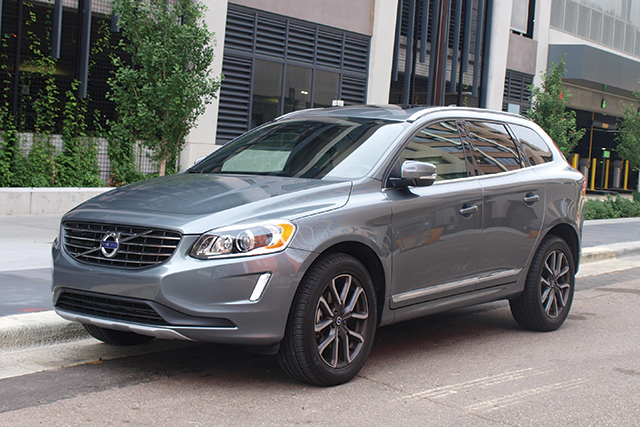 From an ebb that almost threatened the car maker’s existence, sales have turned around on the basis of new and exciting products. The XC90 SUV earned its share of kudos for 2016, namely the North American Truck/Utility of the Year, along with nods from Motor Trend and the Texas Auto Writers Association. The trophy case in Gothenburg, Sweden has never been full in its history.

The next wave of new Volvos is set to arrive within the next few months. The S90 flagship sedan and the V90 wagon will join the XC90 as the latest focal points for the brand. Early word on these two new vehicles has been extremely positive, even calling them true rivals to established luxury models in the same class.

Lavender magazine has been part of the conversation. Last year, we reviewed the Volvo S60, followed up by the S60 Inscription earlier this year. Both vehicles have been on the forefront of a turnaround for Volvo that enabled the Chinese-owned Swedish automaker to go forward with its future plans worldwide.

However, if you study Volvo’s sales numbers, you will find something that is both interesting and quite expected. While the XC90 has won its share of accolades, it has sparked the sales rebound at Volvo. Yet, it is not the volume seller as you might think it should be. The S60, along with the long-wheelbase Inscription and Cross Country models, also saw sales rebounds. Yet, it has not been the model being pushed out of their showrooms at great volumes.

The truth is that another SUV is the one sparking sales at Volvo here and elsewhere. It is true with almost every car brand these days; crossovers remain the biggest driver of sales overall. Again, we are not talking about the award-winning XC90 here. We are talking about a product that has been around for quite some time and seen in great numbers everywhere we drive. 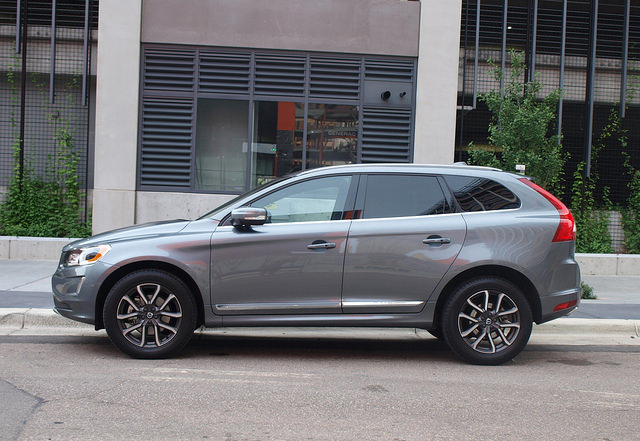 The Volvo XC60 is a common sight throughout our readership area. They are standard bearers in various neighborhoods from South Minneapolis to Wayzata, Blaine to Stillwater. XC60s pop up just about everywhere, it seems.

There is something about being popular. So, we were curious as to why the venerable XC60, and not the newer and flashier XC90, is Volvo’s best-selling vehicle worldwide today.

First off, the XC90 plays on a different level than the XC60, due to its higher price point and size. Whereas, the XC60 is right in competition with some of the hottest vehicles in its class (the BMW X3, Audi Q5, and Cadillac XT5) its size is perfect for its owners, usually parents or couples with pets, activities and lives outside of work. This is why you see a lot of them around here.

The XC60 is a handsome vehicle. Admirable is another term for it. This one sits tall with a proper ride height for an SUV. The recently updated “wide grille” look helps the XC60 by keeping it fresh. The silhouette sweeps back to an angular rear end framed by tall taillight assemblies and a wide tailgate. It is a signature Volvo look that has attracted its owners for the past eight years. 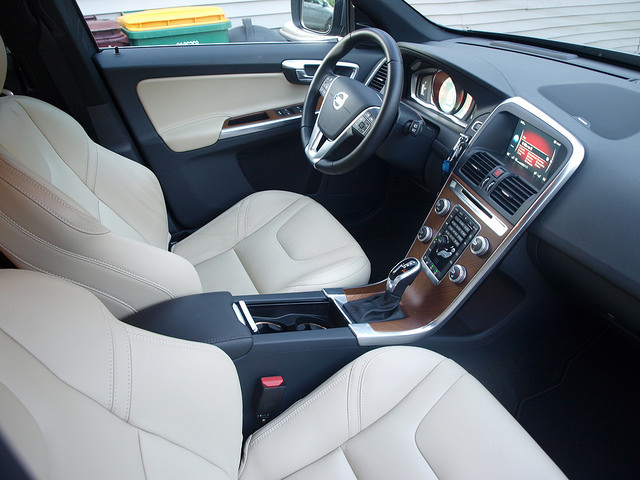 As much as we were excited about the transformation of Volvo’s interiors in the XC90, there is really nothing wrong with the XC60’s cabin. It simply works, with its keypad arrangement below the Sensus screen, the switchable instrumentation binnacle and Volvo’s familiar controls.

This XC60 came with “contour” seats with plenty of bolstering and support. Even with the durable hide, the cushion lacked the deep bolstering found on the seat backs. However, the entire cabin is spacious, even in the second row. Headroom is high, which means adults will find a good seating position inside the XC60. Cargo space is expansive stretching out to 67.4 cubic feet with the rear seat backs down. The cargo area includes a cargo divider and an underfloor storage area.

Sensus is the name for Volvo’s infotainment system. It is quite extensive, including media playback, HD Radio, SiriusXM, app playback, and a modem. It is not touch screen controlled, but rather by the knobs and buttons below the screen. Once you master it, it is quite good to work with. HarmanKardon provided beautiful sound throughout the cabin. 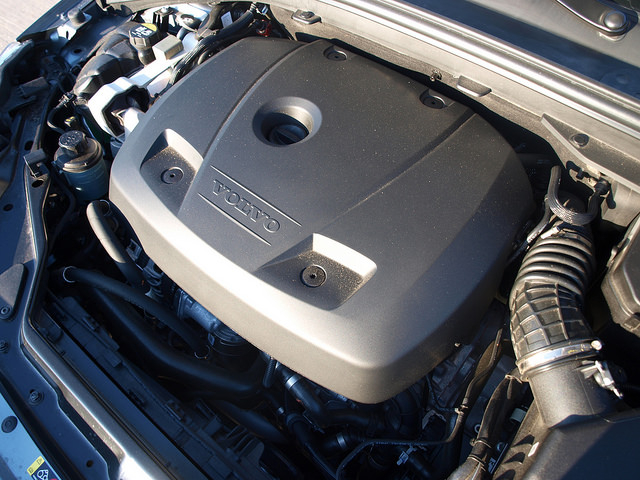 The current XC60 offers three engines. The T5 front-wheel drive model has the 240 horsepower 2.0-liter Drive-E turbocharged four-cylinder engine. Selecting the T5 with all-wheel drive bumps the engine up to the tried-and-true 2.5-liter turbocharged in-line five-cylinder with 250 horsepower on tap. However, our T6 tester comes with only one engine choice regardless of whether it has front- or all-wheel drive. Underneath our tester’s hood is a 302-horsepower 2.0-liter turbocharged and supercharged four-cylinder Drive-E engine. There is only one word that can describe this engine: perfect.

Perfect? If you combine this engine with the smooth-shifting and responsive eight-speed automatic transmission and a very good all-wheel drive system, you have a quick, fast, and powerful SUV on your hands. There is no lag from either the supercharger or the turbocharger upon even hard throttle response. Fuel economy is about par for its size and class. We averaged 22.1 MPG in our care.

In driving the XC60, there are definitely some elements of familiarity with other crossovers and SUVs that it exhibited. There is a pronounced “tall” ride equal to its ride height and ground clearance. The ride is not as floaty or bouncy, but very controlled, which is what one should expect from a vehicle of its type. Handling does fall on the soft side with some roll and lean when pushed.

Turning the XC60 offers some tight maneuvering with a quick and responsive steering set. Steering response appears to be numb, although on-center feel has a bit of looseness to it. Otherwise, it is a solid steering system designed to get out of trouble quickly. That is the same for the braking system, with a strong pedal feel and response. Stops are solid in both normal and panic situations. 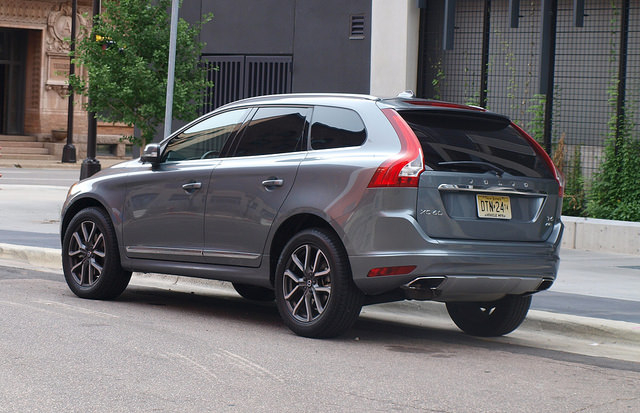 It is not a Volvo without the ultimate in safety engineering and technology. This starts with the XC60’s Intellisafe system, which includes advanced active safety features such as the Blind Spot Information System, City Safety automatic front braking, adaptive cruise control, and so forth. The point being is the XC60 continues to provide its occupants a safe place to be in any incident. As a result, the XC60 won the Insurance Institute for Highway Safety’s Top Safety Pick Plus award for 2016.

Pricing for the Volvo XC60 starts out at $36,600. Our tester, which included the Platinum package, came with a sticker price of $52,605. In the premium SUV realm, this is about right for such a vehicle with its equipment level.

As Volvo’s best seller, the XC60 is quite competitive against its rivals. The advantages of advanced safety and solid design are main attractions to this SUV. Yet, consumers yearn for a simplified infotainment system and maybe some better road manners. They would be missing the point of the XC60. This Volvo is favored because it is the safest and perhaps the nicest finished vehicle in its class.

Volvo is in a transformative period in their history. Though the attention is spent on more expensive and advanced designed vehicles, such as the award-winning XC90 and the upcoming S90 and V90, their bread and butter lies with the XC60. It is a vehicle with which you simply cannot go wrong. That is worth keeping the conversation going.