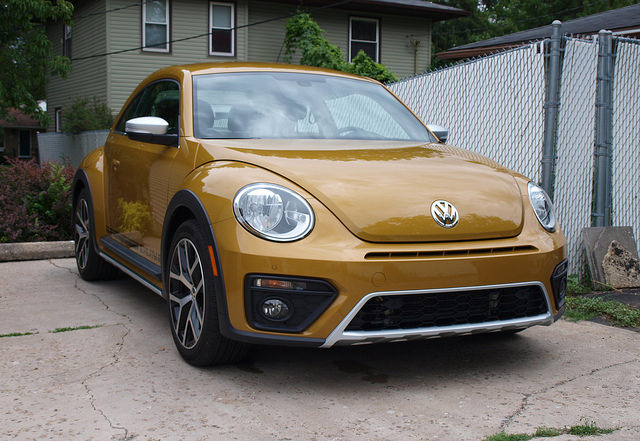 We, as a culture and community, always like being different.

It might not be the case all of the time, but there are plenty of things that differentiate us from everyone else. We always found ourselves standing out in the way we dress, furnish our homes, tend to our properties, the music we listen to, and the celebrities we adore.

In recent years, we have seen the lines blurred. Our tastes in clothing, music, furnishings, and now automobiles are being shared with everyone else. Is that a good thing? Maybe.

Perhaps that works well with a society finding equity among all of us. Then again, will that take away our own distinction within society at large? Or, does it?

Since its arrival in 1949, Volkswagen has always been different. The original “Beetle” arrived as something of a curiosity. Yet, its popularity made it into an icon. The original car had its engine in the rear, cooled by air, and was not as fast as the average American car. It’s shape never changed, though the final “sedan” was sold in the USA by 1977. The convertible remained in this market through 1979.

VW resurrected the Beetle for 1999. It may have been shaped the same as its previous iteration, but the chassis is completely different. The front-engined, water-cooled and front-drive Golf provided the platform for this New Beetle. At first, they were popular. The New Beetle even found favor with our own community.

In fact, you named the Beetle one of your favorite vehicles back in 2012 in this magazine.

It was cute. Very cute. But, not a lot of people took it seriously. Sales waned through its final year of sale in 2010. VW understood that the Beetle may have been different, but it needed a bit more massaging and, perhaps, some purpose for the brand. The 2012 Beetle arrived with a shape that was a bit more trim and muscular. It exhibited all of the signs of a Beetle, along with its front-drive, front-engine platform, but it was seen as a balanced vehicle that could be sold as a two-door to customers looking for such a vehicle.

The Beetle is still around. For 2016, VW introduced a couple of special editions to help expand its purpose toward customers. There is a Denim convertible version that reminds one of the 1970s. 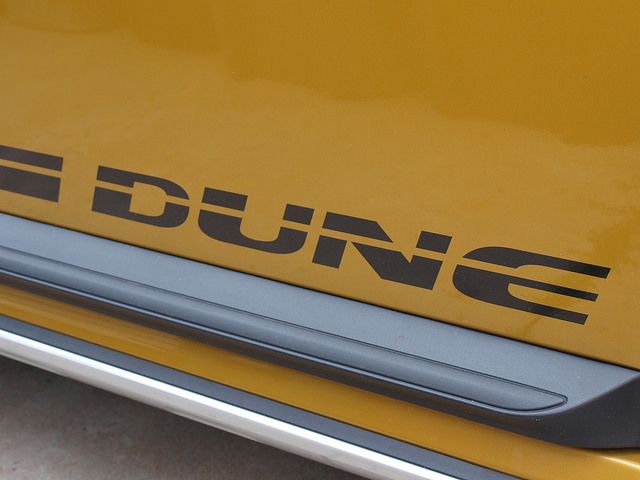 Then, there is this Dune model. It is another take on another part of the Beetle’s heritage: the Baja Bug and the Dune Buggy. Both vehicles were an extension of the Beetle’s legend in the 1960s and ’70s. To pay homage to them, VW came up with a sporty special edition, including a front bumper with a skid plate, a rear wing, and a lifted ride height.

First off, we must address the Beetle’s basic shape. Compared to the last New Beetle, the overall theme was to retain all of the classic design elements of the car and make it masculine. That was the word being used by other journalists to describe this current Beetle. However, let’s just use aggressive instead. The roofline was flattened and the overall height was lowered. The hood was also flattened and appeared longer than even the old Beetles of decades past. Instead of mimicking the old “sedan” of rear-engined era, Volkswagen shaped the Beetle to become more of a coupe with an eye on other affordable models, such as the Hyundai Veloster and the latest Honda Civic 2-door.

Compared to the rest of the Beetle lineup, the Dune certainly takes the standout design of this car to another level. The enhancements on the Dune actually work. It gives the Beetle a certain flair, even with its model-exclusive Sandstorm Yellow paint job, rear spoiler, black wheel arches, front bumper, and striping. In all, the Dune package is a head-turning ride that exudes personality and fun. 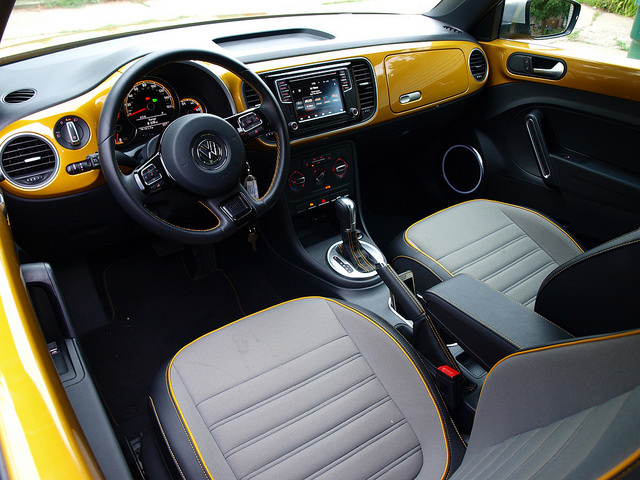 That theme continues inside of the Beetle Dune. Again, the notion of the Beetle being more aggressive (and masculine) continues with the evolution of the interior. Having the color-keyed elements on the dashboard and door panels are a direct paean to its rear-engined ancestors. It actually works with the integration of a three-dial instrument binnacle that is easy to read and reference. A custom digital information center finishes off the binnacle well. It also enables a high position for the new touch screen for the MIB II infotainment system and retains a lot of the Volkswagen-specific dials and switchgear throughout the instrument panel and steering wheel. However, some switches and stalks may be on the older design side, which are often frustrating to non-Volkswagen drivers. For those of us familiar with the brand’s products, we know the drill and appreciate them for their functions.

Seating is best described as “just right.” The front seats fit people like a glove with great comfort and bolstering all around. Manual controls for rake, recline, height, and lumbar support are simple to use and it is easy to get the right seating position behind the wheel. For adults, the rear seats are indeed a challenge, although access to the back is easy. Legroom is at a premium at above-average sized adults. Cargo space is good, even with the rear seats up and the cargo cover on. There is a lower floor for storage, but the hatch is very large and wide for making loading and unloading easy.

What is this MIB II infotainment system I mentioned earlier? It is not a take on the Will Smith-Tommy Lee Jones series of films. Volkswagen knew it had to raise the ante on infotainment systems, therefore they introduced a trio of them for most of their lineup. The key to this system is full smartphone compatibility. While most vehicles offer just Apple CarPlay, Volkswagen can also pair with Android Auto and MirrorLink. With three AppConnect options, it is easy to plug, swipe, and integrate while on the road. You can still use Bluetooth to connect for phone functionality and music file playback. The sound quality of the standard audio speaker system is very good, as well.

What the Dune adds inside is additional flair within the theme. The trim reflects the Sandstorm Yellow motif with black and gray added. In all, the entire cabin looks really, really cool. 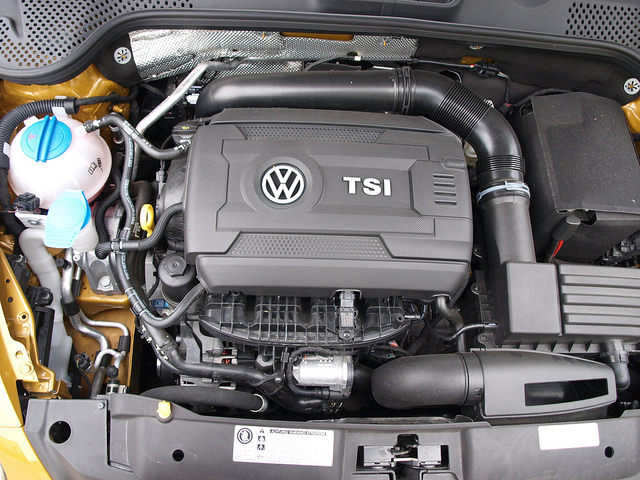 There is only one engine/transmission combination available on the Beetle Dune. The 1.8-liter turbocharged four-cylinder engine has 170 horsepower on tap with 184 pound-feet of torque. Combined with its six-speed automatic transmission, the Beetle Dune drives very well. Acceleration is solid and the shifts are smooth. This driveline sends power only to the front wheels. As for fuel economy, we have averaged 28.9 MPG in our care, just a bit over the average posted on the sticker.

What makes the Dune unique is its ride height compared to other Beetle models. Most of it comes from its Continental 235/45R18 all-season tires and unique Canyon alloy wheels. Behind this wheel/tire combination is 0.4-inch increase in ride height, with an extended width of just 0.6 inches. Sometimes when there is an increase in ride height, there would be some issues with driving dynamics. Actually, there wasn’t. When pushed on country roads, the Beetle Dune rode near-flat through the corners, while absorbing the cracks and imperfections on the road. The ride quality is very good and the handling is fantastic.

The steering is very responsive. Turns are sharper and on-center feel is on point. The brakes are also good, with excellent pedal feel and solid stopping power. Both normal and panic stops resulted with a confident feel and feedback all around.

The Beetle Dune has a base price of $23,559. Our example came with a complete sticker price of $25,065 with the only option being the Sandstorm Yellow paint. The Dune also comes in a convertible. If you wish to get just a Beetle, pricing starts at $19,795 for a 1.8T S model with an automatic transmission. For those wanting to row their own gears, step up to the SE model with a five-speed manual gearbox.

You can get the Beetle with a version of the GTI’s 210-horsepower 2.0-liter turbocharged engine in the R-Line models, starting at $25,995, choosing between a six-speed manual and the DSG gearbox. For the top-down experience, Beetle convertibles start at $25,490. Whichever Beetle you choose, it will be a unique and fun experience to be had. 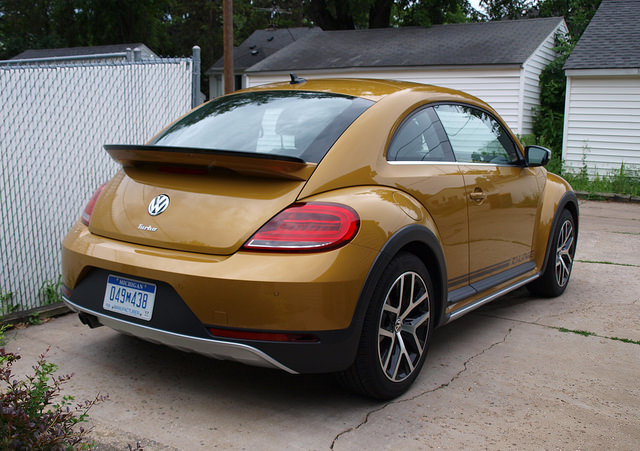 Originally, the Dune was supposed to be a limited edition for 2016 only; however, it has garnered plenty of interest since its first showing as a concept a few years ago. Therefore, the Beetle Dune coupe and convertible will be available for the 2017 model year. For 2017, there will be another limited edition Beetle available for those wanting more of a different personality: the #PinkBeetle.

Our community loves the Beetle. We always have. Today’s Beetle was designed to be different from the rest, which was achieved quite nicely. With the Dune model, the added element of the appearance kit and outward personality provided another layer of, for lack of a better word, fun. A chewing gum advertisement once touted their product as “double the fun,” which is quite apt to describe for the Volkswagen Beetle Dune.