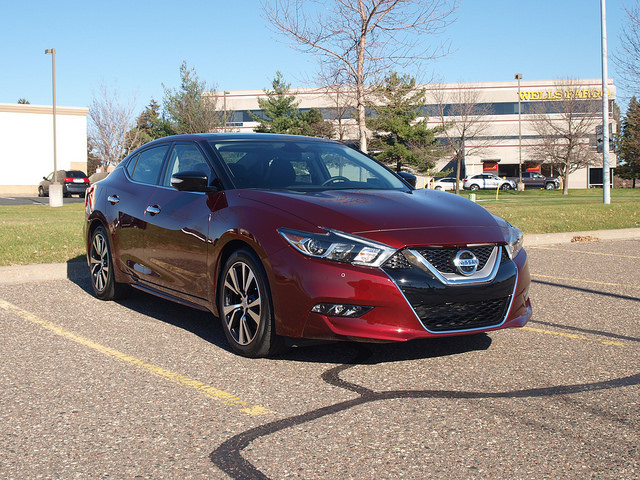 In 1988, Nissan introduced what they called the “Four-Door Sports Car.”

That car (the 1989 Nissan Maxima SE) changed Nissan’s fortunes at a time when they were known for reliable cars and trucks with lackluster styling. The Maxima looked like a sports sedan and had the swagger to match. The SE model was available with a manual transmission, sports-tuned suspension, and supportive seats. This particular model was the darling of enthusiasts who were not able to afford the finest cars of that time.

Since then, the big Maxima sedan had its share of ups and downs. Some would say that it had an identity crisis over the years. While it tried to regain its “4DSC” grandeur, it was also playing in a segment that was on the downslide. It seemed that no one wanted a sporty, V6-powered, front-wheel drive big sedan with a Continuously Variable Transmission connected to it. Not one that billed itself as a “Four-Door Sports Car.”

Sales of the Maxima were semi-existent in the last several years. The entire segment has been losing favor with young buyers, including the Chevrolet Impala, Toyota Avalon, Ford Taurus, and so forth. It got to the point when Nissan considered dropping the Maxima for good.

Then, they had a change of heart. For Nissan to sell another Maxima, it had to be one that would be provocative enough to apply the “4DSC” moniker again. It would also be aspirational for premium buyers, while competing with the likes of the Dodge Charger, Chrysler 300, and the rest of the big car brigade. In all, it would have to be something really special. 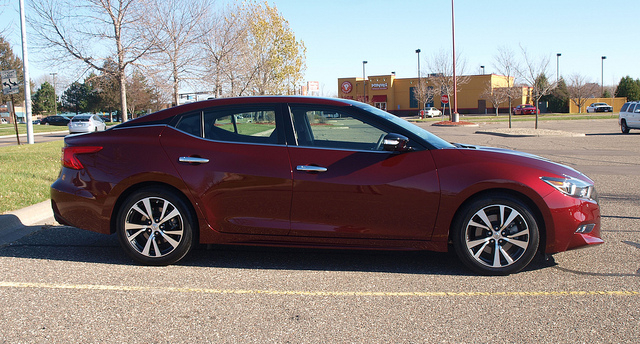 For 2016, Nissan presented its eighth generation Maxima. The hype was matched with plenty of praise by my fellow members of the automotive media. Well, I finally got a hold of one to see if Nissan was right to keep the Maxima in the lineup. All I want to know is whether the spirit of the 1989 Maxima SE was recaptured in this new version.

The 1989 Maxima changed the look of Nissan at the time: rounded, taut, and focused. This 2016 edition carried on some of the latest cues seen in the Murano crossover to create a long, short, and lean big sedan. The front end represents the latest in Nissan’s design concepts, with a three-dimensional grille, accented with chrome surrounds in the “V” crowning the front end. Angular shapes (including the LED lamps, the remaining headlight units, and the creases) highlight a front end that has snapped a few necks upon seeing it. This leads to a sleek silhouette with curves and angles forging a folded profile all the way to the rear. The same angular design and chrome accenting pervades in the rear, including a pair of wide wraparound tail lamp units.

The roofline is low. One might say it could be coupe-like. The doors have great angular shapes, leading to a C-pillar appliqué that melds the top and bottom of the glasshouse down to the fender. This emulates the Murano’s own C-pillar design and creates a dramatic effect to the entire profile. On this platinum model, eighteen-inch machine finished aluminum flat-spoked wheels round out a car that is both aggressive and luxurious at the same time. 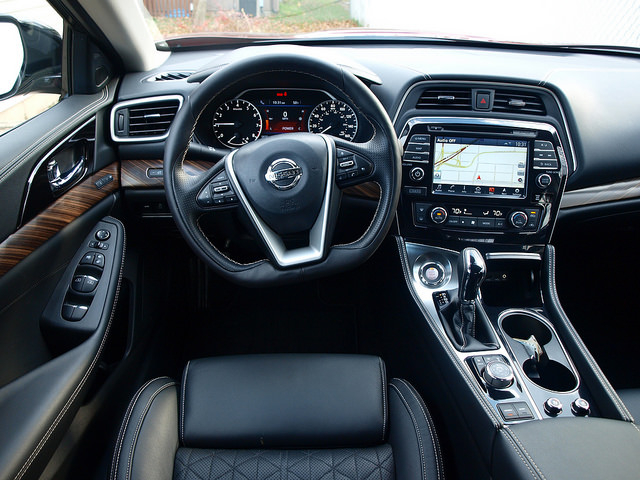 The concept of today’s “Four-Door Sports Car” truly comes to life when stepping inside the Maxima. Because the roofline is low, so is interior height. That creates a “sports car” effect, from the placement of the ignition button on the console to the instrument cluster. Between two decently sized dials is a TFT screen that has a choice of screens to gauge the vehicle’s health, trip, and fuel consumption information. These readouts fit in the steering wheel opening, which in itself is all new. The buttons and switches on the steering wheel are the best Nissan has ever presented with great touch points all around. In all, switches have improved throughout the Maxima’s cabin with great placement.

In the platinum, an eight-inch touch screen dominates the center stack. NissanConnect now drives the system, which includes SiriusXM traffic and weather reporting, customizable alerts for parents of driving-age children for curfew and speed issues, remote access to the vehicle, automatic collision notification, and theft tracking, to name a few. All it takes is a Bluetooth connection and an app on your smartphone to make it all work. The infotainment system also plays back music files from your phone, takes your phone calls, and offers SiriusXM and HD Radio broadcasts and very good mapping. A knob on the console also controls the infotainment system, in particular the mapping and navigation. Bose supplies eleven speakers for a good sounding cabin.

In the platinum, seating is adorned by quilted leather upholstery. Front positions offer power adjustment for both the driver and passenger, which includes lumbar support with memory adjustment for the driver. The driver also gets a manual thigh adjustment and deep bolsters in the cushion and backrest. They are comfortable and supportive, though tall drivers may have to drop the seat low to clear the panoramic roof. The front seats could be heated and cooled, and the driver gets a heated steering wheel. There is enough legroom for everyone in the back, but headroom is limited for anyone above six-feet tall. The head will get tucked away in a space between the panoramic roof and the rear glass. 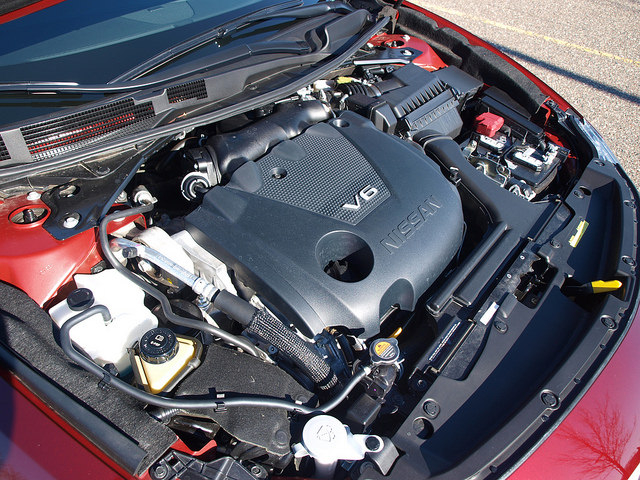 If there is a huge highlight in the 2016 Maxima, it is the updated VQ35 V6 engine. This award-winning engine is one of the best in the business. Nissan massaged this engine further, resulting in an output of 300 horsepower and 261 pound-feet of torque. This engine delivers smooth power that is also wonderfully quick. Power from the V6 is filtered through the Xtronic Continuously Variable Transmission. It is improved from the last generation, yet there seems to be a lack of real transmission feel and feedback when it goes through the “ratios.” In truth, this V6 is better suited with a geared-type of automatic transmission. Enthusiasts would rather want a manual gearbox to match its “Four-Door Sports Car” moniker, just like the original 1989 Maxima SE. There is a Sport mode available for more aggressive “shifts,” though the CVT felt happier in Normal mode. The front wheels drive this 3,593-pound sedan.

Driving the Maxima meant having one of the smoothest rides in its class. Even on bumpier roads, the Maxima’s suspension absorbed it well for minimal feel and feedback through the cabin. The car is also quiet, thanks to active noise canceling. In the platinum, handling tended to be softer with some lean through the turns, though it is quite composed on the road. For better handling, it is suggested to check out the SR model, below the platinum. The SR is a dedicated sportier version that features an Integrated Dynamics-control Module with Active Ride Control, Active Trace Control and Active Engine Brake. In all, this is the one that would drive the way a “Four-Door Sports Car” should.

The electric steering system is very good, with a heavier weight than found in its class. This is a good thing, as it offers solid feel and control at the wheel. The turning radius is good for its size and on-center feel is excellent. Braking tended to be soft at the pedal, though stopping is good in panic and normal situations. The platinum also has active cruise control with distance adjustment, driver attention alert, blind spot monitoring, rear cross traffic alert, moving object detection, and an around-view mirror with a full 360-degree view of the car coming through the infotainment screen. The platinum model also has front collision warning with emergency braking, as sensed from a front monitor. 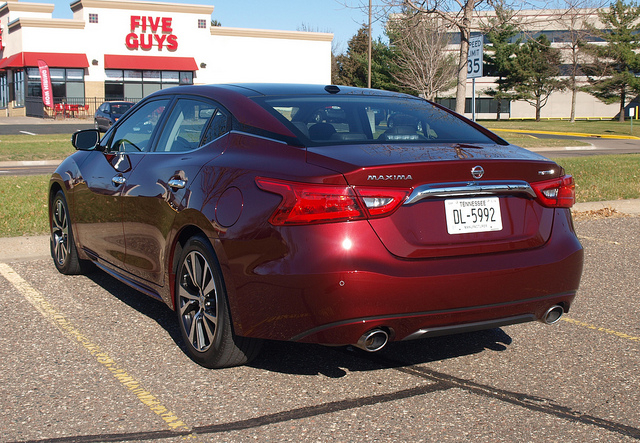 Being a big car, the Maxima was designed to attain the best fuel economy in its class, with an estimated 30 MPG on the highway. In our testing, the Maxima averaged 24.3 MPG. This appears to be normal for the class.

For almost eliminating their big sedan, Nissan did pull off a Maxima that is edgy in design, with a paean to its “Four-Door Sports Car” roots. Though one would argue that it falls short in the “4DSC” promise, missing a few key elements that would match that moniker. For being a full-sized car with premium aspirations, it fits that bill nicely.

Perhaps it does not have to be a replica of the game-changing 1989 Nissan Maxima SE. It simply needs to be a solid big car with good road manners and a nice feel all around. That is perhaps good enough for Nissan.