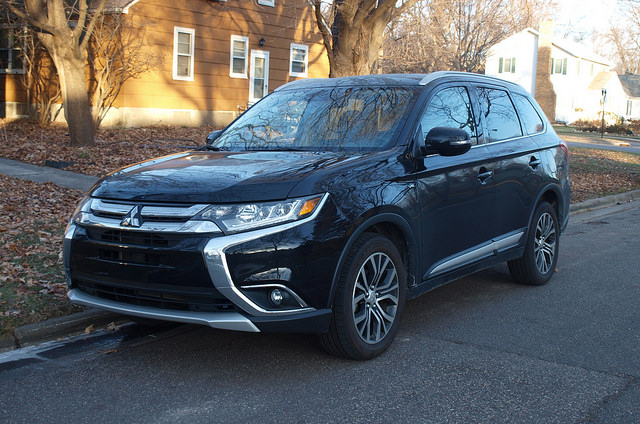 Last April, Mitsubishi made a big deal about their 2016 Outlander.

In its third year in its current body, the folks at Mitsubishi told us that they made about 100 or so improvements to this crossover, most of which we will never see. We did see the first integration of the “Dynamic Shield” brand language that will be seen on all models soon enough; however, there were other improvements — sound deadening, ride quality, and overall driving dynamics — that Mitsubishi made to the Outlander.

For someone who goes through 40–60 vehicles a year to evaluate and write about, I’ve heard, seen, and felt it all. A company can claim they have the best of some sort of ride quality. Sometimes, it is proven. Otherwise, I would feel let down. I might like what they’ve done to the nose, while I would question the motivation in doing so.

The truth is that I have to be critical. I only ask the people providing these vehicles for me to present to you that they show me how they arrive at this claim or that change. In the end, you might buy it. That is what the manufacturers ultimately want: a customer for life. 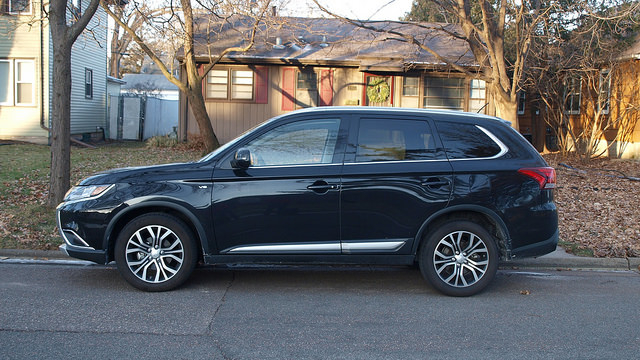 So, how do we know if these claims are substantiated? I had to drive the 2016 Mitsubishi Outlander to see for myself.

My particular Outlander was the V6-powered GT model with Super-All Wheel Control (S-AWC). In Mitsubishi-speak, it is the all-wheel drive model that sits on the top of the line. Due to other changes across the brand, it is the most expensive Mitsubishi offered in America.

The new “Dynamic Shield” design language is well integrated into this three-year-old body. We probably wondered why they didn’t do this sooner. The Outlander now has personality. It looks more interesting and very upmarket. It is about time!

The rest of the Outlander remains the same. Large, wide opening doors for everyone to climb on board, even third row passengers. The tailgate opens wide and tall to make loading and unloading easier. 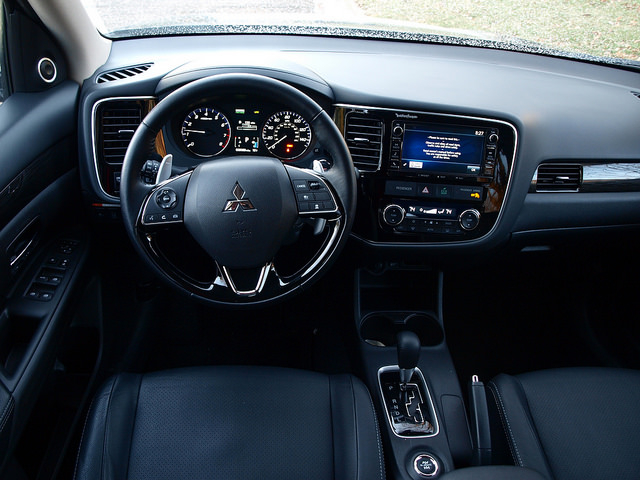 From the original 2014 model, only a few changes were made in the cabin. The instrumentation is straightforward with a comprehensive cluster of dials and a small center TFT screen for trip information, fuel, and temperature gauges. The sightlines are lower, but quite good overall. The audio system is at a high position for a quick glance, augmented by redundant controls on the steering wheel. Cruise control, along with adjustable distance sensing, appear on the steering wheel. With paddle shifters mounted on the column and logical stalk controls, Outlander drivers have a lot at the tips of their fingers to make driving pleasurable.

Front seating is huge. Many bodies will find comfort with mild bolstering on the cushion and seatback. The GT S-AWC tester I had in for review offered black leather seating that feels upmarket and soft enough for comfort. Second row seat room is another story. The seats are multi-adjustable with an improved third row access for its large rear doors. That also means that the second row can be adjusted for leg room and recline. Third row space is possible for adults, only if no one sits in the second row. Otherwise, the third row is more designed for children, or simply folded down for better cargo utilization.

Two engines continue to power the Outlander. Most models get the 2.4-liter four-cylinder engine with 166 horsepower on tap. This GT tester gets the 3.0-liter V6 engine with 224 horsepower. Though you get better fuel economy with the four-cylinder, the V6 offers a bit more grunt to tow up to 3,500 pounds, which is exactly the weight of this Outlander GT. The big attraction to the Mitsubishi is its lighter weight compared to its competition. While most V6s are running with higher performance numbers, the Outlander is suitable for the job it has to do. Though I would prefer more performance from the V6, I will take the fuel consumption average of 21.7 MPG that I achieved in it. 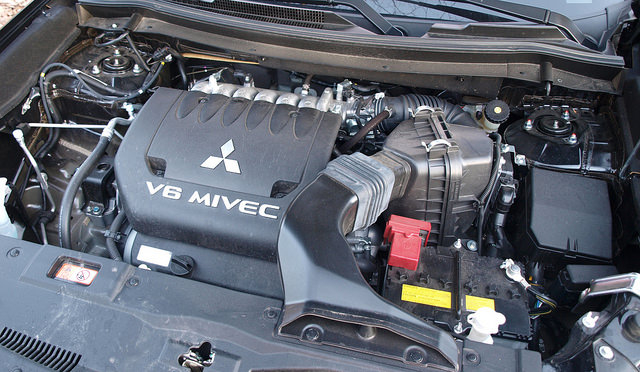 The V6 is also a better choice, thanks to the combination of a a true six-speed automatic transmission and its Super All-Wheel Control (S-AWC) system. Thanks to a switch in the console, there are a few modes for the all-wheel drive system to work in. In snowy and icy conditions, “Snow” mode is fine, but “Lock” offers the best traction on all four corners. On drier pavement, there is a “AWC Eco” mode that saves performance while switching between front and all-wheel control.

Driving the Outlander is a good experience, with its absorbent suspension that takes on rougher roads without a lot of feedback into the cabin. In fact the cabin is much quieter than before, proving the effectiveness of the 100 changes Mitsubishi made to the Outlander. In terms of cornering, it does lean and roll through them.

At the wheel, on-center feel is better than before, and offers a tighter turning radius than most of its competitors. Brakes are solid with good stops in normal and panic situations. Snow and ice stops were predictably long, but could be improved with proper winter tires. However, the Toyo A24 all-season tires were quite adequate in terms of traction and grip on winter surfaces. Overall driving dynamics have certainly improved in the Outlander. 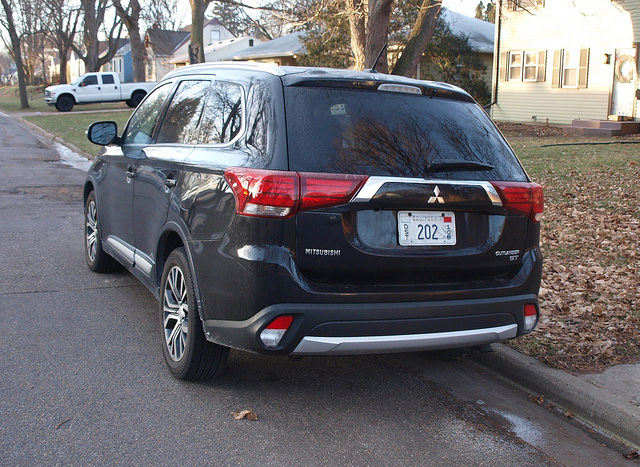 Another attraction to the Outlander is its value. The basic ES model with just front-wheel drive drive is priced from $22,995. Adding S-AWC to the ES model will cost you another $2,000. This loaded GT S-AWC tester came with a sticker price of $35,195. This included the Touring package with Forward Collision Warning, Adaptive Cruise Control, Lane Departure Warning, and the Navigation system. This is definitely a must-have package for the Outlander GT and well worth the extra $3,350.

On a fundamental level, the Outlander serves its own argument against its competitors. The big question is: to which competitors should you compare the Outlander? Only the Nissan Rogue offers three rows of seating in anything smaller than the Outlander, though the Nissan is shorter by three inches. Mitsubishi counters the Rogue by offering a V6 engine, the capability of towing 2,500 more pounds behind it, and more space and comfort overall. The choice seems a bit more simple.

Just like other Mitsubishi models, the GLBT community also embraced this three-row crossover/SUV as one of our own. On a basic level, the Outlander serves as a great, lighter weight and versatile transport for those needing more cabin and cargo space. Now, there are a 100 more reasons to like the 2016 Mitsubishi Outlander even better.