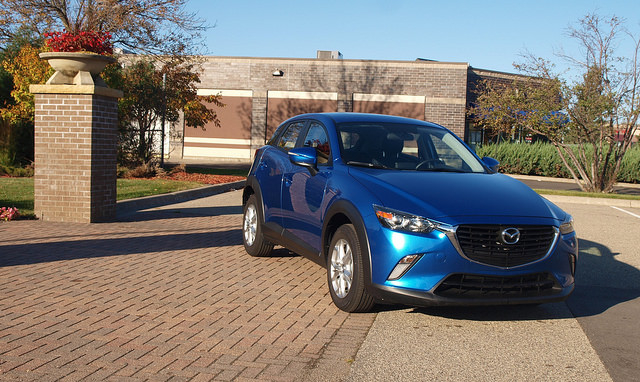 One would presume that the number of new subcompact crossovers being introduced these days would translate onto the streets of our communities.

Well…honestly, it’s hit or miss. Around here, some of the more established models made their presence already on our streets. The Mitsubishi Outlander Sport is a favorite in our community, with the Nissan Juke running a good second. There are growing legions of Honda HR-V, Chevrolet Trax, Buick Encore, Jeep Renegade, and Fiat 500X owners that are joining the Outlander Sport/Juke crowd.

All of the above listed vehicles are definitely choices dictated by consumers looking for maximum utility in a small package. However, there is another population of automotive consumers these vehicles need to attract: enthusiasts. These are the people with a Mazda MX-5 Miata in storage during the winter. They care more about drivability on a level where good handling is not enough to whet their appetite for adventure. For them, a mere subcompact crossover is not enough.

For them, there is the new 2016 Mazda CX-3. But, is it the one for them? Or, is it really for the rest of the consumer population?

The CX-3 arrives as a solution for those living in urban enclaves needing a sportier solution to a problem: getting around town with more than a few grocery bags in the back. Yet, this solution must be able to park in tight spaces on the street, even if it is down the block from the front door of your place.

The first solution is to make the CX-3 look the part. It takes an interpretation of the “KODO — Soul of Motion” design language seen on almost every Mazda so far. This interpretation resulted in a long nose, about the size of the Mazda3, yet with a long overhang from the front wheels. Certainly there is enough front end between you and potential obstacles, and there is an assurance of safety by doing so. The roofline is sporty, but not upright in the rear end. It looks good, but there is a drawback to having a roofline of that degree of slant; however, the hatch opens wide for better loading, despite the high loading height above the bumper.

Our Touring tester had smaller 16-inch wheels, which are great to avoid wheel-curb rash. They are also great for winter driving, since the higher sidewall is better to get through the snow. The front doors are large and open wide, though the rear doors are amenable for rear seat access, despite being a bit smaller than some of its competitors. In all, the CX-3 is handsome, though some people might be picky on the long front end and other details. 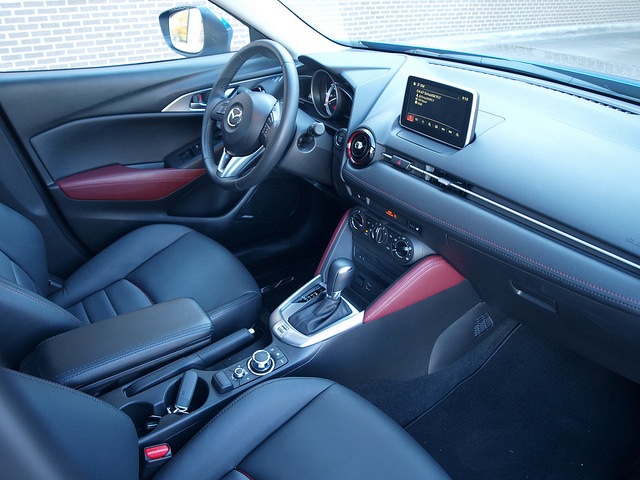 Mazda has been stepping it up on interior design, and it shows inside of the CX-3. The instrumentation focuses on a center speedometer dial with two digital “wings.” The left screen offers a tachometer and gear position, while the right shows fuel level and trip information. Pretty straightforward and understandable. The rest of the dashboard falls along the same theme, mostly seen on other recent Mazda models with a combination of circular and in-line vent ports, lower climate controls, and a small tablet-like screen for the infotainment system. This falls down into a center console that has the knob controllers for the tablet-like screen above (also known as Mazda Connect) and a short transmission lever.

Luckily, the CX-3 gets the improved Mazda Connect system now seen on several Mazda models. The larger knob controls everything from radio tuning to point of interest searches for the navigation system. This system offers SiriusXM, full Pandora integration, a solid navigation system, and Bluetooth connectivity for the phone and music file playback. Bose provides seven speakers for clean sound throughout the cabin.

This Touring model that I have been testing has leatherette seating in black with a muted medium shade of red for trim pieces around the cabin. The red accenting was OK, but I had some questions about it considering it is wearing a blue exterior color. Colors aside, the seats are fine with a balance of comfort and support. It is not a tall vehicle, so headroom for taller people may need some adjustment when equipped with the moonroof. Rear seats are comfortable for two to three people, but there is not enough leg room for tall people. Four average sized adults would have a fun time inside the CX-3 at best.

The cargo hold is at best adequate to use. With the rear seats up, it only has 12.4 cubic feet to spare. Fold down the rear seats, and there is 44.5 cubic feet available. This was put to the test twice: carrying two sets of bags for the run home from a regional media event outside of Chicago to Madison, Wisconsin and to haul a plethora of trophies for a car meet one of my outlets was co-sponsoring. For the luggage issue, I needed to fold down one part of the rear seat to accommodate at least my bags. As for the trophies, it did carry the weight without hesitation. The CX-3 has a payload rating of 1,038 pounds. 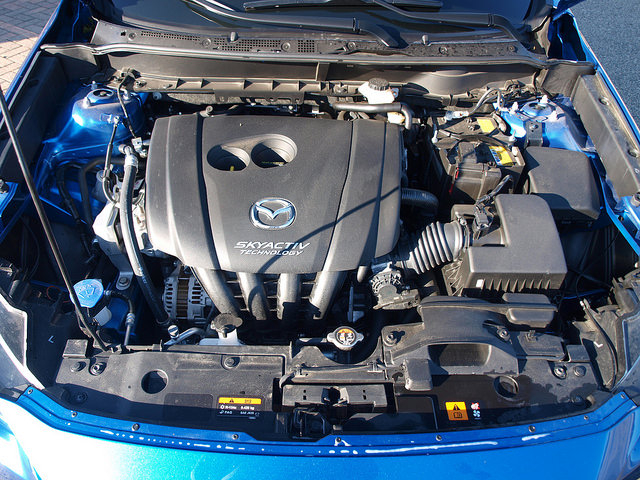 The name of the game for the CX-3 is Skyactiv technology. It starts with the original Skyactiv engine, a 2.0-liter four-cylinder engine. In the CX-3, this engine puts out 146 horsepower, which is adequate for this class. A six-speed automatic transmission is the only gearbox available on the CX-3, and it is a good choice for this engine. This tester had all-wheel drive, which I hoped to test out as the atmosphere started to feel a bit “snapped.” In all, this driveline works fine in the CX-3 keeping less than 3,000 pounds of subcompact crossover motivated over its extended test, including the haul from outside of Chicago to Madison and back up to the Twin Cities.

The ride was simply fine. The suspension absorbed what it could from most surfaces and was strong enough to handle the extra cargo of car meet trophies when it had to. Although, I did find a lot of road noise coming from the tires and the road below, even when the CX-3 was empty. Handling was just as expected from a crossover, which trended on the soft side. Roll was present in the turns, but not enough to cause alarm for occupants. Steering was OK, though a sharper action and a tighter turning radius would make it perfect. On-center feel was good and turning action was solid. Brakes were fantastic with good stops in both normal and panic situations.

For the CX-3, Mazda claims it could get up to 35 MPG. In reality, I got an average of 29.4 MPG. No matter how you look at it, that’s still decent for this kind of vehicle.

A CX-3 Sport with front-wheel drive is priced from $19,960. This loaded all-wheel drive Touring model came with a sticker price of $26,150. Lately, I’ve found that even subcompact crossovers are getting a bit spendy. This is a concern, especially when they are supposed to be “affordable.” Perhaps it is all relative considering the price of new vehicles today, including the most popular models. 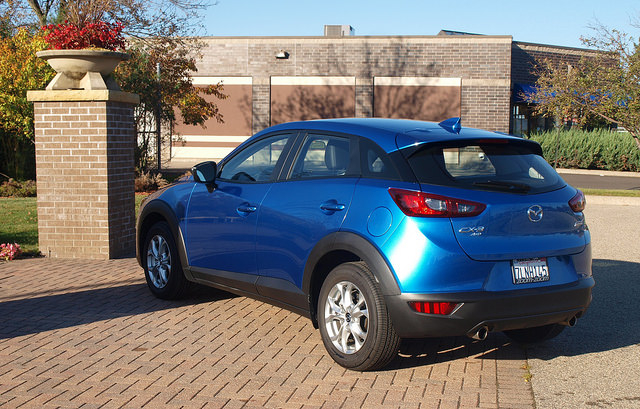 Now that the subcompact crossover segment is growing, there are a few considerations to take away from the CX-3. Though enthusiasts will love this vehicle, one wonders if it is just the name they are attracted to rather than the vehicle itself. There is something behind the Mazda, any Mazda, that enables enthusiasts to get the most out of their vehicles; however, this should not exclude the rest of us. For that, the Mazda makes a lot of sense when selecting one from this segment.

But this is not about making sense. It is about the ability to live in an urban enclave (or anywhere we live) and have the right vehicle to (a) get through winter, (b) haul more than a few bags of groceries when we have to shop, and (c) have something small enough to manage traffic better. For those criteria, the Mazda CX-3 makes a lot of sense. It is the best in the class.