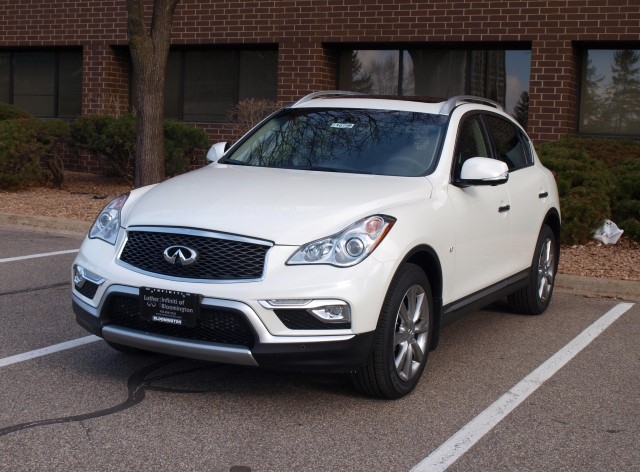 When you miss the mark, you get another chance to redeem yourself.

This is the story of the 2016 Infiniti QX50 in a nutshell. It really is a solid offering for Infiniti, yet it has not been given a fair shake in the marketplace. Premium buyers always choose German over anything else, so models, such as the QX50, are simply left on lots untouched.

That is, until now. The QX50 received a major update that has helped its cause greatly. In month-over-year sales, the QX50 had seen gains of almost 600 percent. The reasons are simple: these vast improvements are indeed working in Infiniti’s favor.

Before I dive into how Nissan’s luxury compact crossover has improved, let us go back a few years. The QX50 first arrived as a 2008 model known as the EX35. It shares the same platform as the old G/Q40/Q60 models, as well as the extended platform for the Q70 and QX70. The EX/QX50 is also sold as a Nissan Skyline back in Japan, the origin of Infiniti’s most popular models of all time, the G35/37.

One would assume that the EX would be as popular as its sedan and coupe brothers. This is where it gets a bit muddy. Consumers in this segment are tough on anything that does not resemble a BMW X3 or an Audi Q5. The EX/QX50 was also saddled with a few issues, chiefly tight rear seat space that also limited cargo expansion. 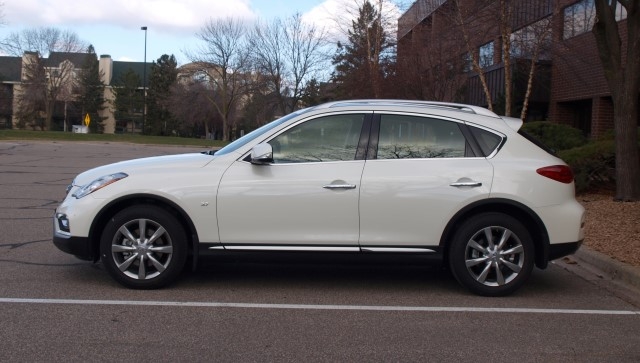 To address this and other issues, Infiniti rolled out a new QX50. This time, they addressed the rear seat space issue by extending the wheelbase; in essence, sending the longer wheelbase version sold in key markets outside of North America here. They also worked on the details, such as distinguishing the QX50 from the now defunct Q40/Q60 models.

Do these changes make the QX50 a better competitor in one of the toughest segments in the marketplace?

At first glance, making the QX50 more distinguished than previous models was indeed the right move to make. While it gains the mesh grille now seen across the Infiniti lineup, it also got some tougher details, such as a more aggressive lower grille and front bumper, beefier wheel arches, and enhanced lighting front and rear.

The longer wheelbase makes the QX50 look accessible. The rear doors are a bit wider than before, making rear seat access no longer a chore. The rear liftgate does open high for a tall person to load into the cargo hold without bending down. This is something not achievable on some of the QX50’s competitors. In all, the QX50 offers a fastback look that encourages more practical pursuits. 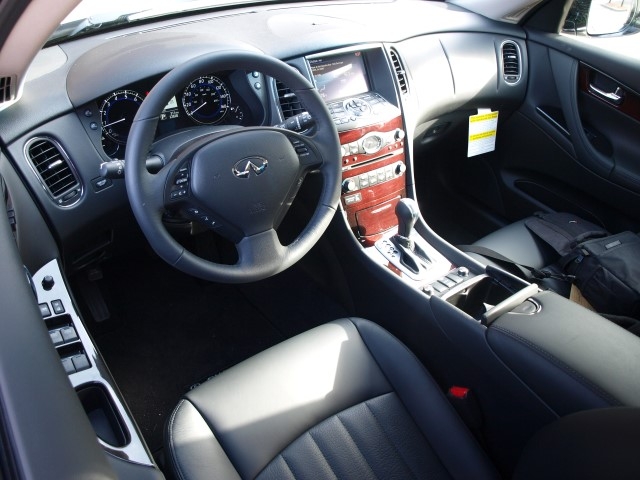 Once inside, one wondered why the cabin has not changed from previous EX/QX50 models. One needs to sit in the back seat to understand that real change: rear seat room. Headroom is excellent, but you do feel the difference in leg room. This is a space where four six-footers can enjoy the ride in seats that have a perfect leather feel to them, along with some nice comfort. There is enough contouring that locks in front occupants.

Looking ahead, there is a feeling that some of the latest Infiniti interior elements did not get handed over to the QX50. In some cases, that could be a good thing. The instrument panel has some updates, even though it can trace its roots to the G sedan; remember, these two are related. One could complain for the lack of a TFT information screen or cleaner controls, but when things do work why sweat the small stuff? One may be put off by the plethora of controls below the infotainment touchscreen. They may be confusing at first, but they are indeed logical and functional for the navigation system.

Its fastback design hides about 18.5 cubic feet of cargo behind the second row of seats. Although it seems small, it actually can pack plenty for a good yield of shopping or a solid road trip. The rear seats fold down for more space for longer cargo. Our tester had 11 Bose speakers on board to fill this cabin with sweet music. 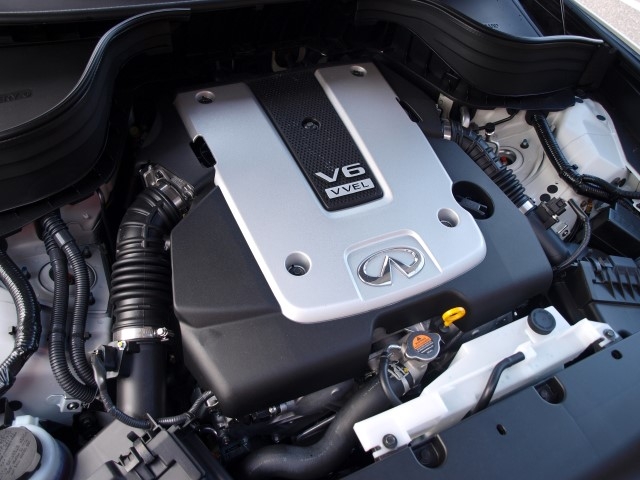 Under the hood is the VQ37 3.7-liter V6. This is one of the better engines Infiniti (and Nissan) makes. With 325 horsepower on tap, the 4,000 pound QX50 AWD model has plenty of power to run with. This engine is connected to a 7-speed automatic transmission feeding to all four wheels on our AWD tester. Fuel economy is within range of the class, with an EPA estimated fuel consumption average of 17 MPG in the city, 24 MPG on the highway.

For a vehicle of its size and function, the ride quality was pretty decent. There was some suspension play on rougher surfaces, but not enough to cause concern for those demanding a smooth ride all of the time. Handling is controlled with minimal lean and roll through the corners, almost like the old G/Q40. Steering is quite good and rather precise. Braking is quite good, too. Normal and panic stops showed solid behavior over good braking distances.

In terms of safety, the QX50 is available with several key features, such as Lane Departure Warning, Lane Departure Prevention, Blind Spot Warning, Forward Collision Warning, Intelligent Cruise Control and Intelligent Brake Assist. These are wrapped up in the highly desirable Technology Package, which is the most desirable spec to have on the QX50.

Another thing that makes the QX50 an attractive buy is the pricing. Though it starts at $34,450 for a rear-drive model, all-wheel drive models start at $35,850. Where the value comes into play is when you spec one out with all of the packages. When all of the boxes are ticked, an AWD QX50 will comes with a sticker price of $44,495. Most of the QX50’s competitors simply blow through this price threshold, even beyond $50,000 when equipped equally to the top spec QX50. 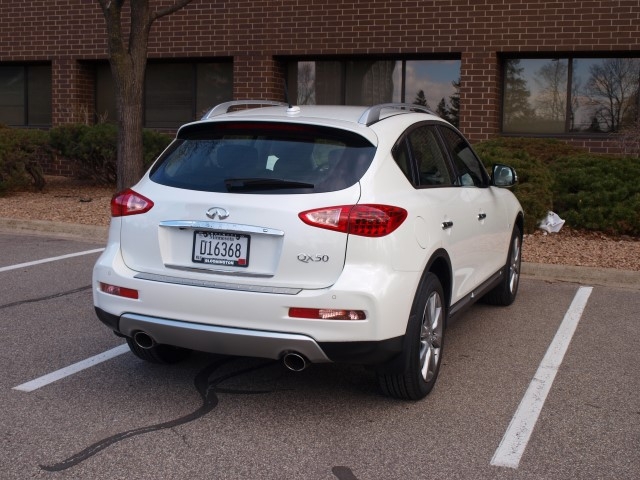 One reason for the QX50’s surge in sales is that it is an overall good value for the money. In its class, the more you pay, the better you feel about your vehicle and the prestige it embodies. Yet, one forgets what the QX50 is all about; it’s a premium crossover, yes, but there’s a lot more to it.

If the 2016 Infiniti QX50 fits your lifestyle, it is a smart choice to make for your next crossover. Just think of the savings by choosing this over everything else in its class. That is one thing that does not miss the mark.