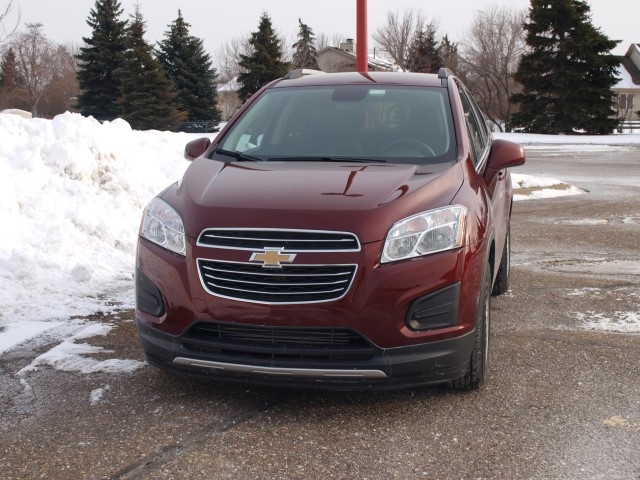 Dear readers of Lavender magazine, you probably are wondering why I keep talking about the subcompact crossover segment. I understand that you probably think that I must sound like a broken record by now.

Well, it is an important segment. I know some of you who have bought one of these vehicles. Don’t think that your social media posts go unnoticed.

This is why I cover this segment. I have driven everything on offer and have made my evaluations over time. Believe me when I say that I might be an expert in this field.

However, I am not, officially. I am just a contributing writer to this magazine with a specialty in covering the automotive industry and its products.

Let me start with this one fact: General Motors sold over 63,000 Chevrolet Traxes in 2015. This is the second-best selling model in its class, behind the Kia Soul. The Trax has plenty of competition with the Jeep Renegade and Honda HR-V battling with the small Chevy and the Kia for customers that want a high-riding, capacitive vehicle that does not take up a lot of space. This is ripe for young(er) urban dwellers, but these vehicles attract a larger audience than you might think.

Then again, there is a realistic demographic for this kind of vehicle. They just happen to be middle-aged, single, living in a mix of urban and suburban neighborhoods and enjoy a so-called active lifestyle. In other words, these customers would also be a good match for the Chevrolet Trax.

Does the Trax match up with its intended and real demographics? 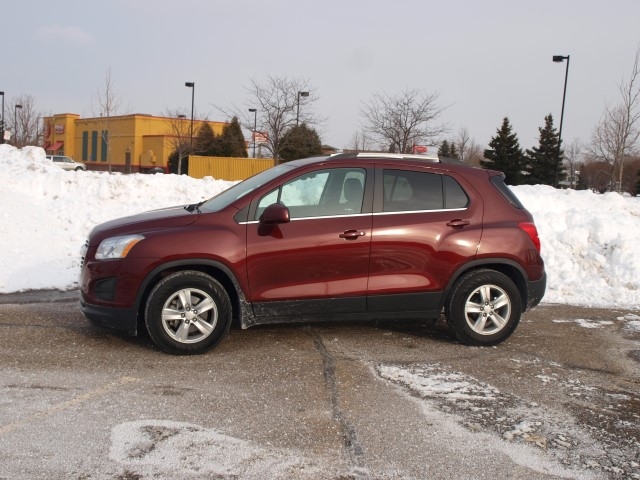 In a sense, the look should be familiar to Chevrolet customers. The dual-mouth grille is split by a horizontal body piece with the gold bowtie up front. Headlamp units are crystal clear emitting decent light ahead. The body itself seems pretty concentrated — short, squat, though with a raised ground clearance, big doors and tall roofline. The liftgate opens high and wide, which makes throwing stuff in the back quite easy to do.

The example I drove was the LT trim with only front-wheel drive. This is important to note since we live in Minnesota and the weather during its time with us would be considered “typical January” — cold, snowy on occasion, and sometimes sunny. It would be desirable to have the all-wheel drive version for this part of the country, true, but let’s talk about another reality: not everyone buys the all-wheel drive version. Some people simply think they don’t need it. That would be cause for a huge debate that would somewhat detract from this review.

The LT trim offers some upgrades, such as a chromed grille and alloy wheels. Combined with this rich Crimson color, it is a handsome little car. Really, there’s no shame in your game if you drive this example, regardless of how many wheels it drives. 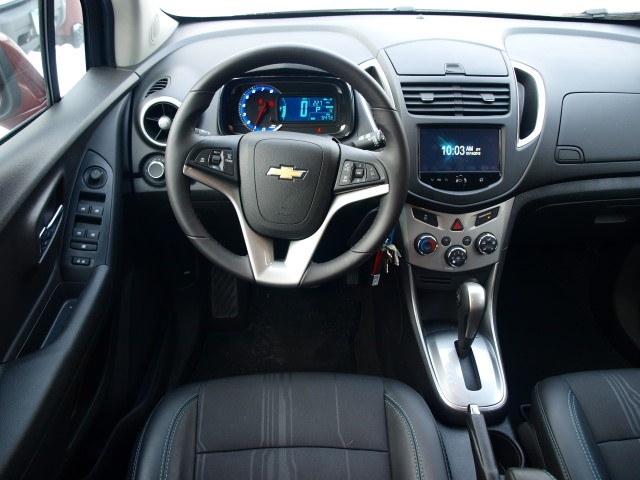 Though it looks concentrated on the outside, the Trax is pretty spacious inside. Front seating offers plenty of adjustment, along with a lot of headroom. The LT seats are a mix of firm cloth and leatherette, with some bolstering and support to go along with decent comfort. Rear seat room would be fine for average-sized adults. Long-legged passengers may have some challenges, if everyone up front happens to be as long-legged. Cargo space is excellent, starting with 18.7 cubic feet behind the rear seat, expanding up to 48.4 cubic feet with the rear seat folded down.

Some may dismiss the digital instrumentation to the right of the analog tachometer. It is very useful. Chevrolet has the “small car version” of MyLink, which has an easier interface in the home page and a large, easy to read screen for audio selections. You get your requisite jacks for wired connectivity, Bluetooth for optimal connection to your smartphone, and SiriusXM for extended radio entertainment. It does not have on-board navigation, but pressing the blue button with the OnStar logo will send turn-by-turn directions to the Trax. In other words, don’t worry about your smartphone mapping apps when OnStar is enabled.

Speaking of OnStar, the Trax is a mobile Wi-Fi hotspot for your devices. Actually, it has a 4G LTE connection that can tether up to seven different devices to it. A year-and-a-half ago, I tested this connection and found it be exemplary and extremely useful. It seems ironic that you can have someone — a backseat driver — use the OnStar 4G LTE connection to tell you where to go. Personally, I would press the blue button instead. They’re good people at OnStar. 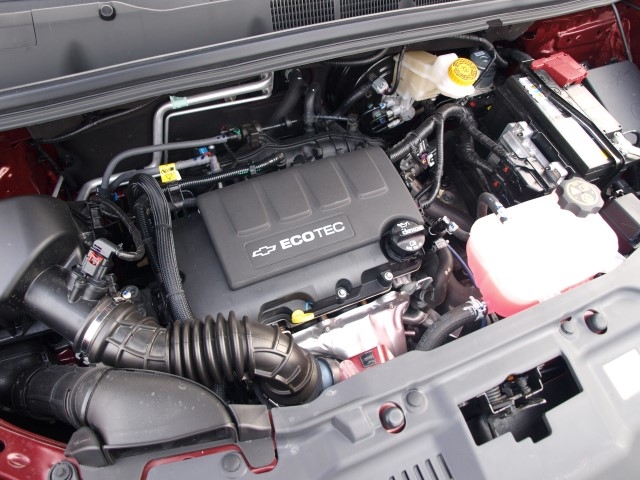 Powering the Trax is a 1.4-liter turbocharged four-cylinder engine seen on other GM small cars. With 138 horsepower on tap, it is an eager motor. It actually loves highway speeds, as well as running around the city. A six-speed automatic transmission matches well in the middle to upper gears, while a bit more throttle motivation is needed for the turbos to kick in. Also at lower speeds, it could get noisy under hard throttle. Once it gets in a cruising mood, the Trax quiets down enough for everyone to have a conversation…or surf the internet via the 4G LTE hot spot connection.

The ride is smooth for the most part, bumpier roads are felt, but the Trax’s suspension system works hard to absorb these surfaces the best it can. Handling is on the soft side, but very controlled. There will be some roll and lean trough the curves. Steering is tight with a very small turning radius. There is equally good reaction from the wheel with a solid on-center feel; however, the brakes had a bit of a light feel at the pedal, yet it still produced decent stops in normal and panic situations. 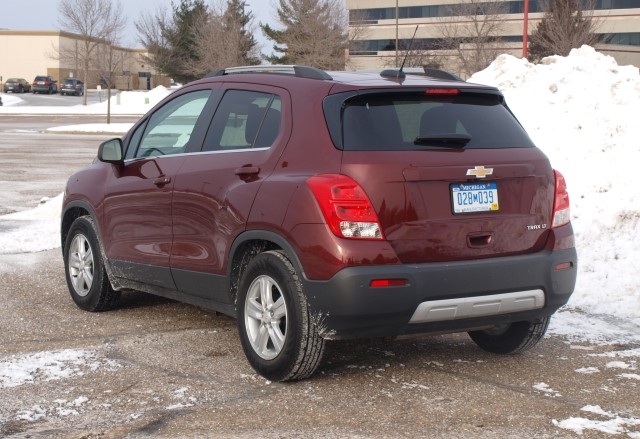 Chevrolet calls the Trax a “city smart SUV.” It may be right for parking-starved urban neighborhoods in Minneapolis and St. Paul, it is also ripe for practically everywhere our magazine reaches. It is a great suburban alternative, if the task includes going to a park ‘n’ ride, picking up groceries and other household goods, and that occasional run into the city. You may find more Traxes out in rural communities, where price, economy, and practicality trump other wants.

Because the direction of auto sales is heading toward more crossovers, the Trax seems like a good fit for customers looking for a combination of everything in a small package.