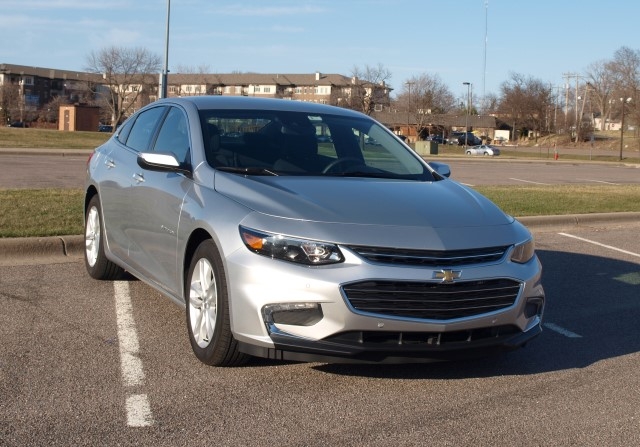 Let’s talk about that commercial for a moment.

There is an advert running on television and social media for which a group of “real” people are led to a courtyard to see a white debadged mid-sized sedan pull up. It is certainly sleek and sexy, well proportioned and attractive. The group of men and women encircle the car to say that this mystery sedan was either a “BMW” or an “Audi.” To their surprise, it turns out that it is the 2016 Chevrolet Malibu.

On one hand, it is a very curious commercial. It is audacious in its delivery for having “real” people think that a car that was clearly not designed in Europe could be considered something that originated from that continent. Yet, you have been talking about this commercial. You have mocked it. It was an entry toward a longer discussion about this vehicle.

There is an upside to this commercial. Because of it (or in spite of it) Malibu sales are up. This sedan is now the second-best selling nameplate at any given Chevrolet dealership across North America since the beginning of calendar year 2016. Not because it looks like a BMW or an Audi. There is much more to it.

When I received this new sedan in review, I got a lot of flack from you. You went on to mock it for being a BMW or an Audi. You knew darn well that this is a Chevrolet, because you saw that commercial. Fine. I took your ribbing like a good openly gay automotive writer and proceeded to take the Malibu through its paces.

Let me indulge your mockery by giving you my thoughts on the new 2016 Chevrolet Malibu. 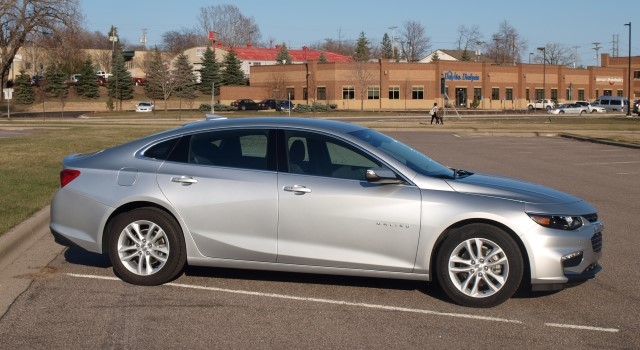 Chevrolet design has been transformed with sharper, more cutting edge lines that make each model sleeker, but more practical than before. The Malibu went a bit further with a lower silhouette, a wider front end leading to a more tapered rear. The overlook is far from European by any means. Some might say that the Malibu took its influences from Asia, where they conceive and execute sleeker mid-sized sedans with sharper edges than anywhere else.

The wide-mouth lower grille greets you, framed by a sleek upper grille and headlamp units. The low lines rise gradually to envelop an equally sleeker fastback-like roof. A three-glass side greenhouse fits perfectly for the new image Chevrolet wanted for the Malibu. This leads to a sculpted rear end, one could easily mistake this for one if its competitors. No worries, the bow tie is there to let you know that it is indeed a Malibu.

On our 1LT tester, the Malibu came with 17-inch wheels that are handsome. If you select higher trim levels, the wheels become larger, nothing more than 18 inches. Still, the package is handsome and, yes, distinctive enough to pick out in a lot. This is an absolute testament of what the retiring vice president of design at General Motors, Ed Welburn, wanted for not only Chevrolet, but for the most mainstream car in its lineup.

The reason why I mentioned Mr. Welburn is because he is a pioneer at General Motors, first working in the Buick studios as the first African American designer at GM. After 44 years of rising to the top of his game by applying his pen, sculpting tools, and his signature to sign off on the latest looks from GM, Welburn will leave a legacy behind for all of us to enjoy for decades to come. I know I will miss seeing Mr. Welburn in action on any given auto show floor. 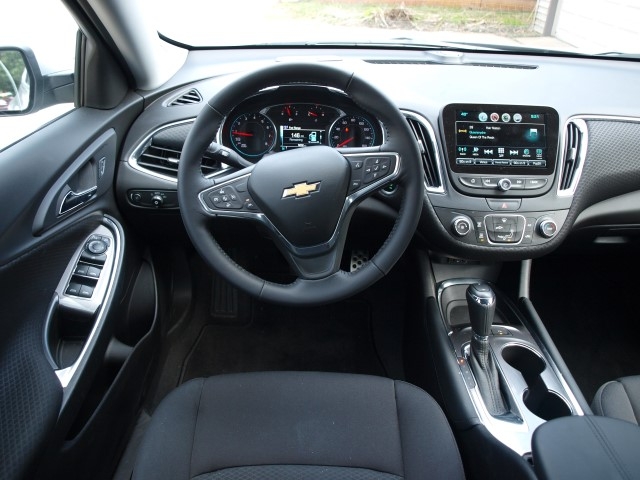 In continuing to pay tribute to Mr. Welburn, the Malibu’s cabin offers the latest in GM design. The cowl is low, but it offers an informative setup within the instrument binnacle. Two large dials give way to a customizable central TFT screen where every bit of data can be gleaned in a clean format. The new steering wheel offers a set of switches that control the center screen, cruise control, and add two sets of audio controls on the back of the spokes. Other switches are made cleaner to operate on the stalks, as well as other controls below the instrument panel’s beltline.

The center stack offers a new design for Chevrolet. It may appear to be a small tablet-like screen, but it is still attached to the rest of the instrument panel. This is where MyLink resides; Chevrolet’s infotainment suite that includes various functions, from climate control to radio broadcast to OnStar’s 4G LTE Wi-Fi connectivity. This screen also plays as the control for two new connected technologies, Apple CarPlay and Android Auto. Using an Android phone, integration looks seamless, as long as you connect via the USB port. It emulates Google Maps perfectly, which makes for a great replacement for an on-screen navigation system; or, at least for one not equipped with such.

Our 1LT tester had cloth seating that offers decent comfort and bolstering for its front occupants. Front space is quite good while seating offers some bolstering and support to all kinds of drivers. Rear seat comfort is also quite decent with improved leg room from the last generation. Headroom may be challenged due to the slope of the roofline. Trunk room is very spacious: 15.8 cubic feet that does a good job in taking on an extended weekend full of luggage for all five passengers. 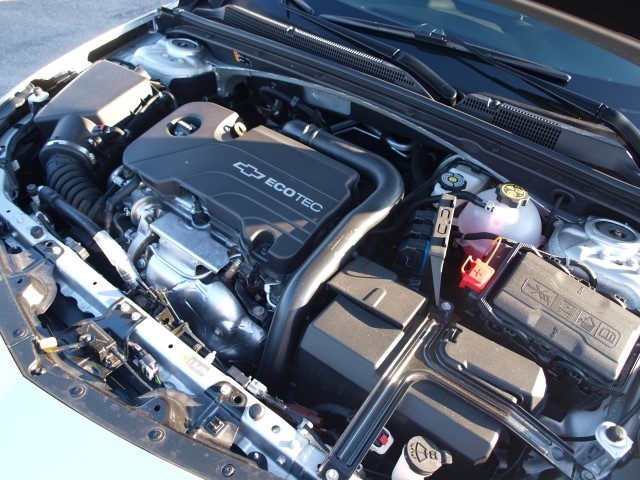 Power has been changed to an all-turbocharged lineup. This 1LT tester had the smaller 1.5-liter version of the turbo Ecotec four-cylinder, with 160 horsepower on tap. It certainly does not feel like a 160-horsepower engine, since it offers smooth takeoff with nominal turbo lag. It certainly feels its 184 pound-feet of torque, a welcomed figure to help pull about 3,126 pounds of mid-sized sedan. This engine was channeled through a six-speed automatic transmission sending power to its front wheels. In terms of fuel economy, the efficient turbo engine turned an average of 31.1 MPG.

Ride quality was competent. It was not as smooth as we wished, even when trying to absorb not-so-great road surfaces in its wake. Handling is on the soft side, but controlled through the corners. Steering was also fine, trending toward the numb side for true road feel; yet, it did exhibit a good turning radius to get out of tight situations. Braking was very good, showing great pedal feel and solid stops in normal and panic situations. 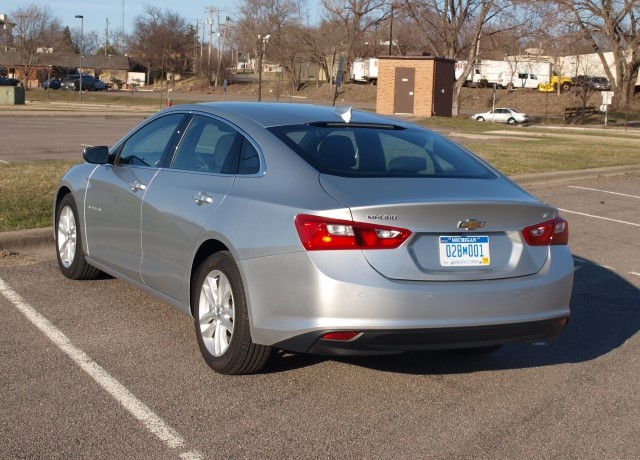 The starting point of the new Malibu lineup is an L sedan with a base price of $21,625. This 1LT tester came with a sticker price of $27,985, a solid middle-of-the-road value with popular equipment included. For 2016, the Malibu can be ordered as a Hybrid, using a 1.8-liter gasoline engine with a two-mode electric driveline. With the promise of achieving up to 47 MPG in the city, a Malibu Hybrid is priced from $27,770.

Even with the complimentary reactions by the “real” people in that commercial, it seems that Chevrolet has created the best Malibu in a very long time. It matches with the needs and wants of mid-sized sedan customers for today with an edge toward tomorrow. There are plenty of competitors that do not offer the content that the Malibu has now, a huge nod to the advances Chevrolet and General Motors are making in this segment.

Yet, one thing must be addressed immediately. There is no mistaking what this sedan really is: a Chevrolet. And, that is a good thing these days.