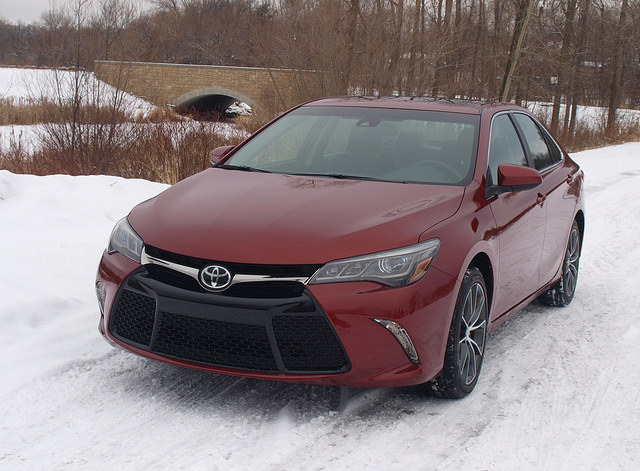 Before I get into this “Ride Review,” I want to start off with recalling a conversation I had recently.

I was meeting with our Managing Editor, Andy Lien, when she complimented the car you see on this page, that was parked in front of our office. I smiled and thanked her before explaining how much the Toyota Camry had been derided by the automotive media by calling it “beige” or “milquetoast.” Upon further discussion, I finally concluded that this particular model could certainly be called “beige,” but with an added layer of Nutella spread over and a coating of sugar on top.

Now that I got your attention, over 428,000 of Toyota’s mid-sized sedan sold in the U.S. in 2014. Continuing as the best-selling passenger car in the country, the Camry’s image is that of being perfectly fine for anyone who simply wanted a spacious sedan to drive. About as many people as I could recall has had a Camry during their lifetime — a testament of 32 years as Toyota’s go-to sedan in the U.S. It would be nice if it looked spectacular and/or offered the highest level of features at the prices you pay for a Camry.

For 2015, Toyota presented us with a mid-cycle refresh of the latest Camry. They went much further than we expected: new front end, new side profile and glass silhouette, new rear end, improved interior, a new trim level and a higher level of equipment available for the first time. As ambitious as these revisions were to accomplish, it really just comes down to execution. Has Toyota made an exemplary Camry that anyone would be happy to own?

The Nutella-and-sugar-coated Camry seen here is the top-of-the-line XSE model. Considering the color, it could be seen as a red velvet cake. One look and you can see how deep these updates were made to this popular sedan. It is distinctive — something you never said about a Camry in years. The new nose stands out with lower bumper creases for the running lamps below. A mesh texture denotes the lower grille for the sportier Camrys, yet the chrome and black upper grille is the car’s calling card. In all, it makes the Camry an aggressive sedan, looking for a competitor to race.

One detail that caused a stir was a recessed C-pillar trim that makes the side glass look longer. In early Camry models from the 1980s, that area actually had a piece of glass aft of the rear door. Though handsome and adding a nice illusion to the side profile, a piece of glass would be nice to put there with its chrome trim. The rear end is the nicest in Camry history, period. It is very sculptured and kept aligned with current Toyota design cues. The XSE adds a rear spoiler enhancing the aggressive nature of the exterior, along with 18-inch black-and-satin silver alloy wheels. In all, the best looking and proportioned Camry ever — 32 years in all. 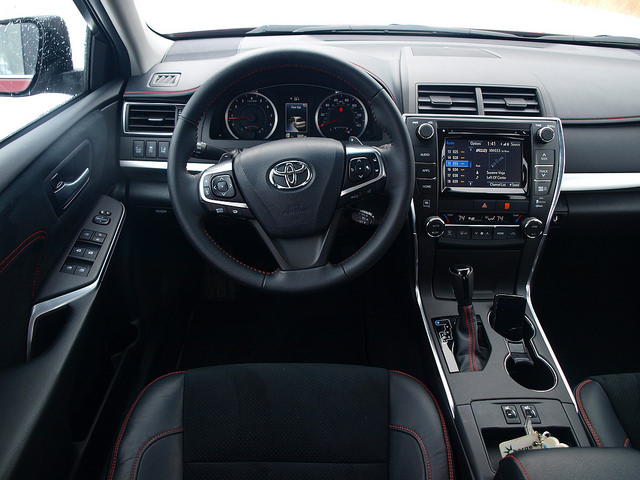 The XSE also offers a different kind of Camry experience. We have seen this in the SE, but the new higher trim level steps up the quality and luxury inside. Inside this red velvet sedan is a black interior with red and chrome trim where appropriate. The red is the contrast stitching found throughout the cabin, with chrome accents that are tastefully done. There is nothing contrived about this cabin; you could say that it really is very business-like inside.

The instrument panel received the bulk of the updates inside. A new instrument binnacle now has clearer gauges, including better designed temperature and gas analog dials. A center TFT screen is wider with better graphics and readouts. The center stack houses the touchscreen Entune infotainment interface with minimal switches surrounding it. Even the climate control system has large tactile buttons that are both intuitive and clear to operate. The rest of the switches are familiar across the Toyota (plus Scion and Lexus) range, which means they are good to the touch.

The front seats are a good size with great bolstering in the seatbacks and cushions. Instead of full leather upholstery, there is a combination of leather, suede, and cloth contrasted by red stitching. That combination works for all climates, though you do get heated seats in the XSE. Rear space is good for two to three people, something that is a selling point for the Camry of late.

Complementing the cabin is a set of JBL GreenEdge speakers. These are speakers that are made of environmentally friendly materials making each unit light in weight and construction, while emitting a beautiful tone. In the Camry XSE, there are eight of them, including a subwoofer, powered by an auxiliary amplifier. You can connect a smartphone through the Bluetooth connection with the Entune app facilitating Pandora and iHeartRadio through the audio system. SiriusXM satellite radio and HD Radio are part of the infotainment package, along with satellite navigation and phone pairing. To top it all off, this model offers QI wireless charging to keep your smartphone full of battery power all the time. 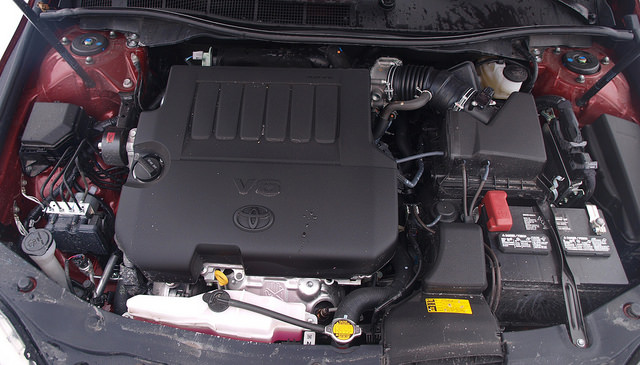 The Camry has three engine options: the base 2.5-liter four-cylinder, a hybrid version of the same engine, including the Hybrid Synergy Drive, and the beast underneath the hood of this XSE. While you can get the XSE with the standard four-cylinder, you would want the 3.5-liter V6 instead. With 268 horsepower on tap, it is the perfect engine for the sportiest and luxurious Camry of them all. It’s simply smooth — real smooth, like Nutella. And, it’s quick. If you push it hard, it will respond appropriately.

The smooth V6 is attached to an equally smooth six-speed automatic. Together, they make for nice cruising. That is until you put it into the “S” slot. There, you can either flip the shifter or use the paddle shifters on the steering wheel to make your own gear changes. Now, your Camry becomes something a little more engaging. Power is sent to the front wheels, with a great traction control system keeping the Camry on track when grip is less than acceptable.

Though the engine screams performance, the Camry is still a smooth riding mid-sized sedan. Perhaps the word I am looking for is “balanced.” On most surfaces, the suspension keeps the Camry from getting loose. Just a nice, smooth ride for everyone to enjoy. There is a bit of roll in the turns, but well controlled by sport-tuned shock absorbers and extra bracing in the rear end. This set-up tells you that the Camry XSE is sportier, but not a true sports sedan of the traditional hard-riding, stiff suspension variety.

When steering, you have a huge wheel to rudder connected to an electric system. Some steering feel is there, but not completely. It is not as vague as it is perceived to be. It is soft for feel and response, as with on-center feel. If you are supposed to be a sportier sedan, the steering should be a bit tighter and heavier for a more direct feel. The brakes also have a softness at the pedal. Stops are good in normal, panic, and winter (i.e. snow/ice surfaces) situations.

New to the Camry is a suite of active safety features found on more expensive cars. This includes blind spot monitoring, lane departure alert, adaptive cruise control, rear cross-traffic alert, and a pre-collision system. They work quite well and exude a confidence needed on the Camry toward making you a safer driver. 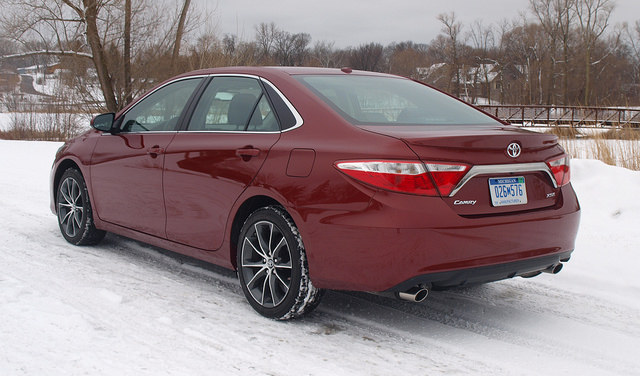 The Camry’s reputation for turning in great fuel consumption results makes it a best-seller. However, we have a V6 model with 3,480 pounds of mid-sized sedan to pull. We saw a fuel economy average of 24.9 MPG from this Camry XSE.

Value is another reason why the Camry is very popular. A base LE sedan starts off at $22,970. At the top of the range with added packages, this XSE V6 example came with a sticker price of $35,668 — perhaps the most you could pay for a Camry.

In all, the Camry looks better, feels better, and offers more tech than ever. However, it is in the middle-of-the-road where most mid-sized family sedan buyers want to be. In the case of the Camry, these visual and tactile improvements help to continue the sales lead above the competition. These conclusions are simply based on a collective of the Camry lineup. However, the XSE V6 tester shows what is possible when you open up the lid to this popular sedan.

There is still more to satisfy those who truly want a Camry with an enthusiast’s bent. Yet, most of the owners of the 428,000 Camrys sold in 2014 will tell that all they need is an affordable sedan with good fuel economy, space for five adults, and their stuff. Oh, and make it more handsome than before. I believe Toyota has delivered what the majority wants. It has delivered a good car.

Is the Camry as good as spreading Nutella and sprinkling it with sugar on this red velvet cake? Well…it is a good car, indeed.