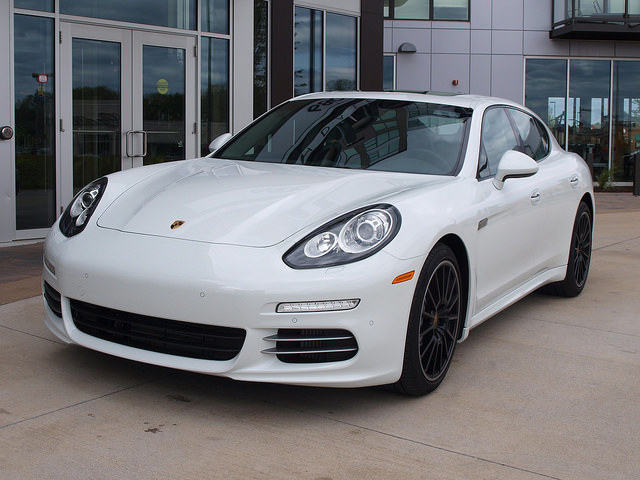 Grand openings are always an exciting time for any business. They signify a start…or a restart, in some cases. The freshness of a new location, from the paint to the flooring to the glass, all lead to a sense of excitement for the enterprise as they welcome their first customers.

In the case of Carousel Auto Group’s Porsche dealership in Golden Valley, it is a renewal. The new building is larger and more aligned with facilitating the growth of the brand. Porsche Cars North America has been on the rise with new products adding to their traditional offerings. The new $10 million, 31,000-square-foot facility, including expanded showroom, service, and parts areas, is a reflection of the Twin Cities and Upper Midwest markets want of these fine products from Stuttgart.

One of the latest products offered by Porsche happens to be its most controversial. The families that own Porsche never considered themselves a maker of sedans. If it has to have four doors, it was either something of an experiment that often met with disdain and outright hatred from its fellow coworkers or its enthusiasts. Four-door products ended up in some other form: the Cayenne SUV. By a single act of product design and engineering, the Cayenne was responsible for opening up new markets and customers for Porsche. It also opened up the possibilities for offering a four-door luxury automobile.

Per my invite to inspect Porsche’s new Golden Valley facility, I was invited to drive a product that I had yet to touch from them. Last year, you read about my drives in the latest Cayenne, Cayman coupe, and the newest offering from Stuttgart, the Macan SUV. At this visit, I was presented with the keys to Porsche’s first four-door luxury car: the Panamera. 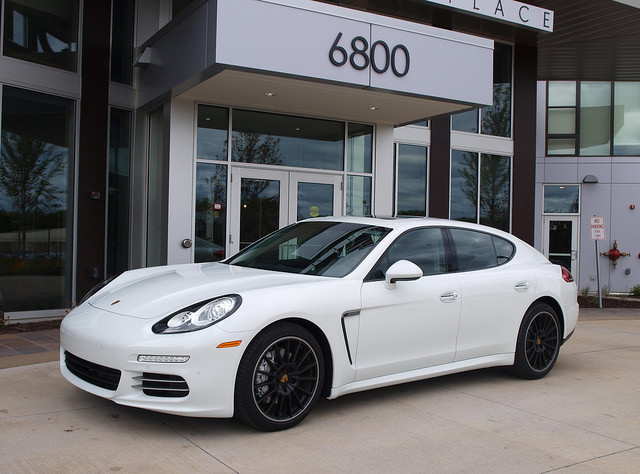 The Panamera has been around for a few years. Most of the reviews I read and watched focused on the bulbous shape that emulated an enlarged version of the brand’s icon, the 911. Some of those reviews railed Porsche for going with such a shape and adding a hatchback to the mix in a segment that calls for an upright sedan with a massive trunk. The truth is that people are buying. After all, it is a Porsche and there are qualities to be expected from one.

Or, is that an assumption that could be proven either way?

Let me be the first to say that I neither love nor hate the look of the Panamera. It is what it is: a Porsche. It is large, about the size of its rivals, namely the Mercedes-Benz S-Class, Lexus LS, Jaguar XJ, Audi A8, and BMW 7-Series. The advantage over these established flagships is the hatchback access to an expandable cargo hold. The disadvantage is access to the rear seat in the standard wheelbase model. If you select the Executive version, then you will find a larger rear door for better exit and entry.

The model I have is the 4S, which means I have a twin-turbocharged V6 and all-wheel drive. More on how that drives later, but the package itself came with black 20-inch wheels that give the big white hatchback four-door a very aggressive look. It certainly made the Panamera pop a bit more out on the road (and in its parking space).

For the driver, the atmosphere is truly befitting of any Porsche. Only a few flagship four-door automobiles coddle the driver in a cockpit-type driving arena. In essence, Porsche made the Panamera coupe-like for the driver. Though everyone appears to sit low, you can enjoy the Panamera upright. The center consoles are high, above leg height. There is a multitude of switches to control drive modes and climate control, all centered around the shifter for the PDK transmission. Steering wheel is a standard matte black style from “lower” Porsche models, which is fine with the controls on it. That would include the flip switches for manual shifting control. There are five dials of information in the instrument binnacle. The tachometer in the middle in a matte gray background, while the speedometer is off to the far left. A TFT screen is to the immediate right with great navigation graphics and vehicle/fuel economy information. Off the center is a touchscreen that is easily accessible thanks to the high center console. 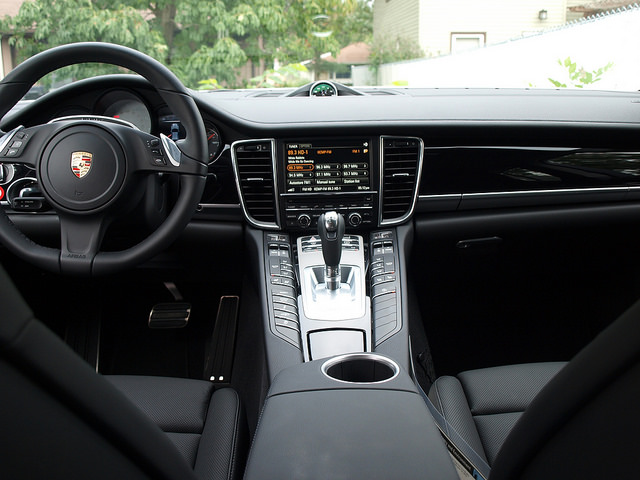 There are four bucket seats in the Panamera. Each one has a high back with integrated headrests. They are actually very comfortable and well bolstered. Power adjustments are available up front, while rear seat passengers get their share of center console switches for climate controls. One thing to consider is the lack of cup holders in the Panamera. One answer I would give is to “get over it” because it is simply a Porsche. One cupholder up front is plenty.

You can get a higher quality audio system with the Panamera 4S, but the standard 11-speaker system is simply superb. It is much better than most audio systems found among its competitors. You also get SiriusXM, though app playback is done through the Bluetooth connection. Phone connection is also superb.

One advantage to the Panamera above its competitors is its hatchback. The trunk area has a high floor, but a very wide self-operating opening. With the rear bucket seats up, you only get 15.7 cubic feet. With the seats down, there is a total of 44.6 cubic feet of cargo room. What flagship sedan could offer such cargo space?

The Panamera has a choice of engines, depending on which model you choose. The 4S has a 3.0-liter twin-turbocharged V6 with 420 horsepower. According to Porsche, it can go from 0–60 MPH in 4.6 seconds and has a top track speed of just over 177 MPH. Without testing these figures out for myself, I will attest that the Panamera 4S is quick and very enjoyable to drive at any speed, within set limits, of course. The 7-speed PDK automated transmission is connected to this engine sending power to all four wheels with its Active All-Wheel Drive system, part of the Porsche Traction Management system. 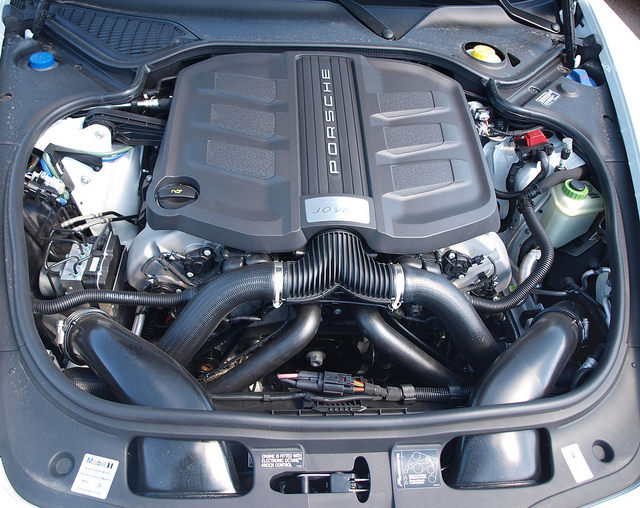 I will admit being very surprised by the Panamera. For being a big four-door flagship, it actually drives like a real, honest-to-God Porsche…and then some. The ride is up there with its rival flagship sedans. Just simply smooth, even in Sport mode. Switch it into Sport Plus and things firm up quickly. Yet, the ride in Sport Plus is not as unyielding as with its sports cars in the same drive mode. Still, the Panamera is a stable and solid driver no matter which surface it will find itself on. Cornering yielded another surprise: a feeling of roll in the standard setting. That can be quickly resolved by switching to Sport Plus where cornering is absolutely flat through at any speed. Steering is responsive with excellent on-center feel. Though it may be a big car, you will be surprised by how tight the turning radius is when at full lock. Brakes are also superb with good response in normal and panic situations.

Fuel economy could be a concern for those who care about the bottom line in running costs. In my time with the Panamera 4S, I returned an average of 18.0 MPG, which was about what I expected from this car. The sticker, however, states that this model should average 19.0 MPG.

A V6-powered, rear-drive Panamera starts at $78,100. This well-equipped 4S example came with a sticker price of $113,935. Panamera models include a V8-powered GTS, two levels of turbocharged V8 power and the option of an extended wheelbase Executive model on select engines/trims. Also available is the Panamera S E-Hybrid, which adds a plug-in electric motor to a V6 engine. 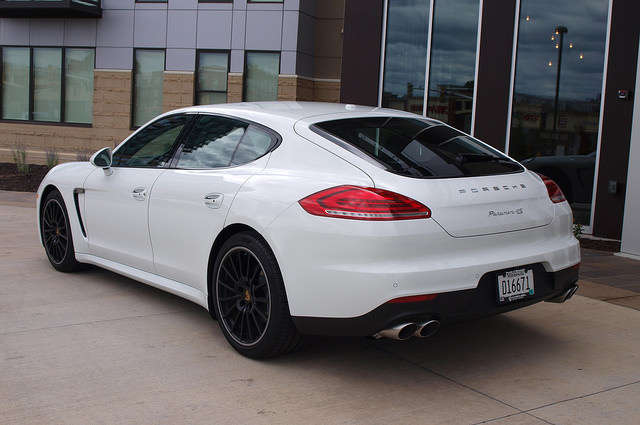 A new showroom is an attraction in itself. Yet, it needs to have the products to attract customers to it. Inside the new Porsche store in Golden Valley, you expect to be greeted by a 911 and other icons on the lovely white showfloor. The Panamera also looks fantastic inside the new space. It even looks better on the road. In fact, it deserves to be driven anywhere you take one. Whether out on the countryside or in town, the Porsche Panamera could be one of the most rewarding flagship sedans one might even own. 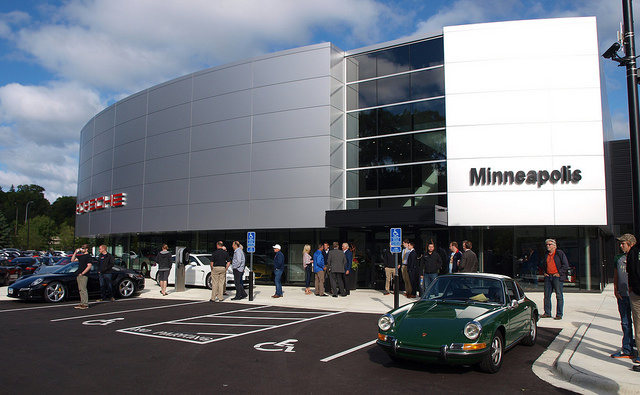