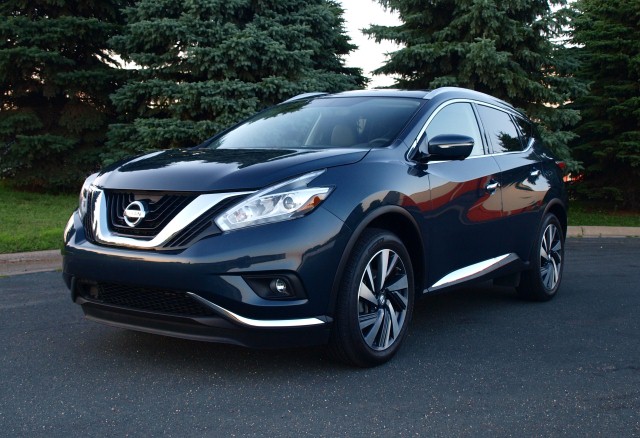 We love those who win awards.

That is why we watch the Academy Awards…and the Tony Awards too! How many award ceremonies have you been to when the excitement hits of the announcement of who won which accolade? Lavender magazine’s staff and contributing writers know this feeling all too well, as we’ve won our share of Minnesota Magazine Publishing Association Excellence Awards.

We love winners and, sometimes, the winners love us back.

Recently, J.D. Power and Associates announced the winners of their APEAL (Automotive Performance, Execution and Layout ratings) survey for 2015. The survey is conducted with new car buyers to find out their experiences with their purchases within the first 90 days of ownership. The APEAL survey looks at “things gone right” in eight categories of vehicle performance and design: engine/transmission; ride, handling and braking; comfort/convenience; seats; cockpit/instrument panel; heating, ventilation, and cooling; sound system; and styling/exterior. Scores from these categories are compiled and calculated for each segment as an overall snapshot for each brand.

It did not surprise us to find out that the Top-Rated Midsize SUV for 2015 was the all-new Nissan Murano. It simply looks like a winner, but is it deserving of its early accolades? With this Artic Blue Platinum AWD model at our disposal, we had to find out.

There are two reactions once you see the Murano at first sight. One would be negative, with the other being positive. It is a polarizing design, but one that will grow on you. Nissan took a risk by pushing the envelope of their current design language to sculpt the Murano’s new shape. It fits this two-row mid-sized crossover’s history, as it has always been a polarizing vehicle. Yet, Nissan’s modern design tenets were expanded with deeper scalloping, shaping, and use of chrome accents to dictate key elements of the Murano’s exterior. 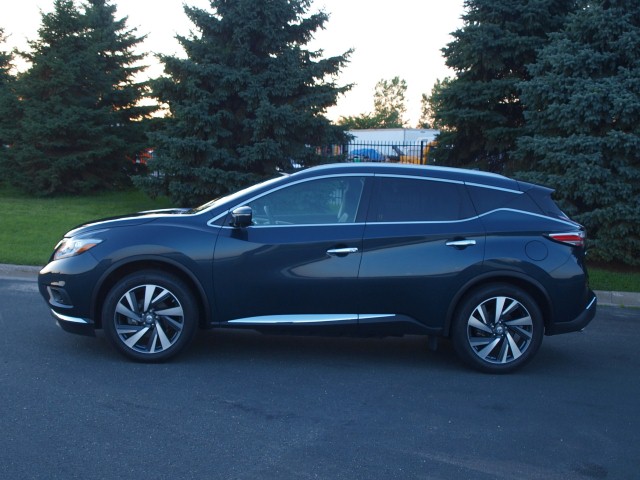 For example, the “floating roof” is in itself an optical illusion. At the C-pillar, one could not tell where there is a piece of glass between the chrome frames. If you look closely, there is, but only covering half of the pillar. Other clever design tricks include the grille design with its “boomerang” headlamp units with the same shape in the rear. Yet, these three elements were drawn out more than any Murano…or Nissan…before. They provoke the eye to embrace a piece of mobile art that is as practical as they come.

The doors open wide with huge step-ins for all passengers. The tailgate opens up high and wide as well. In this Platinum trim, the use of chrome is tastefully done as set within the shapes of the body. A set of 19-inch alloy wheels finish off the Murano’s look, giving it an accessible, attainable feel even though it looks more expensive than its price tag indicates.

This theme carries over into one of the best interiors ever designed by Nissan. The quality inside of the Murano is so top-notch that one could easily mistake this for an Infiniti. The Platinum model is a prime example, with its brushed silver trim complimenting the exclusive Mocha leather upholstery. The cabin is well laid-out for optimal room for five along with a focused driver’s cockpit.

A wider TFT screen dominates the instrument binnacle. The graphics are great with a clear readout for trip, economy, and vehicle functions. The speedometer and tachometer were pushed to the side, but still fully readable by the driver at a glance. Controls are great and tactile to work with. The center stack has an air of excellence with its large touchscreen and excellent climate controls. The screens on the infotainment system are improved with better audio readouts and an improved navigation system. NissanConnect also facilitates mobile app use with the touchscreen system. Bose provided nine standard speakers plus two subwoofers for good sound throughout the cabin. Bluetooth connectivity was good, also allowing for streaming from the smartphone, along with USB connectivity both front and rear and the addition of HD Radio. 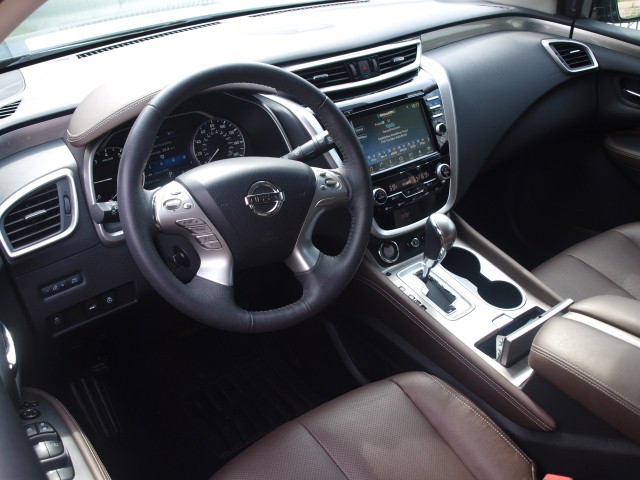 The best way to describe the seating in the Murano is “cushy.” The leather is soft and truly fitting of a more premium vehicle. While comfort was excellent, bolstering could have been better to lock in the driver behind the wheel. Rear seat room is exceptional with excellent headroom and a flat floor. You can seat three average-sized adults in the back seat. Cargo space was large with 39.6 cubic feet available behind the second row.

The power should be a bit familiar. The VQ35 V6 may be the same 3.5-liter version found on many Nissan models. With 260 horsepower available, this engine had no trouble putting 4,017 pounds of all-wheel drive crossover on its back. Nissan’s Xtronic continuously variable transmission has certainly improved with better transitions between ratios to handle traffic conditions and in-town driving. This model had a solid all-wheel drive system which should prove useful in inclement weather — and our winters.

The cushiness of the lavish interior was translated onto a smooth riding platform that is relaxing and enjoyable to drive. Road imperfections were managed quite well with absorbent shocks and suspension systems. On the flip side, handling is also on the soft side. With curves, gentle care would have to be taken on them as it will lean and roll a bit at the limit.

On-center feel of the steering was also on the soft side. There was definitely some play in the wheel. Turning and steering action was on point with precise turns accomplished without fail. Brakes were fine with solid stops observed in normal and panic situations. 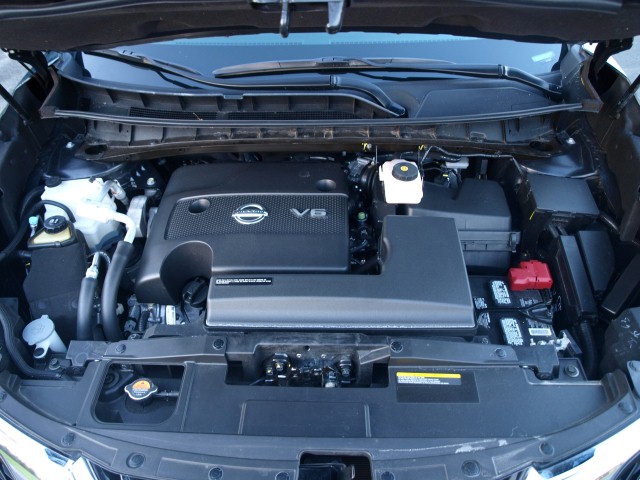 Where the Murano comes into its own is with its active safety features. The Intelligent Cruise Control truly helped in keeping pace with traffic. This Murano also came with Blind Spot Warning, Rear Cross Traffic Alert, and Motion Object Detection, all enhanced with the Around View Monitor, providing a 360-degree view all around the vehicle.

The Murano is a mid-sized, two-row crossover. It could mean great efficiency or poor gas mileage; however, the Murano achieved 24.4MPG on average in our care. Not bad for this kind of vehicle.

A front-wheel drive Nissan Murano S is priced from $29,560. This top-of-the-range Platinum AWD tester came with a sticker price of $43,955. Though it may seem like it is on the high side for a mainstream two-row mid-sized crossover, it is an excellent value for those looking for something more premium in looks and feel.

Where Nissan needed to drive toward regaining leadership was to create a product that both polarizes and delights. The Murano is the first in a line of these vehicles that will bring people back to the brand in solid numbers. Ultimately, these customers will buy the smaller Rogue, the mid-sized Altima, and compact Sentra sedans. The Murano’s role is to attract these customers to the dealerships. In its own right, the Murano states its case by executing with a great design, a sumptuous cabin, solid performance, and the highest quality build possible.

When it is executed at once, that is a sign of a winner. 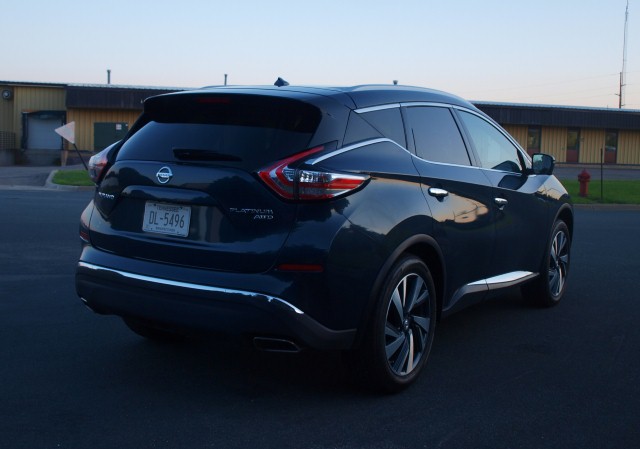