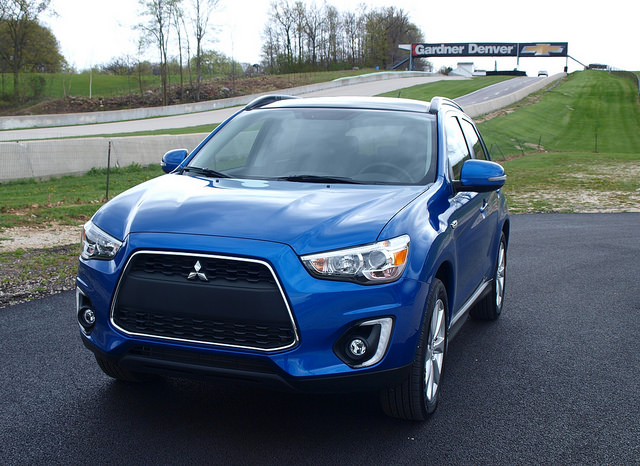 Which automobile is one of the most popular ones in our community today?

Subaru is a correct answer. It is nationally, as well as locally; however, there is a different truth to tell, especially in the Twin Cities. And, this may or may not surprise you: one of the most popular vehicles in our local GLBT community is a Mitsubishi.

This is a surprise to those who have been watching Mitsubishi’s recent history. After the debacle of “zero” financing for a year campaign over a decade ago, Mitsubishi has found its stride nationally. Sales are up in the double digits, led by the Outlander Sport subcompact crossover and the Mirage subcompact hatchback. Locally, the Outlander Sport has been leading the charge for its value and all-wheel drive option to get through the winter here in the Twin Cities.

Our community has embraced the Outlander Sport, as well. There are many reasons why. It is versatile, capable and small enough to handle urban traffic. You can park this anywhere. Plus, its height advantage helps in seeing above the crowd when called for.

Back in January of 2013, Lavender reviewed the Outlander Sport just after a refresh and an initial production run at the Normal, Illinois plant. A 2015 model arrived with several updates and upgrades. The most significant news on the Outlander Sport is that a whole new vehicle segment has been created around it. This year alone, five new competitors will join Mitsubishi in the subcompact crossover/SUV segment. Now that it has company, will it still be one of our favorite new vehicles?

New for 2015 is a pair of LED running lamps framing the fog light area on the lower bumper. It is that crowning touch that makes the Outlander Sport stand out above the rest. It still offers the Lancer-influenced blunt front end leading a stubby crossover silhouette that speaks to practical minds toward its intended use. The doors are big — a huge selling point in this segment — and the liftgate opens up to clear a tall person’s head for loading the cargo hold.

Most vehicles are sold on looks. The Outlander Sport is no exception. Though it is sort of a “cute ute”, it is really all business. Importantly, the ground clearance is right for our climate: 8.5 inches between the frame and the road…or lack thereof. Not to mention, you can spot these easily to see where you are parked; that is also a huge selling point. 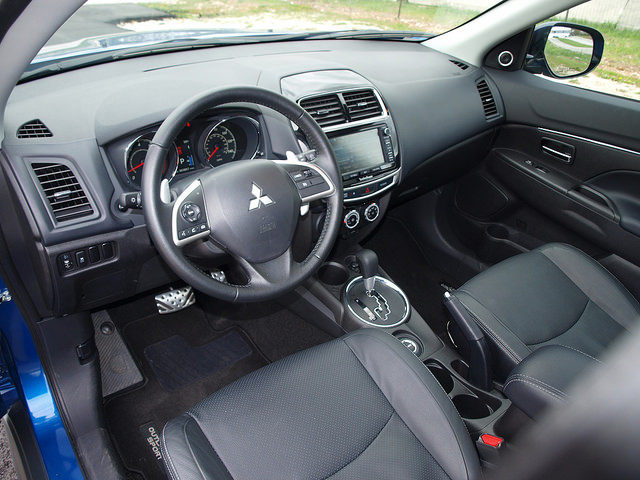 The changes inside are many compared to the last time we had the Outlander Sport. A new steering wheel is one, following current Mitsubishi design elements. Glossy piano black trim on the center stack denotes the new GT trim, which raises the luxury and sport quotient a notch from before. This is the first time we encountered an Outlander Sport with leather — a sporty feel with perforated cushion and backrest areas. It is a thick hide of leather that feels great and looks good with contrasting stitching.

Even better is the latest touchscreen infotainment interface seen on most current Mitsubishi models. It is a cleaner screen than before with better audio and navigation controls for easier setup and quicker response.

The rest of the Outlander Sport’s interior remains the same, familiar and quite good. The seating position is now power-adjustable in the GT, which opens up plenty of possibilities to get comfortable. The seats themselves are big and comfortable. A bit more bolstering in the seatback might help to keep us locked in a bit more. Room for five is possible. Rear seat comfort is very good overall. This tester came with a panoramic roof with LED lighting accents. Though one would want a sliding part to open up, there is an uninterrupted pane of glass to see what’s above for the passengers’ enjoyment.

Cargo space is generous, starting at 21.7 cubic feet with all seats up, expanding to 49.5 cubic feet all the way to the front seats. In all, it is a tall and wide space to load up for the journey. One thing to keep in mind when loading up the rear: watch out for the Rockford Fosgate subwoofer, if equipped.

The infotainment system came with Bluetooth connectivity for audio files and, if enabled from your smartphone, Pandora playback. Nine Rockford Fosgate speakers take care of the rest emitting 710 watts of clean sound around the cabin.

One complaint pundits and Outlander Sport owners had was the lack of power underfoot. Mitsubishi asked whether more power could be achieved with a larger engine or a turbocharged version of the same standard 2.0-liter MIVEC four-cylinder mill. For this market, Mitsubishi chose the former, the 2.4-liter version of the MIVEC engine. Power goes up to 168 horsepower, while torque is raised to 167 pound-feet. Mitsubishi connected this engine to the Continuously Variable Transmission and offers this in both front-wheel drive and All-Wheel Control. Our tester came with AWC, the best configuration for us. 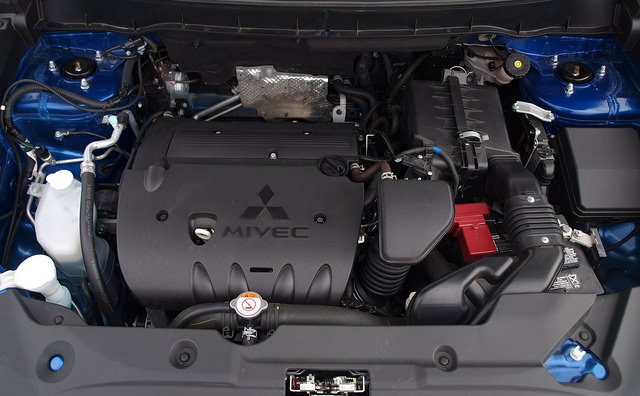 The result was better performance overall. I picked up this Outlander Sport GT 2.4 at Road America in Elkhart Lake, Wisconsin where it was a part of a media event for regional automotive pundits. Over the course of 328 miles, I felt the extra power when it called for it. The Outlander Sport did extremely well on lonely highways, traffic jams, and just passing up long-haul trucks along the way. Passing power was definitely improved with the larger engine under the hood. The response from the CVT was better. This was a good move overall to go with the larger engine as an option to the standard 148-horsepower 2.0-liter motor.

When driving the Outlander Sport, you will appreciate how well it drives, even with the smaller 2.0-liter engine. There had been improvements on ride quality thanks to an approach toward a balanced ride that absorbs bumps and potholes extremely well, even with an 8.7-inch ground clearance. That ground clearance also yields softer corner with some lean and roll through the turns. The steering wheel is perfectly weighted for better control and on-center feel, yet it adequately provides enough effort in turning. It has a tight turning radius, which makes getting out of tight situations easier. Brakes are very good with good power on normal and panic stops.

The main reason why many of us bought Outlander Sports was because of its overall value. The base price for an ES 2.0 model with front-wheel drive and a manual transmission is $19,545. This GT 2.4 with AWC came fully loaded with a sticker price of $30,495. You can get the larger 2.4-liter engine in the ES trim starting at $21,295. 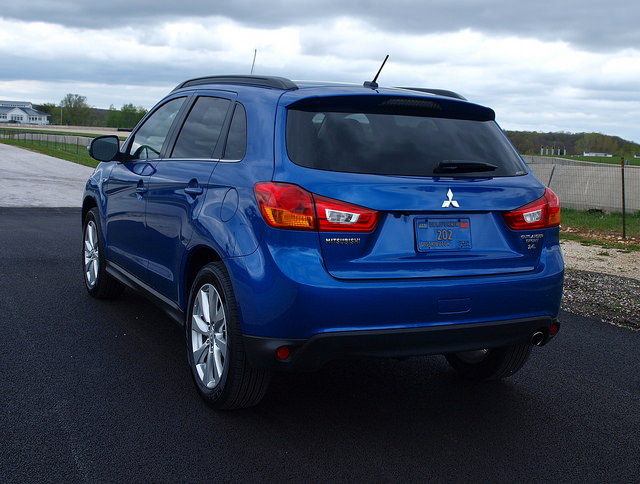 The Mitsubishi Outlander Sport has been around for quite some time. It is holding up very well, even with five new competitors giving chase to it. It is also getting better; the larger engine is proof of this. Any advantage the Outlander Sport can get in a growing segment will help. After all, it is definitely one of our favorite cars these days, a well-deserved position for a brand that continues to grow.