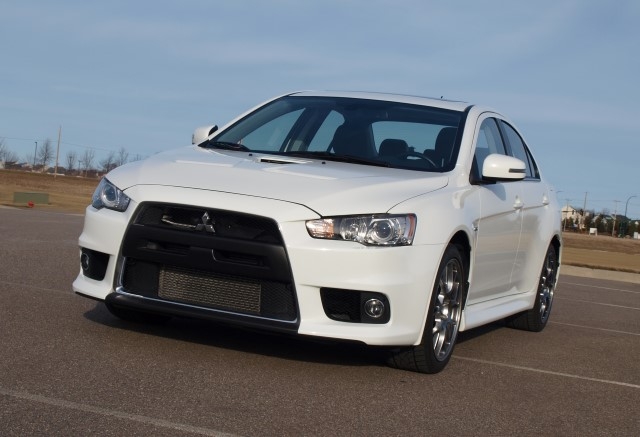 All good things must come to an end.

It must have been a tough decision for Mitsubishi to end its run of Lancer Evolutions. They were the focal point of the brand, exuding the highest level of performance worthy of track day endeavors or several grueling rally stages. Though the world enjoyed these high-performance compact sedans, we Americans only caught the last three renditions of these legendary machines.

Each one was born to race. They were made to conquer any territory – from tarmac to dirt – with brute force from its all-wheel drive system and booming turbocharged engine. It also helped to have Hollywood champion these icons of hoons on the silver screen. The late Paul Walker of The Fast and the Furious series turned these Evos into something desirable to drive for a generation of fans.

In my work, I am surrounded by those who are fans of the Evo. Some of them became owners, including you; however, I have never experienced one behind the wheel. Always in the shotgun position, but never driving one. That changed last May at Road America in Elkhart Lake, Wisconsin, when I took a 2015 Evo MR into the surrounding community away from the track. It was quite the experience. Yet, it was not enough for me to truly understand the reasons why you love these cars.

So, I asked for another round, right here in our backyard. The last Mitsubishi Lancer Evolution – save for the limited production Final Edition – to be written about by anyone, anywhere.

It is time for one final ride. 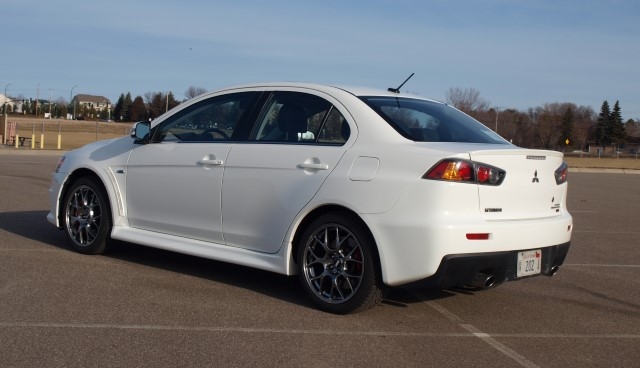 The Lancer first arrived for the 2008 model year. It sported a design language that carried over through most of Mitsubishi as a way to distinguish itself from everyone else. It worked, though Mitsubishi had problems with maintaining its presence in this country. That affected sales of the compact Lancer; however, there was one particular model that drew the hardcore enthusiasts in: the Evolution X. Available from 2008, the Evo remained the main draw into Mitsubishi showrooms. It was a dream of those who want to tackle great feats of driving, a flight of fantasy to those who have never experienced its superb thrust and road holding.

If you strip the front clip, wheel/tire combination, body kit, and spoiler of the Evo, the Lancer is pretty ordinary. While it underwent some updates for 2016, the Lancer is pretty much a basic sedan with some minute flair to show off. By adding those other body bits, beefing up the seating, engine, transmission, suspension, brakes, and drive system, the Evo becomes the proverbial “wolf in sheep’s clothing.” Only the observant know what to look for in order to get out of its way.

An Evo was not meant to own a supercar’s look. Nor does it have to be the sexiest-looking car in the world. It is meant to own the road, and the overall design is specifically crafted into such. Aggressive is the best way to describe the Evo. With the front clip, body extensions, tire/wheel package, and spoiler, it is a brash figure with more than enough swagger that it doesn’t need an app to attract whomever comes into its field of vision.

Yet, it is that look that distinguishes itself from the others. Usually, the Evo has a huge wing in the rear. Our 2015 Evo MR tester only had a rear lip of a spoiler. Though the rest of the body speaks “Evo,” the MR’s lack of a large spoiler gives it a stealth look that truly befits its “wolf in sheep’s clothing” image. Yet, its 18-inch BBS alloy wheels do give away the fact that this is indeed a competition-bred machine. 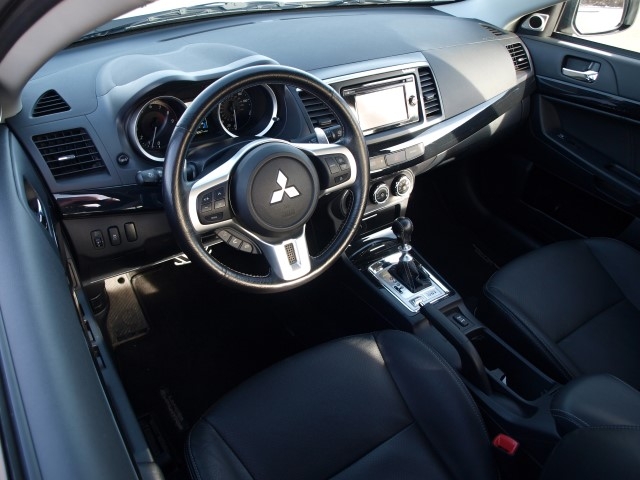 Normally, an Evo would offer its front seat occupants a pair of Recaro seats with race car comfort and support. The MR deletes these seats in favor of a more comfortable, conventionally designed pair of leather-upholstered chairs. They provide good support in the cushion, but the seatback offers lower side bolstering only. If you have a wider back, these seats will be fine. Rear seats are normal with the same leather upholstery, and it yields decent room for people six-feet tall and under. Trunk space is very limited, thanks to the lack of depth with the battery and windshield washer portal placed in-between it and the rear seats.

One does not expect the latest and greatest instrumentation technology or gizmos in an Evo. The dashboard is straightforward and businesslike. Instrumentation is comprised of two big dials for the speedometer and tachometer, a TFT center screen for fuel, temperature, trip, and other readouts, and a simple center stack with the touchscreen audio system and climate controls. There are a few vital buttons on the center console, for the Super-All Wheel Drive (S-AWC) system and for the heated front seats. Only the gear lever remains as a prominent piece of the Evo’s controls.

The steering wheel offers a leather-wrapped thick rim to grip on, along with redundant audio, cruise control, and Bluetooth telephone controls. Mitsubishi’s audio system can play back CDs, SiriusXM, and HD Radio, along with Bluetooth, USB, and auxiliary jack connections to portable devices. Nine Rockford Fosgate speakers are fed through a 710-watt amplifier providing a choice of sound options to fill the cabin. You can get a navigation system as an option in the Evo. 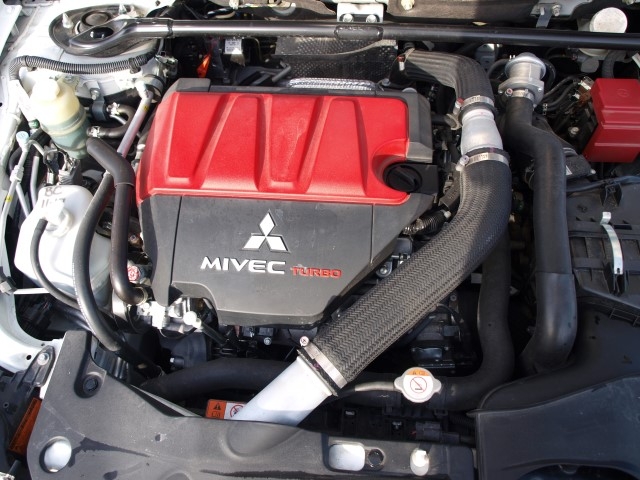 All of these creature comforts are fine to keep you entertained inside of the Evo; yet, the most entertaining part of this car is what lies underneath its body. It starts with a 291-horsepower 2.0-liter turbocharged engine. This monster mill has the task of pulling 3,571 pounds of competition-bred machinery. It does so with brute force. The GSR and Final Edition models offer the driver a third pedal to row five forward gears in its well-matched manual transmission. Our MR tester came with a six-speed Twin Clutch Sportronic transmission. It will not be the smoothest “automatic” transmission around, but it certainly gets the job done in sending those 291 horses to all four wheels via the S-AWC system. In Normal, it works just fine. Flip the transmission into Sport and you might be looking for a motorsport venue to play in. The revs run higher, the noise is more pronounced and more engagement would be required with the paddle shifters on the steering column.

The noise being referred to is from the exhaust pipe. We often talk about vehicles being quiet or trying to, at least. You expect noise from an Evo. It is a constant reminder of what this car was intended to be – performance driven for competition. To be clear, you don’t expect an Alfa Romeo, a Ferrari, or a Lamborghini to be quiet. Neither will a Mitsubishi Lancer Evolution. In fact, some owners have gone further to make their Evos even louder.

If you dare, there is a Super Sport mode. This is the Evo’s launch control system. What does it do? It simply quickens the start off the line. If you know what you’re doing, then go ahead and try it. If not, please do not touch it.

You also do not expect an Evo to be soft and cuddly on the road. The suspension is firm and you feel everything – bumps, expansion joints, cracks, and all other road imperfections encountered every day. The trade off is near flat cornering and an aggressive steering system that is heavily weighted for the toughest of turns. Turning radius is fine, but wheel-to-road response is quick. Brembo provides the quickest and most powerful brakes this side of a Porsche. They stop extraordinarily short in both normal and panic situations.

In terms of fuel economy…well…it is not economical for a compact car. According to the Environmental Protection Agency, the Evo MR was rated at 17 MPG in the city, 22 MPG on the highway. We averaged 16.1 MPG in our care. An Evo is not about fuel efficiency, it is about the absolute driving experience. 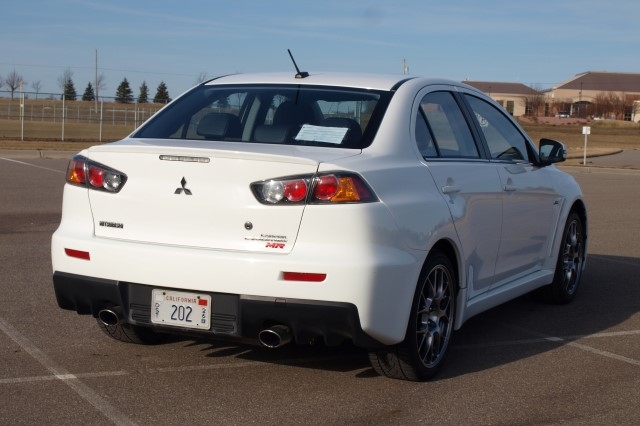 That is what separates the Lancer Evolution from everything else: the experience of driving one. You don’t need lane keeping, forward collision mitigation, or any of the semi-autonomous active safety technology now permeating in today’s automobiles. You just have to know how to drive. The Evo has a strong steering system to keep it between the lines and your right foot is your best mitigation to not crash into anyone or anything. Driving the Evo does not require a driver’s training day on the track, but it certainly does help to become competent behind the wheel of this car. There is a lot of power being put down in a concentrated package.

How do you say “good-bye” to an icon? This one ruled the rally circuit for decades, became a movie star, and became the dreams of many young enthusiasts that were inspired by Walker, Vin Diesel, Michele Rodriguez, and company. It has become a track day superstar, as well as a headache to local public safety departments.

The Mitsubishi Lancer Evolution is an icon in every sense of the word; yet, it can carry people along in a quick manner. Still, one does not drive an Evo for practical reasons. It is for those who want a bit more adrenaline in their lives. For those who seek track stardom on the street, there are only a few left to call your own.