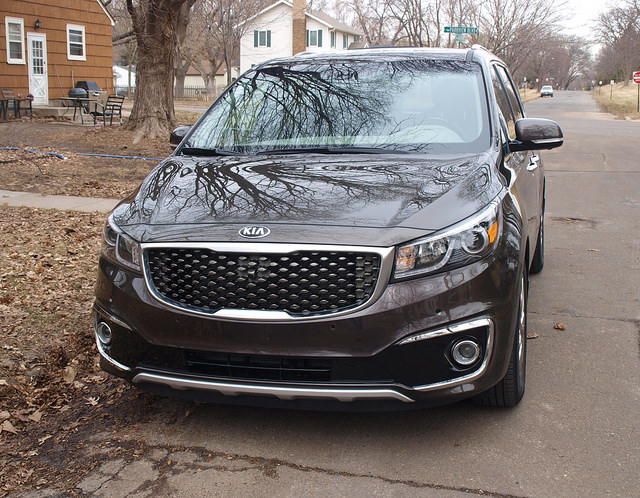 At Lavender, we are presented with a lot of different vehicles to write about in our Ride Review. In the course of going through these vehicles, we find that you drive a wide variety of them. Some may defy stereotypes – and that is a good thing.

One such vehicle is the minivan. Lavender already covered a couple of them – the Dodge Grand Caravan and the Honda Odyssey. They are among the standard bearers of the class.

With all due respect to Fiat Chrysler Automobiles and American Honda, your offerings no longer cut the mustard. There is a new minivan out there that will change everyone’s ideas of what one is. One might say that they have made the minivan more car-like…OK, more crossover-like. They have upped the ante in terms of what one could actually do…and provide to its passengers. It may be the single biggest advance in the 31 years of the breed.

That vehicle is called the Kia Sedona.

Its debut at last year’s New York International Auto Show stunned practically everyone. Thought that minivan design could not go any further, the team at Kia came up with a shape that grafted a crossover-like front end to a modern van body. This is not a new concept, as it worked back in 1975 for Ford, when the Econoline received an extended, boxy nose for its full-sized van. This changed the van business in North America forever.

The advantage of the extended nose on the 2015 Sedona will benefit mechanics. Open up the hood and there is full access to the engine – including the rear set of cylinders and spark plugs. You do not see that in any other minivan – do you?

Keep in mind this is the third generation of Kia’s minivan. These new design elements present a complete leap in advance for Kia and the minivan market, However, there is more to discover…

The Tiger grille gets a bronzed look for the Limited model to go along with its brown paint. Chrome accents and allow wheels bring out the sparkle this top of the line Sedona had to offer. There is a lot of glass area in this minivan, also a huge benefit to eliminate blind spots, though there are enough active safety features monitoring those areas, along with a 360-degree camera. In all, this is currently the best looking minivan in the market – sporting the best field of vision around! 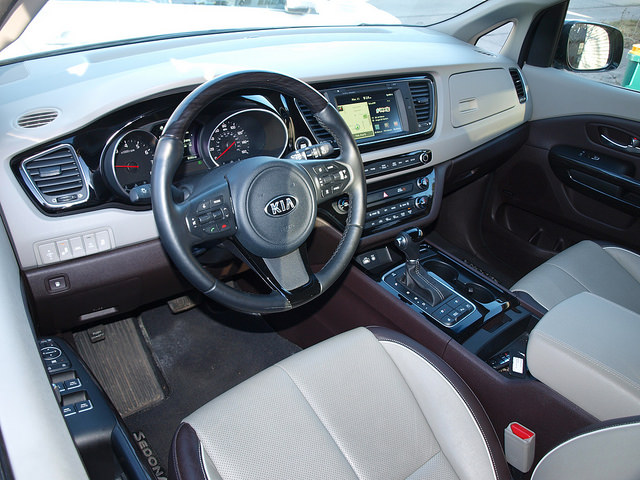 Where the Sedona distinguishes itself from all other minivans is right inside the front doors. For years, minivans always had a van layout – gear selector on the dashboard, controls high up and a very upright feeling not unlike a larger cargo van. Kia decided to envelop the driver with a familiar and true car-like cockpit, replete with center console and the gear level located right on it closer to the driver. The dashboard has a mix of the Optima and the Cadenza from its straight-forward instrument binnacle to its center tack-mounted large touch screen. Switches and controls have been upgraded to at least the Optima and a very familiar to Kia owners. In all, this is one upgraded that was needed to keep families interested in the minivan.

On the Limited model, there is another key upgrade that would elevate the breed. All one needs to do is to stow the third row into its large compartment at the tailgate, push each second row captain’s chair back, recline and pop out the foot rests. What you did was turn a seven-seat minivan into a four-seat luxury conveyance that feels like a private jet. It is the ultimate Uber/Lyft machine! What is missing is a little console with a cooler, a bottle of Moet and two champagne flutes – neither are available from Kia, mind you.

If you choose to transport seven people in total, the Sedona is a rather comfortable place for them. The second row does adjust back and forth, along with the distance between the two. Rear seat passengers would have to tumble either second row seat for access to the third. Even adults would enjoy a comfortable existence inside the Sedona SX Limited. Lower models get the innovative Slide-N-Stow second row seats, which would fold up the second row against the first row for better third row access or to allow for larger cargo to load, especially when the third row is completely stowed. 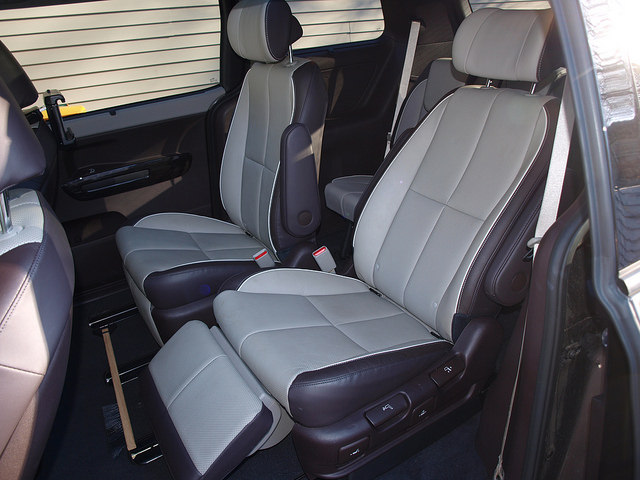 Infinity supplies the sound for the UVO-driven surround sound infotainment system. Though there are six speakers, including subwoofer, to emit great sound throughout this cabin, it certainly fills it well. Add UVO eServices, quick Bluetooth connectivity and plenty of audio options, and everyone will be thoroughly entertained.

Under the hood is the 3.3liter V6 with 276 horsepower on tap. A six-speed automatic sends that power down to the front wheels. This combination is not bad, though there was some hesitation when having to do some quick acceleration on highway ramps and passing maneuvers. Otherwise, it offers smooth power at speed and smoother shifts form the transmission. Consider that this driveline needs to pull 4,720 pounds of minivan around – that is a lot of weight to tax!

Minivans are expected to have smooth rides that would not offend anyone in the back. The Sedona has perhaps one of the best suspension setups in the business, resulting in an absorbent ride that keeps things from dipping, dropping and going wayward. It is extremely smooth on every surface. Cornering showed a bit of roll and lean, though under control. Still, there is a lot of stability in play in the Sedona to keep everyone happy on board.

Though the steering wheel is big, the reaction from that wheel is very good. The electric system tracks very well and can do pretty tight maneuvers, despite its size. Brakes are also very good with nice modulation. Expect good stops in normal and panic situations.

Minivan owners would be grateful for good fuel economy from their vehicles. The Sedona captured an average of 20.2MPG. According to the sticker – this is above the expected average fuel economy for the Sedona. 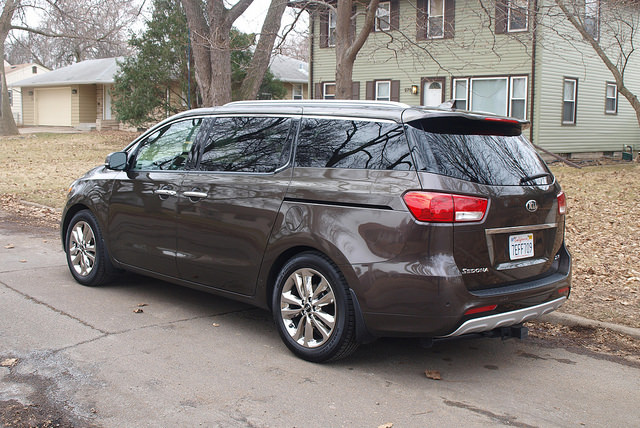 The Sedona lineup starts from $26,100 for a family-budget friendly L model. This tester is the top of the SX Limited model with a sticker price that fits the high content on board. How much? How about $43,295? It is on the high side, but look what you get in the Limited compared to its top end rivals?

Typical minivan consumers may not actually buy the Limited. There is a lot to offer across the range in the Kia Sedona that would rival its competitors. No, it does not have an on-board vacuum and its middle seats do not fold into the floor. But, what the Sedona does otherwise is fantastic.

The driver will be happy since controls will be closer to him or her than any other minivan. Passengers of all kinds will be happy because of the options they will have to optimal comfort. Pets will be happy for all the places they can roam behind the front row of seats. It just seems that the new 2015 Kia Sedona is a vehicle that will make everyone happy.

And, happiness aloneis the best factor in choosing the right vehicle. That includes minivans.