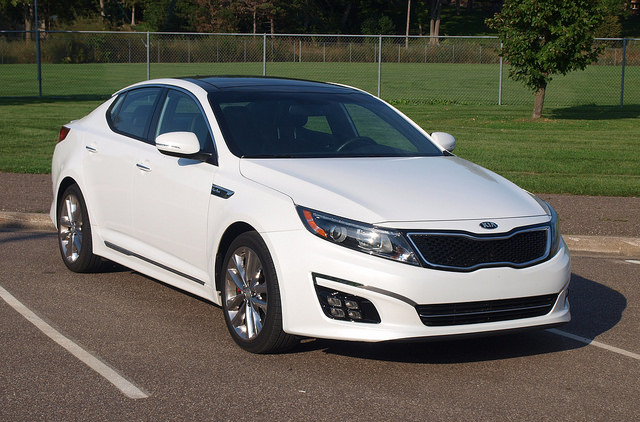 After 20 years of selling cars in North America, Kia has hit its stride. They have a lineup of automobiles, crossovers, and minivans that people are considering heavily against some more popular choices. In fact, you are a part of Kia’s success. Look how many Kia Souls you bought! That is the kind of vehicle we like: small, different, and very practical.

The Soul, along with the Sportage and Sorento to name a few, would not be possible without its most mainstream product. This particular sedan shook a lot of people’s perception of what a mid-sized family sedan should look and feel like, not to mention how such a sedan should drive. The result is one good-looking sedan, one that has been with us for five years now.

It was already announced that its replacement is coming soon. I figured it was a good time to get in a drive of the stunning third generation Kia Optima before the new one arrives. To say “goodbye” to the fantastic Optima, we received a 2015 SX Limited model to do the honors.

With every new or thoroughly revised entry into the high-volume family sedan segment introduced since its arrival in late 2010, we wondered if the Optima can hold its own with the rest of the crowd.

It is actually one of Peter Schreyer’s masterpieces when he was head of design for Kia. He took a mid-sized sedan and gave it some very compelling lines. The Optima’s greenhouse has two wide door glass areas, giving the C-pillar a distinct design that emulates the profiles of muscle cars of decades past. The chrome frame of the roofline is a paean to the current Jaguar XJ — or, so it appears at some angles. The rear end may appear somewhat Audi-like…more recent models, in fact. Overall, the Optima’s exterior pushed the envelope of design in its price class, and that’s a good thing! It could also be a blessing or a curse, depending on your taste in automobile.

It wasn’t the only thing that piqued our interest in the Optima. The cabin was just as stunning as the body. The instrument panel wrapped around you with touch points that are easy to feel and nice to work with. Switchgear, from the steering wheel all the way to the right on the audio and HVAC systems, just felt right. We were entertained by an awesome instrument cluster that delights my eyes and keeps me informed of everything we do.

The center stack is crowned with a huge screen for the infotainment system and Kia’s excellent navigation system. Included with this system are HD Radio, SiriusXM satellite radio, and Bluetooth connectivity for the phone- and music-files and additional connectivity with the UVO smartphone app. Sound comes from a wonderful eight-speaker Infinity sound system.

You sit nicely in seats that are not only comfortable, but also supportive. SX Limited models feature a “quilted” pattern upholstered in perforated leather, which is very entertaining and bespoke. Rear room is extraordinary for the legs. We need to caution tall passengers to watch their head of the coupe-like rear glass. Tall drivers also need to watch out for the panoramic moonroof which cuts into headroom up front as well. Instead of driving a mid-sized family sedan, we felt like we were driving a sports car instead. Even competitive Audis (the A4), Saabs (a pre-owned 9-3), and Jaguars (it is a stretch, but the XF comes to mind) had more headroom for us to work with. 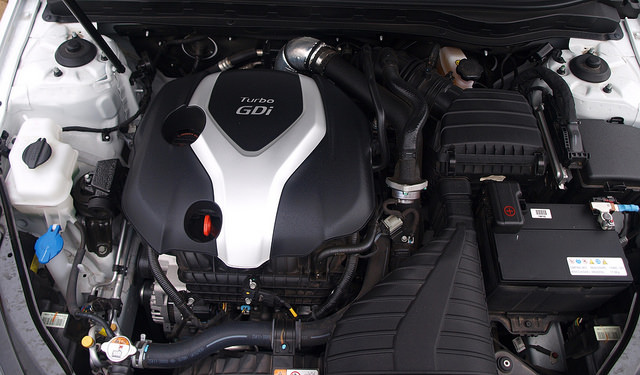 Choosing the SX Limited will get you a very special engine. The 2.0-liter turbocharged four-cylinder mill is perhaps one of the quietest high performance engines in its class. With 274 horsepower on tap, there is minimal turbo lag offering up smooth power up front. A six-speed automatic transmission will send that smooth turbocharged power down to the front wheels without any hesitation.

Ride quality was pretty good when road surfaces are smooth. If it gets bumpy, you can certainly feel each imperfection as you go along. Handling was near flat in the corners and offered minimal roll through the banks. Braking is not bad all around in regular and panic stops. They have somewhat of a soft feel at even moderate stops. Still, the Optima offered a steering set that reacted sharply and induced a tight turning circle. Though it felt somewhat soft, there was minimal-to-no play at center. Drive modes were available to enhance transmission gearing and steering feel, where Sport tightens up those components for improved feel.

In terms of fuel economy, the penalty for having the turbo is having an unwelcome number to go along with it. We averaged 22.0 MPG in the Optima, something that was somewhat expected however. 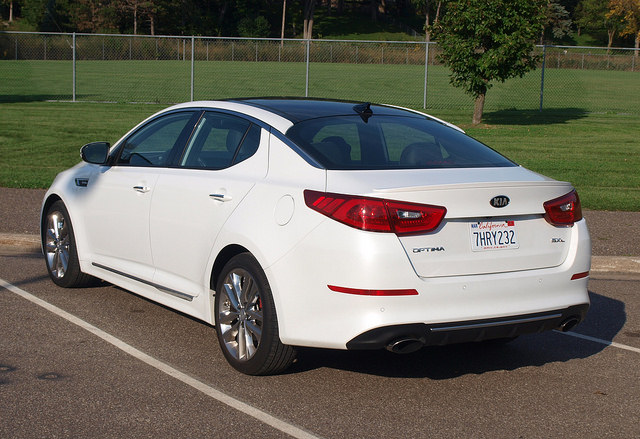 By the time this review comes out, the 2016 Optima would have arrived at your nearby Kia dealer; however, that does not discount considering the outgoing generation at all. It means better deals for what is really a fine mid-sized sedan that broke ground for Kia and set the company on course toward creating fantastic automobiles worth talking about. The Optima simply raised the bar on product quality, engineering, design, and execution. That alone makes the Optima very desirable.

Yet, it is a very crowded field. The products are indeed getting better, including the Kia Optima. Even if you aren’t looking at this 2015 model or the incoming 2016, one would not fault you for buying something as fine as this car. A fitting salute to a ground-breaking automobile.