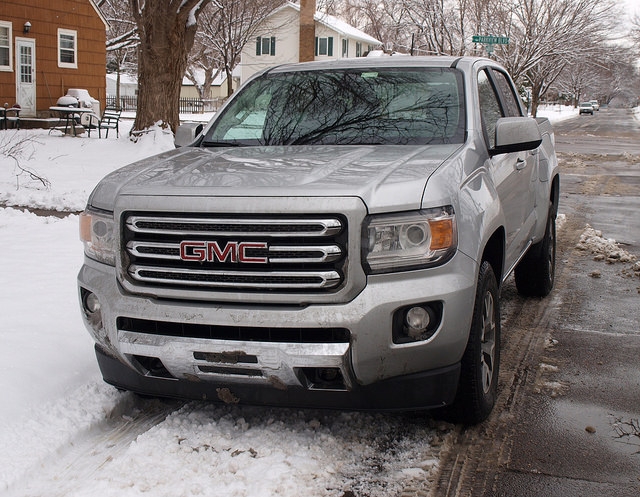 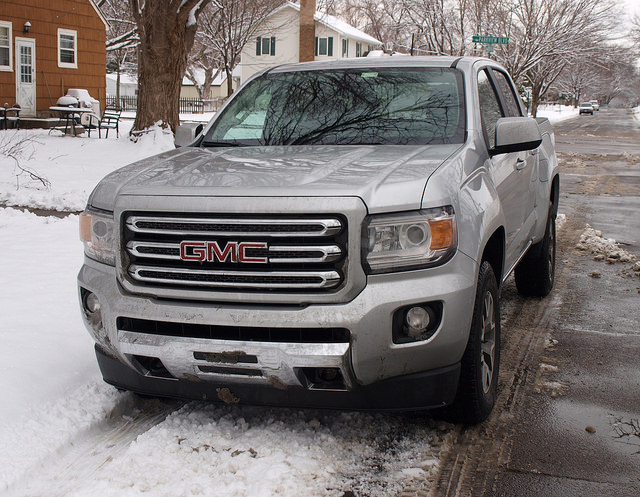 Let’s agree on one thing – the popularity of pickup trucks is a fact no one can ignore.

Full-sized and heavy duty pickups already rule the roost, thanks to consistent sales of the Ford F-Series, Chevrolet Silverado, GMC Sierra and Ram pickups. Yet, there was once a time when “mini-trucks” held their fair share of the market. These trucks paled in the mass and presence of their larger cousins, but they did the job and allowed their owners to have fun with them, as well.

By the end of 2013, the only trucks left in this smaller truck market were the Toyota Tacoma and the Nissan Frontier. General Motors pulled out of this segment a few of years prior, but was mulling over plans for a replacement. The plan was to introduce a new global architecture that would be sold practically everywhere – including the USA. It would also use a diesel engine. Once the latter part was announced, all eyes perked up.

Now, the GMC Canyon arrives – as promised. Alongside the Chevrolet Colorado, the Canyon is part of the “three truck strategy” GM is using to engage new customers. For GMC, it means consistency in design, engineering and offerings. It also means enabling the Canyon as part of a brand positioning apart from Chevrolet and to promote itself as the source for better truck and crossover/SUV products.

To get to the point, how is this as a truck?

As mentioned before, the GMC Canyon is part of the global mid-sized truck architecture. If you compare some of the lines from the global pickup to the North American models, there will be similarities. The frame is about the same, as is other key components. From those points, the North American versions form their own shape. In the case of the GMC, it is turning on the Profession Grade design language with its blunt, huge grille, angles and shapes and an emphasis on an outwardly bold look that speaks to its capabilities.

The configuration of this tester – a SLE Crew Cab with the short box just over five feet long and the All Terrain package – lends itself to be more of a fun truck than one ready for work. The challenge of the mid-sized pickup is to convince business customers of its worthiness as workhorses. If there is a concern, a longer box – over six feet long – is available with either the Extended or Crew cab. That would be a better solution as a work truck. 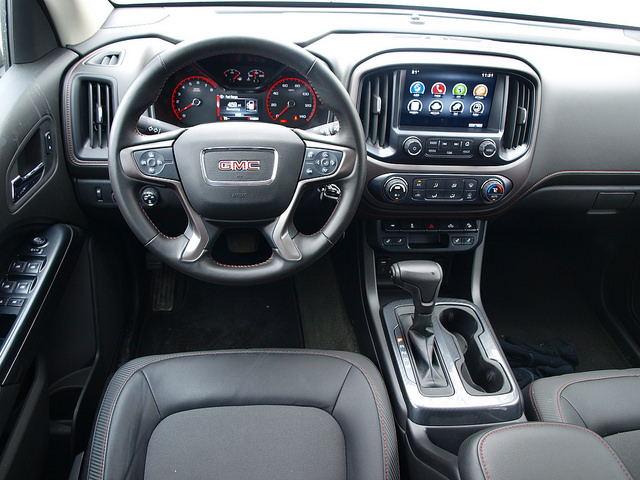 Professional Grade also marks the interior of the cab. Again, only a few things are shared with the global pickup inside, but it is clearly a North American affair. For tall drivers, the instrument binnacle is a bit low, but it is fine for a glance on readouts from the switchable TFT screen and of the instruments. The steering wheel is adjustable for height and rake, fitting most drivers. The Intellilink touch screen is at a high position on top of the center stack, where it is reachable from the driver. That would also include the infotainment and climate control switches. Other switches are clearly for North American use – and great to the touch and control.

In the Crew Cab, four to five adults have ample room on pretty comfortable seats. The All Terrain SLE package offer a cloth-leather upholstery combination with the All Terrain badge embossed on the seatbacks and red contrast stitching. The front seats offer plenty of bolstering for the torso, but wished for a wider cushion with ample bolstering. The rear seats are actually quite comfortable for drives beyond the city.

Intellilink has certainly improved over the years. For example, GMC’s infotainment system paired and connected a smartphone quickly, as well as emulating Pandora on its side without the use of an extra phone application and made radio presets easier to load. Bose offers an available seven speakers of quality Premium sound throughout the cab.

At launch, GMC (and Chevrolet) offered two engines for its mid-sized pickup: a four-cylinder and a V6. This tester had the 3.6liter High Feature V6 connected to a six-speed automatic transmission and a four-wheel drive system with an autotrac transfer case. This combination has 305 horsepower, but only 269 pound-feet of torque. The result is a lack of power at the low end for passing and accelerating. The transmission tries hard to shift as quickly as possible to keep up, it just takes a bit longer. Once it does, then all gears usually fall into place until reaching that comfortable speed. Keep in mind this is with a truck without any load or trailer hitched to it. 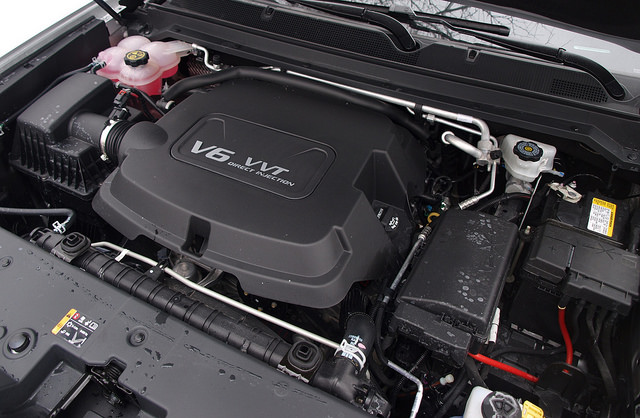 If you are wondering about the diesel version of the Canyon, it is coming for the 2016 model year.

In today’s truck game, owners expect a more civilized driving experience, especially when there is something inside of the bed or hanging off of the tow hook. The Canyon showed that a mid-sized truck can be smooth on good road surfaces to satisfy the first-time truck owner. Cornering had a bit of a lean to it, but it certainly felt competent and balanced.

Turning the GMC may seem easier than its bigger brother – the Sierra. However, it did take some effort to get tight turns executed. Just a turn or two more compared to some full-sized trucks. There is a tighter turning radius due to its size, and it was used to its advantage plenty of times. On center feel is tight and wheel response is very good overall. Brakes are good, though. It does take some stopping distance, but it is indeed shorter than full-sized pickups. Normal and panic stops were linear and precise.

If there is a consideration for buying a mid-sized truck over a full-sized rig, it would be gas mileage. Though the 18.5MPG average would be better than most pickups, it is below what GM claims it would average.

To get a Canyon, you start off with a four-cylinder, Extended cab, long bed two-wheel-drive SL model for $20,955. This SLE All Terrain Crew Cab, short bed model with four-wheel drive came with a sticker price of $39,090. If you keep on ticking the higher trims, options and other configurations, the final price of a Canyon will go beyond $40,000. In contrast, a similarly equipped Sierra 1500 with the same body configuration, a V8 and trim packages will cost another $7,600. 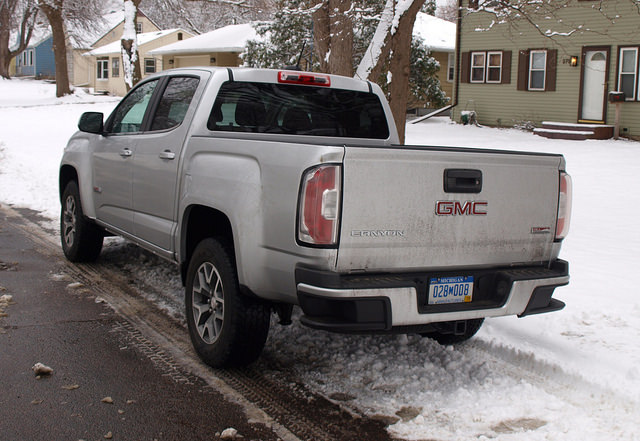 The GMC Canyon looks like it will be a successful truck on its own merits. The Professional Grade look firms up the image for the brand, while enticing us to load up the cab and the bed for adventure – or, work. The interest is very high for both the GMC and the Chevrolet right now. Dealers are trying to keep these trucks in stock – and that is actually a good thing.

One thing that was not addressed was whether the Canyon and the Colorado would spark new interest in the small pickup again. Some manufacturers are watching GM to see how successful they will become. Then, they will jump in. In the meantime, the Canyon is changing everything about the small truck. For that, GM has the slight advantage. In that case, the truck will be even more popular in various sizes for some time to come.