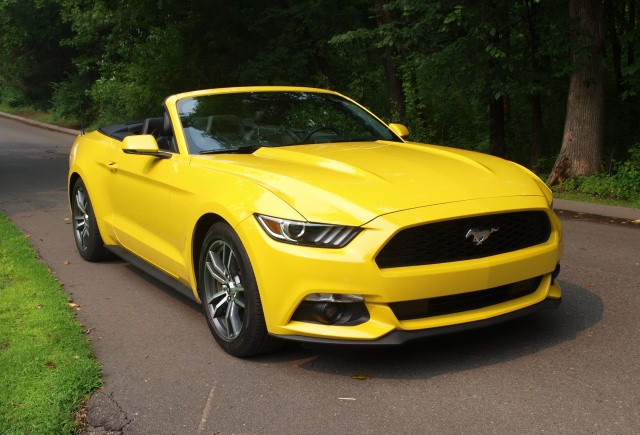 For 51 years, there has been one vehicle that defines America.

It was not by accident. The formula was ripe for the marketplace: a small car with a sporty stance, seating four (at least) with a name that fits its intended use. The result was the biggest launch for a single vehicle of its time. It captured the imagination of young buyers looking for something of its kind. They wanted instant freedom, even in the face of changing attitudes about this country.

The Ford Mustang was what America needed in 1964. It was a constant in our history, even when things weren’t what they were supposed to be. Certainly, the Mustang had its ups and downs over the years, but a world without one is simply unimaginable.

In late 2013, Ford unveiled the latest Mustang. It was to be a global car for the first time in its history. The Mustang that you would buy here in the Twin Cities was to be designed to be one you could buy in London, Moscow, Cape Town, Sydney, Mumbai, Beijing, Buenos Aires, and so forth. Yet, it had to maintain a certain air about itself without detracting from the car’s own principles. That was a monumental task for Ford, but completely achievable.

As much as the Mustang is part of the automotive lexicon of this country, it had an impression upon my own life. My first Mustang was a 1974 Ghia hardtop coupe (known as the Mustang II) in a lime green color with an avocado vinyl roof. It began as my brother’s car until it became mine for a couple of years in the mid-1980s. It was OK, just OK. The last Mustang I drove belongs to a former friend of mine in northern California. It was a 1968 hardtop with a 289-cubic-inch V8. That was one of the best cars I have ever driven in my life. The last time I saw it was in 1990. It would be the last Mustang I would ever drive. 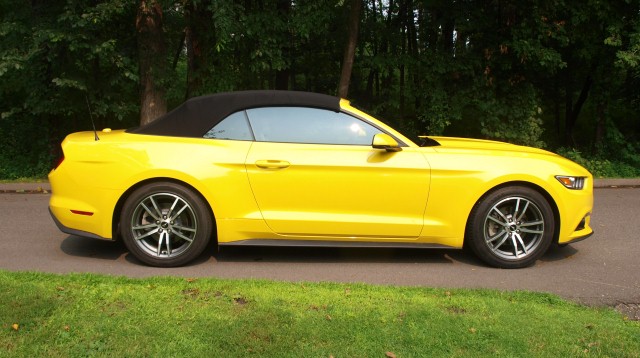 Until now. I had the privilege of getting reacquainted with the Pony for the first time in 25 years. This 2015 convertible with the new EcoBoost engine came just in time for summer. It had a sunny disposition about its bad self; it came in triple yellow tricoat with a black roof and ebony interior. That shade of yellow would brighten anyone’s day.

Considering that today’s automotive consumers are settling into crossovers and are looking upmarket for driving satisfaction, is the Ford Mustang still the symbol of American automotive desire?

This newest Mustang offers a combination of classic design elements with modern twists. Looking at the pony badge up front in a grille, it immediately sends a reminder of what this car is all about. Every line, crease, bulge and angle is folded into a shape that continues to pay homage to the Mustangs of the past, even with some very modern details. The rear end, for example, offers the three upright lenses that have been a part of this car since 1964.

The silhouette for both the coupe and convertible are handsomely modern. The soft top on this tester folds down rather quick, after a release of the handle on the inside and a push on the button. Two plastic tonneau caps tuck in to lock down the roof and create more airflow through the car. With the roof down, the Mustang offers a classic look that cannot be ignored. 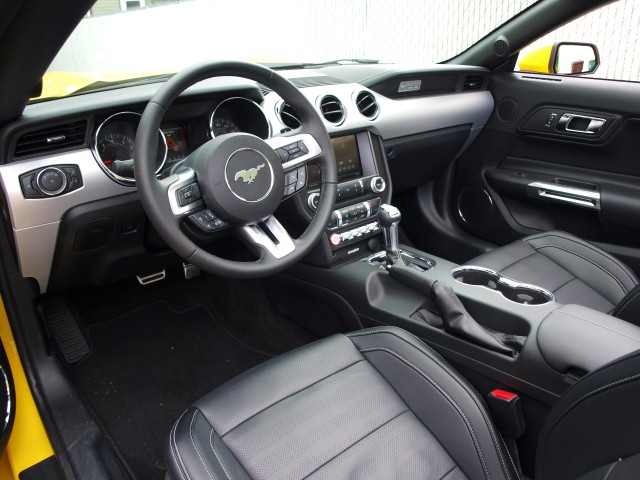 The interior carries the same theme as exterior: the fusion of classic and modern elements. One could find some parts of the dashboard dating back to 1967; it is very functional and quite handsome to look at. The instrument cluster has two huge dials that are readable, along with backlighting that can be changed to a selection of colors you choose. If you want purple instrumentation at night, that can be changed on the center TFT multifunction screen in-between the gauges. That screen has many options for readouts, including car performance stats, fuel and trip information, and settings for almost every vehicle function.

The MyFord Touch screen dominates the center stack, but it is located below eye level for tall drivers. It is easily accessible, though, as with the climate control functions. Below the climate control switches are four chromed toggle buttons. They are indeed a throwback utilizing very modern functions, such as hazard lights and the drive mode selector. The thick-rimmed steering wheel has a plethora of buttons that are logical to control the MyFord Touch/SYNC, cruise control, and information screen functions. In all, the switchgear is of good quality, as expected from a Ford product.

The EcoBoost Premium model offers two very supportive and comfortable leather seats. Power seat adjustments help to find a great driving position, while making one very comfortable behind the wheel. Rear seat room is obtainable, if everyone is of average size. Trunk space is sizable, though measuring out to 11.4 cubic feet. That should be enough room for luggage for two on a weekend road trip.

For audio entertainment, a Shaker sound system was installed in this convertible. This setup includes 12 speakers, one being a subwoofer in the trunk, an amplifier, and the ability to use SYNC to playback music files and streaming radio from your mobile apps via a Bluetooth or USB connection. SiriusXM and HD Radio are also part of the MyFord Touch/SYNC package. 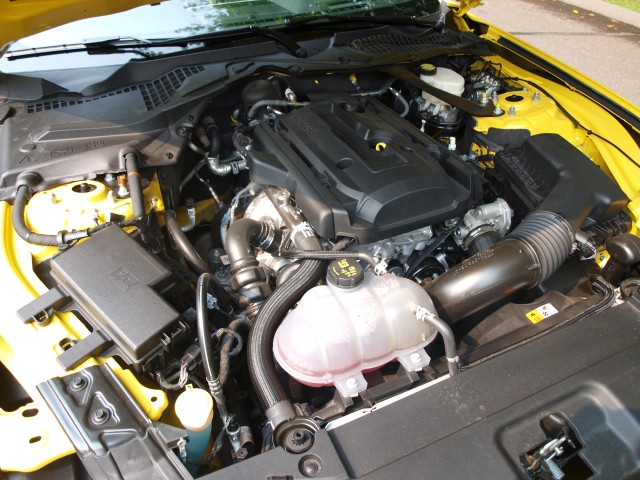 Underneath the hood is something quite special. It is a 310-horsepower 2.3-liter EcoBoost turbocharged four-cylinder engine and it is sensational! The throttle response is good and there is no turbo lag at all. This convertible had the six-speed automatic transmission, which is also quick on the shifts. Those shifts are even quicker when you put the drive mode into Sport+ or Track. In Sport+, the revs run freer, but you get the full capability of the drivetrain to make quick work of the curvy roads and lonely country two-lane highways.

In this new Mustang, there was one development that has made many fans (and non-fans) celebrate with extreme joy: the introduction of independent rear suspension. It was a long time coming after five decades of solid live axles in the rear. Finally, this is a Mustang worth celebrating. You celebrate it by taking a corner and letting the rear end swallow it up, instead of resisting it. Therefore, the Mustang tracks very nicely anywhere you point it. However, if you are not used to upright long hoods in front of you, a little reacquainting with judging things in front of you will have to do to truly get a grip on this wonderful car.

The ride is compliant in Normal drive mode. Sport+ firms up the suspension, though it balances ride quality with tauter cornering. Put the Mustang in Track mode and the Traction Control is shut off. Steering feel is weighted in Sport+, but turning action is sharper. In Normal, turning effort and on-center feel is pretty good. Braking is also very good with solid stops in both normal and panic situations.

Ford has been talking about increased fuel economy with the EcoBoost engine lineup overall, in comparison to naturally aspirated basic engines. In this EcoBoosted Mustang convertible, I achieved an average of 24.3 MPG. Not bad for a 3,701-pound drop-top car! 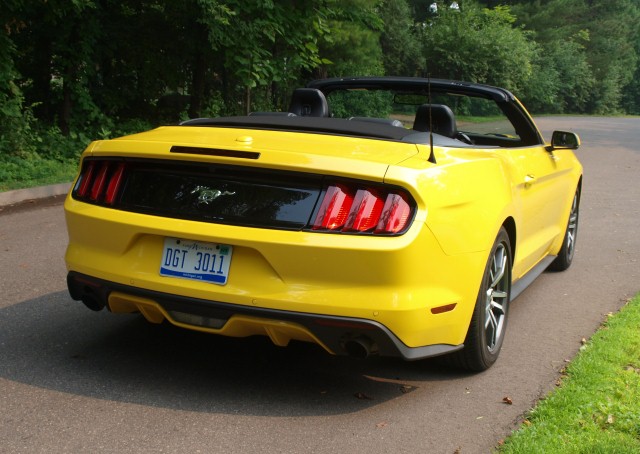 The Mustang lineup starts at $23,800 for a V6-powered fastback with a manual transmission. Convertibles start at $29,300 with the same driveline. This EcoBoost Premium convertible tester came with a sticker price of $41,790. If you must have the power of a V8 in your pony, the Mustang GT is it. These powerful horses start at $32,300 for the fastback. To get a GT Premium convertible with the same equipment as this EcoBoost, the sticker will jump up to $48,865.

The Ford Mustang is part of the iconography that has been a part of the American scene for the past 51 years. It has gone through its highs and lows during its lifespan, and continues to be a constant in the Ford lineup since 1964. Today’s pony is one sweet ride, designed for the world with a nod to the American audience. The feeling of driving an American icon that is well behaved and packing balanced performance is something one should experience in their lifetime.

A quarter century has gone by in-between Mustangs. When I say “it was worth the wait” you’d better believe that this 2015 EcoBoost convertible left a huge impression upon my soul. This is perhaps the best driving Mustang ever engineered. It certainly was one of the most enjoyable cars I had the privilege of reviewing for this magazine.