I will now stand corrected.

In our year-end issue (issue 510), I mentioned a question posed by a friend on Facebook asking whether I found the car I wanted to buy. This was the same car that was featured on my Holiday Gift Guide (Issue 509). Both pointed to the 2015 Dodge Challenger, a superb car and my kind of fun. You can peg that as being a Bear or as someone sort of masculine, but, the Challenger is pure heritage, right down to the exhaust note.

Let’s be real for a moment. A two-door coupe is not entirely practical. It will not seat four of us going to dinner to one of our favorite haunts. Nor will it get us to a Pride celebration outside the Twin Cities comfortably. Though a Challenger might be attractive to some potential date, it would scare the living daylights out of everyone else.

For the record, I am talking about the 2015 Dodge Charger.

The Dodge Brothers’ big four-door sedan underwent a mid-cycle refresh that was pretty extensive to fine tune the brand’s aim toward the performance buyer. It is still on Fiat Chrysler Automobiles’ rear-drive platform now offering four engines and plenty of trims to choose from, including the headline-grabbing, 707-horsepower supercharged SRT Hellcat.

I could tell you what I think about this HEMI-powered Charger R/T Plus in a short sentence, but I have a review to parse out here. Be patient and follow along. We’ll get to the good part…

First, we should look at that that new nose. It’s pretty angry. The 2015 Charger’s angry look had mixed reviews from the media and enthusiasts alike. Does it look like the smaller Dodge Dart? Somewhat, but one needs to see this in the flesh to notice the textural differences and optical illusions, including the lower spoiler area and the shape of the front end. Its headlights raised a lot more concern, but one would understand its look by noticing its purpose. The surround LED lamps frame a single beam and turn signal lamp, giving it a personality of its own. We would argue that this Charger was designed to bring us back to the original, with its wide grille and headlight arrangement. It truly befits its angry look.

The rear end’s changes gave the wide taillights more of a three-dimensional feel. This was also influenced by the Dart. However, it gives the Charger a personality out back that only those behind it can appreciate as it pulls away into the horizon.

In-between is the same second generation Charger shell we know and like. The rear window is indented from the frame, something that was first seen in the 1968 Charger. The rear door is framed in a fastback-like fashion, with a design paean back to 1966. In all, we have gone from angry to overtly aggressive. Our R/T Plus model came with twenty-inch chrome alloy wheels that finish off the black paint by adding a bit of sophistication to its designed aggression. 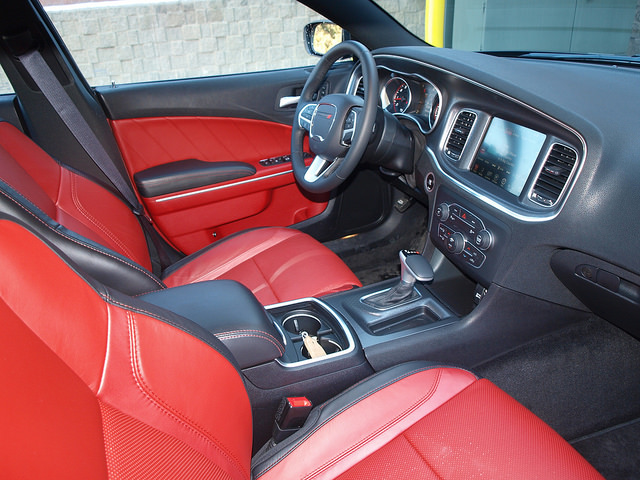 The tweaks are a bit more subtle inside. The first thing you will notice is the TFT screen in-between the tachometer and speedometer. As with modern Fiat Chrysler Automobiles (FCA) products, the screen is switchable for many readouts and information from tire pressure to trip information to fuel economy. As with the Challenger, there is a retro look to some of the readouts, emulating an old speedometer for fuel economy readings. Most of the dashboard is carried over from the 2014 model, with more emphasis on the available 8.4-inch UConnect Touch screen.

The steering wheel is new, employing switches seen in more modern FCA models. The big buttons help tremendously for controls from cruise control to switching the TFT information screen. The gear lever for the automatic is a T-bar that looks like the “toggle” seen in the Challenger; however, it operates like a real console shifter. This is a welcomed optical illusion that really works.

Front seat occupants enjoy big chairs with good bolstering in the R/T Plus. We love the black/red leather combination that is soft to the touch. There is plenty of comfort and support behind the wheel. Rear seat room is fine, but center passengers will have to contend with a transmission tunnel and a raised cushion. Outboard rear seat passengers will be comfortable with adequate leg room and surprisingly good headroom for six-footers.

If someone says that you need a HEMI to power your Charger, they are right. This R/T Plus has the smooth HEMI 5.7-liter V8 with 370 horsepower. It is a wonderful engine with a quiet grunt, but a lot of force when the accelerator pedal is depressed. It is also efficient, with cylinder deactivation cutting half the pistons when they are not needed. 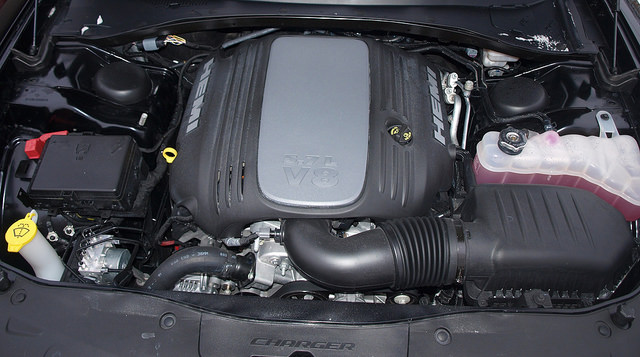 Connected between the HEMI V8 and the rear wheels is the TorqueFlite eight-speed automatic transmission designed by ZF. This time, the transmission was smooth with unobtrusive shifts. With the HEMI 5.7-Liter V8, the transmission just simply felt perfectly matched to the engine’s capacity.

Driving the Charger is one of the most relaxing experiences this side of a luxury car. It has a smooth ride that does not allow for anything to ruin it, uneven roads included. Though it is a performance sedan, it also shows off a bit of luxury car in the mix. Cornering offers a near flat experience. No roll or lean, even if you push it. That is why you tend to relax behind the wheel of a Charger, even the HEMI in front of you just in case you need to escape. You know you have the confidence to do anything with it.

However, steering is on the light side. You have good response from the wheel, though it does feel a bit detached at times. You could firm up the feel by selecting Sport mode on the console. Sport also ratchets up transmission response, as well. Brakes are extremely powerful. Stops are strong and sure in both normal and panic situations.

The Charger arrived when the air was below freezing and the street where I live was icy. With only rear wheel drive and all-season Firestone Firehawk GT V tires, it gave the traction control a reason to work hard on keeping the Charger on the ice and snow. It actually worked extremely well, giving the car a good fight.

The HEMI 5.7-liter V8 is not made for optimal fuel economy, even with the TorqueFlite eight-speed automatic. Our average was 18.6MPG in my care, even with some highway work. My high figure was 20.8MPG.

But, do you really need 707 horsepower? Maybe want, but the HEMI 5.7-liter does the job very well in this R/T Plus. In fact, it would be the configuration I would order if it were my money. Sure, it would be cool to get the SRT 392 with the 6.4-liter monster or the ferocious SRT Hellcat. For me, I like what the HEMI does for me. It’s smooth, but it’s got a bite when you encourage it to pounce on unsuspecting traffic.

In all, the Charger represents a mix of its heritage and its future. The 2015 model simply advances this idea to another level. If you want to own the road, a Charger is the best way to do so.

So, yes, I stand corrected. This would be the car I would buy for my own personal transport.