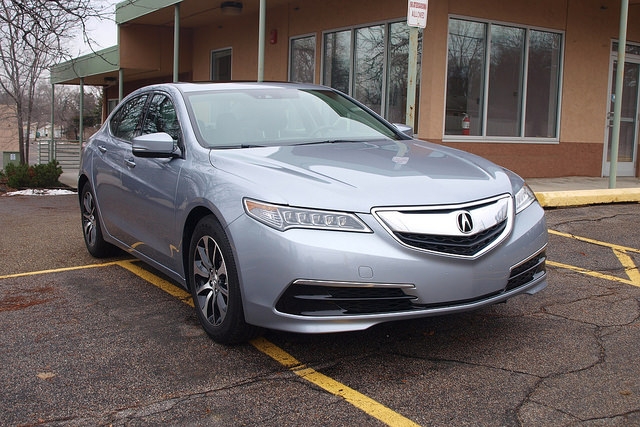 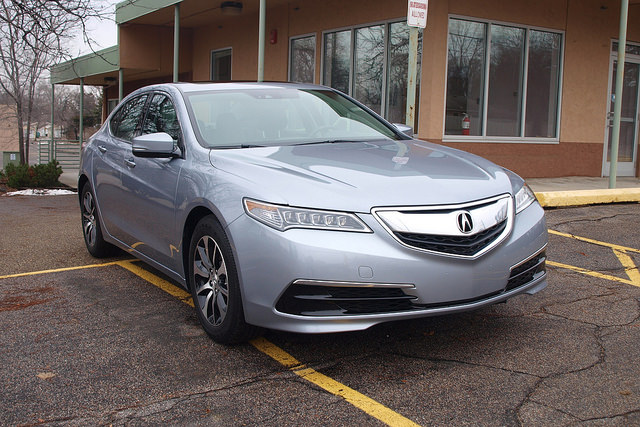 Have you ever drove a vehicle that asked more questions than answered any of them?

This was the quandary that set the tone of the arrival of the 2015 Acura TLX. The new premium mid-sized sedan debuted at last year’s North American International Auto Show in Detroit as the replacement for two cars – the TSX and TL. The pundits questioned this move, as each model had a specific audience it catered to. They also question the loss of a wagon, an enthusiast’s dream in the guise of the smaller TSX.

However, things became clearer when the car arrived into the hands of the media. We got it. The TLX fits in a highly competitive segment against some serious vehicles, though some may point out its size in comparison to the BMW 3-Series, Audi A4, Lexus IS and Mercedes-Benz C-Class. Yet, in its own way, it promises to satisfy premium buyers with its own level of luxury, combined with the latest technology, engineering and a sporty feel.

That is a lot of promises to heap upon an Acura. Having driven two of them, I had to know whether these promises live up to the final product.

On a certain level, yes. Though there are some things that denote it being more distinctive in an Acura way. Another way of looking at the TLX is that it drives to a beat of a different drummer.

For example, a lot of the brand’s signature look has been melded onto 190 inches of sedan. The rear quarter window kink reminds one of the ILX, while the Jewel-Eye headlamps have been adopted from the RLX and MDX. Some details could be traced to the entire line in one way or another.

If one avoids deconstructing it, the TLX is a handsome car. The shield grille distinguishes the TLX from its competitors. It is pretty well-sized for the class, more of a touring sedan than one for families. The four-cylinder model sampled here has seventeen-inch wheels that compliment the lovely Slate Silver paint – a mix of a really light shade of blue with silver. 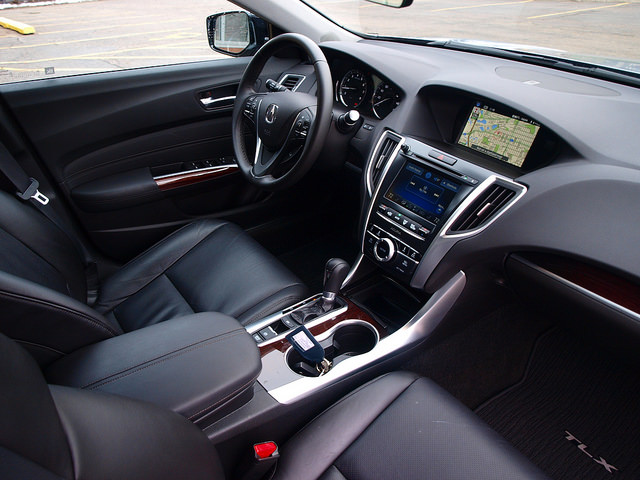 Interior-wise, it is pretty much the same philosophy. Some parts are seen from other Acuras, despite some distinctions based on scale. Dual screens take up the center of the dashboard – the lower being a touch screen. Instrumentation are standard issue for Acura, including a TFT screen for trip, fuel economy and vehicle information. Switch gear, including the functions for the center screens and steering wheel switches, are familiar and right to the touch.

Seating is OK. Front seats seem great for average bodies with a good mix of bolstering and cushion. Ebony leather seating feels solid to the touch. Taller drivers may want to get comfortable to clear the moonroof surround, but you can find a place behind the wheel for competent driving. Rear seat room is average, though taller passengers may have a bit of an issue with the smallish doors in the back. In truth, the TLX is better suited as a touring sedan with occasional rear seat use.

AcuraLink is integrated in the TLX. This is the driver for a series of connected features, including streaming from Aha and connection to telematics services. You could also send destinations to the navigation system, although the mapping system might be a bit outdated, especially when trying to find a subdivision that has existed for a few years. Infotainment is fed through the ten-speaker ELS Studio Premium Audio System with surround sound emitting excellent tones and textures.

There are two engine/transmission combinations for the TLX. A 2.4liter four-cylinder with 206 horsepower is connected to a new eight-speed dual clutch transmission and only available in front wheel drive. You could upgrade to the 3.5liter V6 engine, offering 290 horsepower. The V6 is connected to a new nine-speed automatic using a push-button selector on the console. Super Handling all-wheel drive (SH-AWD) is available only with the V6.

Our tester had the four-cylinder engine and the dual clutch transmission. Many reviews on the TLX point to this driveline as the best choice for this car. We agree. The four-cylinder is flexible and does a good job keeping pace. We had a chance to drive the four-cylinder TLX in Los Angeles, as well as the Twin Cities, and found it just fine in both places. Not only did it run well with the faster traffic of Southern California; it made easy work right here in our own backyard from Uptown to the exurbs. The dual clutch transmission is quick on the shifts. We found no lag in gear changes when using the paddle shifters in Sport + mode. 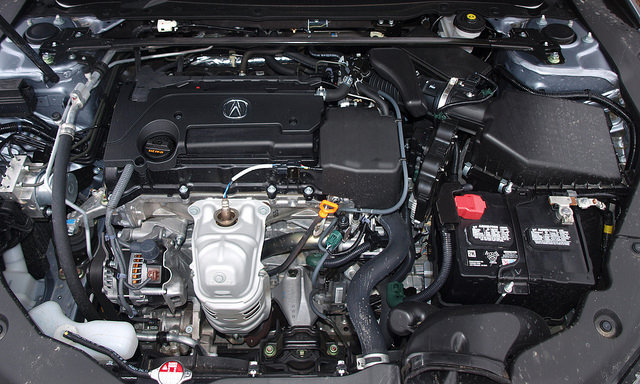 By replacing two cars, the TLX sought to combine the best of its predecessors into its driving dynamics package. On the four-cylinder model, we found the TLX to be a bit soft for those trading up from the TSX – also known as the “European Honda Accord” outside of North America. However, former TL owners will find the TLX a bit familiar in ride quality. Being soft is not a bad thing, as bumps and other road imperfections were absorbed without shocks through the cabin. Handling is rather controlled with nominal roll and lean through the corners.

Standard on the four-cylinder model is the amazing P-AWS (Precision All-Wheel Steer). This system allows the rear wheels to assist in turning. The result is a sharp turning radius that makes tight maneuvers easy to manage. It also helps in making easy work through the corners. Though steering feel is on the light side, the action is quick with P-AWS responding accordingly in the back. Brakes are very good with solid pedal feel and good stopping power in both normal and panic situations.

One issue that popped up in our time with the TLX was when the car was presented with winter conditions. Traction on a straight line was fine, but on some turning maneuvers present a loss of grip. The culprits of the traction loss on the front-drive, four-cylinder model were pointed to the P-AWS providing perhaps too much assistance on turns and the Goodyear Eagle LS2 tires shod on this car. The solution to these problems would be to get a second set of tires for the winter – at least to get the grip issue corrected.

The expectation of good fuel economy is placed upon the four-cylinder TLX due to its new gearbox. This car turned 27.4MPG – right near where Acura stated this model would average.

If you want a TLX, pricing starts at $30,995. Our tester had the additional Technology Package, which brings the sticker price to $35,920. The top price you would pay for a TLX – one with a V6, SH-AWD and the Advance Package – would be $45,620. This is a wide price range that certainly covers the two cars it replaces. 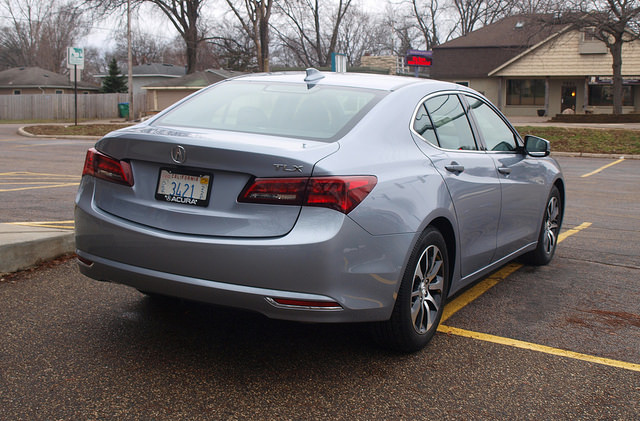 The Acura TLX is a nice car. It is exactly that – a nice car. In combining two models, Acura blended them together for a middle-of-the-road premium sedan. For most conditions, the four-cylinder model not only presents the best driving option, but also a decent value in its class.

As much as we want a good premium sedan that works well with our lifestyle, we might have too many to chose from. Perhaps it takes some narrowing down in terms of budget, performance and fulfilling needs. Perhaps we want one that fulfills their promises and answers all of the questions we had for it. If the Acura TLX is on your final list, take a very good look at it.

Hopefully your questions have been answered.