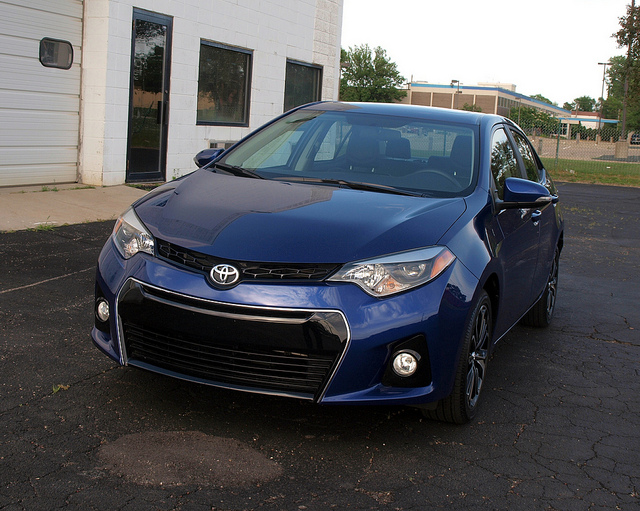 “So far, it reads like a best seller – a well executed one.”

A good summation for perhaps one of the most improved cars in the marketplace – the Toyota Corolla. These good tidings came on a preview drive in the Twin Cities where the regional media corps (including Lavender) got to sample the eleventh generation model last October. After driving the previous generation model earlier that May, I came away surprised on how far the Corolla has come after skipping several generations of it due to various reasons.

Since then, a lot has happened. The Corolla is in a neck-and-neck sales battle with the Honda Civic. While monthly sales in May of this year went to the Toyota, the 2014 calendar-year-to-date advantage is still in the Honda’s court. Secondly, the press warmed up to the new Corolla. What they found was exactly what was discovered in the preview drives. Yet, the majority of the media corps was not convinced that the Corolla was a giant leap in progress for Toyota’s global best-seller. Perhaps we want the Corolla to have a killer engine to go along with the updated styling.

Some would admit that the Corolla would be better served if it went toe-to-toe with the Civic and Mazda3 – to be some sort of enthusiast compact that still appealed to consumers on a budget.

The point is being missed here. The eleventh-generation Corolla is a leap forward in many respects. You just need to drive the sportier S model to see how far the Corolla has improved.

Why the S model? According to Toyota, they projected that 40% of all Corolla sales in the USA will be that model – mostly by retail consumers. It is an ambitious figure, but please consider these facts. The S has a distinctive look with its aggressive front end and other details. It has a sportier interior that fits with the new instrument panel, Entune infotainment suite and enlarged cabin. More importantly, the price is right.

At the media drive, there was one model I did not get a chance to drive. Yet, it was the one everyone wanted to drive. Take a guess at which Corolla model that was?

It was my turn to take the Corolla S through its paces.

Sure, it has taken quite a while for this to happen, but it is truly the best Corolla on sale. Normally, the bulk of deliveries are usually the LE model – mainly to fleets and commercial consumers. The idea is ensure that there is an enticing Corolla for retail customers to buy. If the price is not right, or if the consumer feels they do not need the sport/luxury of an S, could go to an LE or LE Eco at the same dealership.

I will argue that the S is the Corolla to get. One look will tell you the reasons for this choice. There is nothing plain about its front end clip, small lip rear spoiler and aggressive seventeen-inch alloy wheels. There is nothing that speaks “rental car” on the S here – in fact, I think it wants to go out and play somewhere. 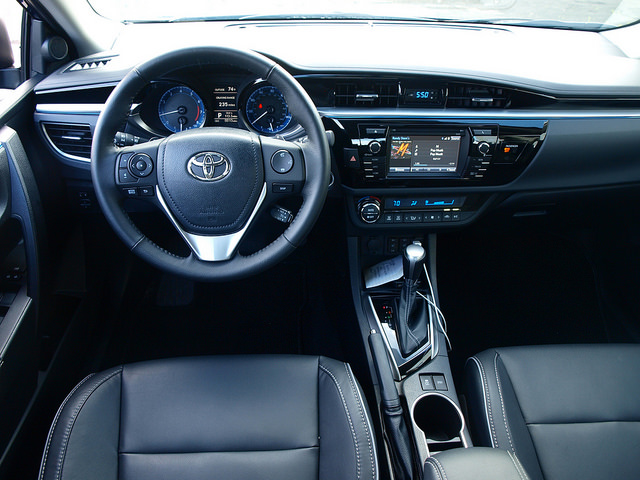 By choosing the Premium level for the S model, you get a good mix of sport and luxury inside. Start with the SofTex seating with its soft leathery feel and right bolstering up front. As discovered from last October, this was indeed the roomiest Corolla in 26 years. It still is…and the most comfortable behind the wheel ever.

If you have to sit in the backseat, be prepared for an even greater surprise. It is the roomiest in Corolla history. This fact still remains from the earlier media drive. For a tall, wide person like myself, there is head, leg and hip room that some midsized sedans have. Again, the rear seat is comfortable.

More examination of the Corolla S also shows some “lightening up” of its personality, while improving cabin quality and upping content. The steering wheel is thicker with larger buttons for audio, phone and information functions. Dashboard design is now aligned with newer Toyota models using better materials, buttons, updated instrumentation and screens. A black-and-blue-themed instrument cluster ties into the blue accents in the interior – a match for the blue paint on the outside. The center screen in-between the two large dials are an upgrade from lower models using an LCQ display. There are more trip and fuel economy readouts to review in the S, which is helpful for those of us who need to be informed on the road.

The big news for the new Corolla’s cabin is Entune. For 2014, Toyota decided to rename all of its infotainment systems with the name. It also represents a new set-up where you could add application connectivity from your smart phone – namely iHeartRadio and Pandora. Select the Drivers Convenience Package, and you get satellite navigation, SiriusXM, HD Radio with weather and traffic reporting. No matter the source, everything is pumped through six speakers positioned around the cabin. 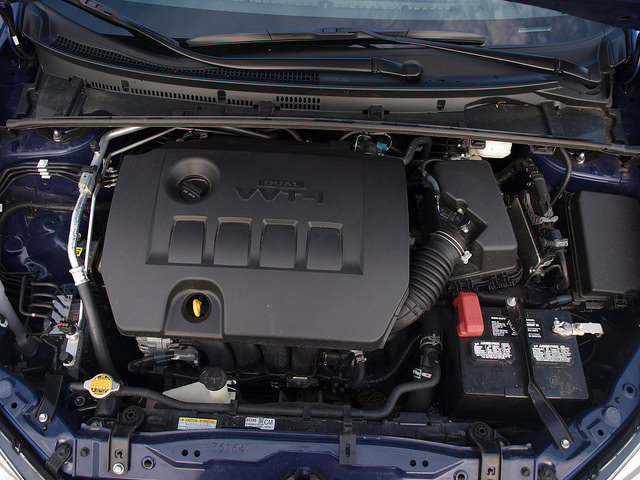 The S gets the 132 horsepower 1.8liter four-cylinder. I would argue that it would be better served with the new 140 horsepower Valvematic version of the 1.8liter engine. The extra eight horsepower, assisted by freer intake valve flow, would give the S some more footwork while achieving higher fuel efficiency. If you want that engine, it is exclusively available on the Corolla LE Eco.

Toyota decided to equip the Corolla with a new continuously variable transmission – the CVTi-S. This S Premium has this connected to the 1.8liter engine, sending power to the front wheels. It is a better driving experience than before, since the CVT has a better sense on where to plant the Corolla’s revs according to the throttle’s needs. The CVT does fall when presented with an immediate acceleration situation, such as getting on a freeway. That first ratio does take a while to kick down through to cruising speed. Otherwise, the Corolla’s driveline is comfortable at any speed and will get you there with ease.

Back in October, I raved about the improvement in driving dynamics on the LE and LE Eco. You would figure that the S model would represent a sportier driving feel than its lower priced brethren. Well, the suspension set-up is the same as in other Corolla models, but that is actually a good thing. The Corolla showed nominal lean and roll in the corners and a balanced ride on most surfaces. There is a bit of road noise sifting through the cabin, especially over coarser tarmac.

For a Corolla, the steering wheel is huge with a thick rim for the S model. The rim alone allows for good grip for the driver to manage a good turning radius and response from the wheel. While overall steering feel starts off soft at the beginning, selecting the Sport mode from the transmission tightens up both wheel feel and response. Sport mode also tightens up the “shift points” using either the paddle shifters or the gear lever through 7 ratios on the CVTi-S transmission. Brakes stopped decently, but solidly in both normal and panic situations.

The one thing I was not able to accurately record from the October preview drive was fuel economy. For reference, the 2013 Corolla S turned a 30.4MPG fuel consumption average last May. This time around, the new Corolla S achieved an average of 32.5MPG. 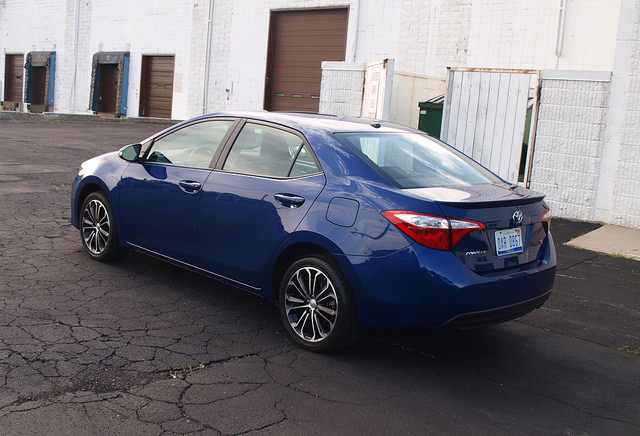 Perhaps the most important part of the equation is the price. This S Premium tester was loaded up with the Entune audio and navigation set-up – part of the Driver’s Convenience Package – and a moonroof. The sticker came to $23,570 – the most anyone would pay for a Corolla. With plenty of its competitors scaling the $25,000 threshold, it is refreshing to find a bargain in a fully loaded compact sedan.

The obvious summation is this: This is the best Corolla yet. I would rather not leave you there. Toyota knew that to be competitive in a segment that has grown and matured, it had to step up its game. A redesign of the body, increase in interior space and a few engineering and technology tweaks is what we see from this car. However, there is a lot more than that.

To compete in this segment, you have to hit the high marks – design, quality, space, comfort, ergonomics, performance, driving dynamics, efficiency and price. The improvements Toyota made on the eleventh generation Corolla touched all of these bases – including being the best overall value for the money in its class.

On top of all of this, this new Corolla is serious about being the sales leader in its class. It could be possibly be exactly that.