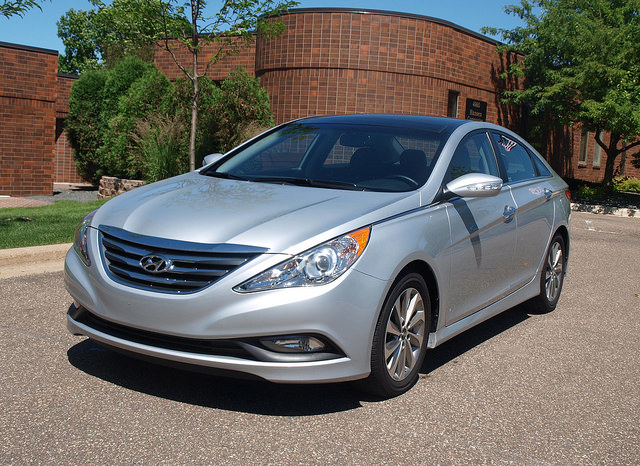 Get One While You Can.

Since its debut in 2010, the latest Sonata has served Hyundai well. From its ground-breaking design inside and out and efficient engines and chassis, this mid-sized sedan helped the Korean company gain serious ground in this country – in terms of both sales and reputation.

Before a brand new model arrives in showrooms, I wanted to drive the Hyundai Sonata one last time. I wanted to see if it is still a good buy after all these years.

From outside appearances, it is dramatic. The Sonata is handsome in its ground-breaking “fluidic sculpture” design with coupe-like tail and astounding front end. The doors open wide for a driver looking for adventure. A recent makeover tweaked the grille texture, lower front clip and tail lights. Our Limited sedan came with 17-inch alloy wheels and Kumho tires.

This design has been with us for a few years now, but it is as contemporary as ever. You do see a lot of these “fluidic sculpture” Sonatas on the road, which is comforting when choosing your next mid-sized sedan. The body is low slung and fastback-like – very distinguishable on the road. 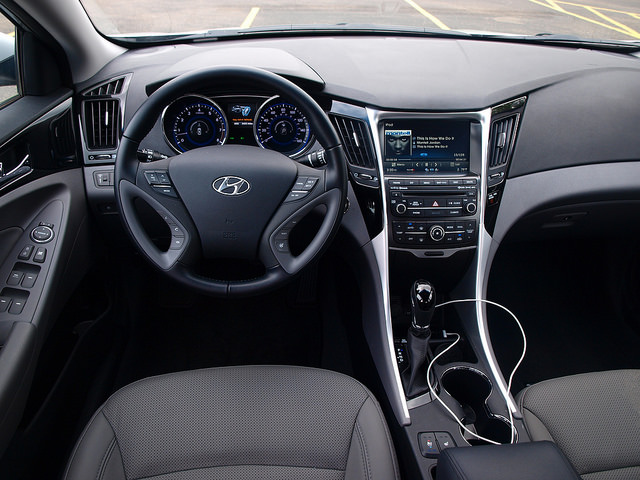 The cabin is huge. You sit on big seats offering some bolstering and power adjustments – including lumbar support. In the rear, you get plenty of leg room and excellent access due to a wide opening door. However, the coupe-like roofline would be a challenge to taller passengers.

A thoroughly thought out instrument panel remains with all the switchgear you need within a finger’s reach. The main dials are huge with smaller digital dials for fuel, water temperature and gear selection. In the middle is a video screen that displays the vehicle’s trip and economy data.

In the Limited, a TFT touch screen commands the center stack displaying the navigation system, audio readouts and various vehicle functions. Controls are cleaner and more logical than in previous editions of the Sonata. Gone are the Volvo-esque climate switches that blew everyone’s mind four years ago. While the shifter commands a small part of the center console, there are plenty of places to put your valuables right behind and next to it. 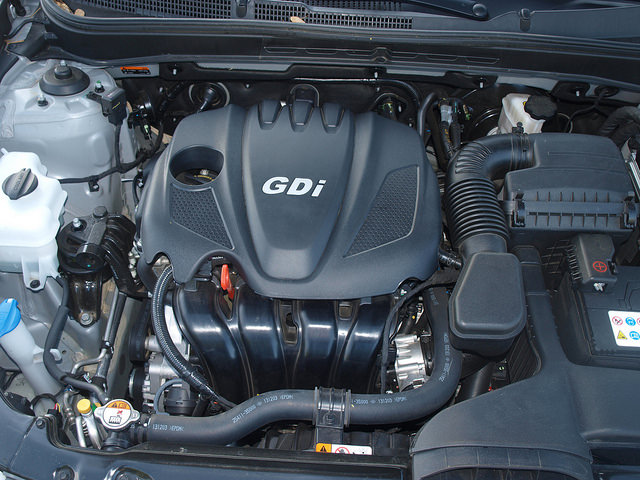 Hyundai’s 2.4liter four-cylinder resides under the hood putting out 190 horsepower and 179 pound-feet of torque – down from 198 horsepower that was touted during its introduction. A six-speed automatic connects this engine to its front wheels for power. Put your foot down and it subtly trumpets its entry into the world. The pickup is quite good. It goes through the gears without any resistance, as it wants to own the highway.

The ride in this Sonata felt confident over all surfaces. It handles decently with near flat cornering, though suspension feel is on the soft side. Ride quality is smooth with little give to potholes and expansion joints. Perhaps this is due to its low ground clearance ensuring minimal suspension travel in the Sonata.

Braking is sharp and on point. Pedal feel and stopping power is good in both normal and panic braking. There is the issue with the Driver Selectable Steering Mode system. In “Normal” mode, steering feel is soft and vague with a lack of wheel action and exact turns. Put it into “Sport” mode, the wheel feel is weighted. It actually improves wheel feel, though turning response and radius does not change.

When it came to fuel efficiency, Hyundai originally promised unheard of economy figures normally reserved for Hybrids and compacts alike. In reality, this Sonata turned an average fuel consumption figure of 27.8MPG. 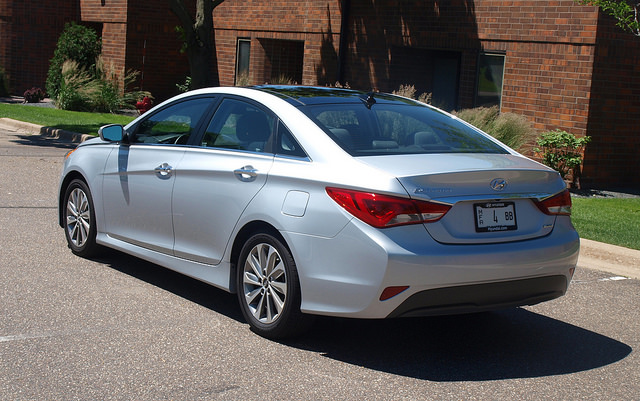 This is the swan song for a very popular mid-sized sedan. Most of the approximately 828,000 Sonatas sold during this outgoing model’s run are still on the road. Even if you are looking for one of the last new 2014s or a pre-owned model, you cannot go wrong with its groundbreaking design, space efficiency and economy.

By the time you are reading this, an all-new 2015 Sonata will be available at your local dealer. A preview of this new model is forthcoming. Meanwhile, if you like this outgoing model – grab one while they last.