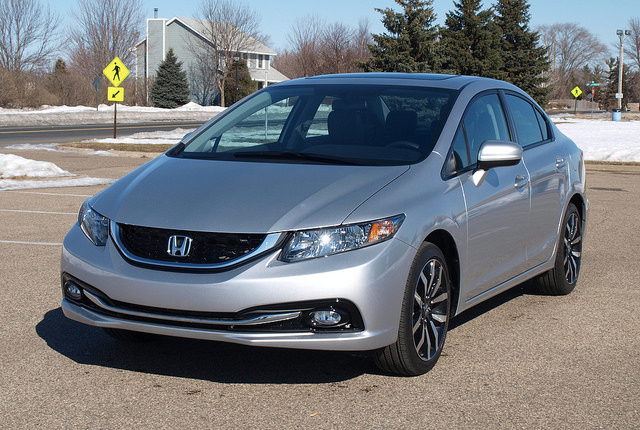 Do you remember seeing your first Honda Civic?

It is not a question most often asked, but we often forget how long the Civic has been around – albeit many generations old. In my case, I do recall the first Civics ever sold. They came in a two-door sedan with a small clamshell trunk or the more popular hatchback. The one thing that drew people to the Civic was an innovative engine that emphasized efficiency and emission controls within the engine – the CVCC.

You also knew people who had one – especially in California. My cousin Claudia had a yellow first generation hatch, my brother owned a second-hand third generation DX hatchback, an ex-friend in the Bay Area bought his third generation DX hatch new – almost the same color and configuration I considered before buying the Acura Integra RS. This lineage of Civics and people associated with them could go on for generations, years and so forth.

All of these memories flooded back upon receipt of a 2014 Civic EX-L sedan. Though it has come a long way, one familiar with the entire line could not help how far Honda’s compact has come along. Though I wonder if we may have forgotten how pure the earlier Civics were.

No one in 1977 would have seen how much this Civic have grown – let alone selling a four-door sedan version in this market. Nor would we have imagined a Civic adorned with seventeen-inch alloys, low profile Michelins, leather seating, a digital dashboard, a touch screen infotainment system and a choice of engine, propulsion and fueling options. 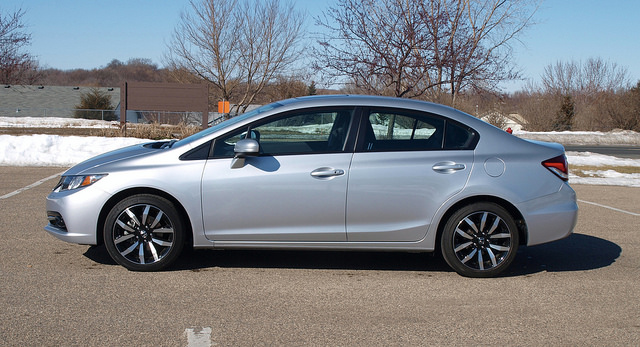 Today’s Civic is a product of our reality – a package of convenience, luxury and efficiency. But, is it still a Civic to the core dating back 40 years or so?

The current sedan easily dwarfs the original Civic by 30 or so inches. It is by no means big, which is perhaps a good thing. What the Civic has become is a sleek, low-slung compact sedan that exudes its sporty credentials than its practical one. With the quick refresh from 2013, you might say that the Civic has returned to its roots – about the third generation, to be exact.

In this latest Civic sedan, there are some paeans to the past in its modern style. The grille texture reminds one of a 1977 CVCC hatchback. The roofline continues the evolution of the sedan – something dating back to the Fourth or Fifth generation. Out back is the best rear end in Civic history – larger taillights with a nice chrome finish.

There is one thing that is uniquely this generation of Civic. The EX-L tester came with aggressive seventeen-inch alloy wheels with Michelin low profile tires. These would probably be seen more as a modification on older Civics rather than part of the current EX-L package – a piece of reality of today’s compact cars. 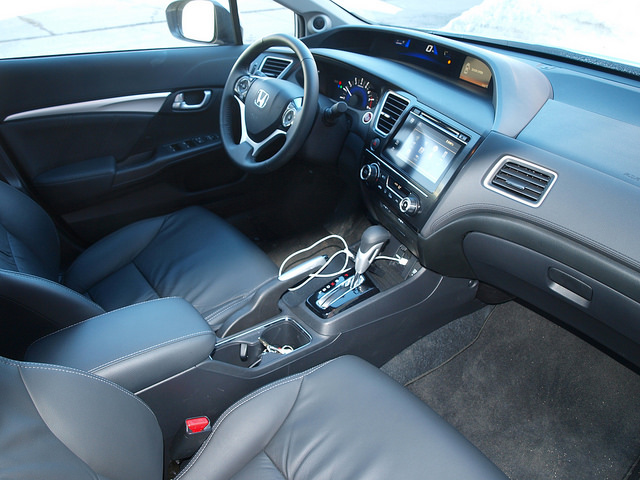 For two generations now, the Civic’s interior has been marked with a two-tier instrument panel. On top are a digital speedometer, fuel gauge, fuel economy meter and a version of Honda’s upper TFT screen for further readouts. The tachometer and warning lights are in a binnacle right above the steering column. While most drivers would prefer a more conventional set up, the Civic’s dash actually works. The upper digital portion trains the driver to look ahead to the road.

The lower tier continues onto the center stack and a touch screen for audio and vehicle functions, along with the rearview camera screen. Redundant switches are found on the steering wheel with multi-function stalks – all good to the touch and work extremely well. Climate switches are also good to the touch with logical functions and readouts.

Soft leather is slathered on the Civic EX-L’s seats. Though good to the touch, the intended bolstering does not fully come through. They are comfortable for the most part, yet soothing for long drives. Headroom may be an issue for tall drivers, but you can adjust the Civic’s driver’s seat to more of a sports car set up. The drawback would be if anyone the same size had to sit behind you. There is enough room for average adults in the back and a family of four with younger children would find the Civic is a good place for a ride.

The EX-L package includes HondaLink, which enables certain apps to work with the infotainment system. If you have Pandora or Aha, you can connect from your smart phone to let the music in. What the standard EX-L package does not include is SiriusXM satellite radio and a navigation system. That would include an additional upgrade to the Navigation Package.

Power from the 1.8liter single-overhead camshaft four-cylinder is pretty good to pull 2900 pounds of Civic four-door around. With 143 horsepower and 129 pounds-feet of torque on tap, this engine held its own as it meandered through urban and rural cycles. In fact, one might even say that this Civic is quite lively and fun when it is a good mood.

Connecting this engine with the Civic’s front wheels is a continuously variable transmission. While efficient and smooth, it did hamper the Civic’s performance. When needing a quick getaway, the CVT held onto its lowest gear for too long before kicking down. It also did not allow the 1.8liter engine to relax below 1900RPM at highway speeds.

If you pitch the Civic onto a piece of smooth tarmac, it will reward you. The ride is smooth and solid, though yielding a bit of lean and roll in the corners. It will do its best to absorb road imperfections, but the Civic will bounce on lumpier roads. Not to mention the selection of tires – Michelin Pilots, to be exact – yielded an unwelcomed soundtrack with plenty of tire noise coming through into the cabin.

A small steering wheel made quick work on an already sharp turning action. If you avoid obstacles, potholes and other drivers, the reaction is quick and the recovery quicker from that maneuver. On-center feel had a bit of play and there is some lightness in overall steering feel. Brakes are just as sharp with good modulation from both normal and panic stops.

Civics has always been known for good fuel economy. This EX-L tester yielded a 30.1MPG average in temperatures averaging around the freezing mark. Honda states that the CVT model would get 30-39MPG. 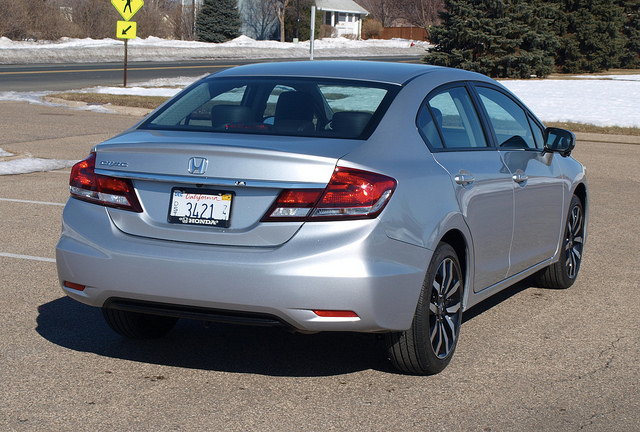 To get into a Civic, you may be surprised on how “little” you can get into one. An LX sedan with a manual gearbox starts off at $19,180. To get the EX-L as tested, you would have to fork over $23,530. To add the Navigation package, the register will ring up at $25,030 – the most you should spend on a Civic sedan without looking at the Hybrid or the Natural Gas model.

Having driven the Hybrid in this same generation, the regular old Civic sedan would yield a better driving experience. The word “lively” is used rightfully so as the Civic loves being chucked about and it simply drives well. A few annoyances may keep the experience a bit on edge, but one would learn to love this current generation of Civic.

However, has the early refresh of this current generation of the Civic earned the mantle of being the best one yet? I am certain there are arguments for and against making this claim. If you know your Civics well, you may agree that this generation may well be amongst the best.