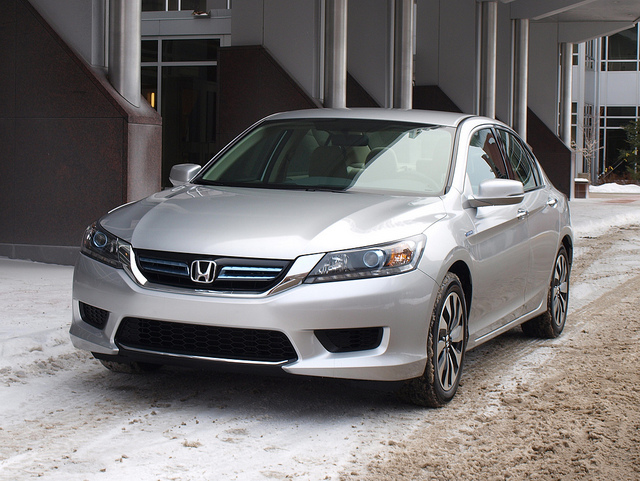 It might take a part or a mechanism to get it right. It could take a complete redesign to achieve the desired result from a different approach. Depending on what it takes to get to the ultimate goal, one thing is certain – the path to get there will be tough, but well worth it.

Over a decade ago, Honda and Toyota took different approaches to combining an internal combustion engine with an electric motor and a battery pack. While Toyota nearly perfected the formula – and sold it to its rivals – Honda had a bit of trouble selling their approach to the Hybrid. Was it too complicated? Was it even a full hybrid? Was it even worth the effort to sell its Integrated Motor Assist to a market already enamored with Toyota’s Hybrid Synergy Drive and its cousins?

Honda went back to the drawing board. They came up with a different approach to the Hybrid. Their first application of the new system is now under the hood of its best selling model in America.

This was the second time around for the Honda Accord Hybrid. Two generations ago, Honda mated the IMA system to one of their V6s. While its competition concentrated on four-cylinder Atkinson Cycle engines with electric motors, Accord touted better economy for its big engine without seeing the entire vision of mid-sized hybrids. The idea was to achieve higher fuel economy and lower emissions – MPG numbers in the 30s and 40s were dancing around the Accord’s lower fuel consumption.

This time around, Honda was ready. In this current generation, Honda went with an Earth Dreams 2.0 liter, four-cylinder engine – newly exclusive to this system – added an electric motor, a battery pack, and its new continuously variable transmission into an integrated power management system. Internally, Honda calls this their Sport Hybrid Intelligent Multi Mode Drive (i-MMD). 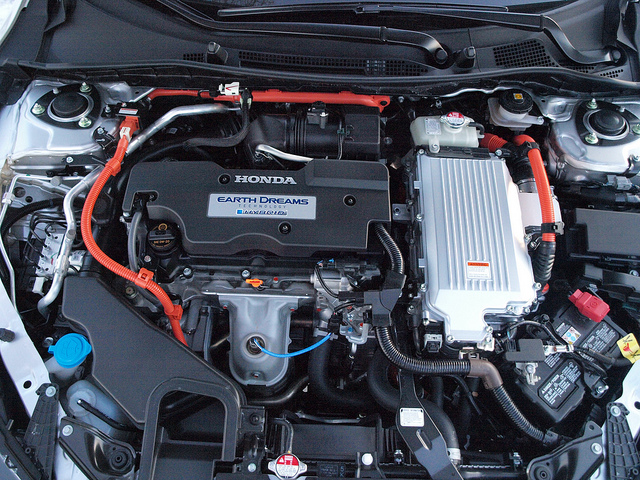 Taking power to the front wheels is a continuously variable transmission – the best match for any hybrid. The flexibility of the CVT allows seamless transitions between the gas and electric motor and smooth delivery of power when needed. You do hear the gas engine when you depress the accelerator on those occasions when you need it. For the most part, the operation is quiet – as you expect from an Accord.

Unlike most hybrids, the Accord does not exactly feel like one. It drives like a regular Accord – specifically a four-cylinder model. The instrumentation, the grille, the alloy wheels, and some of badging may look different. Even if you replace it with the components from a normal Accord, one might not tell the difference.

There are a few marked differences, however. Starting up is quiet – for the most part. The only way you know you started up is a series of chimes and the green “Ready” light on the instrument cluster. You will hear the gas engine rev up – and that is about it. Still, the start-up is instant and you could easily get going even in the coldest of mornings.

Is it quiet every other time? For the most part, again, yes. The Accord is one of the quieter cars in its class. You do hear some tire noise from the low-rolling resistance Michelins on some surfaces and, when the accelerator is pressed, the gas engine will wind up with the CVT. The latter is discerning since it felt like it was stuck in a gear under hard acceleration. The CVT was definitely the culprit in that situation. 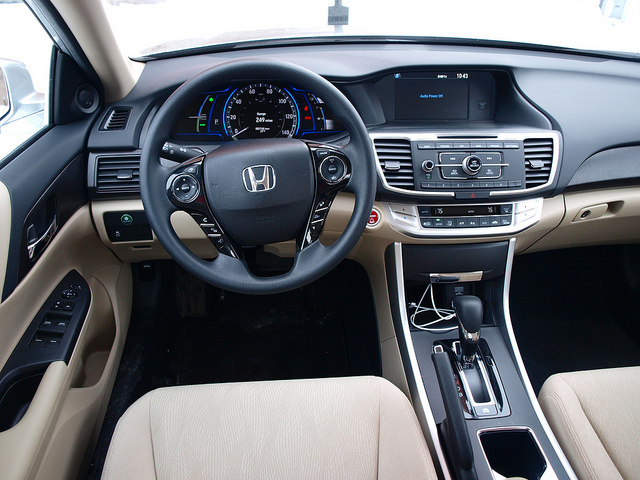 The base Hybrid is equipped similarly to a four-cylinder EX model. You get a reversing camera along with a right-side, blind-spot camera when engaging the turn signal. There is an AM/FM radio with Bluetooth, USB, and Auxiliary port connections, dual zone climate control, and power seats.

The seats are as comfortable and supportive as they are on the regular EX four-cylinder sedan. Taller drivers may want to find a place behind the wheel that would be lower than you are used to in a mid-sized sedan. Rear seat room has not been compromised by the battery pack behind it. You still get plenty of room for two adults – maybe three. However, those rear seat backs do not fold down for extra cargo because of the aforementioned battery pack. Trunk space is a bit shallower, but big enough to swallow an extended weekend’s worth of luggage for four.

Honda claims you could get up to 50MPG on the new hybrid. You could, but the reality in this test environment was different, simulating every day commuting and mixing city streets and freeways. The fuel economy on the hybrid ended up being 33.8MPG. This was due to sub-zero temperatures and poor conditions in a winter environment.

The base model Hybrid tester was priced at $29,945. For the sake of comparison, the similarly equipped EX four-cylinder model with the CVT comes in with a sticker price of $26,470. 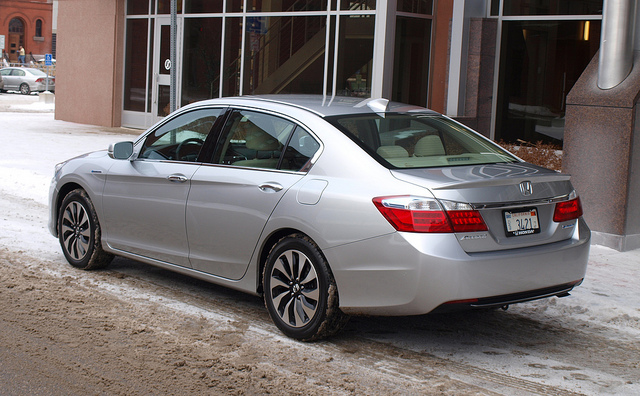 That brings up a question: Is the Hybrid worth the extra $3,475? If you live in a perfect climate, drive on the light side, and are truly committed to living a green lifestyle – then the answer is “yes.” It is a Honda Accord with a new hybrid system that actually works while retaining the normality of an Accord. You might simply go for the standard EX with the regular four-cylinder. You will lose more than a few MPGs in the process, however.

It is a huge debate – to hybrid or not. If you choose a hybrid – even in the most competitive segment for gas-electric combos – rest assured, Honda got this one right.