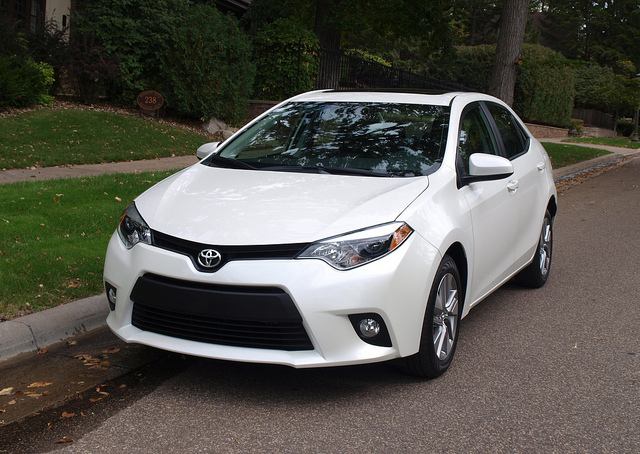 After 45 years, ten generations and over 10 million units sold in the USA, the next chapter begins.

The Toyota Corolla is in a ripe position for this new chapter in its history. Its competition has gotten better. The market has become important in this country. People are finding that they could do more with less money, despite the increasing prices of compact cars. They now demand more space and efficiency in their smaller cars.

Toyota watched and listened, while developing the eleventh generation Corolla – the E170.

The new Corolla promised a balance of the familiar with several improvements along the way. Toyota pushed for higher quality inside and out, along with advancements to keep drivers happy. That is a lot to ask a motoring public to embrace, even though Toyota sold over 23,000 Corollas last month in the USA.

A chance to drive one of the new E170 Corollas came about, just as the first units began to arrive at local dealerships. I wondered whether this Corolla is indeed a marked improvement over the last several generations of this car. 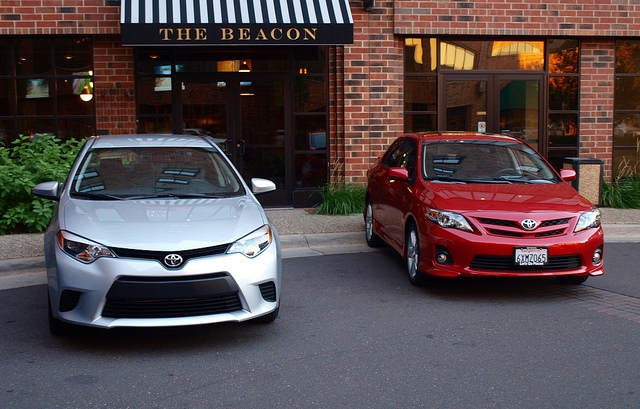 Up until this point, the only Corolla that I considered “good” was the E80 generation, covering model years 1984 to 1988. This was the first front-drive generation that included the potent and fun Corolla FX16. The last generation model provided a few surprises to actually enjoy it on a long trip from Minneapolis to Road America in Elkhart Lake, Wisconsin this past May.

Therefore, I only have expectation for the E170 Corolla – it better be good.

On the outside, Toyota stepped up its game for its global bestseller. The Furia concept debuted at the North American International Auto Show in Detroit this past January with a nod as to what the E170 would look like. The basic tenets of the Furia can be seen in the new Corolla – aggressive front end, new side glasshouse and a very alluring rear end. Though there is plenty of evidence of evolution over previous generations dating back to 1988, the Corolla sports some very extroverted design elements to change perceptions of this car.

It is very safe to say that no one will find the Corolla boring anymore. Even in its more basic model, the L, the front end denotes a more aggressive look while delivering value at the same time. The S model is where things get interesting, with a more aggressive lower grille and texture, along with larger rims and low profile tires.

The biggest improvement for the Corolla is its doors. They are larger than ever – I might even say they open larger than the E80 generation. By mentioning these doors, another big improvement awaits once they are open. 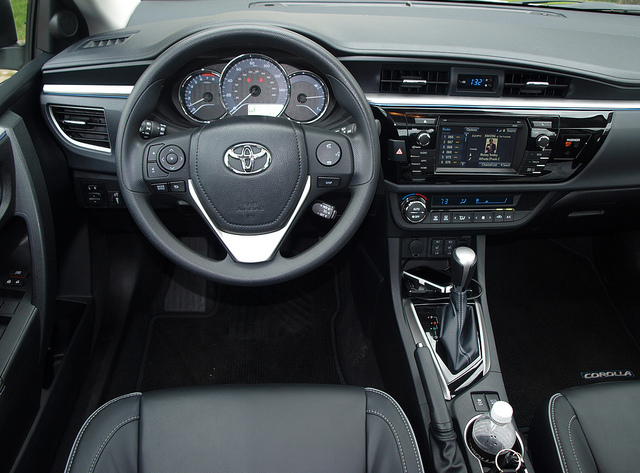 The E170 Corolla is now the roomiest version in its history. One would say that it is not only roomier than the E80 from the 1980s, but also slightly roomier than the second generation Camry. A longer wheelbase is party to credit for this, as now six-footers can happily enjoy the rear seats, especially when the car is full of six-footers.

The E80 was great for all drivers in an upright manner. Today’s E170 is a bit lower slung, but very accommodating for the same driver 30 years later. The seats are bigger than before. The S now features improved bolstering and a wider cushion and backing between them.

If you have been the latest Camry or RAV4 lately, you will notice a new ergonomic philosophy Toyota is employing across the board. For this Corolla, a few tweaks were used to ensure scale and versatility to the brand. The S models gets two big dials with a switchable TFT screen in-between them. Lower models – the LE and the new LE Eco included, go with a three-dial set-up and an LCD readout for trip functions in the bottom of the middle pod. It is safe to say that the Corolla received some upscale touches with more chrome and satin trim, along with better switchgear and higher quality materials across the instrument panel.

The center stack also changed towards incorporating Toyota’s Entune audio systems. The L gets by with an LCD readout, dials and buttons to accommodate standard Bluetooth and USB/iPod connectivity, but that space is really designed for a larger TFT screen and minimal switches for the infotainment suite. The more popular LE, LE Eco and S models would see more of these screens when delivered to customers.

Customers may also choose an enhanced App Suite to go along with their Entune systems. You can now get Facebook connectivity, along with iHeartRadio, OpenTable and other associated apps straight from your mobile device. Normally there is a subscription fee to use this suite, but Toyota now offers this service for no additional charge. 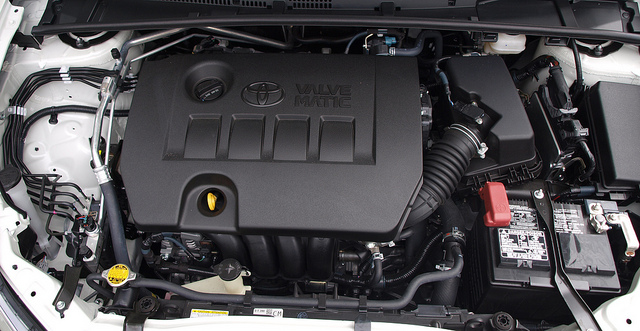 Open up the hood and you may not be surprised to find that the basic engine remains the same. Toyota continues to offer its sturdy and bulletproof 1.8liter four-cylinder engine with 132 horsepower and VVT-i as they have for the past few years. Choose the LE Eco, and that same engine gets Toyota’s second-generation Valvematic system and an additional eight horses. Valvematic is designed to ensure proper intake flow with regulated valve timing. The result is better efficiency with better power delivery – something we have been asking Toyota to deliver for us.

For both versions of the 1.8liter engine, a new transmission is added to the lineup – a continuously variable transmission. The CVT is available as the standard transmission for the LE, LE Eco and S. This alone is the biggest improvement for the Corolla, getting the most out of both engines with right gearing and shift points. The result is a drop in highway cruising revs – the Valvematic engine now cruises at below 2000 RPM. Another result for both engines is increased flexibility and reaction to throttle changes. They no longer seem stressed and underpowered, but, rather, powered right for the new Corolla.

In terms of driving dynamics, you can truly feel that Toyota made a serious effort on making the Corolla a better road car. The lack of roll and lean on both the LE and LE Eco that were driven were astounding. At regular speeds, the Corolla cornered near flat. You do get some roll on higher speed cornering, but there is plenty of control to keep things gathered in and out of the turns. Steering has been worked on, with absolutely no play of the wheel on center and some feel on the turns. A good small radius on u-turns adds to this strong steering system. Braking is quite good, also. 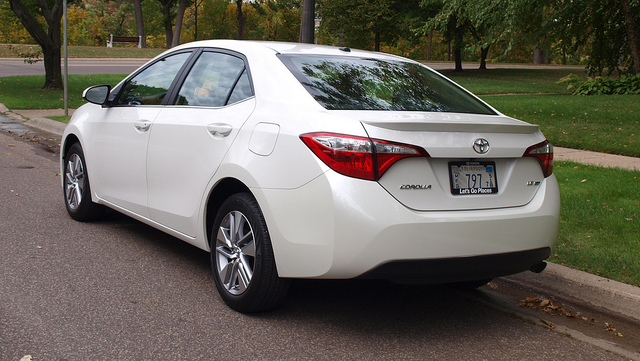 One conversation overheard at the event where the 2014 Corolla was driven was about the factor in price, quality and vehicle components. As much as we want independent rear suspension, higher quality interior materials akin to the larger Avalon and so forth, the Corolla must remain a leader in its class for Toyota. To do so, Toyota chose to do many improvements to the Corolla and hold the line on pricing to attract both repeat and new consumers alike.

What consumers will get is one of the most improved vehicles for the new model year. This is evidenced on the work that Toyota put into the Corolla and the execution of its driving manners and abilities.

The simple fact of change is that it is absolutely necessary when called upon. The segment has changed, as have the marketplace. The Toyota Corolla had to change because of these conditions. The result is a much better compact sedan with key improvements that will keep it amongst the leaders – if not, wrestle the top spot back from the current status quo.

This new chapter is being written before our very eyes. So far, it reads like a best seller – a well executed one. Expect more of this good thing – 45 years in the making.