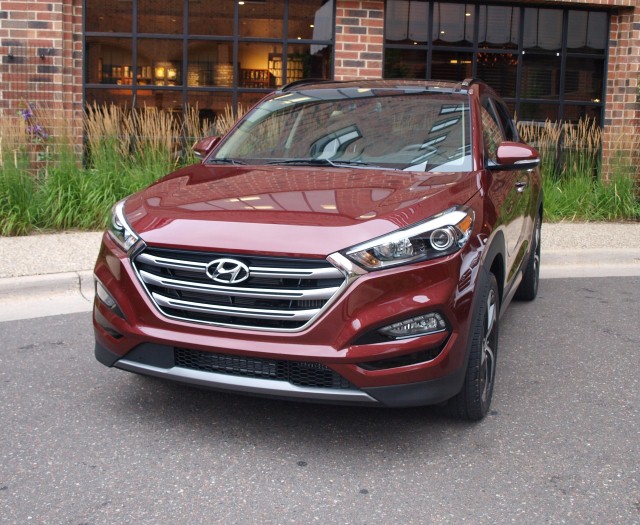 The message from Hyundai was clear: They need to sell more “trucks.”

By “trucks,” Hyundai Motor America means leveraging the growth in crossovers, SUVs, and pickups. In their case, it is all about the crossover, where sales have jumped impressively over the past few years. Lower-priced gasoline and growing families drive this segment. In our case, growing GLBT families.

So far, Lavender reviewed two of Hyundai’s crossover offerings: the Santa Fe and the Santa Fe Sport. Both are considered “mid-sized” models, where its growth has leveled off due to rising prices and, ironically, the need for better fuel efficiency. The real growth is in smaller crossovers, such as the Honda CR-V, the best selling vehicle of its type in America.

Hyundai had some success with its small offering, the Tucson; yet, it never captured the imagination of those that ended up buying its rivals. It was competent, but that’s about it. To eat into the sales lead of the CR-V, Nissan Rogue, and the like, it has to be a home run. It has to offer more in terms of design, comfort, capability, technology, safety, and value.

Maybe this all-new 2016 Hyundai Tucson will fulfill this mission.

To find out whether the third-generation Tucson was up to the challenge, it only took a short drive to the University of Minnesota’s East Bank and The Commons Hotel to see for myself. It was just a preview of coming attractions, but what better way to see this new offering from Hyundai up close than to take it on some familiar roads with some fellow journalists visiting our fair Twin Cities. 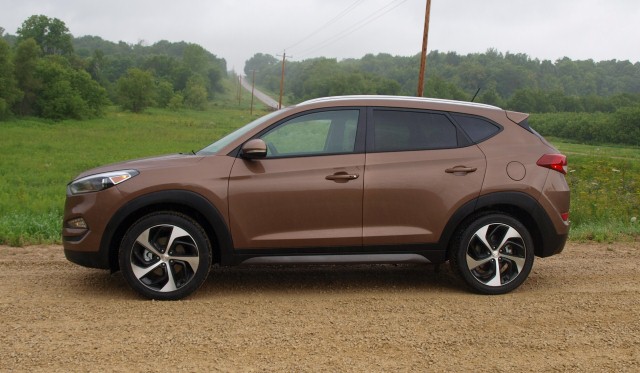 Before we go any further, there is a lot that is new about the Tucson. It is now lower, more spacious, and full of new technology. That is the simple way to put it, yet there is a lot more to the 2016 Tucson.

Hyundai developed the 2016 Tucson with three attributes in mind: bold and dynamic design, efficient performance, and advanced technology and safety. In terms of design, it is much better to look at, given the familiar brand cues from the Sonata and Santa Fe Sport. These cues were enhanced with a wide appearing rear bumper, muscular wheel arches, and an overall wedge-like silhouette. Hyundai also increased the wheelbase and overall length from the outgoing model and lowered the Tucson for a better profile. The result is a handsome crossover that is contemporary, but not over the top, visually.

To get efficient performance, the 2016 Tucson had to be lighter, stronger, and on target against its competitors. Curb weights start at 3,325 pounds, which is considered light for a vehicle in its class these days. The difference between the lightest and heaviest 2016 Tucson is about 400 pounds. Hyundai strengthened the structure by using 51 percent advanced high-strength steel, compared to 18 percent on the outgoing model. There is definitely a commitment to solidifying the 2016 Tucson toward better crash protection while increasing the ride quality.

Powering the 2016 Tucson are two engines: a 2.0-liter four-cylinder carried over the outgoing model and a 1.6-liter turbocharged four-cylinder that was driven in the 2015 Sonata Eco last year. The latter has 175 horsepower, which is matched to a 7-speed dual-clutch transmission, as experienced in the Sonata Eco. All models are available in either front- or all-wheel drive. Some models also offer a driver-selected mode to change the way the transmission and engine perform, between Eco, Normal, and Sport. All-wheel drive models come with a system lock that splits power 50/50 front and back for better traction. 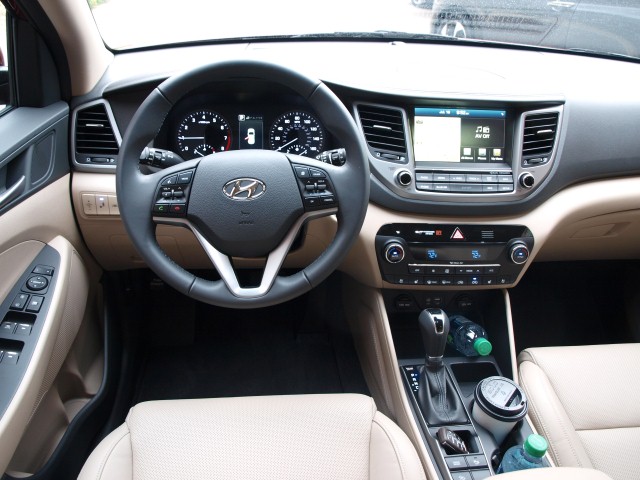 The interior actually follows some cues of the newest Hyundai models — the Sonata and Genesis sedans —with a more contemporary setup that is beneficial to the driver. Depending on model, the infotainment screen is standard with a 5-inch or an 8-inch display. You can control apps on the vehicle side with the larger 8-inch screen, which include Yelp and Pandora. Siri eyes-free voice commands are now integrated in the 2016 Tucson. The BlueLink telematics suite also received some enhancements, including connectivity using the AppleWatch app.

Cargo space did increase over the outgoing Tucson, now at 31 cubic feet behind the second row of seats. The cargo cover can now be stored underneath the floor in the back, or the cover for the floor could be removed to increase the cargo height by two inches.

The 2016 Tucson now offers more safety technology than before. Standard equipment includes a rearview camera available in both the small and large screens. Other new features to the Tucson include lane departure warning, automatic emergency braking with pedestrian detection, blind-spot detection that is now a radar-based system, lane change assist, and rear-cross traffic alert.

While there is a lot to explain on what’s new on the 2016 Tucson, one had to put all of these to the test on the road. During this media event, I drove two 2016 Tucson models, a Limited with front-wheel drive and a Sport with all-wheel drive. Both examples had the 1.6-liter turbocharged engine connected to the 7-speed dual-clutch transmission. This is really the engine/transmission combination to get with its quick shifts and good response from the right foot. 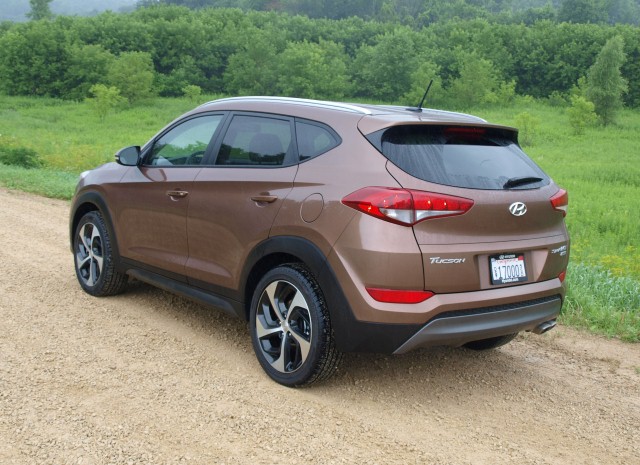 Both of these 2016 Tucsons held up well on the wet roads we drove on in Western Wisconsin, mainly in Pierce and Pepin Counties. Handling was quite good, keeping the Tucson level through the curves, while maintaining a smooth ride throughout. Brakes are very good with great stopping power in both normal and panic situations. The Tucson’s weakness was in the steering, as it lacked some real feel at the wheel. On-center feel was pretty soft with some play to keep it within the lines. Turning was fine without any need for correction.

I liked how contemporary the 2016 Tucson looked, as it truly was a visual improvement from the last model. It is a nice vehicle to look at, and that is what we need in this segment. Interior-wise, the new Tucson is roomy, comfortable — both the Sport’s cloth and the Limited’s leather upholstery were good to the body on longer drives. It is a good vehicle to take on long trips without fatigue.

Pricing for the 2016 Tucson is right in the heart of the class, with a base price for a SE front-drive model of $22,700. At the top of the range is the Limited with the Ultimate package and all-wheel drive coming in with a base price of $34,050.

Though Hyundai is making a commitment to sell about 90,000 Tucsons a year in the United States starting in 2016, it is not enough for the brand to catch up with the leaders in its class that are selling between 20,000-30,000 units a month. It is a shame, since this 2016 Hyundai Tucson has the goods to be a leader in its class. 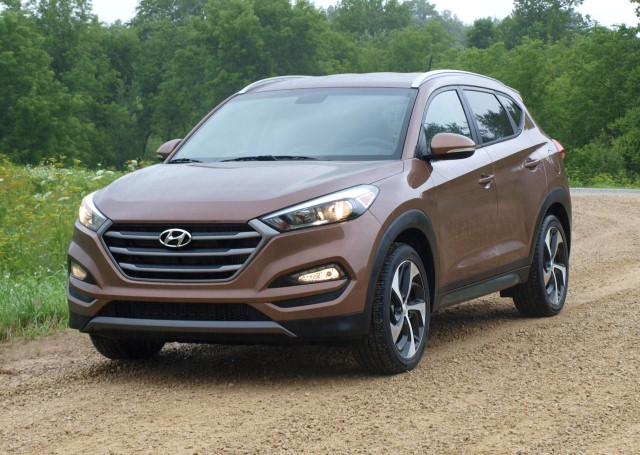 Hyundai wants to expand its footprint of “trucks,” especially its three crossover/SUV models. To compete against the leaders is to stress what it does best — be advanced, safer, efficient, powerful, and contemporary. The 2016 Tucson certainly will find plenty of buyers wanting something better than what is being offered currently. It has to. And this is a very good start.

The 2016 Tucson should be at Hyundai dealerships as you are reading this — if not, soon.