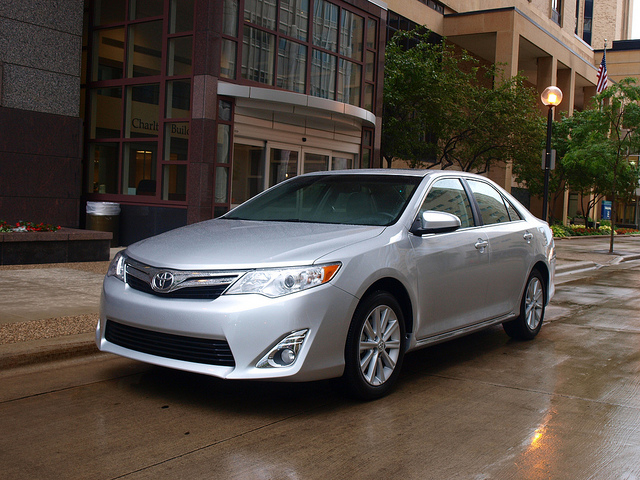 This is the best-selling passenger car in the U.S.A.

If you are looking for a way to describe the Toyota Camry, this phrase is the most apt. It first took the title in 1997 and reached the top of the passenger car charts in the U.S.A. nine out of the past ten years. Nowadays, every Camry sold in this country is built here—deliveries are running 30,000-40,000 units a month.

Why has the Camry been so successful? For most of its life, the Camry represented the values of Middle America. It carried families, couples, employees, job seekers, and everyone else who needed a roomy sedan with plenty of power and good fuel economy. A Camry never inspired an enthusiast to carve a canyon road—unless you tweaked the SE model for optimal driving dynamics. Then again, no one envisioned it being the representative body shell for Toyota Racing Development’s NASCAR Sprint Cup racer.

The Camry has a long history dating back to the day it replaced the out-of-touch-with-American-motoring-trends, rear-drive Toyota Corona. For 1983, the Camry was seen as an advance for Toyota—a proper transverse-mounted, front-drive sedan for families. Since then, the Camry became the bread-and-butter for American motorists as a reliable, bulletproof, and inoffensive family conveyance.

My history with the Camry began with the second-generation model in 1987. I drove more than my share of them, finding the four-cylinder willing to do anything when the throttle was depressed. Braking, on the other hand, was an adventure.

With every generation of Camry, I always hoped for improvement. Bit-by-bit, they began to improve. The last Camry I actually enjoyed was a 2006 SE four-cylinder model. Any mid-sized sedan that can deliver 28MPG or more is awesome in my book. Not to mention, it was quite fun to drive—and rather nice to look at.

I should not throw a sledgehammer to the Camry just yet. I know plenty of friends who own them—my brother is on his second one. Yet, I continue to believe that Toyota will eventually create a Camry that would appeal to more than just those who buy them because of their history of bulletproof reliability and nothing more. 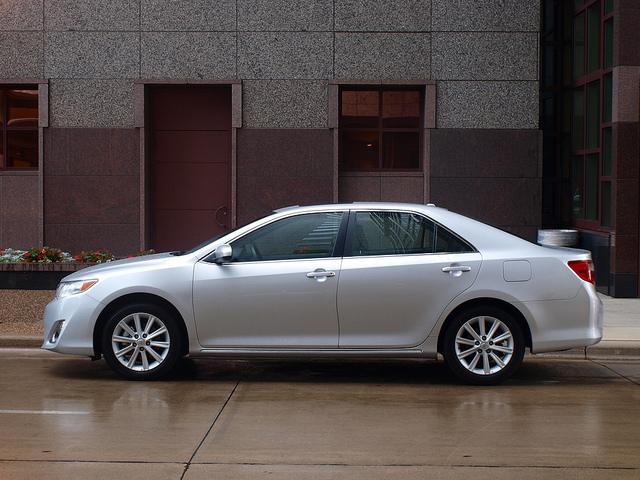 Perhaps this Camry will do the trick.

In its seventh iteration, the latest Camry is loaded with a new skin, a slightly tweaked chassis, more mechanical upgrades, and a better-configured interior. The reception for the new Camry has been positive by consumers and pundits alike. The new model continues to sell at numbers that keep the Camry on the best-selling passenger car mantle.

Starting with its new skin, it reminded me of the Camry from the early-to-mid-2000s. However, every part of the body was tweaked with Toyota’s latest design language fused with elements designed to accommodate American bodies of all sizes. From a distinctive, chromed front end to the “hockey stick” taillights, this Camry clearly sets itself apart with ambitions beyond being middle of the road. In all, it was a handsome silhouette.

Being this tester was the upmarket XLE, a few embellishments added to this top rung model. Some of them work well, such as the chrome trim on the rocker panels and the 17-inch alloy wheels. One thing that did not work well was the chrome strip across the trunk lid bridging the taillights. If you get the Hybrid version of the XLE, the Toyota logo stands out with black-and-blue inserts—unlike the regular four-cylinder and V6 XLE models. 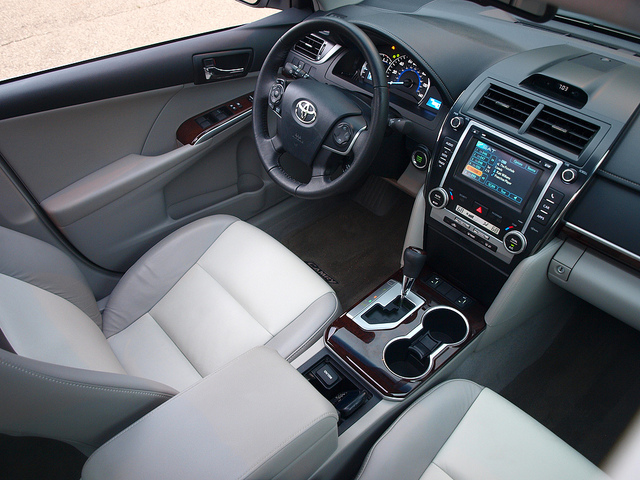 Step inside into the XLE’s optional leather interior, and you will be entertained with a twist on the old light gray color scheme. To compliment the wood grain trim on parts of the console and door armrests, a dark brown leather strip compliments the two-tone, light-to-medium gray hide on the seats. A dark gray finish was present on the top of the instrument panel. In all, the cabin felt comfortable, but it was rather functional as well.

Yet, that comfort is only as good as the feel inside the cabin. Toyota did a lot of work in making the Camry more engaging to the driver. There were plenty of switches within reach of the driver—including logical controls right on the steering wheel. Instrumentation was easy to read, though it would have been better if a proper temperature gauge supplanted the fuel economy gauge. Another suggestion would be to have the two small digital readouts for trip information and gear indication to have been better integrated with the rest of the instrument cluster.

Though the seats were big enough to accommodate many bodies, they had a few points to consider to the consumer. The front seats were comfortable, but not supportive with proper bolstering. Lumbar support helped the driver find the balance between comfort and support. The amount of seating space was extraordinary. Rear seat room was perfect for a full-sized North American sedan—big enough to accommodate everyone—at least two of everyone.

The Camry represented the first application of Toyota’s new Entune infotainment suite. Though you get satellite navigation, SiriusXM satellite radio, HD Radio, and the usual audio options, there is an additional suite of applications available to utilize in the Camry. These apps include iHeartRadio, Pandora, Bing, MovieTickets.com, and Open Table—with more to come. To enable these apps, you must have an Internet connection via your mobile device. Secondly, these apps may not be suitable to use while you are in motion. If you chose not to use these apps and concentrate on your audio options, be prepared for a lovely sound from six well-positioned speakers. 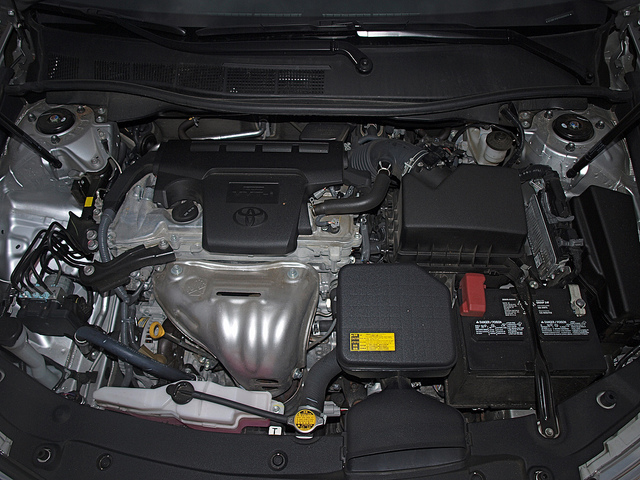 Most XLEs available at dealerships currently have the familiar 2.5 liter dual overhead camshaft, four valve-per-cylinder, variable valve timing four-cylinder engine under the hood. One could get the XLE with either the 3.5 liter V6 or the Hybrid Synergy Drive system with a four-cylinder engine. This tester came with the more popular 178 horsepower 2.5 liter engine, with 170 pound-feet of torque at ready. Performance from this engine is proven and strong. Do not let the engine’s specs fool you; the 2.5 liter was very happy taking the Camry and its passengers for miles on end.

Connected to the four-cylinder was Toyota’s latest six-speed automatic gearbox. Gear changes were smooth and responsive. Power was sent down ultimately to its front wheels, creating good traction in many situations.

When you drive the Camry, you expect it to be comfortable and solid on the road. The Camry rode well, doing its best to absorb road imperfections and other hazards. On smooth tarmac, the Camry just glides along without offense—just very soft and smooth. The penalty of being “soft and smooth” was some lean and roll in the corners and turns. Though controlled, it would be suggested to take it easy when taking a Camry through any winding road.

Turning the Camry induced great response with exact cornering. A bit of numbness exists, but not enough to hinder wheel response. On the flip side, one of my primary complaints about every Camry I drove was its braking action at the pedal. The brakes themselves were good, but the pedal action was still soft. Of note, it was a marked improvement over previous generations of Camrys.

If you asked one of the biggest reasons why people take delivery between 30,000 to 40,000 Camrys every month, it would be the fuel economy. In this very popular segment, we expect the most out of our family transport. The Camry did not disappoint when it turned a 30.4MPG average in fuel consumption. This is a mix of city and highway driving—a remarkable number even without an electric motor attached to the internal combustion engine. 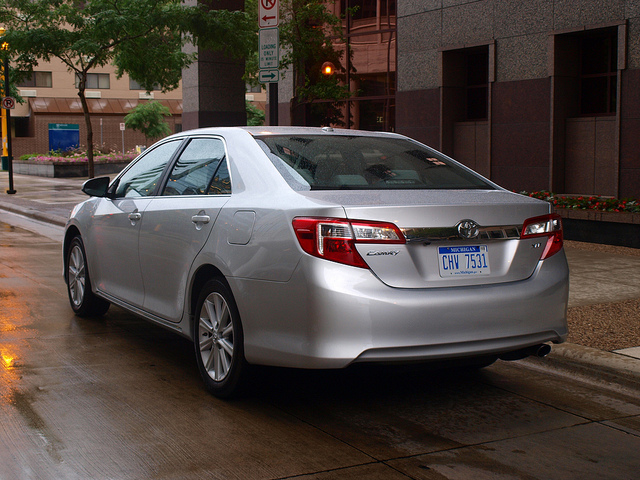 Camrys are a great value, especially for those of us looking for a sedan that does more than the daily commute. You can get a Camry at a starting price of $22,815. Most of the XLEs on the lot, equipped with the four cylinder engine and cloth seats, are being priced in the $26,000-27,000 range. The leather-lined, Entune, and navigation-equipped tester topped out at $29,430. Camrys continue up through the $30,000 barrier when you add the 3.5litre V6 or the Hybrid Synergy Drive and even more luxuries.

For almost 30 years, the Camry has defined the heart of Toyota’s North American lineup. It represents the values of Middle America. It does not offend anyone or pretend to be something that it is not. Among those who have taken delivery of a good percentage of Camrys happen to be in our own GLBT community.

However, the segment has been getting better. There is a threat to the Camry’s leadership at the top of the passenger car heap, as well as the mid-sized family sedan market. While the two-year-old Hyundai Sonata and Kia Optima built a reputation from their styling departures and solid performance, newer competitors, such as the upcoming Ford Fusion and Nissan Altima, are making their case to topple the Camry from its pedestal.

Frankly, the Camry is a good car. Every improvement was made to ensure its position in the marketplace. This was what Toyota intentioned when they released the newest Camry a year ago.

There should be no apologies for driving the best-selling passenger car in the U.S.A.