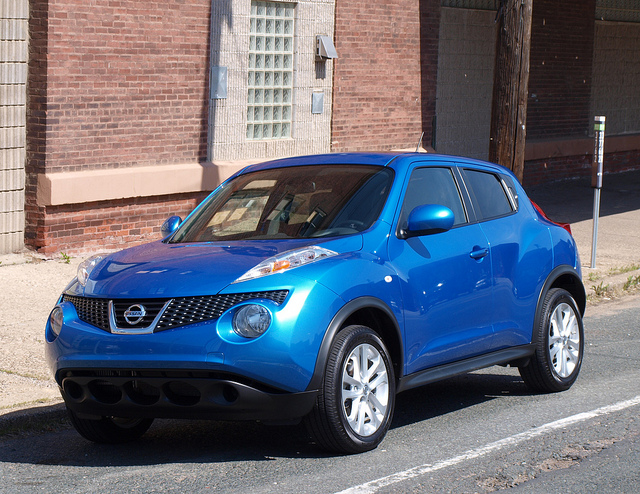 We are a community that appreciates art and design.

Among our own are creative people—the creators of art. When we create, our minds take in ideas that either engage or distract the eye. Those ideas are transmitted to our hands where we use an instrument of creativity to work through the basic ideas towards a work of art.

From a sculpture to a poem to a video, creative people share a common ideal—an appreciation for different images and voices. We embrace what is different as it rubs against the so-called norm.

It is easy to dismiss the Nissan Juke upon first sight. However, the creative minds among us understand where this design came from.

This is the quandary among both creative people and automotive people. Is the Nissan Juke art? Or, does it have a place on our automotive landscape?

What is a Juke? It is the vision of Nissan’s London-based design team to create a shape that can be both enticing and polarizing. This body is draped over Nissan’s B Platform, the same chassis that spawns the current Nissan Versa sedan and the upcoming NV200 van—the passenger version becoming New York City’s newest taxicab. The result is a vehicle that defies convention and refuses to be classified, though it is being thrown into a growing new segment among compact crossovers.

The first thing one must do with a Juke is to take a few steps back and look at it. There is a lot going on design-wise with many influences melded into this so-called “sportcross.” Up front, there are some World Rally Championship elements ranging from the lower grille and the embedded headlamps. The upper lights may have come from somewhere in the early 1940s. The actual grille itself is completely different, but with familiar Nissan design elements involved.

To the side, you can see where the inspiration may have come from—if the 370Z and the Murano had a baby incubated on a frying pan. Seventeen-inch alloy wheels shod with Goodyear Eagle RS-A rubber add an interesting piece to the puzzle by creating a rally-inspired look and additional ride height to the Juke. The Z-Murano crossbreed continues to the rear with obvious paeans to either vehicle. 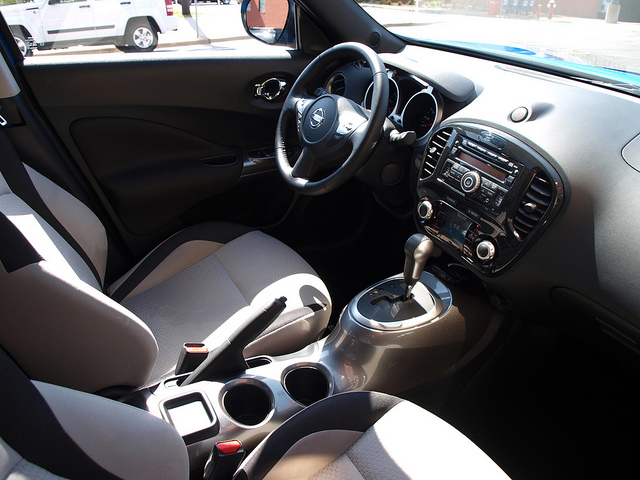 Step inside and there are plenty of artistic pieces that challenge the eye on many levels. The instrumentation may look normal, but it is topped by an elevated canopy of satin-finished silver. The center stack is graced by a piano black surround of an oblong shape. The center console was said to be inspired by high performance motorcycles. The console offers up another contrast to the interior—finished in gray metallic. One complaint centers in the same area, as the gear lever appears to be too high for most drivers. The rest of the switchgear feels “normal”—right to the touch—and the materials are of good quality.

The Juke SV seats four in a cloth that feels almost like neoprene. The combination black and oyster gray has a scaly texture that reminds one of a body suit. Though it feels good, the front seats felt short in the cushioning and would probably need more side bolstering. Also lacking is a center armrest for the right arm to rest when needed. Rear seat room may seem small, but if you had average sized adults, they would be fine in all four places. Anyone larger will have a problem with legroom in the back. The rear seats also fold down to expand the cargo hold.

Nissan’s standard-issue audio system is on board with six well-placed speakers emitting a well-balanced sound. The one little trick is with dialing in XM, as it is under the AUX button, if equipped. You also get Bluetooth connectivity along with iPod integration.

Below the audio system is the Integrated Control System, known as I-CON. This starts out as a run-of-the-mill climate control system. Press the D-Mode button, and it provides the driver a choice of vehicular behaviors. Normal is where you begin journey. If you want to induce more fuel efficiency, you select the Eco mode, which changes the transmission and engine management behavior toward achieving economical results. Switch to Sport, and it ratchets up the transmission ratios and engine management settings to maximum power. Keep it in Sport, and you will feel the turbocharger kick the Juke into action.

The I-CON screen provides other readouts to monitor vehicle performance. If you care about G-forces, turbo boost, torque action and monitor your fuel consumption, there’s plenty of information packed in that little LCD screen that would normally tell you your vehicle temperature and fan speed. One could always switch back to Climate mode to have the latter viewed, as long you know what drive mode you are in. 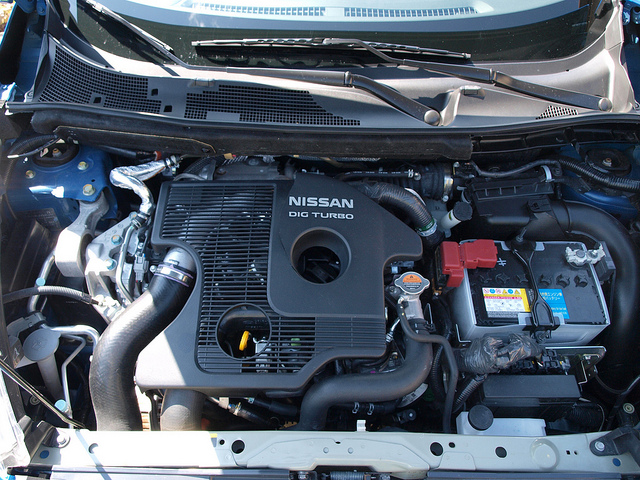 What motivates this mobile piece of art is the newest engine built from a company that knows how to make power plants. Nissan took their standard issue 1.6 liter dual overhead camshaft, four valves-per-cylinder, four-cylinder engine, and ratcheted it up a notch. They added direct fuel injection and slapped a turbocharger onto it. The result is a 188 horsepower ball of fire. Unlike most small turbocharged engines, there is no lag; the power is immediate and strong throughout the power band.

Connecting this powerful mill is Nissan’s Xtronic continuously variable transmission. The hallmark of this CVT is the ability to lock into the right ratio with the right engine speed as dictated by your right foot. This particular Juke comes with Torque-vectoring all-wheel drive with a switch that locks the system to only front-wheel-drive or all-wheel-drive. There is a third setting in the middle of this switch—AWD-V. Choosing this mode gives the Juke permission to decide which wheels it wants to send power to.

When driving the Juke, you will notice the sport part of the crossover. The ride is somewhere between firm and semi-soft, but you do feel the imperfections on the road. Handling is decent, though you get plenty of roll on banked curves. The Juke has plenty of grip from its Goodyear Eagle RS-A tires. Steering action is quick; however, there were times when the turning radius could have been better. Overall maneuverability is quite good considering the stubby size of the Juke. Braking is sharp and sure on both regular and panic stops.

When Nissan created the Juke, they wanted it to achieve optimal fuel efficiency despite being a high-riding and powerful compact crossover. They slapped the newest Pure Drive badge on the rear end of the Juke to let the world know it is part of Nissan’s commitment to more fuel efficiency and lower carbon emissions from their products. Though inspiring as the badging and promotion may sound, the Juke still turned a fuel economy average of 25.8MPG. Not exactly worthy of the Pure Drive badge to be honest. 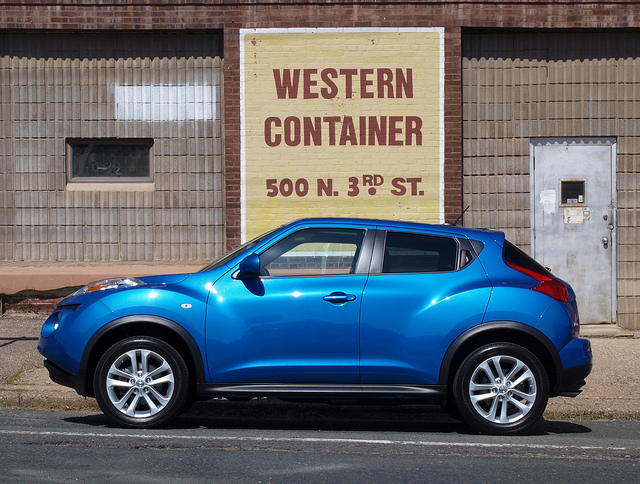 How much does this piece of art cost? Though the Juke starts at just above $20,000, this SV AWD tester stickered at $24,540. As with most pieces of art, there will always be a quibble whether this price of admission is justified or perhaps relative to the marketplace. There are plenty of arguments for either case.

Let’s be frank here: The Juke is different and stands out among other vehicles. It is an acquired taste for those who may not understand the attraction to objects of art. The creative eye would enjoy the many curves and angles of the Juke—along with the way it drives.

There is one thing to know about the Juke—it is on the cusp of two different movements. The compact crossover market is about to boom with the arrival of the BMW X1, Audi Q3, and Buick Encore to join the Juke, Suzuki SX4, MINI Countryman, Kia Soul, and Mitsubishi Outlander Sport here in the States. Among these contenders (and pretenders), the Juke may appear to be the “odd one out.” Buying one means using your imagination as to how you would use it daily.

The second movement is another makeover of the Nissan brand—a very necessary one. The Juke is the first of the new wave for Nissan including the new Versa sedan, the upcoming 2013 Altima, Pathfinder, and three other models under the white sheets in the latest commercial from the brand. However, the Juke signifies plenty of new design elements we will see in the next 15 months.

As for that engine—I certainly hope we will see this in other Nissans in the next few years. This one’s as good as the company’s award-winning VQ V6s.

For those of who appreciate art, or would simply like to stand out in a crowd, there’s really nothing wrong with owning a Nissan Juke.