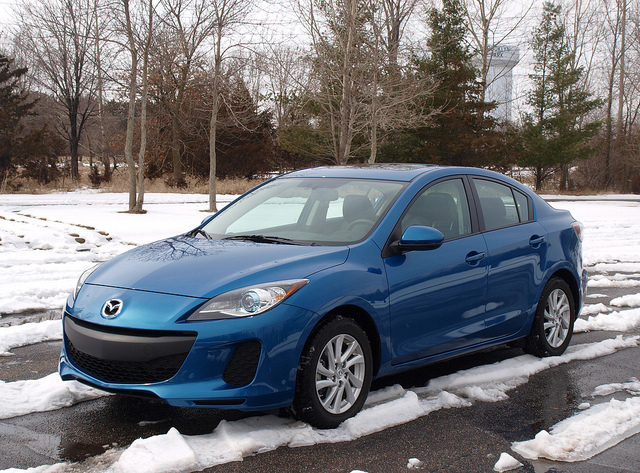 2012 Mazda3 i Grand Touring 4-Door. All Photos by Randy Stern

2012 Mazda3 i Grand Touring 4-Door. All Photos by Randy Stern

How does one describe “Zoom-Zoom?”

If you’ve seen the commercials and advertisements for Mazda’s vehicles, then you know what “zoom-zoom” is. It is the tag-line of an automobile company that always had an enthusiast bent. Whether it was economy cars, pickup trucks, crossovers and roadsters, the notion of “zoom-zoom” is felt when you find the most mundane feature had an aggressive feel to it. It is as there’s a bit of a sports car in everything Mazda sells.

This is not just a mere marketing gimmick. Ask any owner – current or former.

How much of an effect does “Zoom-Zoom” have on this former Mazda owner (mine was a 1979 626 coupe – that was 25 years ago)? When this Mazda3 showed up at my front door, I began shopping for driving gloves and a racing helmet…

Luckily, I did not buy any track day paraphernalia. That was when I found out that this particular Mazda3 claimed to get 40MPG on the highway. In other words, I had to forgo leathering around Highway 101 in Carver County and consider hypermiling on Interstate 94 towards Saint Cloud instead.

The Mazda3 has been the volume seller for the brand of late. In the compact field, the Mazda3 stood out as the enthusiast’s choice above the volume sellers, such as the Ford Focus, Chevrolet Cruze, Honda Civic, Hyundai Elantra, Toyota Corolla…etc. Offered in both sedan and hatchback, the Mazda3 always gave the driver some aggressive settings in performance and handling. One does not buy a Mazda3 for practical reasons alone.

Now, there’s the claim of high fuel efficiency. How does this change the character of this enthusiast’s compact?

The source of the 40MPG claim is from a new family of Mazda engines and transmissions called Skyactiv. The engine may look like its normal 2.0litre dual overhead camshaft, 16-valve engine available on the “i” SV and Sport models, except for a few differences. Power is upped to 155 horsepower and the compression ratio scales up to 13:1. Mazda claims that the engine now develops 10-15% more low-to-mid-range torque while yielding a 15% improvement on fuel consumption. Mazda added direct fuel injection and created a piston cavity that facilitates better air-fuel mixture towards yielding the claims Mazda is making on this engine.

It all sounds great on paper. In the real world, it’s just like any other engine. More on that later…

Some of us may be already acquainted with the Mazda3 as it effectively replaced the Protégé for the 2004 model year. In its second iteration, the familiar aggressiveness of the design was treated to some nice visual changes – big mouth grille, included. For the 2012 model, a few nips and tucks were made to help the Skyactiv do its job better. Still, it remains a handsome standout amongst the competition.

The tester came as a four-door sedan in the Grand Touring trim in a lovely shade of bright blue – appropriately named Sky Blue Mica. New to the Mazda3 is Adaptive Front-lighting System – a feature normally reserved for more premium vehicles. Available only as part of the Tech Package for the Grand Touring model, the AFS works as the headlamp beam swivels to the direction you want to go – based on speed and actual steering effort. The system works extremely well making night driving a pleasure instead of a chore. The 16-inch alloys were shod with Bridgestone Blizzaks – snow tires without studs. In all, this is a no-nonsense, all-business compact sedan that looks for trouble in any weather. 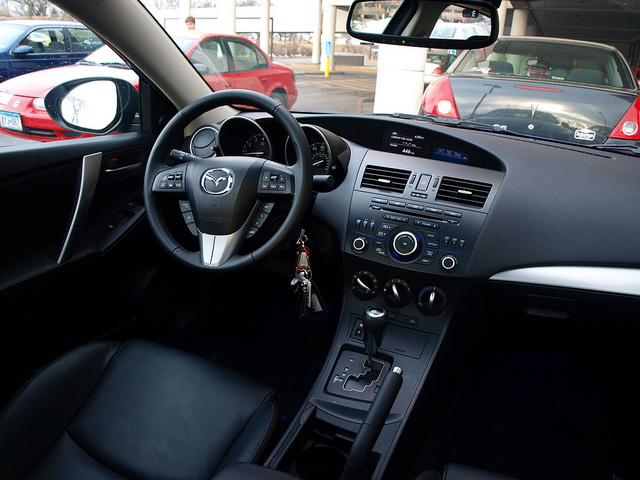 For the second generation Mazda3, a serious interior refresh provided some important ergonomic changes starting with an improved instrument panel. Two big dials command your direction with the speedometer and tachometer flanking a small digital fuel gauge and odometer. Above the center stack sits two screens: One LCD, the other LED. The LED displays audio and climate control readouts, while the LCD houses a multifunction display along with satellite navigation – a part of the Grand Touring package. If you are concerned about fuel economy, click through the screens and it will be right in your field of vision.

One feature that stood out was the Blind Spot Monitoring system – another part of the Tech Package. If you’re in a hurry and need to make a lane change, if another car is within your zone – the indicator pops up within the side mirror. The BSM indicator flashes at you until the vehicle on either side of you is clear from your zone. It is a fine feature and something you rarely find in this class of vehicle.

Sound comes from a Bose Centerpoint audio system designed to optimize the Mazda3’s cabin with a full sound from 10 speakers. It’s pretty good for an audio system in a compact sedan. You get AM, FM and SiriusXM radio along with an auxiliary jack in the center binnacle for your MP3/iPod player. There were times when the SiriusXM signal would cut out, then return – an annoyance for those of us who need our daily fix of Rosie O’Donnell, Frank DeCaro and Michaelangelo Signorille, if you ask me. The phone connects easily through the Bluetooth, along with any music stored in your device.

The Grand Touring comes with leather seating. This Sky Blue Mica model came with a stark, but business-like black monotone scheme. The front seats offer a balance of comfort and bolstering designed to induce spirited driving. Rear room is a bit tight for larger adults, but it should be fine for other humans, pets and some cargo. Rear seats fold down to expand a decently sized trunk. Cargo and luggage will have to be stepped down for loading. 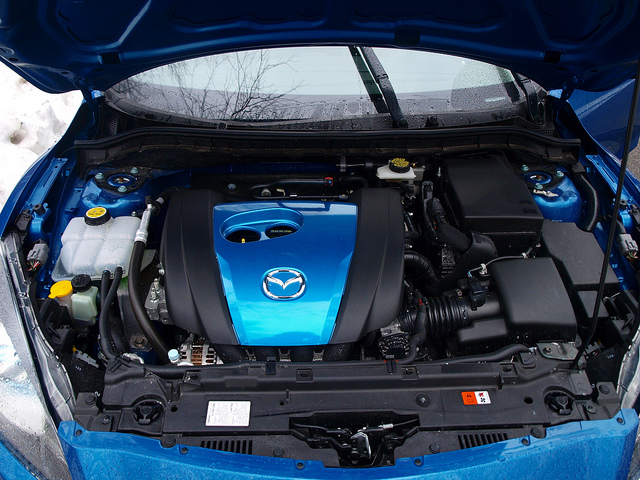 As stated before, the Skyactiv 2.0litre engine simply feels and acts like a normal compact sedan engine. However, it lacks that glee a Mazda engine gives you when you give it plenty of throttle action. The Mazda3’s standard MZR engines love to scale through the rev range giving the driver plenty of assurance of its willingness to respond to your right foot. The Skyactiv tries hard to do that, but it falls short of expectations – especially for enthusiasts. Partly, some of the lack of rev action may be due to the 6-speed automatic gearbox mated for the Skyactiv engine.

If you are not an enthusiast and would prefer better fuel economy than performance, you will like the Skyactiv and the way it goes about its business. Otherwise, you would not be faulted for choosing this engine over the MZR 2.0litre, the more powerful MZR 2.5litre or the turbocharged Mazdaspeed3.

This front-drive sedan usually gives the driver a treat when running along any road surface – a hallmark of any Mazda3. It begins with the way it handles. Take Mazda3 on any road and it wants to hug it. With the Skyactiv drivetrain, Mazda did not mess with the way the 3 handles, takes corners and tracks on any surface. An added bonus on this tester was the Bridgestone Blizzak tires mounted onto its 16-inch allow wheels. Blizzaks are studless winter tires – made for tackling the snow in any performance automobile. A little run in the snow and ice added another qualification to the 3’s resume: Excellent winter driving ability with the right set of tires.

For the record, 16-inch Bridgestone Turanza touring tires come standard with the Grand Touring model with the Skyactiv engine.

There is an offset to great handling – a taut ride. The ride package became unforgiving on road imperfections as it refused to absorb bumps and other uneven surfaces. Another part that usually marks the 3’s excellence is in the steering. Normally, I would the turn the wheel of the Mazda3 (or the bigger Mazda6) and it would plant me where I need to be. It does exactly that, but not with the sharpness I found previously in other Mazdas. I also found some play in the steering wheel when there does not need to be.

If there is a saving grace, the brakes are simply fantastic – as I expected from a Mazda. 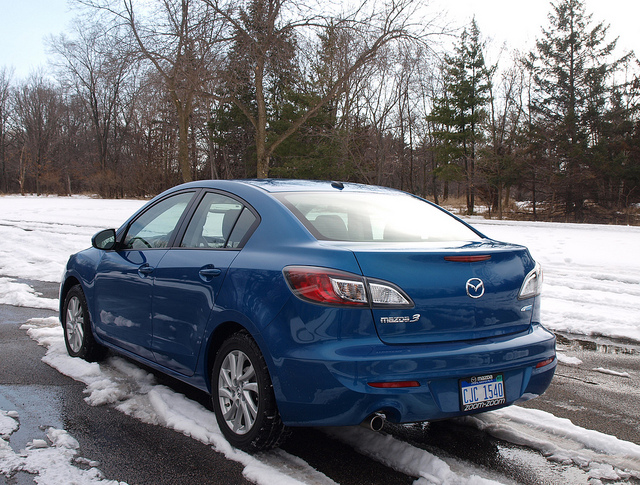 Another saving grace was the fuel consumption. Mazda advertises that the Skyactiv would get up to 40MPG on the highway. Normally, I would get somewhere in the neighborhood of 25MPG with an MZR-powered Mazda3 or 6. In my turn with the Skyactiv Mazda3, I got 30.3MPG overall.

Though you get better fuel economy with the Skyactiv, there is a premium put upon choosing this engine instead one with the 2.0litre MZR engine. Understanding that in order to create an economy model, there may be some sacrifices one would make to do so. Prices begin at just $15,200 for a basic Mazda3 i SV 4-door with the MZR 2.0litre engine. Once you decided to go with the Skyactiv engine, the sticker jumps to $18,700. For the Grand Touring model, as tested, the bottom line came to almost $25,000. The Grand Touring model is also available with the larger 2.5litre MZR engine with a 6-speed manual or 5-speed automatic starting at $400 more than the Skyactiv.

The effort made several paragraphs prior explaining the Skyactiv technology certainly gives you a technical explanation. The only way to understand it is to drive it. I also suggest driving one of the MZR engine models – either the 2.0litre or 2.5litre versions. Then, think through the differences between the two before committing to your Mazda3.

In essence, Mazda owners and enthusiasts may appreciate the Skyactiv technology. It may not satisfy the hardcore enthusiast – the ones with “Zoom-Zoom” in their blood. That is reserved for the models with the MZR under the hood. However, for those of us who are trying to stretch our budget against the rise in pump prices – the Skyactiv is worth a try.