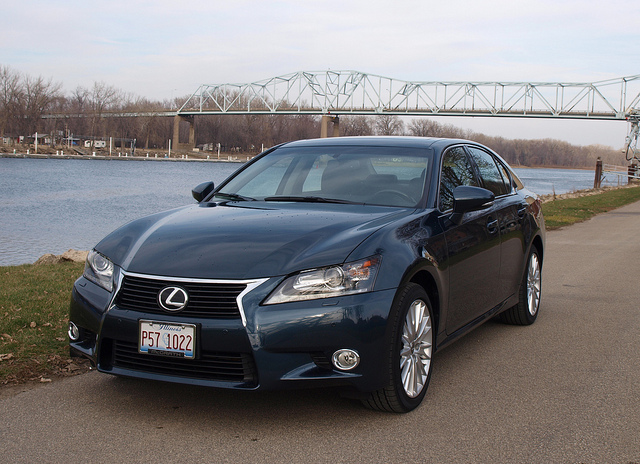 How do you succeed in a recovering economy?

If you are at a comfortable income range and have survived several mergers, acquisitions, and rounds of layoffs, you might be considered a success. One might even call you a survivor. You may be entrenched in middle-to-upper management, a top salesperson, or a high-ranking official in some public or non-profit sector role.

No matter where you are in that stratum, congratulations. You almost made it. Now, reward yourself, if you have not done so already.

It is easy to reward oneself when it comes down to premium automobiles. They announce your arrival with enough flash and style to turn everyone’s head as you roll along Hennepin, Grand, Excelsior, or Lexington.

The providers of these automobiles know this all too well. Last year, BMW and Mercedes-Benz sold a combined 450,000-plus automobiles, with the nod to BMW as the best-selling premium brand in the U.S.A. Being the top dog amongst luxury brands carries quite a weight as being a stylemaker, an influencer, or just an object of one’s desire.

Lexus used to be the top-selling luxury brand in America. Several quality and safety issues affecting its parent company, Toyota, along with a lineup of pretty uninspired vehicles, prevented the Oval-L to remain on top after the global financial crisis hit our shores. A perfect storm of issues for what are essentially pretty good vehicles.

The question was asked–perhaps for the umpteenth time since before its debut in 1989–how could Lexus outdo its German rivals? How does a luxury brand come back in its most critical market? What kind of style and panache would Lexus need to exude to match and outdo the Germans?

At the 2011 Pebble Beach Concours d’Elegance, Lexus answered by debuting its most critical model in its lineup: the new GS. 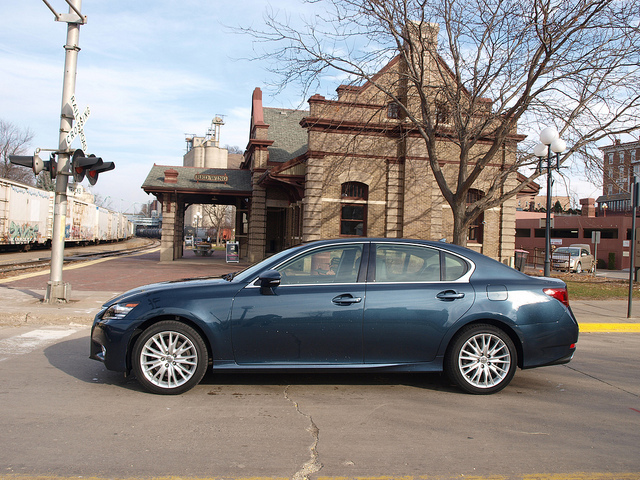 The GS had been in the Lexus lineup dating back to the early 1990s as their rear-wheel-drive mid-sized luxury sports sedan entry. As athletic as its moves, styling was never its strongest point. Interior room had always been tighter than its rivals; namely the BMW 5-Series, Mercedes-Benz E-Class, and Audi A6. For the new model, Lexus went back to the drawing board to not only make it better looking, but a better package overall.

Lexus may have succeeded this time around.

It starts with a new look for the brand, the “spindle grille.” The evolution of the new look came from not only several concepts that toured the auto show circuit for the last several years, but from hints first seen on the hybrid CT hatchback and the LFA supercar. The result is a starting point that dictates where the GS is going in terms of combining the sports and luxury aspects of the car.

Thanks to the spindle grille, Lexus finally has a distinctive look for today’s discriminating consumer.

The aggressiveness of the spindle grille continues the GS’s theme with its solid side profile leading to a nicely finished rear end. Compared to previous generations of the GS, this one looks the part it was originally intended without having to resort to resembling its rivals. The best way to describe the new GS is a synergy of elegance and muscle-bound brawn. 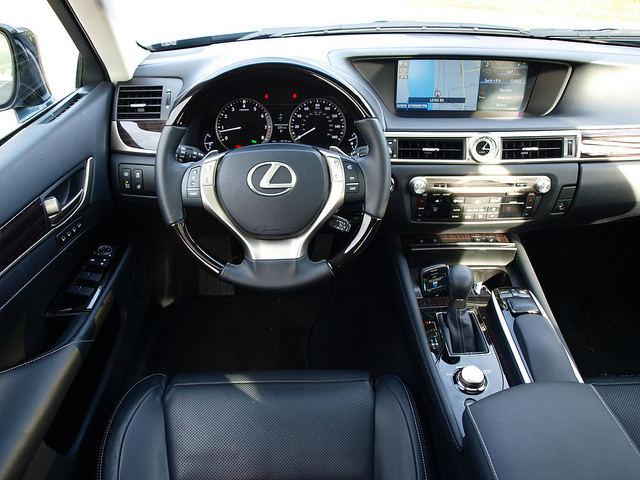 As much as the exterior is a complete step forward, the interior of the GS will blow your mind. Your eyes are immediately fixated on the large 12.3-inch center screen. This is where the infotainment and telematics systems reside, including Lexus Enform. The wide screen also houses readout and specific controls for the climate system and other vehicle functions. You access all of these functions through the Remote Touch controller on the center console next to the gear lever. This mouse-like controller has been enhanced for the GS as the swivel also functions at the click button.

Everything else is typical Lexus: wonderful displays, soft touch materials, great switches, knobs, and buttons, and a smaller-diameter steering wheel. The latter is a recent development for newer Lexus models, though it may seem complicated to understand for anyone outside of the brand. Once you get the hang of the Remote Touch controller and the plethora of buttons, knobs, and switches throughout the GS, you would come appreciate how well Lexus truly crafted this mid-sized premium sports sedan for the driver.

The driver’s seat is an absolute treat. Not only do you get the normal power adjustments for rake, recline, and height, you also get power adjustments for the upper and lower lumbar supports, the bolsters, and the front thigh support. The driver can choose to be comfortable or simply supportive. Sporty black perforated leather is lavished on the GS seats for four normal-sized adults. Trunk space is decent, but it would take some creative packing with the wheel wells protruding onto the oddly shaped cargo hold.

The idea behind the GS is to offer more than ever before. This is true for the audio system that goes along with the Luxury package. Twelve speakers dot throughout the cabin channeling everything from HD Radio, SiriusXM satellite radio, and the tunes on your Bluetooth-connected mobile device. You can always utilize the USB connection inside the center console for your devices as well. 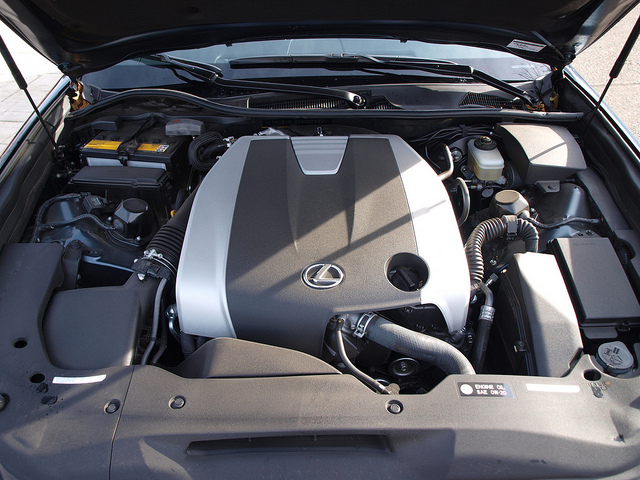 The sound that came from the audio system was equally rivaled by the sound coming from the integrated twin exhaust ports at the rear bumper. There is a distinctive rumble and burble that would come from a sports-tuned 3.5litre V6 engine, a staple of the Lexus lineup (and other Toyota products). With 306 horsepower on tap, the GS is capable of going from 0-to-60MPH on 5.7 seconds. Needless to say, the V6 feels like you can actually do that. It is quick and responsive to the throttle. It bears repeating how lovely the soundtrack from the V6 is when you step on the accelerator.

Unlike its rivals, the GS relies on a six-speed automatic gearbox to control the V6’s power band. Six ratios are all you need, really, because this transmission actually works as intended. You can choose to switch gears yourself at the shifter or with paddles on the steering wheel. Or, you can simple leave it in Drive and still feel the power as it goes through the gears. This tester came with all-wheel drive–-a must in our parts since the standard driveline is through the rear wheels.

There is a trick to this powerful machine. On the center console is the Drive Mode Select knob. It works to whatever mood you wish to be in while behind the wheel of the GS. It starts off in Normal, which is a combination of all good things the GS offers. If you want to leisurely go about your way, the Eco mode eases a lot of the vehicle’s settings–including the climate control-to save fuel along the way. Flip the knob to the right, and you are in Sport S mode. Sport S enables the engine to breathe deeper and change the algorithms of the transmission for quicker shifts.

Flip the knob to the right one more time, and you are in Sport S+ mode. This setting tightens up the suspension, the steering response, and the gear changes. The result is a well-tuned, well-oiled machine that is fun to throw in a curve. The interesting part to Sport S+ mode was minimal fuel economy loss while the driving dynamics settings are at their tightest.

In any mode, the GS still combines the best of all worlds. The suspension was already reworked to minimize roll and keep the car stable through the curves. Only Sport S+ maximizes suspension feel and keeps body roll near zero. Normally, when you stiffen the suspension, you lose ride quality and comfort. The GS is very consistent in every mode, keeping the overall ride stable and comfortable. You do feel some road imperfections even in Eco mode, but not enough to send shockwaves through the cabin.

In all other modes, I found the steering to be a bit soft in feel, though turning reaction is quite good. There is some play in Eco mode at the wheel. Sport S+ resolves this issue providing a tighter and sharper feel at every turn. Braking is quite good with balanced response in every mode. Panic stops are to the point without drama from the system and the pedal. 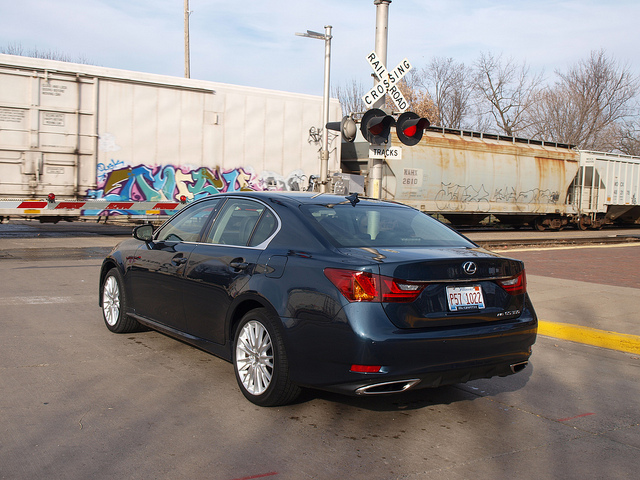 One does not expect great fuel economy out of a premium mid-sized sports sedan with over 300 horsepower. You may even consider that it would be relative to its competition. That was exactly what the GS yielded, averaging 21.1MPG. If you are concerned about fuel economy and like the GS, it does come in a Hybrid edition, the GS 450h, which takes the 3.5litre V6 and tacks on the Lexus Synergy Drive motor onto it.

The price of admission is what you would expect from a comprehensively equipped car in its class. The base price of the GS is $47,795 with just rear-wheel drive and no packages. The Luxury Package on this AWD tester sent the sticker price upwards to $60,990.

The GS simply returns Lexus back into the thick of the premium automobile wars. The result has been an increase in sales for Toyota’s luxury brand–a good thing if you are not a fan of the class-leading Germans. As an offshoot of the GS, the new Lexus spindle grille has made its way onto four new or revised models this model year alone: The ES sedan, the RX crossover, the LX large SUV, and the flagship LS sedan. Last month in Detroit, the 2014 IS sports sedan was introduced with a more aggressive and radical interpretation of the spindle front end.

However, the spindle grille, a new body and interior, along with improved driving dynamics, may find some premium mid-sized sedan buyers a bit puzzled. Perhaps, they would find the Lexus as complicated as the Mercedes-Benz E-Class, BMW 5-Series, Audi A6, or Infiniti M? Maybe it is a bit too gadget-laden or too polarizing a design when compared to the standard bearers in its class?

For $61,000, this Lexus may be the alternative to the Germans in this stratosphere. Come to think of it, if you do not mind the gadgetry and geekery of the Lexus, this is a good one to get. Perhaps this Lexus will be your hedge through economy recovery.