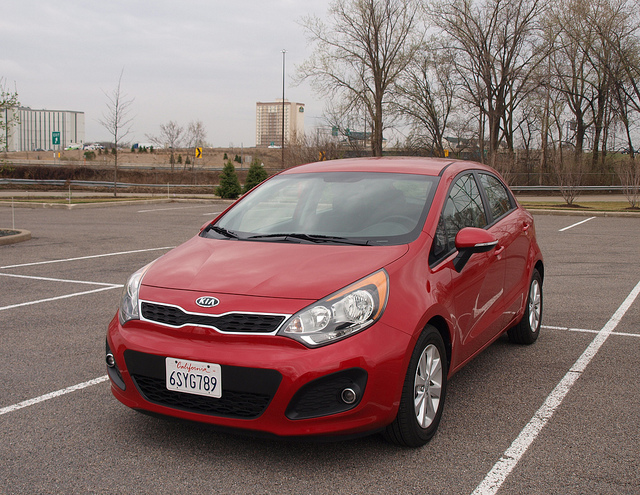 This is one of the scenarios being bantered about by oil speculators since before the end of 2011. These speculators forecasted the rise of fuel pump prices to top the $5.00 mark for unleaded nationwide by the peak summer driving season. For a lot of motorists, this is not going to be fun.

When fuel pump prices hit $4.00-a-gallon last year, the automobile industry did not prepare for the run on compact cars and small crossovers. Products, such as the Hyundai Elantra, Ford Focus and Toyota Corolla, experienced huge sales increases over previous years. The Chevrolet Cruze enjoyed being the best selling passenger car in the U.S. for a couple of months during the middle of 2011. When fuel prices climbed down off of the $4.00 level, larger cars supplanted compacts again to wrap up a year of growth in the automotive industry.

If fuel jumps up to the $5.00 level this summer, how will you react when you have to buy a new vehicle? Will you downsize even more?

If you do, you may want to look at the Kia Rio.

Prior to this latest iteration of Kia’s subcompact car, the Rio has not had a good image. To be honest, the original package of a somewhat adequate 1.5litre engine and a rather decent level of equipment were simply not enough to battle the titans of the subcompact segment. Until recently, the “big two” in the small car field were the Toyota Yaris and Honda Fit. The Rio sold decently, but not enough to be considered a serious contender.

In its third iteration, Kia went back to the drawing board. Not only did Kia position the Rio for potential growth in North America, it wanted a world-class competitor for every market it showed up in.

It certainly looks global. The Rio’s five-door hatchback would feel right at home in Uptown Minneapolis or along Grand Avenue, as it does in Madrid, Cape Town, Buenos Aires, Melbourne, or Seoul. As handsome as it is, the Rio is also quite brawny. The front end incorporates the brand’s signature gap-tooth grille with large headlamp clusters and a secure looking bumper. The rear end looks neat, with a very functional hatch that provides access to a sizeable and expandable cargo hold. 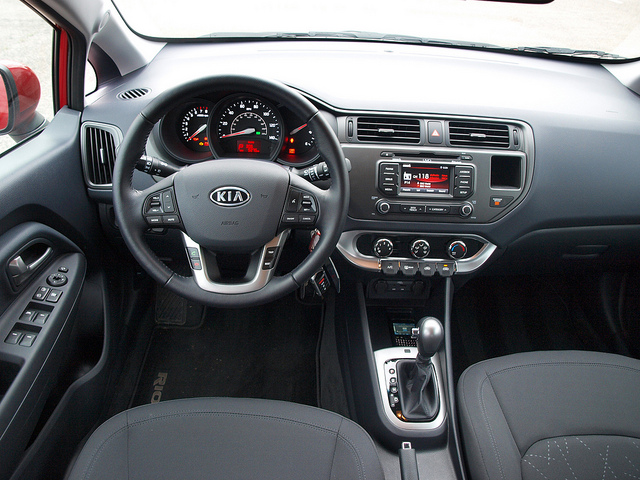 Inside, the EX trim provides a comfortable and supportive set of cloth covered seats. Any driver would be comfortable behind the wheel with enough manual adjustments from seat height and recline to steering wheel rake and distance. Rear room may not fit everyone’s legs, but the headroom is fantastic for tall torsos. It would depend on the size of people you intend to carry around you, though. Kia certainly put in a lot of thought into the cabin of the Rio – especially in terms of space and comfort.

Instrumentation is straightforward with a large speedometer, with the tachometer and fuel gauge off to each side and a center screen for all trip-related functions. Switches have a nice touch to them from turn signal stalks to HVAC controls. The steering wheel is full of nicely tactile and essential redundant switches making the job of driving easier to manage.

Perhaps the biggest surprise inside the Rio was its infotainment system. It is not because of the sound quality from its six speakers that rival brand named upscale models. Nor is it because of the cool full smart phone-like LCD readout that includes a screen for the reversing camera. It is not the Bluetooth connectivity for your phone, either. It is because this car came with UVO – Kia’s version of Microsoft’s voice-activated infotainment suite that provides connectivity with every device imaginable. Before anyone asks whether it works exactly like Ford’s SYNC system (also developed by Microsoft), it is probably better to have everything set up before you try it out. There are plenty of redundant switches in the steering wheel that provides enough usability for the driver to control necessary functions on the road. 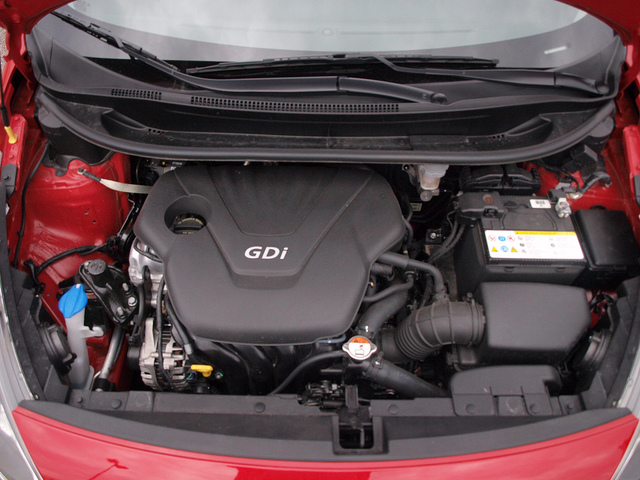 Under the Rio’s hood is a high performance 1.6litre dual overhead camshaft GDI four-cylinder with the requisite four-valves per cylinder, direct fuel injection system and variable valve timing. With 138 horsepower to play with, the Rio simply loves to go. Getting there might be a struggle, especially when you get onto a highway. After a bit of lag, the Rio’s GDI engine maintains highway speed quite well for a little car. Connected to the motor is a six-speed automatic gearbox that funnels this wellspring of power through the front wheels.

On the road, you will find out why I refer to the Rio as “spunky.” While the engine helps gobble up the miles, you are entertained by its supple ride. Though it glides along smooth surfaces, the Rio manages road imperfections competently with minimal feedback. The ride is enhanced with an eager suspension set-up that allows for road hugging and competent handling in evasive maneuvers. The steering feedback and feel is very sharp and exact. Stopping power is very good for its class – a compliment, indeed!

Along the way, you find some road noise feedback in the cabin, especially at full throttle. A bit more sound deadening would do nicely here. While the Rio tracks well, there are a bit of roll on the curves. Not much to cause an alarm, mind you. Overall, the Rio is a sharp performer – a “darty” and “swift” little car that can handle just about anything the world throws at it.

Bring “spunky,” “darty” and “swift” has some advantages. However, one buys a subcompact to gain a hedge on fuel efficiency. The Rio did not disappoint. Overall, the Rio averaged 31.3MPG, while it gained a high of 36MPG on the freeway. Kia states the Rio would be able to get 40MPG on the highway. It just might be able to do exactly that.

In the past, the Rio was very affordable – starting somewhere around $11,000. This is a new model – a much improved all around subcompact. The basic LX five-door model with a 6-speed manual starts at $14,350. You can get a four-door version for $200 less, if you want a bit more room and a trunk instead of a hatchback. However, the EX tester with the Convenience Package ran the sticker up to $18,345. Compared to the competition, if you consider what you get in the Rio compared to the subcompact of your choice – you will find that it is right for the money. 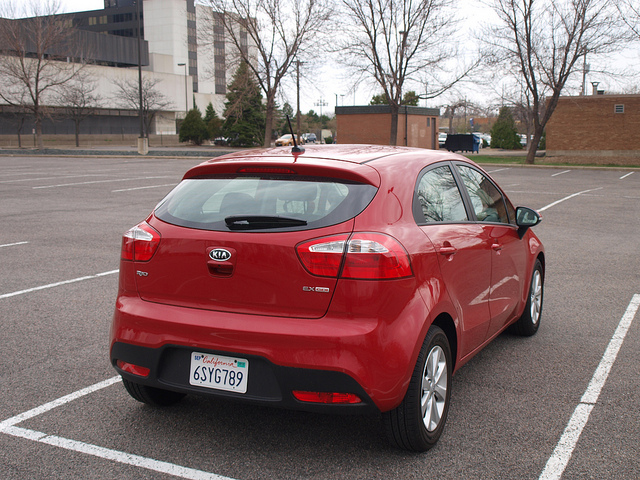 The thing about the Rio is not how much it will cost you to buy, but to run. Or, rather, whether it works within your lifestyle. Subcompacts work in various different environments these days, ranging from urban in-town runabout duty to long distance commuter runs. As the bar continues to be raised in this segment, there will be certain models that simply stand out.

However, every brand that sells a subcompact in this country has stepped up their game. It makes selecting the right one pretty difficult. Once you do the comparison, you may find the Kia Rio towards the top of your list – if not on the very top.

This is a testament of what Kia has been doing all along – improving their products for a truly global marketplace. The job Kia did on the newest Rio is a marked improvement over two previous iterations of their subcompact offering. Perhaps this is your hedge against the price of gas this year.