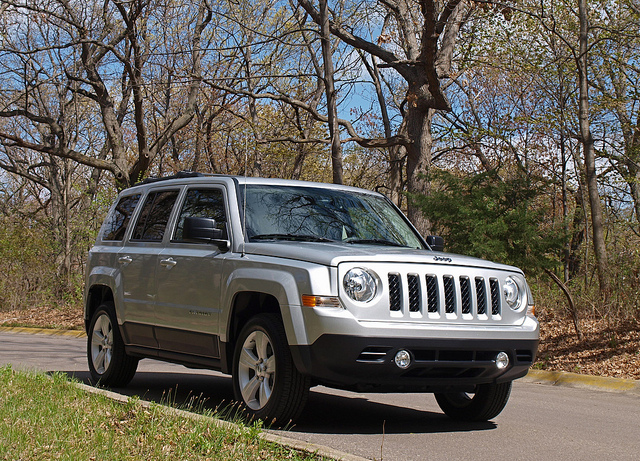 We think we know what this brand is all about. We certainly know where it came from and how it garners a high level of loyalty from its owners–especially those who fully utilize the capabilities of their steeds.

Part of that loyalty comes from a bit of a spur in history–our history. In Randy Shilts’ The Mayor of Castro Street, the biography of the late San Francisco politico Harvey Milk, a section of the book painted a picture of the Castro as the center of all GLBT liberation. In one paragraph, Shilts described how newly arrived denizens of the Castro took the neighborhood by storm–in a flotilla of Jeeps.

Sure, I’m embellishing the story a tad, but it was true. In the 1970s, to be gay or lesbian in San Francisco was to embody an air of some level of masculinity. Only a few vehicles met this image perfectly at that time–namely the Jeep CJ-5. On a sunny day, the top and the doors were removed, and the sounds of disco music wafted out of the stereo onto the streets of the Castro. When you owned a Jeep CJ-5, you owned the Castro…or, at least you felt that way for the moment.

In case our memory banks have not served us well, the CJ-5 begat the CJ-7…which begat the Wrangler. Meanwhile, Willys-Overland, one of the two originators of the World War II-winning instrument of military flexibility and the post-war keeper of the grail, sold Jeep to the Kaiser Corporation in 1954, then to American Motors in 1970, and it has been part of Chrysler’s portfolio since 1987. For something that won a World War, it has gone through a series of metamorphoses without diluting its core task–to drive anywhere without fail. This is where Jeep won its followers since the end of World War II.

From the 1970s, our community’s loyalty to the Jeep brand runs as deep as anyone’s. Who do you know in your circle of friends and family that owns a Jeep? It doesn’t have to be a Wrangler, per se, but you can see every kind of Jeep built amongst our people.

Though some Jeeps are more equal than others, the Patriot may seem less so. Combined on the same platform as the Compass and the now-extinct Dodge Caliber, the Patriot was seen as a small Jeep with some Trail Rated credibility. A measure of a Jeep is whether it earns the Trail Rated badge–an indicator to the consumer that it can go off the tarmac to wherever you want it to go.

After several years in the market, the Patriot remains in the lineup despite being scheduled for replacement by the combined powers-to-be between Fiat and Chrysler based on the Five-Year plan of 2009. While it is still with us, the Patriot provides a quandary for Jeep aficionados and small SUV/crossover consumers as to whether this is Jeep enough for everyone–including the brand’s loyal consumers.

The Patriot starts with a familiar look. From the front, it could be a doppelganger for the Wrangler–the seven-slot grille and prominent round headlights. Out in the back, the Patriot melds another Jeep icon onto its small frame–the 1984 Cherokee. By putting these two icons together, the Patriot becomes a visual representation honoring the brand’s past with a current mission in mind. Just like the old Cherokee, the roof height is lower compared to current small crossover/SUV offerings. A few nips and tucks were executed from the original a year or so ago, which makes the Patriot a bit more attractive than before.

The Latitude tester adds big 17-inch alloy rims, making the Patriot more aggressive whether it has 4WD or not. Firestone Affinity tires are not exactly made for rock-hopping, but they do give a sense of civility to the Patriot. The Latitude adds fog lamps up front and some subtle aerodynamics for better protection and airflow underneath. 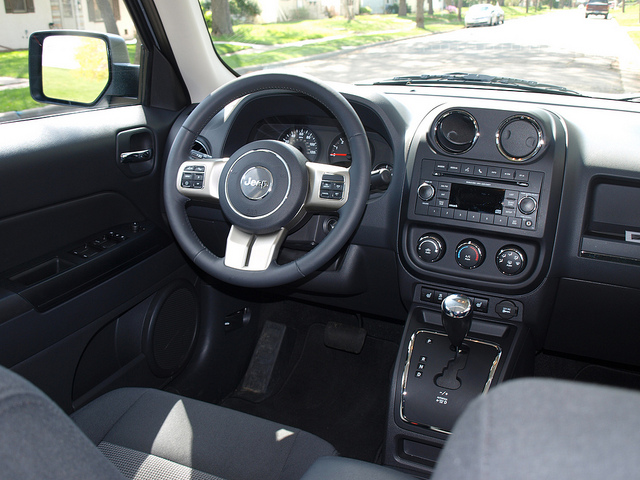 One peek inside, and you get what the Patriot is all about. In the Latitude model, it’s all business. You get a no-nonsense cabin for four adults and enough space in the cargo hold for a week at the cabin. Everything is straightforward from the instrumentation to the switches. To top it all off is the brand’s big steering wheel with plenty of functions available at your fingertips. Remember, the audio switches are on the back of the steering wheel–a unique Chrysler feature.

Up front, the seats are comfortable and supportive with plenty of bolstering to keep you in place through the curves or the rough stuff. If you find a nice upright position, you can command your Patriot without compromising your body. Rear seat passengers are treated to deep foot wells with plenty of space underneath the front seats. Seat backs recline for second-row passengers. Though there is plenty of headroom, legroom may depend on the size of the adult sitting in back. Since there are cup holders in the middle of the rear floor, a third rear seat passenger may be out of the question for long journeys.

This Latitude tester did not come with a whole host of luxuries, such as a navigation system, a sunroof, or other extras we love to play with. Instead, Chrysler’s standard audio set-up is more than adequate for the journey ahead. Along with AM, FM, and Sirius satellite radio, a single CD player is one option to enjoy your favorite sound through the Patriot’s four speakers. Your MP3 player gets an auxiliary jack in case you have some tunes you want to bring along for the trip. UConnect bridges your Bluetooth-enabled phone, becoming another piece of the audio suite that includes both phone and streaming audio from your music files. Simply put, everything works together very well.

If you think that the cargo space in the Patriot is simply adequate, try folding down the second row. You can still carry plenty of things totaling 54.2 cubic feet of usable space. Once you fold down the front passenger seatback, there is a total of 62.7 cubic feet to play with for skis or that tall lamp you found at the thrift store. 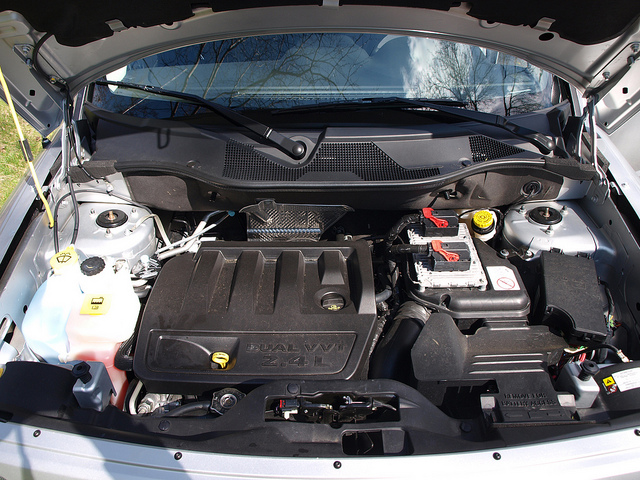 Powering this small SUV is a 2.4-litre dual overhead camshaft four-cylinder engine. This capable motor comes with the requisite four-valves per cylinder and variable valve timing as you get with all modern engines these days–good for 172 horsepower. That’s plenty of power when you only have less than 3,400 pounds to play with. The lighter weight and the willing engine make a fine combination when it is in motion, gobbling up the miles. The engine can get a bit noisy at lower ratios when the throttle is pressed. Once it settles into the groove, it is a very quiet SUV.

A continuously variable transmission sends power to Jeep’s standard four-wheel drive set-up. There were a few issues with the CVT, such as moments of slow response to the throttle when entering onto the highway and while cruising when the CVT selects a ratio powering the engine at a higher RPM than normal. However, there is a solution to this problem–the Autostick. If you toggle the gear lever from side-to-side, the CVT responds with the correct ratio at the right speed. Sounds like a manual gearbox to me…

Being a quiet little Jeep has its advantages. Ride quality is solid on all surfaces; not a lot of crossovers and SUVs can say that. Whether it is a smooth piece of tarmac, a street full of potholes, or a gravel rural road, the Patriot soaks it all in without complaint. Even on gravel, the Patriot is still a quiet rider.

One surprise that was welcomed was the steering action from such a big wheel. The response is sharp and exacting, though a slightly smaller steering wheel would help matters a tad. Brakes are quite decent as the action is a bit sharper than most crossovers and SUVs driven lately.

On-road handling is quite soft, however. There is plenty of lean and roll in the corners but with very little noise and feedback on the curves. Granted, no one buys a Jeep to carve up canyon roads, but there is plenty of solidity in the way the Patriot drives to make up for these few complaints.

For a small crossover/SUV to warrant the attention of gas pump price-conscious consumers, fuel economy has to be within reasonable limits. The Patriot achieved a fuel consumption figure of 20.2MPG. You can get better fuel economy in a Patriot as the EPA rates it at 21-26MPG. 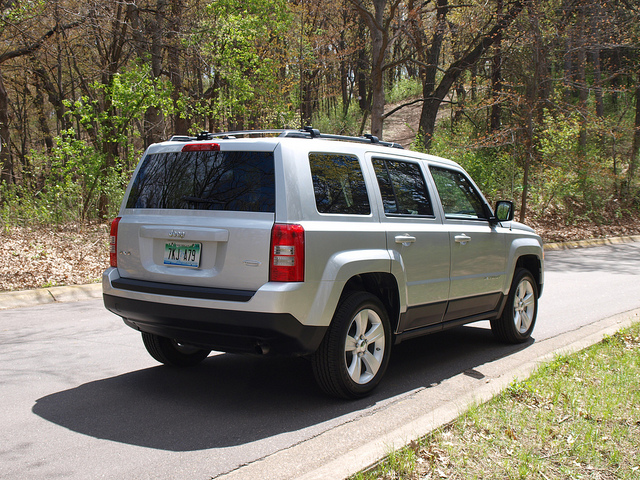 Another important piece of the puzzle in this market place is the price one pays for such capability–especially in a Jeep. For this Latitude tester, the sticker came to only $24,685. You get plenty of conveniences for the money, but what if you wanted a Patriot with off-roading skills and an in-dash Garmin navigation? You can get the Freedom Drive II package with off-road capabilities on the Latitude for almost $600-700 more, but not with the navigation. To get everything you want for outright adventure, you have to upgrade to the Patriot Limited. With the Freedom Drive II package and navigation on the Limited starting at $26,445, you may end up with the bargain of the class.

The Patriot offers plenty of value with the right look and ambition. It is also quite the small SUV with a lot to offer, when equipped properly. Of course, it’s not perfect. No vehicle can be exactly what you want, but it is a good choice for those of us on a budget looking to get into the ground level of Jeep.

Is this the right Jeep for us? Good question. As GLBT people, we are loyal to the brands that have supported us and our lifestyles over the years. We expect them to deliver the goods for us when something new comes out. Therefore, we expect a lot from Jeep. These tough Trail Rated yet civilized machines are a huge part of our heritage.

The Patriot is right for some of the places we might live in. The price point is very good for most of our wallets. It carries up to four of us at a time. And, there are quite a number of us who already own this small wonder. Sounds like a good choice, doesn’t it?

It is a Jeep, after all.