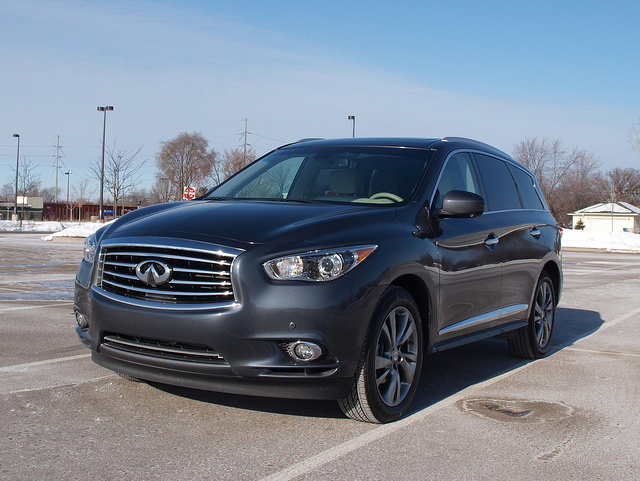 At what point do we consider a crossover or SUV considered “too much?”

It would depend on what we use it for. If we have a family we haul around, a three-row crossover would be the answer. It should have enough room to carry two rows of adults with room for children in the third row. If we drop the rear-most seat, there should be more than enough room for luggage on a week’s vacation for four.

What if we wanted something luxurious? Our choices narrow down to a choice few. Mercedes-Benz claims they own the segment with its massive GL, but the Audi Q7 offers the counterpoint of being the original. You would also include the Lincoln MKT, the Acura MDX and the Buick Enclave in the mix. Though volumes are not as huge as its lower priced competitors, those of us who are looking for a three-row crossover/SUV with an eye for luxury have a real choice without climbing on board something supersized and expensive such as the Cadillac Escalade or the Infiniti QX56.

There is a new choice in this segment worth considering – the Infiniti JX35.

Actually, the JX is more of a mid-sized crossover that feels large. In-between is a sculptured profile with shapes and textures that signify Infiniti’s design tenets. The large grille announces the JX’s arrival anywhere, but flanked with some small-ish headlamps. The rest of the profile continues in the usual manner with large doors and accessible liftgate.

The key attraction to the JX is the swath of glass framed by a chrome crown. The D pillar features a curving sweep that scales back to the rear – the JX’s signature. Though this model wore twenty-inch medium gray satin finished wheels, the medium profile Bridgestone Dueler tires finish off the look by balancing the JX’s overall look between aggressive, poised and elegant.

Infiniti has always crafted automobiles with an emphasis on elegance. The interior continues this theme with the same amount of round shapes wherever you look and touch. There is a bit of purple tint in the instrumentation when lit denoting the brand’s official color. Included in the instrumentation binnacle is the Intelligent-View display giving a clear picture of what is going on with the JX at all times.

On top of the center stack is a big screen, that house in the infotainment suite – including a very good navigation system. There are some issues with some switches as they range from fiddly to solid. Other switches are shared with other Nissan models, some of which are merely OK for an Infiniti. For the most part, interior quality is high with fine textures and finishes.

The driver and front passenger are treated to a pair of thrones. These seats are not only big, but they are very comfortable. There is enough bolstering and cushion to keep the driver locked behind the wheel. Second row passengers are treated to three-across seating with a lack of a center hump. Not only the split second row seats recline, they are also adjustable for rake. In this example, the second row passengers have two screens on the back of the front seat headrests to watch their favorite video programming – all part of the Theater Package with wireless headphones and other accompaniments.

Considering this is a three-row crossover, there are concerns about using the back row. There are really two positions for the third row – either one for children with the second row moved towards the front or just simply folded away. If you are considering seating seven adults, this may not be a comfortable alternative. In my case, I folded the rear seat and moved the second row to its furthest back position. That way, adult room is accomplished.

Sound is channeled through a Bose’s Cabin Surround sound system. You get AM, FM and SiriusXM radio along with Bluetooth connectivity with your phone and the remaining components to the video screens for the second row passengers as part of the Theater Package. The flip side of the Bluetooth connection is with music files where there was inconsistency in control, readout and playback. Otherwise, sound quality through the 13 Bose speakers was simply great. 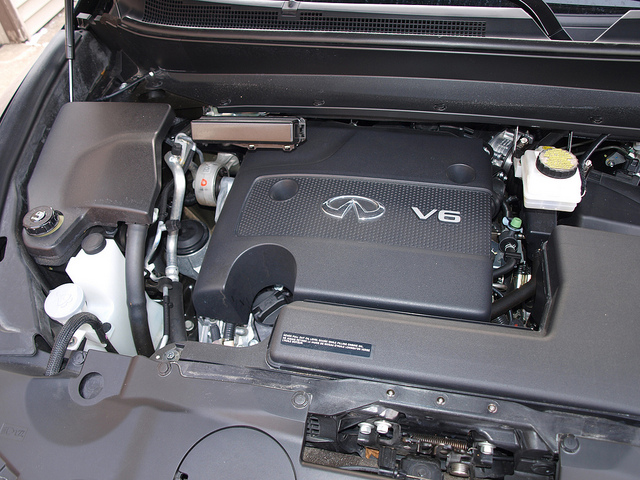 Under the hood is one of the best engines in the world: Nissan’s VQ35. The 3.5litre V6 puts out 265 horsepower with 248 pounds-feet of torque. It is the right engine for the JX as it never felt taxed since this three-row crossover only weighed just over 4,400 pounds. The VQ35 is connected to a continuously variable transmission with power going to all four wheels. Unlike most CVTs, this one did a great job keeping ratios right at the correct revs and responding to the throttle for needed acceleration.

The all-wheel drive system worked very well, especially in Snow mode. There are other settings on the Drive Mode Selector knob in the middle of the center console where you can shift conditions on the fly. Eco mode softens up the vehicle to induce better efficiency, while Sport simply opens up the throttle and keeps the suspension in check through brisk driving moments. Normal mode combines the best of both extremes. For the most part, the JX switched between Snow and Eco modes in-between finding better grip and traction and keeping the crossover moving on drier surfaces.

In driving the JX, one has to remember that it is mid-sized, despite the “huge” feeling from the driver’s seat. In this case, “huge” means “solid” and “nimble” – at the same time. To explain, there is a perception of the JX being wide and long. Yet, when you drive it, it actually feels smaller than it is perceived. The ride is solid and absorbent, to begin with. It is also nimble in traffic. Handling is on the soft side, but with minimal roll and lean. Road imperfections are handled well with minimal shock to the cabin.

The steering system on the JX was surprisingly superb. Turns were tighter for a vehicle of its size. Reaction was quick, though a bit loose in feel. When you switch the JX into Snow mode, the steering becomes more weighted to handle maneuvers on caked and iced surfaces. Braking was strong and direct in both normal and panic stops.

To augment the driving experience is a suite of active safety features designed to keep you in line on the road. When you back out, the center screen shows you not only what is behind you, but around you. The Around-View monitor shows you overhead shots of every side of your vehicle when you back out. There is a monitor that senses anything approaching form behind. On the sides of the A-pillar are Blind Spot Warning monitors that work silently – only emitting a yellow light when something is in your zone. 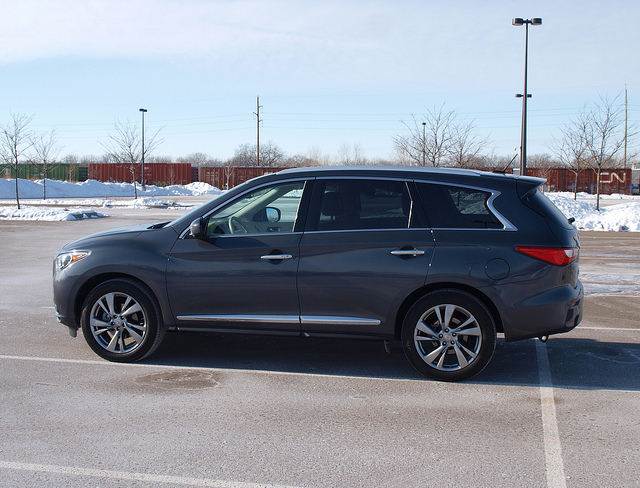 The Infiniti approach to active safety is quite tremendous – and, frankly, not entirely annoying to the driver.

One concern on the JX was fuel economy. You would expect a poor consumption loop in such a big vehicle. Surprisingly, it averaged 18.8MPG – right on target with its competition. According to the owner’s manual, fueling with Premium is recommended for better performance.

When it comes to value, the JX also is positioned right competitively amongst luxury three-row crossovers. Starting price for a front-wheel drive model is $40,650. All-wheel drive models begin at $42,050. However, this fully equipped model with practically every package available rang up the bill to $56,005.

Infiniti has always dared to be different in the marketplace. Signature shapes and levels of luxury are unmatched in a marketplace where distinctiveness is a calling card. The JX delivers on the brand’s want to expand into common markets where the competition established the ground rules of engagement. Where the JX stands out is in the way it exudes a premium feel in an accessible package.

Luxury alone is not how one shops for a three-row crossover/SUV. There are less expensive models that do a better job seating seven people – adults and children alike. Some might say that a two-row luxury crossover works better if you only carry up to five people. If you like the idea of flexible seating and really do not mind about passenger space, but want a great driveline, a swath of creamy luxury and some artistic shapes to roll in, the JX is definitely worth considering.

But, is it all “too much?” It depends on whether you really want it all.