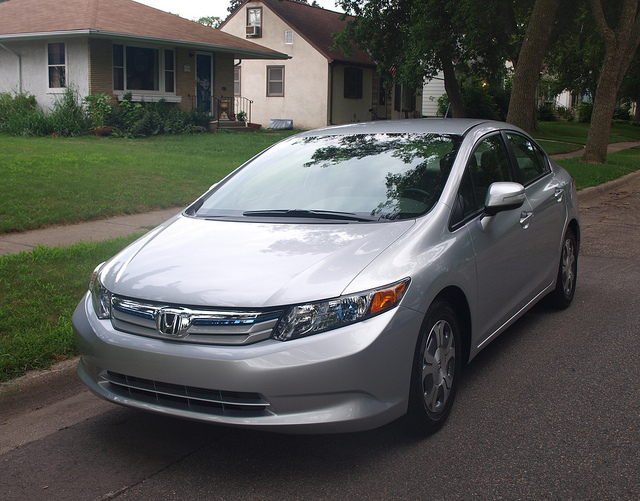 The word “hybrid” has been applied to one car – the Toyota Prius. The two are synonymous with each other. The idea of slapping an electric motor next to an internal combustion one will be forever linked to a large angular hatchback sedan with no noise and minimal exhaust emissions.

Does that mean that any other hybrid on the road will be measured by the Prius? Just because the primary patent is owned by Toyota, the motoring public will have to kowtow to the Prius for validation that their hybrid is worthy of its green credentials.

It does not have to be this way. There are three different types of hybrid drivelines out in the marketplace made by nine different manufacturers (not counting “extended range electric vehicles”). The consumer can choose from a slew of products promising high fuel economy, the use of electrical current at low speeds and lower emissions.

While we were enamored by the iconic Prius, it seems that we may have forgotten about Honda.

Let me refresh your memory: At the same time the first generation Prius arrived on dealer lots, Honda introduced their Integrated Motor Assist system in the first Insights. Granted, they looked rather odd for being a two-seat commuter hatchback, Honda applied its smartest technology into the IMA system. The result is a launching pad for several products for Honda – including now three generations of the Civic.

The latest edition of the Civic – in its ninth iteration – took quite a knock by the motoring press. We always expected innovation from Honda, such as double wishbone suspensions, advanced variable valve timing systems and various design features that delight the eye. Since 1972, we have been spoiled by Honda’s willingness to push the envelope of the automobile.

However, you – the consumer – do not care what the pundits think. You still go to your Honda dealer and buy them. Civics sell on an average of 20,000 units per month, which is quite good in today’s post-global financial crisis marketplace.

I ask this: Is there a real difference between what the consumer and the automotive journalist see in the current Honda Civic? Also, is the Civic Hybrid a good alternative to the Prius? 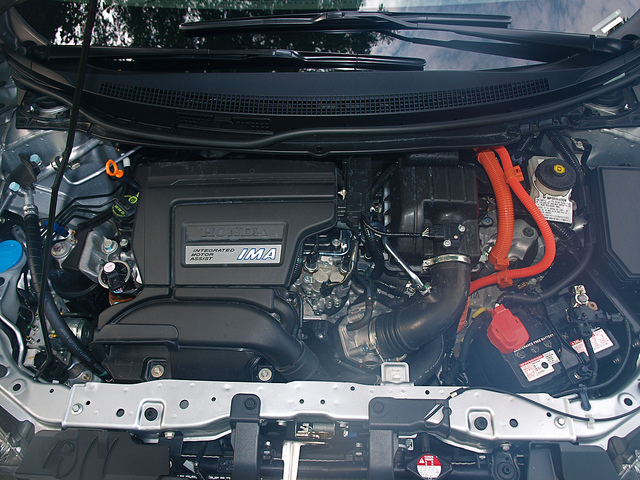 To explain how Honda’s IMA is compared to the other dominant hybrid system in the market – Toyota’s Hybrid Synergy Drive – it would require some technical explanation that would bore you to death. A simplified way to answer this is that both systems achieve the same result through somewhat similar methods. Both hybrid systems were proven for their reliability with long lasting battery packs and key hybrid systems. The only complaints about Honda’s systems that came up were its complexity compared to Toyota’s setup and not achieving fuel economy figures on the same level of similar Toyotas.

The truth about the IMA hybrid system is…it works! Combined with a stop-start system and regenerative braking, Honda’s IMA works just like any full hybrid in the market. Although you can sort-of hear and feel the system working, operation is quiet on the road. Often we put so much pressure on any other system next to Toyota’s Hybrid Synergy Drive that we forget that each system has its competencies that goes beyond explaining on the showroom floor.

As for the Civic itself, consider this argument: Evolutionary design could be a good thing. Where the detractors miss the point is how the Civic package improved over the previous generation. Though I appreciated how “different” the Civic wanted to be during its last generation, there were some details that were a bit detracting – in retrospect. Where the ninth generation Civic improved visually is really in the details. The grille area is easier on the eyes. The rear deck added some of Honda’s latest design tenets for a cleaner view. Sidelines were sharpened – including the roofline and glasshouse.

The Hybrid adds some further details to the new Civic. A shimmering aqua blue trim was added to the grille distinguishing the IMA motor underneath the hood. Even the alloy wheels were improved from previous generations with a compelling shape and larger openings for air control to and from the brakes. Regardless of model, the Civic is a low-slung sedan that is truly a standout in its class. The Hybrid is even more so. 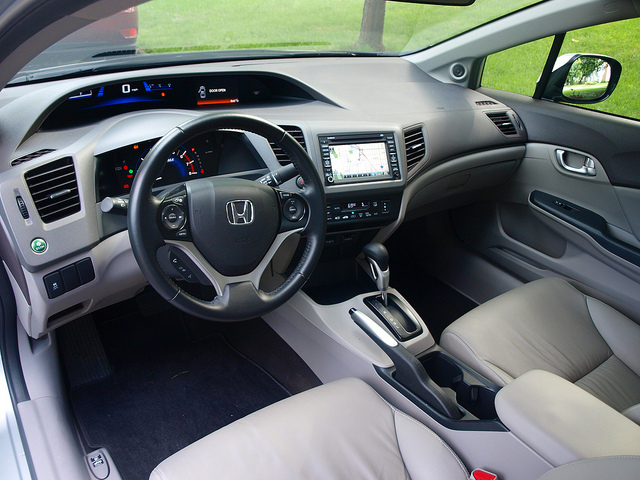 The evolutionary theme continued inside. The somewhat odd and curvy shape of the instrument panel in the last generation gave way to a cleaner, more logical fascia. The split instrumentation screens remain, but there was more thought put into the readouts. The Civic received the intelligent Multi Information Display integrated with the digital speedometer and fuel gauge onto the top level of the instrument panel. The Hybrid added a fuel economy meter and dual color indicator denoting the difference between “being green” and leathering the throttle. If you do the latter, those banks of green lights turn a beautiful hue of blue. In fact, they actually indicate the power flow between the engine, the IMA motor, the battery and your right foot. You could also see this in action on one of the screens in the i-MID system.

This Hybrid tester offered up plenty of surprises aside from the improved instrument panel. The optional leather seating was a huge surprise, elevating the Civic Hybrid to somewhere close to its cousin, the new 2013 Acura ILX. Front seats were right sized with plenty of comfort and some bolstering. The lumbar cushion jutted out a bit and lacked adjustment. Otherwise, manual adjustments took care of the rest of the driver’s seat. In an instance where I took friends to dinner in downtown Minneapolis, they remarked how roomy and comfortable the Civic back seats were. A word of caution, larger passengers might not feel the same way as most people occupying the rear cabin. Trunk space may look spacious due to that it does not expand, thanks to the lack of rear folding seats and the installation of the battery pack for the Hybrid. You can still put a weekend’s worth of bags for four in the trunk.

The Civic Hybrid offered up an optional navigation system in the tester. The system is integrated with voice recognition and an audio system that included Bluetooth connectivity. AM/FM and SiriusXM satellite radio was included with the navigation system upgrade as sound was fed through its six speakers. There is a USB and aux plug port for other portable devices to play your favorite tunes. 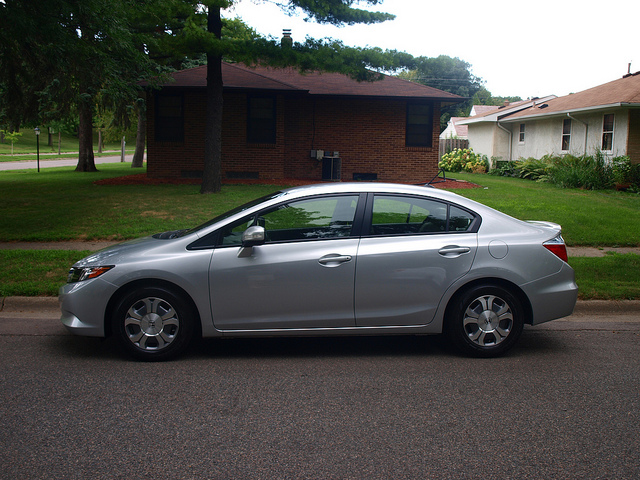 The 1.5litre i-VTEC/IMA combination has 110 horsepower and 127 pounds-feet of torque on tap to your right foot. Granted it was not blazing fast off of the mark, but it does the job when you need it. The difference is when you put the Civic Hyrbid out on the highway. As quiet as the combined motors are, it can still manage higher speeds with ease. It also did a great job managing 2,875 pounds worth of Hybrid Civic anywhere it was told to go.

The Civic’s stop-start system does something most systems do not – it turns off the engine before you make a complete stop. Most stop-start systems I have experience usually engaged after you complete the stop. In stop-and-go city traffic, most engine wear issues are usually prevalent during idle. By reading the potential stop, cutting the engine early nips the potential brief idle issue saves a few precious miles in its lifespan. Perhaps this was why I felt more at ease with this stop-start system over others driven in the past few years.

Also making its case for the Civic was the continuously variable transmission connected to the IMA system. It appeared to be more simplified – a wide ratio for acceleration and another one for cruising. Most CVTs think they were smart enough to engage at ratio at any speed. Not in the Civic. This transmission was brilliant in terms of where to put the ratio at a certain engine speed for the job it needed to do. Power was sent down to the front wheels in the Civic – as it always had since 1972.

Because it is a Hybrid does not mean it is less of a Civic. Civics were known for its low center of gravity, great handling and solid ride for a compact. The Hybrid did not disappoint. Regardless of suspension set-up, this Civic took corners flat with minimal roll or lean. Cornering might not have been sharp as one would like from a Civic, but you can still ease it into one without complaint. The Civic’s steering had a tight turning radius and reacted to situations decently. Wheel action offered no lag and corrected quickly. The ride was solid enough to absorb road imperfections to the best of its ability. Do not let the low-rolling resistance Bridgestones fool you – they provides a high degree of grip and a smoother ride overall.

Hybrid brakes usually offer up some disdain from the motoring public. Because the regenerative system is tied into Hybrid driveline, braking would be sort of an adventure – or a complete disappointment. The Civic Hybrid’s braking was neither. Certainly, there is that “hybrid feel” when stopping, but not enough to make a non-hybrid owner wince. Panic stops are sharper than what you expect from a hybrid – a good thing, indeed. 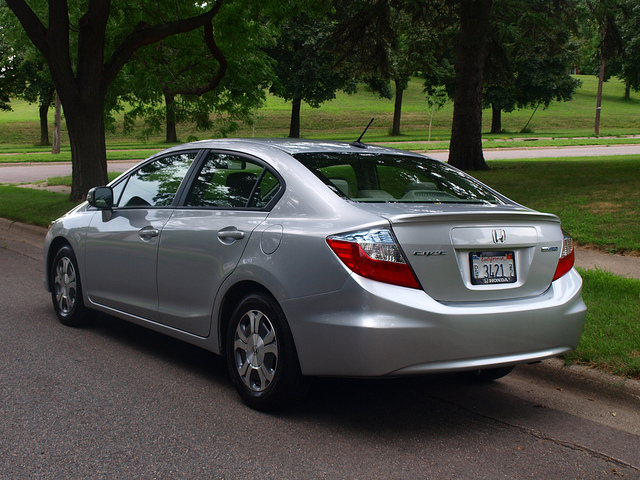 Because it is a hybrid, there is an expectation of outstanding fuel economy. How does 35MPG strike you? It is a number that speaks volumes in the compact class. While some competitors – the Civic Hyrbid included – tout 40MPG (or more) as the selling point, the mid-30s is a realistic mark of a truly efficient vehicle.

To buy the Civic Hybrid, you need about $25,000 for starters. Or, you could have everything that is on the tester for just $27,690. Frankly, the Hyrbid is great, but you can still have the fun of the Civic without the IMA system, adding a folding rear seat and a bit more spirit for much less – LX sedans run you $19,595. My choice is the EX with the navigation system for just under $23,000 – without leather, mind you.

Which brings me to this: Was it justified for about a vast majority of my fellow automotive scribes to knock the Civic for not being as cool as it was in 1988? Explain to the motoring press that the Civic still sells well in North America. Consumers do not always agree with us every time. They have enough power at the pocketbook than we have in becoming household names.

The Civic will always be the car for those of us who want to balance practicality with fun. It appeals to a broader public – including this generation.

This is why you picked the Civic as one of the ten vehicles associated with our community. It is called the “rainbow car” for a reason. We like them because they are attractive, inexpensive to run and highly dependable.

Add the Hyrbid to the mix, and you have a great alternative to every electric motor equipped vehicle on the planet. Then again, why make it an alternative choice? If the Prius is too much car to maintain your green cred, the Civic Hybrid should do the trick.

Consider this: Why choose any newfangled compact when you can get something dependable that actually works? Sounds like a Honda Civic to me.