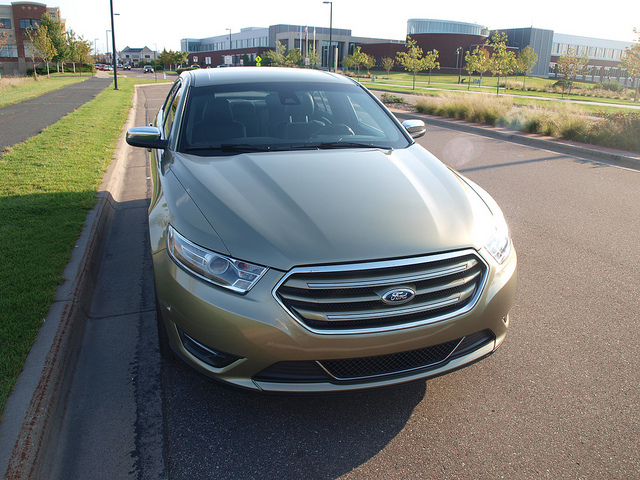 Name one of the most popular automobiles of the past three decades?

If you said the BMW 3-Series, you are right – on a global scale. In the 1990s, the 3-Series began to outsell mainstream models around the world thanks to a boost in the economy across both industrial and developing countries. They were an outgrowth of a world run by Bill Clinton, Tony Blair, and Boris Yeltsin when the common person chucked the low-priced car for something ambitious and upwardly mobile.

However, I ask the question only for North America. That should be an easy one to answer since you probably see at least a dozen of them on the road every day. They range from clapped out models from the 1980s to current members of the rental car fleet. Still, they changed the way we viewed the family sedan from the moment they arrived on the day after Christmas in 1985.

In this case, it is the Ford Taurus.

It was Ford’s after-Christmas sale that prompted a visual adjustment for the American car buyer. The aerodynamic shape of the old Bull welcomed six passengers for commutes and road trippers alike. The size was right with its front-drive configuration, powerful V6 engines, spacious and intuitive interiors and huge cargo capacity. Millions of units later, many Tauruses are still on the road today.

When production stopped in 2006 of the old mid-sized Taurus, Ford sought to replace it two-fold: The smaller Fusion and the larger Five Hundred. The Fusion has since become one of Ford’s best selling passenger cars. The Five Hundred was not.

To save the large Volvo-based front-drive sedan, Ford had to do something. A planned revision and engine upgrade was not enough in the eyes of the company. It needed a more important boost – a name change. 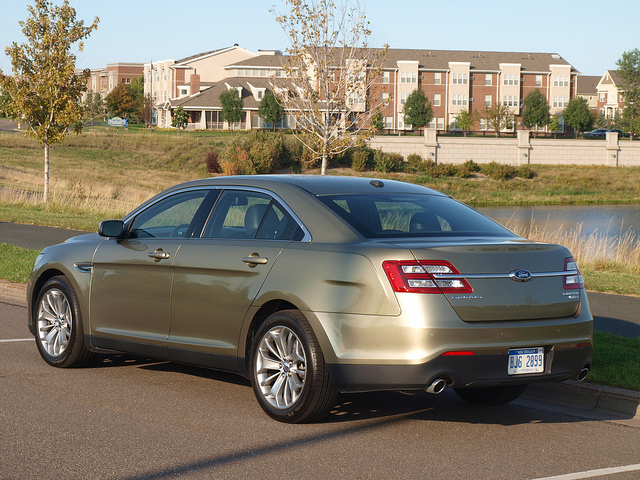 Since 2008, the Taurus name has graced a car larger than originally envisioned three decades before. It continues to do so. A redesign to align the Taurus with current Ford styling tenets was executed for 2010. Now, a revision to that design seeks to help boost Ford in its new mission: To become the big sedan for families again.

Somehow, another task was given to the Taurus. As another strong selling vehicle was given its final assembly run, a gap in a market segment opened up for the Big Bull – public safety. To coincide with the ending of the old rear-drive Crown Victoria’s run, Ford assigned the Taurus to patrol duty. In Minnesota, the Department of Public Safety designated the Taurus to supplant their fleet of Crown Victorias out on the highways of our state. The first State Patrol Taurus was unveiled at the Minnesota State Fair with its first units to be soon reporting for duty late this fall.

As supposedly planned all along, the new-fangled, Volvo-based, front-drive big sedan eventually replaced the old rear-drive Panther platform. The Taurus now sits at the top of Ford’s passenger car food chain. All we want to now is whether it truly belongs there.

Starting on the outside, the changes to the 2013 model may seem subtle. The frontal tucks fit within the company’s kinetic design language. At first glance, you might be apt to compare it to an Audi. If you happen to be one those people, it would be considered a compliment. The goal for this upgrade is to simply have an upmarket air for the Taurus.

Still, the Taurus retains one factor it has had since December 26, 1985 – to stand out in a crowd. The 1960s/1970s inspired design of the roofline is a giveaway for today’s Big Bull. The rear end – also with a lineage going back to the early 1970s – remains unique. Modern touches round out the package from the Limited’s 19-inch alloy wheels and aero-influenced sculpting elsewhere.

If I were to push the boundaries of the imagination and historic context – what Ford has achieved was not just a proper replacement for the old Taurus and the Crown Victoria. You might as well consider this the perfect modern interpretation of your parent’s old LTD. 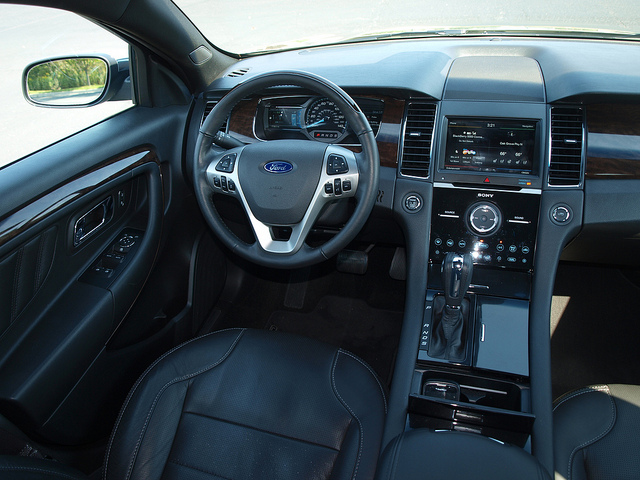 The Limited tester provided further proof of this summation. The level of luxury inside the cabin rivals that of more expensive vehicles in its size class. Black leather adorns supportive seats with more adjustments than imagined. To get comfortable, you simply play with the power seat settings to get it right. Both front seats are both heated and cooled with variable settings. Rear seat passengers are also treated with almost the same level of luxury as those up front. Room is more than adequate for four adults on long journeys. One thing to note is that the front seats are skewed against the center console, but not obtrusive to feel completely pinned against it.

The 2013’s upgrades could be seen right on front of the driver’s seat. MyFord Touch has been integrated into the Taurus featuring a huge center TFT touch screen. You can control the SYNC infotainment system along with the navigation, Bluetooth-connected phone, audio and climate control systems. Soft touch buttons also appear below the big screen on the center stack.

The instrumentation binnacle gets Ford’s new TFT treatment in the Taurus. Flanking the center speedometer are two multifunction small screens. The left one gives you all of the vehicle’s functions from fuel economy and trip computer readouts to showing the tachometer and fuel gauge. The right screen is a redundant screen for MyFord Touch with screens showing you what is playing on the audio system to the person you are talking to. In terms of what MyFord Touch and SYNC could do – this is just scratching the surface. There are enough switches on the steering wheel to control both of the smaller screens.

Considering the combination of retro and modern design, if you know your Fords well enough, you might recognize the shape of the instrument fascia as reminiscent of a 1961-64 Ford Thunderbird – dual cowls with a sloping center stack. The modern touch comes from the higher level of quality to the more tangible parts of the cabin – switches, fascia and door surfaces. The steering wheel feels right for a lot of different drivers with its perfect size, thin, but grippy rim and smart controls. For some drivers, using the center touch screen would be a bit of a stretch to use while driving. The solution to this is to use the capabilities of SYNC – voice recognition and using the redundant switches on the steering wheel – to work MyFord Touch’s functions.

Sound comes from a Sony-powered audio system fed by SYNC and MyFord Touch. Twelve speakers of sound provide the mood from a series of sources, including SiriusXM, Bluetooth-fed audio files, HD Radio and other sources SYNC connects with. The bottom line of SYNC and MyFord Touch – it works very, very well. Infotainment, backed by a brilliant sound and ease of operation, makes for great driving pleasure. Ford has simply nailed it here. 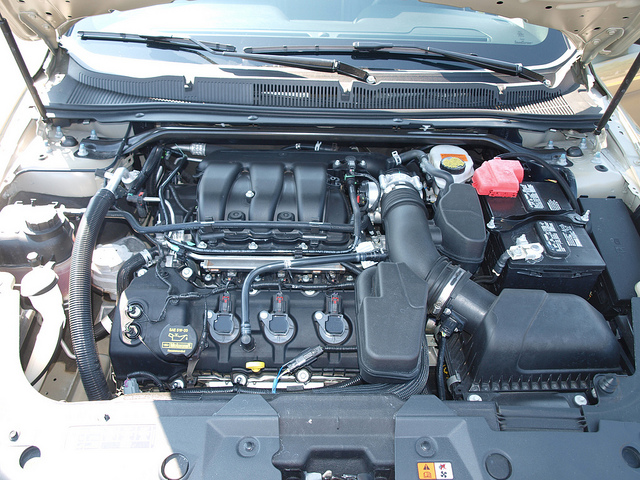 Under the hood is Ford’s familiar 3.5litre V6 – a versatile powerplant that powers a chunk of its most popular products. With 288 horsepower and 254 pound-feet of torque on tap, this engine had more than ample power to haul over two tons of automobile. As an added sustainable bonus, you can either pour in regular unleaded fuel or E-85 ethanol to feed this V6.

Connected to the FlexFuel V6 is a smooth shifting six-speed automatic transmission. Power is sent down to all four wheels using Ford’s latest all-wheel drive system. The combination of the V6 and all-wheel drive would be the most likely driveline for a Taurus in our neck of the woods. You could choose the 240-horsepower EcoBoost 2.0litre four-cylinder turbocharged engine for a new twist on the Taurus and a few more miles per gallon of efficiency. However, the petrol-only EcoBoost 2.0litre turbo it is only available in front-wheel drive.

The key to a good large sedan is a set of driving dynamics designed to soothe the soul. The Taurus made some serious improvements in this department. The ride is solid, smooth and absorbent. Road imperfections and other bumps were felt, but the Taurus’ suspension does a great job of keeping them from shocking through the cabin. Once inside the cabin, you are insulated from the world outside with many different forms of sound deadening. I will say that the Taurus was one of the quietest vehicles I have driven so far this year.

Through the curves, the Taurus leaned a tad with plenty of body and suspension control. It would not be the choice to tackle sharp winding roads, but the Taurus was competent through some nice curvy stretches in town and out in the country. The nineteen-inch Michelin tires provided great grip and a quiet ride to boot. Steering was also competent exhibiting decent reflexes, nominal numbness and a light feel at center. Brakes were sharp and to the point in both regular and panic stops. In all, the Taurus was one solid big sedan.

One of the challenges in a big sedan is fuel economy – especially when mixing regular petrol with E85 Ethanol. Overall, the Taurus V6 FlexFuel with all-wheel drive averaged 22.0MPG. Honestly, that is considered par for the course for 4,000-pound-plus sedans. 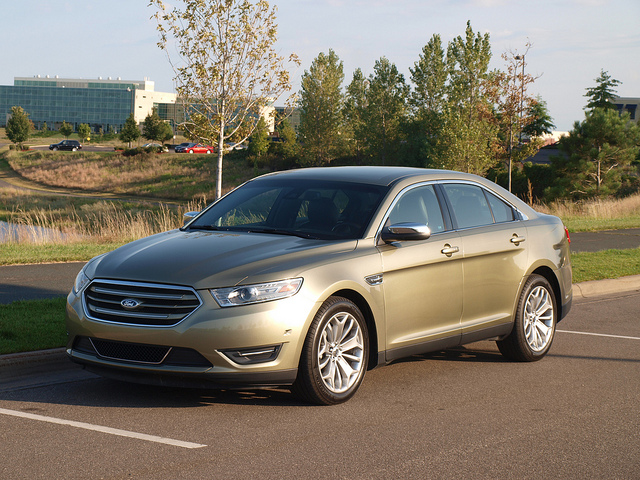 Because the Taurus now sits on the top of Ford’s lineup, its pricing has followed this trend. The 2013 lineup starts off with SE sedan at around $27,000. This Limited all-wheel-drive tester is stickered at $39,940. You get a lot for your money at that price point, but it is well worth it. Yet, you could save $5,400 by going with the lower SEL model concentrating on the MyFord Touch, the SYNC, the leather seating while losing a few luxuries found on the top package in the Limited.

In today’s big sedan market, there is now a choice between some very distinctive models. While some have a bit of pedigree through its brand name, one should not ignore the Ford Taurus when shopping in this segment. The advantage of its on-board technology, proven driveline and solid road manners would put the Taurus in favor over both domestic and foreign brands.

The groundbreaking American sedan of 27 years ago has matured into its new role nicely. It may have grown in considerable dimensions, stature, levels of luxury and technology – the essence of this big sedan still remains a Taurus.