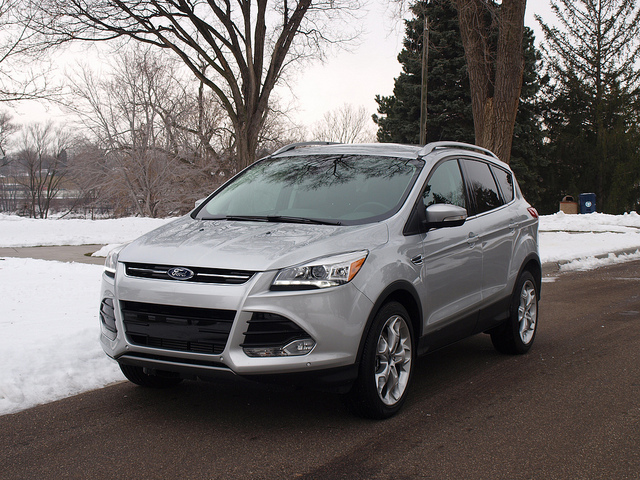 Of course you do! Some of you own one. You know how trustworthy they are. They had more than enough headroom to carry adults anywhere. They brought home garden supplies, flat-packed furniture, your pets, taxiing friends from the bar and bringing your partner to meet your parents for the first time.

All told, Ford sold an average of 160,000 Escapes annually in this country. In total, the past two generations of Escapes yielded two million units sold in the course of twelve model years. In the end, it became Ford’s leading crossover/SUV.

The writing was on the wall for the old venerable Escape to be replaced. It needed to be modern to keep up with trends within Ford and outside of it. It meant fusing Ford’s Kinetic design language onto the popular compact crossover while retaining its edge on fuel efficiency and flexibility as a carryall for all of us. It also needed to be a global product – part of the One Ford strategy that began with the latest Fiesta and Focus.

From the ground level, the new Escape is already a smash hit. The new model’s early arrival created a huge buzz amongst crossover consumers that Ford dealers scrambled to get newly minted units in for wanting customers.

What makes the new Ford Escape a success already? It about being different and distancing itself from past Escapes. The exterior alone broadcasts a willingness to change the landscape through the Kinetic design language. Gone is the squat, tall and boxy shape of the old model. We are indeed treated to something completely different and contemporary.

You are greeted with a huge lower grille with Ford’s new trademark narrow upper grille, stylized headlamps and a sleeker silhouette. Think of the new Escape as an enlarged Focus with all of is Kinetic-ness embodied with every fold, curve and angle. The slightly shorter height is balanced with a right-sized ground clearance for better step-up into the cabin. In this Titanium model, there is a subtle amount of chrome to announce it as the top shelf model. There is nothing “over-the-top” about the new Escape. 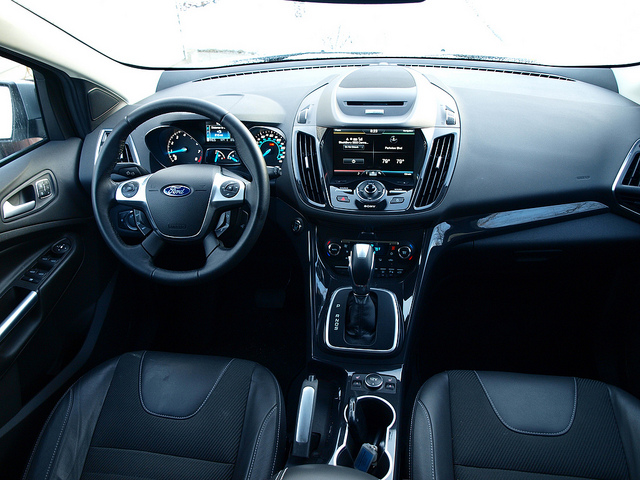 The Kinetic design language and the inspiration from the newest Focus continued inside. A stylized dashboard greets you, with a basic gauge set and two TFT screens. The smaller one its in front of the driver giving essential information across a series of screens from fuel economy to the amount of torque going to each wheel through its four-wheel drive system. Screen surfing is done through a switch on the steering wheel.

Another series of switches on the steering wheel are a part of the Escape’s MyFord Touch infotainment system, powered by SYNC. The main part of the MyFord Touch resides in the larger screen dab smack in the middle of the dashboard. Ford suggests you use the voice commands while you are driving. On some levels, MyFord Touch/SYNC worked quite well. Voice recognition is still close to perfect, however. Managing the distance between the main touch screen and the driver was quite a challenge, especially when having to use the screen for needed adjustments and fine tuning of the MyFord Touch/SYNC experience.

Seating for this Titanium model is a leather/cloth ensemble in a black/gray tone. Once you get settled into the driver’s seat, they are pretty comfortable. Bolstering is good for both the seat and backrest. The driver side is powered, while the front passenger only gets manually operation for rake and recline. The room is fine up front, giving both driver and front passenger a taller position against traffic. Rear seat passengers can also get comfortable with plenty of leg and head room for almost everyone.

MyFord Touch and SYNC offers up 18 presets for SiriusXM and an additional 12 for AM and 18 for FM – both including HD Radio stations. Bluetooth connects both the phone and your music files through the Sony audio system with sound channeled through ten strategically positioned speakers.

There is one more interesting feature to mention here. If you are burdened with shopping bags or anything that prevents you from getting out the keys, use your foot to open the liftgate. This feature is enabled when you move your foot underneath the bumper – without kicking the back of the Escape. It works, actually! Be patient with your foot when you do so. 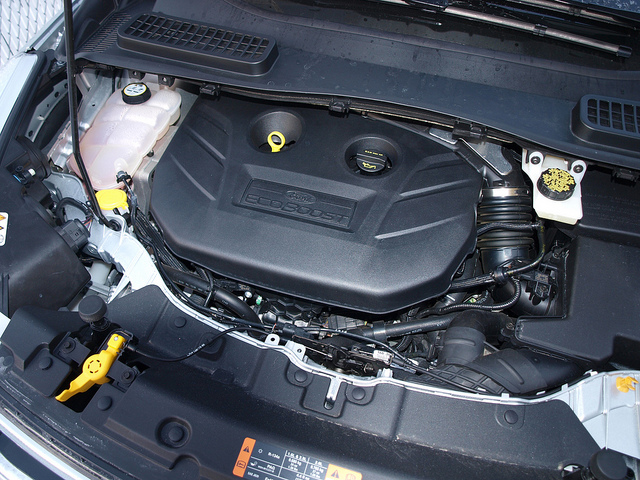 Under the hood is one of several EcoBoost turbocharged engines Ford had been touting for the past couple of years. The Titanium model offers only the 2.0litre EcoBoost four-cylinder engine, good for 240 horsepower. Though the EcoBoost is designed for maximum efficiency and higher fuel economy, there is absolutely no lag in power with the turbocharger kicking in immediately. With the lack of turbo lag, the 270 pounds-feet of torque came on rather quickly – even with a light throttle response.

Power from the EcoBoost is channeled through a six-speed SelectShift transmission. Gear changes were responsive, smooth and unobtrusive. Four-wheel drive operation is simplified and fluid through a torque vectoring system. Combined with the traction control system, the Escape made sure it stayed on course. You can feel this system work overtime on iced and caked road surfaces. The Continental ContiProContact tires provided good grip on any surface and condition – a good choice for Ford on the Escape.

Elder Escapes were always known to be nimble with fine road manners. This new Escape sharpens up on the great attributes of its predecessors in every way.The ride was smooth, but reactive to lumpy roads. Though the Escape was competent in absorbing the bumps and potholes along the way. Handling is quite solid with minimal roll through the curves. There was a true feeling of control in this rendition of the Escape than even the previous generation.

Steering the Escape has always been quite good. The new version is even better with sharper steering response and a tighter turning radius. On-center feel is exacting, something that is refreshing with electric power steering systems. Braking is not bad overall. Panic stops seem to take some distance to achieve, but regular stopping power is just fine. When the ABS kicks in, the wheels are grabbed without much drama and within the control of the vehicle and driver – just as intended. Braking action is direct for all stops.

One point needs to be made about fuel economy with the EcoBoost. Understand what Ford had intentioned through their line of turbocharged engines was to combine power, torque and efficiency. The EcoBoost’s power was too delicious to drive efficiently, even when trying to keep a light throttle. In the end, the Escape Titanium turned in a 21.7 MPG average. A pro tip for EcoBoost owners – use Premium fuel instead of regular as recommended in the owner’s manual. Your turbocharger will thank you. 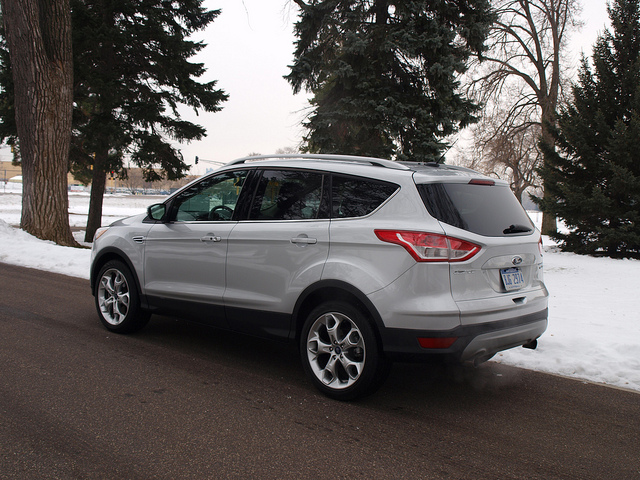 Pricing for the Escape is set in line with its direct competitors. Starting at around $23,000, the Escape lineup offers a broad range of equipment levels and power options along the way. The top shelf Titanium tester was priced at $34,735. This price included the Parking Technology Package with the Active Park Assist – a feature especially made for those of us who are not great at parallel parking.

Looking from the outside, the Escape may look different than what we are used to. Perhaps it is a good thing. It is aimed right at the core of its segment – the Toyota RAV4, Honda CR-V, Chevrolet Equinox, Dodge Journey and so forth. Compared to the top sellers in its field, the Escape is now more “right-sized” – inside and out. It is also more of a true crossover with some capabilities to get through the worse the world throws at it.

Today’s Escape is poised to extend the success it had over two previous generations. The question is: Are you ready for the new one?