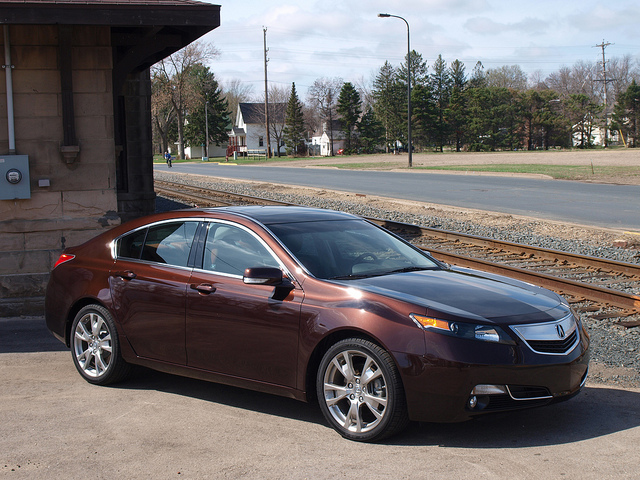 Do you still remember the best automobile you ever owned?

I remember the day I took delivery of a 1991 Acura Integra RS coupe. It was dusk on a Thursday in November of 1990. I arrived with a cashier’s check at Marin Acura in Corte Madera, California ready to take my brand new baby home. The vehicle in question was just finished with detailing after the air conditioning unit was installed into my Concord Blue Metallic hatchback.

The car was not equipped with all the luxuries we have come to expect from an Acura today. But, I did not care. I wanted something pure, with fine handling and enough agility to possibly take it to a track – namely Sears Point (now called Infineon). All I needed to add to my new Integra was an audio system that matched my taste. I took it across the highway to an electronics retailer for the aftermarket installation. The rest is history.

The experience lasted two-and-a-half years. I miss it a lot – even today. There are plenty of regrets – I never took it on a track, ever. The Integra did make it to my brother’s wedding a month after I took delivery of it. Also, it went on a few dates with my first boyfriend, and delivered me to my undergraduate commencement at California State University, East Bay in June of 1993.

There is a void that has lasted 19 years since I parted ways with my Integra. Is there a way to close this gap so I could get over my lament over my prized Concord Blue Metallic 1991 Acura Integra RS coupe? Is there something wearing the dual caliper badge of Acura that is worthy of the spirit of my old car?

Perhaps I need to find its spiritual successor. Maybe there is some descendant out there with the spirit and the magic of my old hatchback coupe. Sadly, Acura does not sell a three-door hatchback coupe anymore. Not since they cancelled the RSX in 2006. The lowest model in their lineup is the re-branded version of the Honda Accord Euro – the smaller version of the Accord sold in various parts of this planet – called the TSX. This coming fall, a new smaller Acura will debut in the U.S. – the ILX.

Still, the quandary persists. Maybe the approach to find the right Acura should take into consideration an old Integra owner who has grown up, but remains loyal to the brand. It would have to be the right vehicle for an owner whose priorities have changed along with their economic status and social standing in the community. Yet, there is still the want to quench the right foot’s need for hitting the limiter – to simply feel what Acura can still do to an enthusiast. 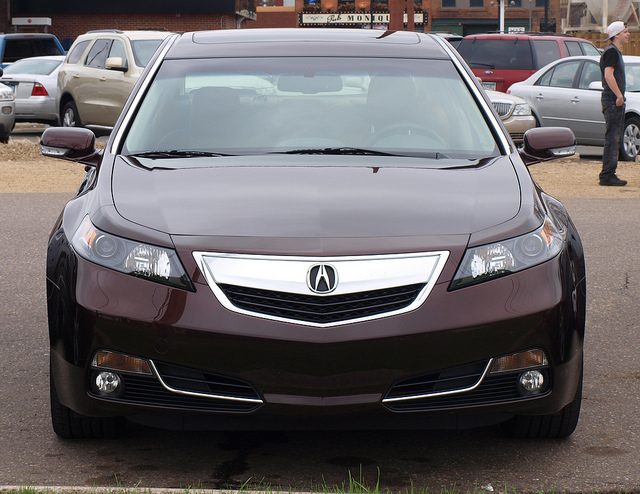 Perhaps this Acura TL would do the trick.

This big, bold, and beautiful sedan came from a lineage that began with the groundbreaking Acura Legend of 26 years ago. When Honda’s new luxury sedan arrived at select showrooms across the U.S., it broke new ground for Japanese automakers. The evolution of the species spawned various Acura sedans – both developed in Japan and in the U.S. – designed to woo luxury car consumers to their technologically advanced vehicles with rather edgy designs.

There are plenty of luxury car buyers that would dismiss a vehicle sporting such an edgy design with a plethora of advanced technology on board. The TL may surprise you.

The latest TL went through some nips and tucks to tone down some details that provoked many critiques of Acura’s design philosophy. For example, the satin-chrome “shield” up front was a point of contention for luxury car purists and the automotive media alike. The shield has been toned down and given a better finish to compliment an even more handsome and athletic silhouette. It also helps to have a fine hue to go along with this design, since the Mayan Bronze color on the tester was absolutely dazzling.

In this SH-AWD (Super Handling All-Wheel Drive) model, a set of 19-inch wheels created an appropriate finish to the overall exterior design. From one angle, it is a luxury mid-size sedan; from another, it is an aggressive sports sedan. The TL is an exacting combination of both. 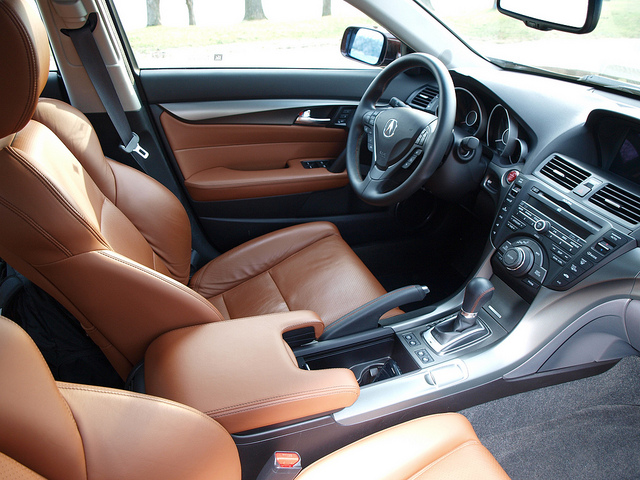 Step inside, and the TL truly welcomes you. The first whiff of the leather seats lures you in. Once you comprehend the sea of buttons from the steering wheel and on the center stack, you are entertained with plenty of soft touch materials and an even softer hide in umber. The seats are on the firm side, but they are big with the right amount of bolstering to keep you in place through the curves. There is plenty of room for four adults inside, along with their luggage for an extended weekend.

Acura and Honda made sure that the TL is truly a driver’s car. The dials and steering wheel are the right size. Controls are of the right size and touch – mostly within reach on and around the steering wheel. A driver can insert the remote key fob next to the red ignition button, or you can leave the fob in your pocket until it’s battery runs low. You also get blind spot monitoring to rein you in sudden lane changes without looking.

The shifter for the six-speed automatic gearbox on the center console reminds you of a short-throw manual. There are paddle shifters on the steering wheel, which only work if you put the shifter into Sport mode for better control of the gear changes. However, they are attached to the back of the wheel rather than the column. If I wanted to use the “flappy paddles,” my preference would be for them to be stationery with the column for better steering-to-shift control.

This TL came with the Advance package – a suite of technological goodies designed for the geek in all of us. It starts with a huge LCD screen that can be switched from the navigation system to a large, easy-to-comprehend audio system readout. A smaller screen is below for redundant messages from the audio system, along with climate control settings. Sound is channeled through Acura’s ELS/Surround system’s 10 speakers from the output of a 440-watt amplifier. There are plenty of audio options to choose from, including a 15GB hard drive that could hold 3,600 of your favorite songs, or the ability to grab your song files from your Bluetooth-enabled phone. There’s more to this audio system, but all it takes is one listen. It is indeed a wonderful noise.

Normally, TL owners would settle for just a 280 horsepower, 3.5litre dual overhead camshaft V6 with four-valves-per cylinder and so forth. But, you would have to settle for front-wheel drive with that engine. Since this tester came with Acura’s SH-AWD, it came with 305 horsepower of V6 goodness, displacing at 3.7litres. Frankly, the latter engine is absolutely perfect for the TL.

With the 3.7litre V6, you get a great balance of quiet operation and refined anger. Spool up the throttle and find yourself delighted by the response. As mentioned before, a six-speed automatic is mated between this engine and the SH-AWD system. 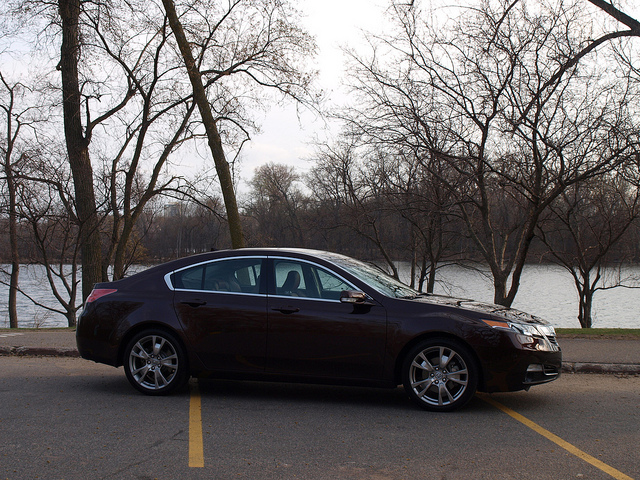 Having driven a few all-wheel drive systems on both sedans and SUV/crossovers, I never had a chance to discover what one feels like in a luxury sedan when it is tuned for traction and handling. We can talk about Audi’s Quattro system, BMW’s xDrive, Mercedes-Benz’s 4Matic and so forth, but Acura’s SH-AWD system is worth considering. Through a challenging rainfall and typical Twin Cities freeway traffic, the TL’s SH-AWD simply worked by putting power and grip down to all wheels even during evasive maneuvers. This system works the corners extraordinarily well – all four wheels gripping without hesitation or complaint. The Goodyear Eagle RS-A tires added more glue for the SH-AWD to work extraordinarily well.

In short, this is one heck of an all-wheel drive system.

On dry roads, the Acura provides fantastic handling with near perfect body control on banks and curves. The TL is simply calm and confident when getting out of the most precarious situations. With everything you touch, the TL responds immediately. The ride is solid and smooth, but just a tad on the firm side. That firmness comes into play with road imperfections, yet the suspension dampers do a fine job balancing them out. Steering is sharp for a big sedan with fantastic road feel and feedback. As far as stopping power, it is quite good in both normal and panic braking.

As expected, the TL is a bit on the thirsty side. Overall fuel consumption came to 20.6 MPG. Considering all the factors involved – weight, performance and the AWD system – that number is a very realistic view of what to expect from a luxury sport sedan such as the TL.

The price of admission is surprisingly competitive. While it may not be seen as a direct competitor to BMW’s 5-Series, Audi’s A6 and the Mercedes-Benz E-Class, the Ohio-built TL starts out at just south of $37,000. My tester, with the SH-AWD and Advance package came in just under $46,000. It is not exactly a bargain, but consider that you do get a lot for the sticker price – performance included. 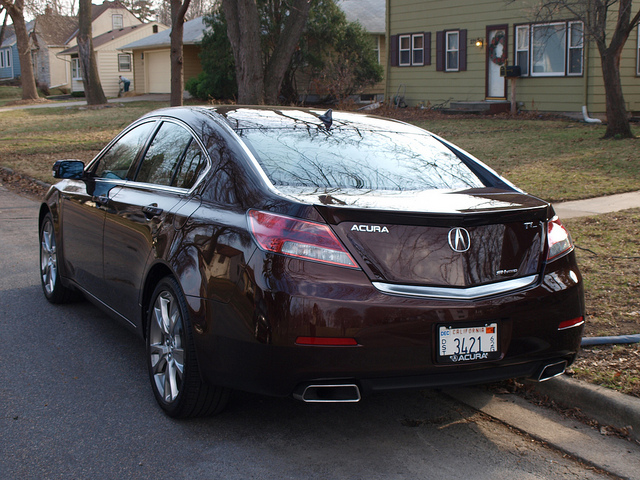 When luxury car buyers discuss brands, listen very carefully. There are a significant number of them that are loyal to their brands. Others hope to find something that fits their lifestyle regardless of which brand they choose. Acura provides buyers a choice of luxury vehicles with edgy styling, high levels of technology, and performance.

The TL is no exception. As a big sedan, you get the comfort required in this class of car along with the technology and performance Acura is known for. Even if you are married to a specific luxury brand outside of Acura, give the TL a chance. You may find it very uncommon and satisfying – just like my old 1991 Integra.

As for my quest to come full circle with my 19-year gap with Acura? Mission accomplished.