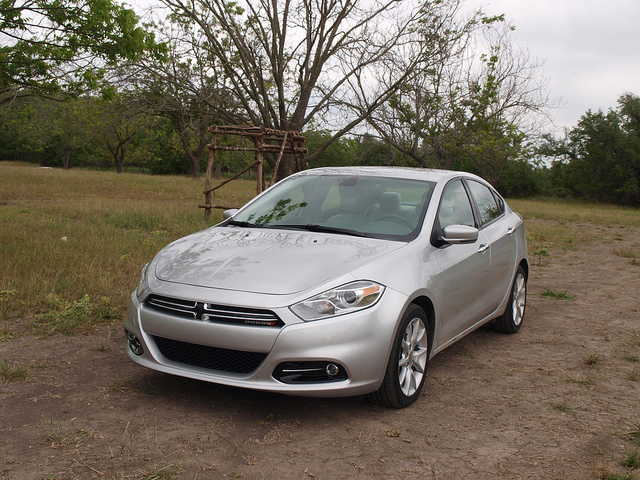 The first thing that comes to mind about the state capitol of the Lone Star Empire is its quirkiness. Austin does not represent the rest of state by the people and the openness of anyone who is different than the stereotypical Texan. Not everyone within the capitol’s environs share the ideology of its Governor. Austin folk would probably have more in common than one of its most celebrated residents – Matthew McConaughey.

While the capitol is prominent in the center of town, the campus of the University of Texas is immense in both real estate and community importance. It is perhaps a law to be a fan of the Longhorns – or, else. It is also a law to possess some form of creative outlet if you want to live in Austin. Case in point, Nakia from the first season of “The Voice” is a prominent and quite popular local performer.

After all, the city is the home of the South-by-Southwest confab and “Austin City Limits.”

I have never been to Austin. The only time I touched down in the state was to change planes at Dallas-Fort Worth International Airport en route between Minneapolis-St. Paul and Burbank. It was not my decision to come to this place by my own devices. It was chosen – for a very important mission.

Since 2009, this vehicle was right-and-center on my radar. The journey began on November 9th of that year when Sergio Marchionne and his leadership mapped out a five-year plan for Fiat to reinvent Chrysler. Part of the plan was a fusion of Fiat-developed platforms and Chrysler design and manufacture. The aim was to create a world-class lineup of vehicles with global resonance as well as creating opportunities to sell them to North American consumers.

Every step of the way, the Dart was shaped by Fiat’s C-EVO platform currently unpinning the Alfa Romeo Giulietta and the Lancia/Chrysler Delta. For Chrysler, the C-EVO became the CUS-wide platform. By the time the North American International Auto Show opened to the global press in Detroit, the dream was fully realized. Witnessing the Dart at the auto shows in Chicago and Minneapolis confirmed my initial reactions to this byproduct of the synergy between Turin, Milan and Auburn Hills. 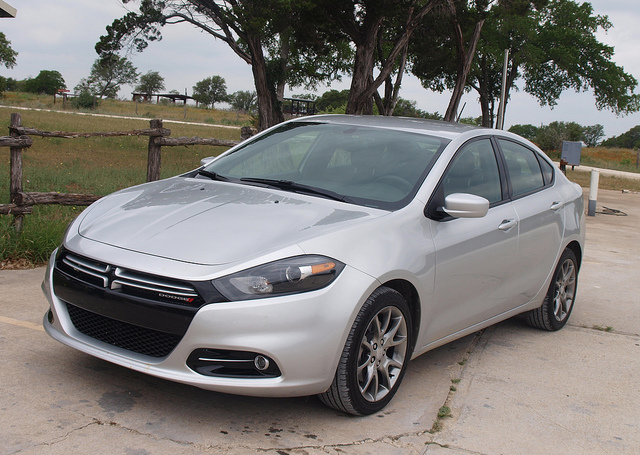 In Austin, the dream became a production-fed reality forged by the men and women at the Auburn Hills headquarters and along the Belvidere, Illinois assembly line. As part of my mission, I came to the Texas capitol to experience the Dart with all systems operating. There was a varying selection of the newest Dart to experience out in the Hill Country – a haven for enthusiasts and leisure drivers alike. This was more than just reality being played out here.

The Chrysler story has been one that had been part of my life since right after birth. That moment was forged back when my father brought home a new 1965 Plymouth Satellite hardtop coupe and the subsequent 1970 Plymouth Barracuda. My automotive history had always been dictated in part by the Pentastar. I only have been a spectator covering the transitions, the ups and the downs of Chrysler for the past several decades.

Now, I am presented with the first offspring of Sergio Marchionne’s five-year plan to leverage Fiat’s re-born engineering and manufacturing processes onto a new wave of products under the Pentastar. Did Chrysler and Fiat do this one right? Will Chrysler’s recent financial and sales resurgence continue?

From the outside, all signs are indeed positive. The Dart appears to be a bit larger than the average compact sedan, but who’s counting size when purpose matters most? It is handsome – perhaps the best looking product in its class. Yet, it is daring – forging elements of Dodge’s design tenets from various models onto this smaller frame.

Everything in the look of the Dart has been made to entertain the eye and felt to the touch – even on the outside. Though there are some who claim of derivative elements cribbed from the competition. I beg to differ. There is a high degree of personality that makes the Dart stand out in a crowd – even if the crowd happens to be other Darts.

During the drive, I was able to sample two different models – the Rallye and the Limited. While the Rallye offers up a sporty motif at the middle of the range – essentially a lateral upgrade for the SXT – the Limited shows the Dart’s luxury side with subtle upmarket cues. Aside from the three trim levels already mentioned, you could start with the SE at around $16,000, go to the top of the range with the R/T and the Aero model, touting a 41MPG highway rating. The first batch of Darts will be arriving at Dodge dealers sometime in June. 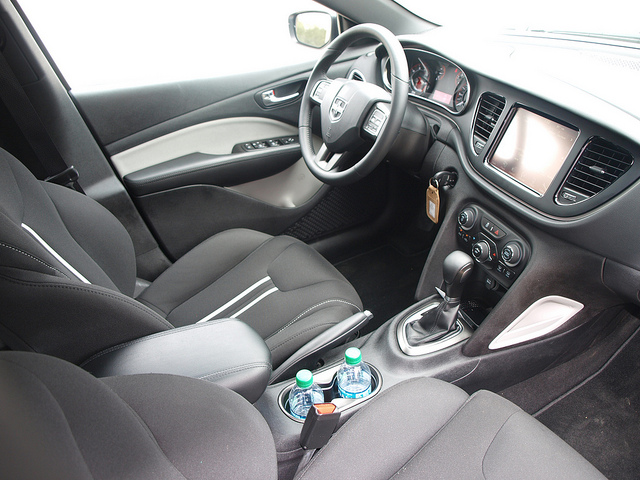 Once inside the Dart, there is a lot of offer for the driver. Between the Rallye and the Limited, you can find a happy medium that fits your driving style and comfort level. The Rallye sports contoured striped cloth seats with good of amount of bolstering, while the Limited has a lovely two-tone leather surface covering a very comfortable and relaxing cabin. Front room is fine, but taller drivers may want to adjust accordingly to fit. I found a comfortable position in both the Rallye and Limited, though I favor the Limited by a hair to my tastes.

One thing to note is that rear seat room may not be as generous as I hoped. Both headroom and legroom are better served for average-sized adults than larger ones. Trunk space is very decent for its class and an additional storage area is available underneath the front passenger seat cushion.

The gulf between the two examples I drove widens when presented with the instrument panel. The Rallye offers up a basic speedometer, tachometer, fuel and temperature gauges with a small center digital screen for trip information readouts. Below that is the slot for the fob-like, insertable key that was left behind by Daimler AG after they parted ways last decade.

The Limited steps up the game by a mile. You get a tachometer and the fuel/temperature gauges on each side. In-between these two dials, a seven-inch central TFT LED screen houses the speedometer that you can select how you would like to see how fast you are going and what kind of fuel efficiency you are experiencing. The TFT seven-inch is the key to personalizing your driving environment per the way you want to see how fast you’re going and your trip information. Starting up the Limited takes a push of a button and a newfangled fob to make sure it all works when you’re in the car.

In the Dart, you are presented with an 8.4-inch touch-screen dead center of the instrument panel controlling the infotainment options depending on model. In the Rallye, the screen offers up AM/FM/Sirius satellite radio readouts and controls, along with Bluetooth connectivity. The Limited tester came equipped with the UConnect Touch infotainment suite with a Garmin navigation system along with a reversing camera. The screen is quite huge and could vie for your attention, but it is useful in all the right situations. The sound quality is fantastic regardless of model – especially the Rallye and the Limited.

Controls are good to the touch, with both audio and air conditioning/climate control knobs and switches living below the big central screen. The wiper controls are shared on the same left stalk that controls the turn signals and high beams. A knob on the lower left corner of the instrument panel controls the headlamps, probably best to set for automatic control. Cabin safety is covered by the installation of ten airbags to protect you and your passengers in every conceivable way. 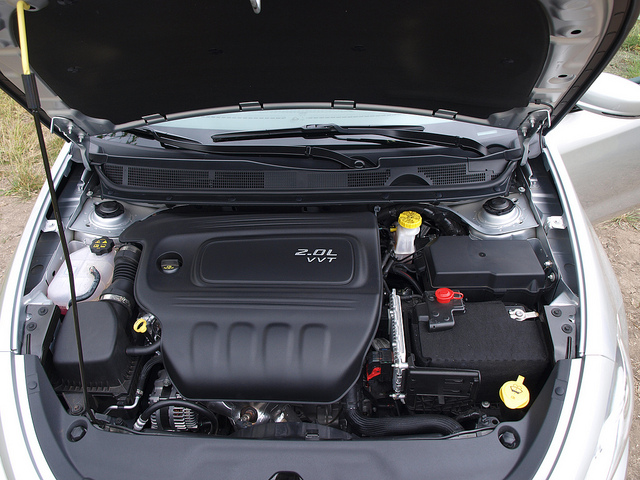 Both the Rallye and Limited models I drove had the 2.0litre Tigershark four-cylinder engine. On the surface, it is your standard dual overhead camshaft, four valves-per-cylinder engine with variable valve timing and so forth. The result is a 160 horsepower mill that feels quite decent. Combined with a brand new six-speed automatic gearbox, the 2.0litre Tigershark can be at ease when at speed. Push the throttle from a standing start and it will let you know its want for higher performance even with just 148lb.-ft. of torque. In the Rallye in particular, I hit the limiter a few more times than I’d really like. I also noticed a lag in both models thanks to the occasional long first gear that hates having to re-shift up hills. All Darts have front wheel drive.

Chrysler also offers two additional engines: The 2.4litre version of the Tigershark, good for 185 horsepower or Fiat’s 1.4litre Multiair turbocharged engine with 160 horsepower. If you choose the Multiair Turbo and would rather not depress a clutch for its six-speed manual gearbox, Fiat’s DDCT six-speed dual clutch gearbox is available.

The most exciting part of driving the Dart was discovering how well its driving dynamics package has come together. The ride is solid and supple. You can feel a bit of firmness on the Rallye than in the Limited. Handling is a similar story. The best way to describe the handling package in both the Rallye and the Limited is “near perfect.” It takes curves very flat. There is just a tad of roll in the banks and curves making the drive much more enjoyable and honest. If you attack the curves, as a good enthusiast should, the Dart truly comes onto its own in both the Rallye and the Limited. The combination of a sharper, weighted steering set and refined suspension set-up invites you to grab onto a curb without trepidation. Steering wheel action is near center with no play. Reaction from the wheel is sharp and exacting. The Continental tires shod on both models grip very well, despite tire noise from rougher surfaces.

If there is one drawback to the Dart, it would be the brakes. They start out pretty touchy at first, but they do modulate once they get going. However, panic stops are sharp to the touch. I expect the brakes will be sorted out by the time the actual production models arrive at your showroom.

In terms of fuel economy, Chrysler touted competitive consumption figures for all of the engine/transmission combinations. While driving a realistic Texas Hill Country loop, I averaged 29.1MPG. With all things being realistic, that number is right where the class should be for a mix of city and highway driving. You would most likely get better fuel consumption with the 1.4litre turbocharged Multiair engine – even with the new dual clutch gearbox. 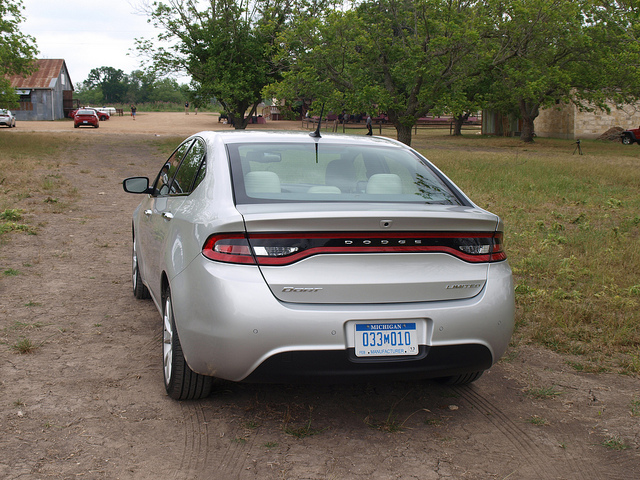 Let’s get this question out of the way: Was it worth the trip to Austin to drive the Dodge Dart? The allure of driving a car that has the potential to change the compact game and to take a company up another level was more than enough to convince me to come to Texas. It was time well spent in Austin and in the Hill Country – the results were beyond expectations.

The Dart represents a reboot for Chrysler under Fiat’s tutelage. With most reboots, the end result is better performance overall. When you drive the Dart, notice everything. Feel the vehicle, hear the engine, throw it into a curve – just keep an open mind, even if you’re married to another manufacturer.

This is why the Dodge Dart has become the most important debut this year. This is why Sergio Marchionne has put all bets down on this car. This is why Chrysler will continue its recent success.

It is why this story will continue.