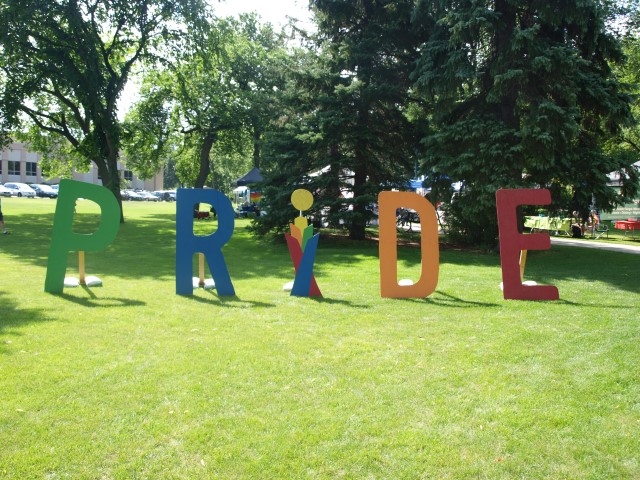 Pride season is far from over here in the Upper Midwest.

So far this year, we showed our love for community and culture from Twin Cities Pride to other celebrations in smaller communities within and further afield from the Minneapolis-St. Paul area. In Golden Valley and Columbia Heights, our community looked to our own neighborhoods to celebrate ourselves. Some of us celebrated in places ranging from Pine City to Sioux Falls, Eau Claire to Des Moines.

However, we reserved the final weekend of June for the most important pride celebration of our history: the 50th anniversary of the Stonewall Riots in New York City. From what we have seen in photos in this magazine and on social media, plenty of us made the trek from our communities to the Big Apple to honor our history, our present, and our past.

After taking a break through the month of July, things are heating up again as rainbow flags, along with many other flags, start flying with pride, celebration, and protest within our region.

Our calendar pointed to a celebration along the Red River that splits Minnesota with North Dakota. The cities of Fargo and Moorhead held their Pride weekend from Aug. 8-11. And we decided that a road trip was in order to attend this Pride celebration.

In planning our road trip, the good folks at Toyota Motor North America connected with us and lent us a hand in making our journey a memorable one. After discussions about our plan to do our story to cover Fargo-Moorhead Pride, they provided us with a room and a car. Not just any car, mind you.

Our ride to Fargo was a 2019 Lexus ES 300h Ultra Luxury sedan. This is not your typical road trip vehicle, but it had some advantages to help ease the pain of a journey that takes less than four hours to make from the Twin Cities. The big advantage was its hybrid gas-electric driveline that averaged 43.2 MPG during our journey. The Ultra Luxury package provided us with absolute comfort and amenities making the trip an easy one for us.

While we enjoyed our luxury ride to Fargo, we had a job to do. We wanted to see not only what Fargo-Moorhead Pride was all about, but to talk to the folks in the community about what this year’s pride celebrations mean to them.

Fargo is proud to have an out GLBT person representing them in the North Dakota legislature in Bismarck. Joshua Boschee has been on the forefront in introducing legislation to extend rights for the state’s GLBT citizens. “[The North Dakota legislature] were there January through April of this last year,” Boschee explains. “And related to LGBT-specific policy, we’ve continued to work since 2009 on fully inclusive non-discrimination policy. We haven’t made the progress we’ve hope we could’ve, but certainly continue to venture and work it as a way of connecting the LGBT community to policy work.”

Some of what we witnessed at Fargo-Moorhead Pride is part due to sharing a state line—and a river. Boschee explains, “I know the progress that’s been made in Minnesota has trickled over the river, over the border, because we are a dual community, both Fargo, West Fargo, Wahpeton, Breckenridge, Grand Forks, East Grand Forks, policies that get enacted in Minnesota find their way into these communities.”

An old friend of the Twin Cities made his home here in the Fargo-Moorhead area. After leaving his position as Executive Director at The Aliveness Project, Joe Larson returned to his pastoral roots and was invited to the highest-ranking GLBT clergy in North Dakota a few years ago. As Pastor at Saint Mark’s Lutheran Church in Fargo, Larson took on a more active role in this community not from his pulpit, but as a board member of the local community organization, the Pride Collective.

“Having moved from Minneapolis,” Larson explains, “it’s definitely more conservative here. North Dakota is a very red state. Fargo, you know, is a little bubble, a little more progressive on the rest of the state. It’s nice that I’m serving in Fargo. But there’s a lot of people who don’t feel that they can be out. We don’t have any legal protections in North Dakota around discrimination or housing or employment. Some people can’t come out at work because they’re afraid of losing their job. And it’s a smaller community. It’s amazing during Pride we get all of these people who show up. Like I went to the dance last night and then during the rest of the year, we don’t have a gay bar here. There used to be, years ago.”

As transgender issues take a larger role in our community’s quest for expanded rights nationwide, a local group, Tri-State Transgender, has taken the lead to be the beacon over the past 20 years for other transgender people, including those in South Dakota, along with North Dakota, and Western Minnesota. I had the chance to talk to two leaders from Tri-State Transgender, Katrina Koesterman and Rebel Marie, to learn about the triumphs and challenges of their group in the current sociopolitical climate.

A prime example of this came from some experiences Marie had leading up to the Pride Festival. “Just the other day,” explained Marie, “I was going downtown, and I ran into about ten people who I knew, who waved and were really friendly and outgoing, and I felt very safe. However, also today, we were surrounded by a bunch of people at a restaurant that had paraphernalia that was very evident that they wouldn’t support our existence. Sometimes it can be very affirming, and it’s great to be here, and sometimes it can be frightening.” Koesterman adds: “We also have some people that aren’t very supportive, that will give us the cold shoulder, or downright try to hurt us. We get both ends of the spectrum here.”

“One of the things that’s unique about our organization is,” Marie explains, “Kat represents the Minnesota side, and I represent the North Dakota side. A lot of the things in Minnesota, a lot of the legal things creates an environment that… You can change your pronoun on your license a lot easier. You have housing protections, which in turn, protects your ability to maintain a job. You can’t get fired outright if you have a job in Minnesota, and then, if you have a Minnesota license, it’s a little bit easier to find work.”

“In North Dakota, we have what’s called a ‘housing first model,’” Marie explains further, “for helping with addiction and mental health needs. Anybody who’s homeless, they’re going to try to get them into a home first. However, without any of the anti-discrimination laws that protect housing, we’re not getting healthy. We’re not having a robust community in the North Dakota side. A lot of people are choosing to either find work in Minnesota, or just live in Minnesota, so they can access other services, like healthcare, addiction services, and have all those protections that they needed to survive.”

As far Tri-State Transgender is concerned, Koesterman gave an overview of where things are at with the local transgender community and what the future holds for the group and the community. “I think that a future in which being trans is normalized is where we need to be,” said Koesterman, “where we don’t have to do interviews like this, where we don’t have to get together for support groups as often, we are just normal. It’s just a part of everyday life. We are seeing that. We’re seeing attendance at Tri-State Transgender go down a little bit because people don’t need the support as much because it is becoming normalized. We need to continue that trend.”

Our community welcomes new generations to our fold. At the festival, I was privileged to talk to a young transgender person named Phoenix. He simply blew me away with his story, as he begins his freshman year at Moorhead High School. “I’ve had the support of peers and many staff,” said Phoenix, “and going into the high school, I’m really anxious to see how it is, but I have an older brother who’s in high school as well as some friends, because I worked on one of the high school productions there, and I’m nervous, but at the same time know that I have support systems within the high school already.”

It is worth noting that Phoenix spoke at the Interfaith Service prior to the start of Sunday’s parade. He will be speaking about his transition. “I’ll be going into a bit of more detail,” said Phoenix, “as well as being yourself and still remaining safe.”

As part of this journey, I wanted to connect with other people in this community. Part of this quest to connect was to discover a community of GLBT people who are in the midst of getting older and looking for outlets to connect with people their age for support and social purposes. This is an issue that hits home for me, as I now in my mid-fifties and had some challenges recently because of my age and health.

During Pride weekend, I connected with the Red River Rainbow Seniors. They had a social along with AARP’s North Dakota office, at the Boiler Room in downtown Fargo. “This group addressed the issues of our aging population through engaging the community and bringing them together,” explains Larson. “We worked hand in hand with AARP on that. We hold monthly happy hour events. In fact, I kind of took the idea from Lavender‘s First Thursday when I came here, I said, ‘we should do something like that.’ And then people said, ‘well let’s do it for older people.’ And, so, every month we meet at a bar or restaurant and it’s just a social happy hour. It’s so it’s, it’s great. And you’ll get 20 to 30 people every month.”

The biggest takeaway from Fargo-Moorhead Pride weekend was the energy and vibe I got from those I saw attending and participating at the festival and the parade. In fact, the Parade had a growth in contingencies with about 30 floats this year—the longest parade in Fargo-Moorhead Pride’s history. They also saw a larger turnout for the Festival, the Parade, and the Rally.

As Fargo-Moorhead pride grows, there is now room for smaller Pride celebrations across the country. With Pine City and Golden Valley growing and St. Cloud’s Pride celebrating its 10th year, we are finding other small celebrations popping up from Columbia Heights; Mineral Point, Wisconsin, and in Minot, North Dakota—to name a few.

Having witnessed a successful pride in Fargo-Moorhead is a welcomed sight for someone who is used to both large and small celebrations. Before you ask, it was well worth the drive to be there.