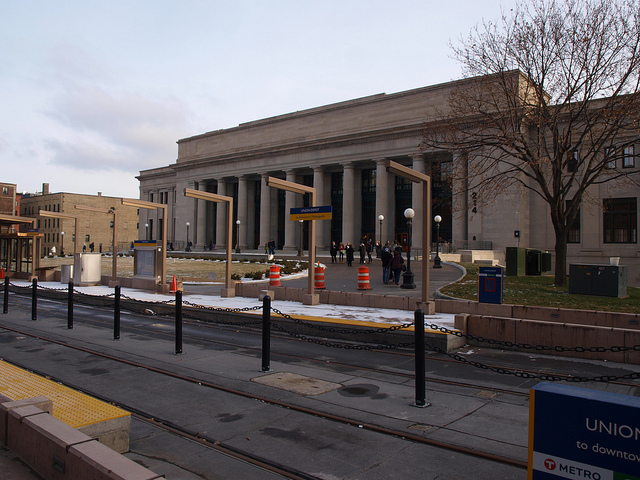 Union Depot in St. Paul - All Photos by Randy Stern

Union Depot in St. Paul – All Photos by Randy Stern

The Twin Cities now has a new transportation hub. It is actually the same as an old one.

The pubic arrived on December 8 to check out the newly renovated Union Depot in St. Paul. The purpose is to introduce the Twin Cities public to the future of public transportation by renovating an old hub after 40 years of stasis.

A collaboration of governmental and private entities, spearheaded by the Ramsey County Regional Railroad Authority, came together to bring the old transport hub to life again. Through the work by Mortensen Construction, they have done so by bringing back the old grandeur of the depot with modern touches throughout. It will be the new stop for Amtrak’s Empire Builder service in about a year’s time and the terminal for Metro Transit?s newest light rail line in 2014.

Metro Transit buses have begun to use the new bus bay at Union Depot as a terminal for one of their busiest lines ? the 21 serving both St. Paul and South Minneapolis. After the first of the year, Jefferson Lines will start intercity bus service. Cities served by Jefferson Lines will be announced shortly. Shuttle buses to Mystic Lake Casino and Resort in Prior Lake will also operate out of Union Depot.

Even bicycles will be a part of the new hub. One-on-One Bike will have a full service center at Union Depot that will offer everything from repairs, bike storage and lockers – even showers for bicyclists.

Why put forth the effort to renovate this historic location in St. Paul? For decades, the railroad came to St. Paul for passengers traveling between the Twin Cities, Chicago and points west. The building was erected in the 1920s at the height of railroad transportation. By 1971, passenger trains no longer served the depot. Since that time, Amtrak operated at a smaller facility west of downtown St. Paul off of University Avenue.

There were efforts to revive the terminal. Several years ago, some of the depot property was turned into lofts. Limited retail and dining was present and the depot was seen as an event place for receptions and other social functions.

The drive to renovate the terminal came with a push to improve and expand public transportation within and beyond the Twin Cities. For commuter rail to take a stronger hold in the region, a couple of efforts focused on how to better utilize the Union Depot property. The key to doing so is to build the Central Corridor light rail – linking Minneapolis and St. Paul along University Avenue and through the University of Minnesota Twin Cities campus complex. The controversial transit link is nearing completion to its infrastructure with several more steps to go before its first revenue service in a couple of years.

By terminating the Central Corridor Line at Union Depot – to be called the Metro Green Line – the opportunity for creating a true intermodal transportation hub began to take shape. Already, Amtrak and Metro Transit were on board. Others would join, including two proposed commuter rail lines and the project to create a high-speed rail link between Union Depot and Chicago. 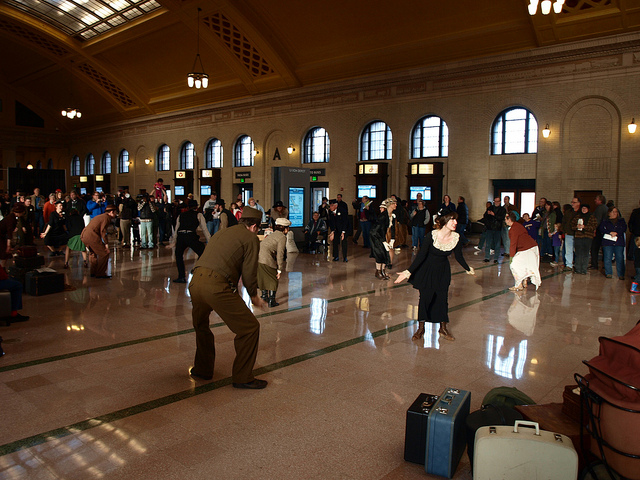 It appears that Union Depot will be off to a good start over the next two years. Yet, it seems that there is something more to consider when utilizing the depot. It is one thing to state that several projects are years away, but what about the immediate need? How would the powers to be fully utilize the renovated hub after the LRT makes its first stop?

What would help the depot is to expand utilization to include Greyhound. This is to not compete with Jefferson Lines, but to augment the intercity bus service piece. Also, without knowing which communities will be served by intercity bus, it is hard to know which services could be utilized from St. Paul with the Hawthorne Transportation Center in Minneapolis in mind. Will service compete or complement each other between all the bus services available in both cities?

Though the primary driver of the reopening of Union Depot is expanded rail service, what will it take to move up the current timelines for these services to begin operation? The promise of the Rush Line (service to Forest Lake) and Red Rock (service to Hastings) corridors by next decade was supposed to add value to Union Depot to the point of creating a more vibrant commuter hub for the state capitol.

Perhaps the most important piece of the Union Depot transportation puzzle is the proposed high-speed line to Chicago. Since Wisconsin Governor Scott Walker refused Federal funding for rail projects, the service is now in doubt. For Union Depot to be fully realized by the end of this decade, it is imperative that another passenger rail service serves the station – even if it is the only stop for the entire Twin Cities market.

I am also curious as to the mix of retail and dining that will be included in the renovated depot. The Lowertown neighborhood is poised for further growth, once the new ballpark for the St. Paul Saints is built. Union Depot would serve as one of the focal points for this part of downtown St. Paul and a wider choice of dining and retail options are necessary for this neighborhood. The Farmer’s Market is already a magnet, which Union Depot should take advantage of.

Already, the Depot will be staging film showings during the holidays and beyond. Once the hub gets busy, I could see more community engagement events happening in this great space. The caveat to continuous attraction to the building is a high level of maintenance, security and safety. A clean building will attract a wider community, while one left standing alone will not.

There is huge potential for St. Paul’s Union Depot as an integral transportation hub for the Twin Cities region. To fulfill this potential, growth must be sustained with a better timetable than proposed. The needs of the region’s transportation options are more critical than we think, as this must serve all of the Twin Cities – including Minneapolis.

It is a very good start for an old depot to come alive at the right time.