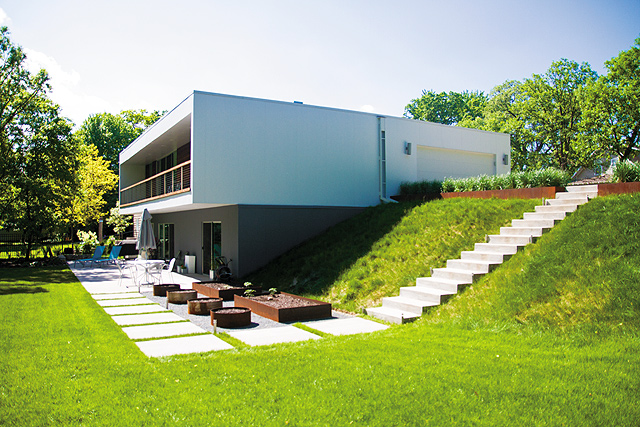 Burgess in the spring. Photo by Tracy LeCapitaine

After living in their 1 1/2 story home in the Como Park area of St. Paul for eight years, Heather Jennings and Noelle Stoyles decided to find a home that better fit their needs. Although they loved the location (especially the 3/4 mile commute to work for Noelle) and the number of bedrooms/bathrooms they had, they felt that, overall, the rooms were very compartmentalized and often left them feeling segregated from each other, especially when entertaining guests. The couple searched  the Twin Cities for their perfect home and fell in love with a few houses in St. Paul’s University Grove neighborhood. They  made offers on the homes which all fell through. In hindsight, Heather and Noelle are glad that happened, “We are obviously happy now that they did fall through because we really feel lucky to get to live in our space.” The couple eventually found a generously sized 3/4 acre lot in  their beloved Como Park neighborhood and started the collaboration with Shelter Architecture to design and build their affordable modern dream home that would later be dubbed “Burgess.” As the design progressed, the builder, GreenLight (formerly Palladian), joined the team to work through price estimates and mock up exterior cladding options.

From the beginning, Heather and Noelle both had a good idea of their “must-haves” and “wish list” items for their new home along with their overall minimalist design  aesthetic. They were both very attracted to the efficiently designed 5ive House, designed by Shelter, with the use of it’s simple materials and minimalist forms. 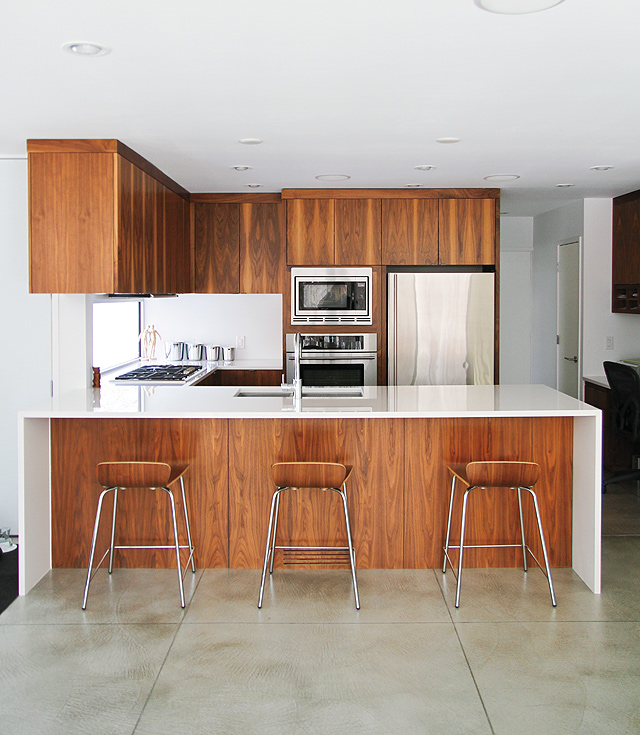 “It wasn’t an extravagant home; it was efficient,” says Heather. Although the couple both grew up in the outskirts in Iowa, one in a 1886 farmhouse and the other in the traditional two-story home in the “big town” nearby, they both found that they liked clean lines and a minimalist  approach to the space they inhabited.  “As a couple, we are really drawn to the same things when it comes to style and design, which really helps when going through the building process,” stated Heather.

After scouring over house plans of the homes they had put offers on, thumbing and ripping out pages from magazines and cruising through websites and blogs, Heather and Noelle prioritized some of their must-haves into a list that included concrete floors, sleek commercial aluminum windows, 3 bedrooms, 2 baths, flat roofs, a workout room, and, above all, an open floor plan to remedy the segregation they often felt in their current home.  They worked with Shelter to integrate their ideas into their “forever dream home,” so much so that their main level is completely accessible and designed for one-story living for the couple to grow old together and still be able to live in their house.

“We founded our firm on the notion of sustainability; that idea quickly transferred into the notion that if a home isn’t accessible, it isn’t really sustainable,” says Shelter Architecture’s Founding Partner Jackie Millea. “When building from the ground up, you have an opportunity to design for any circumstance that might happen to a family member, including a temporary or permanent disability, with the idea that a home can accommodate all stages of life including aging in place. We work very hard to create one-floor living opportunities when possible. This included creating a guest suite on the main level that could accommodate aging guests who come to visit.” 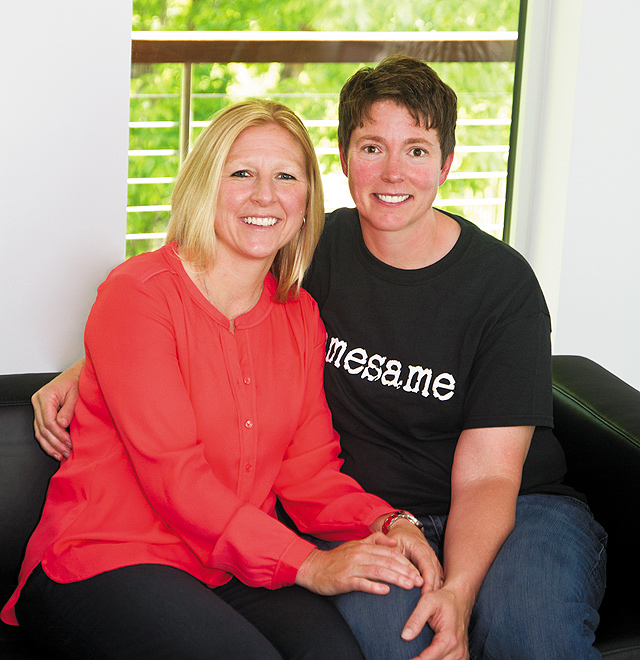 ”During the conception of the home, we wanted to see if there was any meaning in creating a home for two women to share, basically a woman-centric home. Initially, the ‘work areas’ of the home were analyzed—kitchen, bathrooms, laundry area—and these spaces became very tailored to the way that Heather and Noelle intended to live in their new home,” explained Millea. “When designing the bedroom suite, we initially had a larger sink/vanity area, but as we discovered they had very different morning routines allowing us to simplify this area.” Heather confirmed this assessment, “Our master bath didn’t need to occupy us both at the same time, usually. Plus, I am pretty quick to get ready while Noelle takes a little longer.” (Insert head nodding from friends.)

When Shelter studied how the couple lived and used their old house, they learned that Heather works from home and is usually found in front of a computer or whipping up some delicacy in the kitchen. In their old house, that meant she was often in the back office tucked away from the main living areas. In Burgess, the office was situated right smack dab in the kitchen which is connected to the main living area. 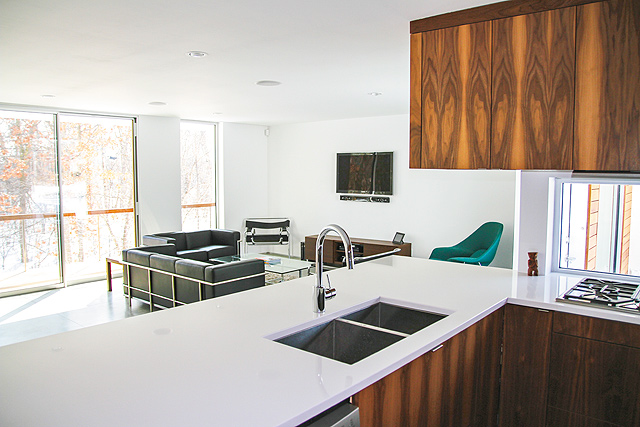 Open areas for entertaining, with access to the outdoors. Photo by Tracy LeCapitaine

Along with the kitchen/office opening up to the main living room, the south wall is comprised of floor-to-ceiling windows highlighting their gorgeous views and connecting them to nature or, as they describe,  “It’s like we’re living in a tree house all of the time.” A dramatic change from their previous home where they were closed off from each other.

“Another aspect that drove our design was the entertaining space. We have amassed a very tight group of friends since moving to the Twin Cities in 1999, and like to entertain a lot.”  Millea says Shelter responded accordingly, “The main level living area can quickly a become a dance floor with a lovely heated floor for dancing barefoot!  The lower level living area has enough comfy seating for everyone, becoming a great place to watch the game.”

When designing their lower level, it was very important to them to not have their basement feel like, well, a basement! Large windows and high ceilings along with the overall layout make this space feel as open and airy as the main level. A workout room was a high priority for the couple especially for the avid runner of the family, Noelle. High ceilings not only assisted in creating the open airy feeling of the lower level but they were also a matter of necessity as Heather reaches about 6ft. and the extra head room is needed when she  works out on the treadmill. Along with the guest room and workout room the couple have a room in their lower level referred to as “The Baseball Card Room.”  A room devoted solely to a baseball card collection may seem extravagant but technically the room is the couple’s fourth bedroom and is used as a guest room, along with a place to store Heather’s baseball cards and comic book collections. 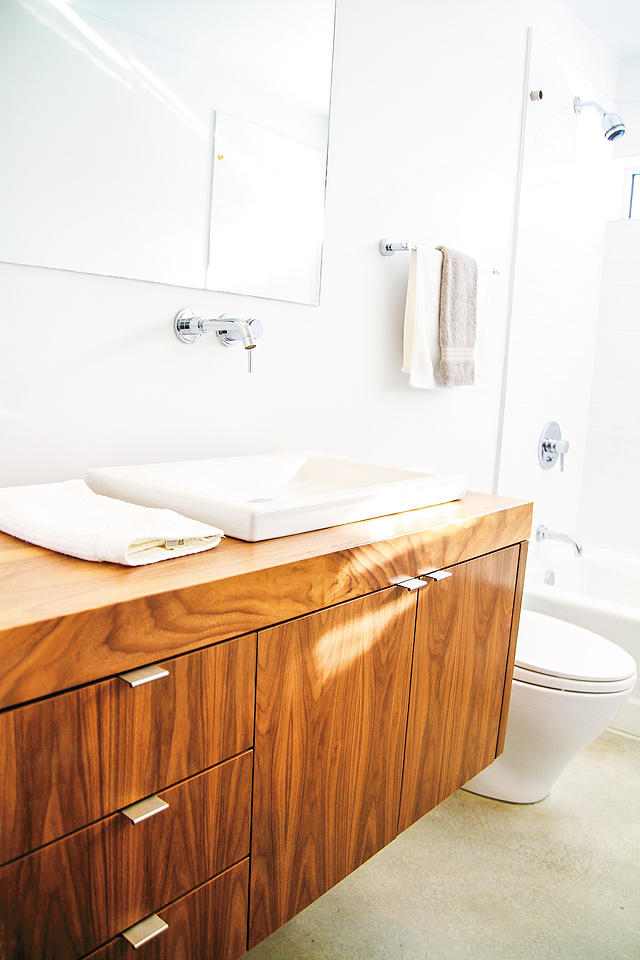 There are countless things to consider when designing a new home. In the case of Burgess, efficient and thoughtful storage was a high priority as was using modern materials. However, looks alone did not dictate the final material selection; selections also needed to deliver low-maintenance and clean-ability. Millea points out that they also considered areas to relax and rejuvenate. For Noelle, that space is her gym. The gym takes advantage of the outdoor space with views and a large sliding door. The final result was the perfect home for how Heather and Noelle live. Modern, efficient, gracious, and inviting.

Lisa Antenucci is an award-winning dynamo at Shelter; an innovative, creative, yet accessible design studio specializing in the architecture and interior design of sustainable homes and unique commercial spaces. See her work at shelterarchitecture.com.

For more information about GreenLight Builders, go to www.greenlightmn.com.