Karamo Brown, the Newest Addition to the Oprah Brand 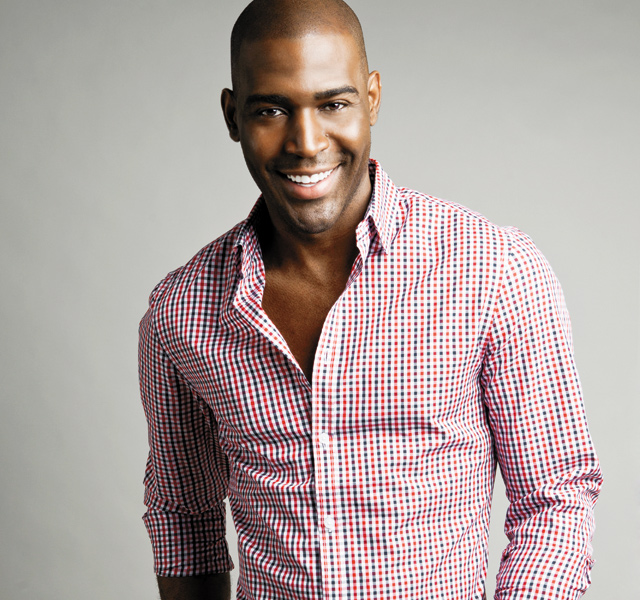 As the host of #OWNShow, a daily digital show brought to you by the Oprah Winfrey empire, Karamo Brown provides the audience with stackable clips that entertain, educate, and inspire them to live their best life.

Curating the best from across Oprah’s many platforms (everything from the network to the magazine), Brown gives the audience a more direct view into the Oprah brand. He says, “I do everything from interview experts and celebrities, discuss the OWN network shows and do a segment called ‘OWN Minute’ where I encourage the audience to be take a moment for themselves.” Aha! There’s that Oprah zen we all seek so desperately.

Despite being a web show, #OWNShow is approached exactly as if it were a live television show. “Our executive producer does a great job of running the show as if it were live,” Brown shares. “It allows the interviews to be more authentic and real and allows us, as hosts, to grow and give our best each time.”

That attention to growth and authenticity allows Brown to use popular culture to entertain as well as inspire viewers. The secret, he says, is that viewers can expect him to have fun with them while also being assured that he will do the research to get them the information they need to live their best life (there’s that Oprah mantra again). Laughing, Brown adds, “There is a clip of me teaching the Golden Sisters how to dance and another of me figuring out how and sharing tips on how to give up our fears.”

Put simply, #OWNShow is about getting those quick moments of fun, information, and inspiration throughout the day to help you be your best. “If you love any of the Oprah brands (Oprah Winfrey Show, O Magazine, oprah.com) then you will love our show because we pull from them all to give you the best content,” Brown says.

#OWNShow isn’t Brown’s first foray into the broadcast realm, however. The openly gay Brown appeared on a 2003 episode of The 5th Wheel, a heterosexual dating game show, followed by a stint on the fifteenth season of MTV’s The Real World, where it was revealed that he is an avid fan of Beyoncé, the Lakers, and art galleries, and dreamt of visiting Japan.

Inquiring about this reality TV background, Brown laughs, responding, “How did you hear about that dating show?” Pausing to chuckle again, he continued, “But yes, reality TV does help me as a host. Being on The Real World, I had to be open and honest about who I am. There was no hiding my flaws. As a TV host, I have to make sure that I am being my authentic self. That’s the only way that the audience will connect with me.”

In true Oprah fashion, the stars aligned and good vibes were sent Brown’s way to get him to where he is today. Having spent the last three years hosting small gigs “just to continue to gain more skills and perfect my craft as a host,” Brown was ready for the next step. He says, “A few months back I told the universe I am ready for the first big gig—to take my career to the next level. A dear friend told me that the network was casting for a new host. As Oprah says, ‘When Preparation and Opportunity Meet You’ll Find Success.’ and I was was ready, prepared, open, and the rest is history.”

For Brown, it was that history that prepared him and drove his passion to become a public figure. Brown describes the simultaneous luxury and curse of being able to mask his sexuality. “People didn’t automatically suspect that I was gay which made them feel comfortable enough to share their feelings about the gay community with me; which most times was negative,” he shares. “I knew that if I didn’t speak up and share my truth that these people might continue to live in their ignorance and that they may continue to bully other gay kids who were open about their sexuality. Once I shared my truth, I instinctually knew that part of my purpose was to use my courage to make the community I was living in better for the gay kids coming up behind me.”

And yet, at first glance, Brown’s story seems different than many of the children we hear about today. His parents weren’t born in this country, coming from Jamaica with the clear intention to give Brown and his siblings every opportunity that wasn’t afforded to them growing up. They worked hard and it paid off. Brown’s father graduated and became an accountant while his mother entered into the dental field; which provided a very stable childhood for Brown and his sisters.

Of his parents’ story, Brown says, “They taught me that first no matter where you come from or what ‘obstacles’ you are faced with you CAN achieve your dreams. It also taught me that having clear intention and working hard is the clearest path to being successful.”

That work ethic and passion brought Brown to Oprah’s doorstep, so to speak, as he was on the brink of hosting the #OWNShow. Reflecting back, Brown credits that upbringing for his current approach to his job as well as his life. “When I got this job, I knew that the OWN audience may have never seen anyone like me and that it was going to be an eye opener for them,” he says. “You have a black man who is a single father and is gay. Any chance I can I get to share my personal story or more about who I am, I do. Because I know that there is someone out there who is looking at me and saying, ‘If he can be confident and accomplish his dreams, then I can too.’”

As the single father of two sons, Brown’s advice for parents is to relax and breathe. “When you are a parent, working and juggling kids, we get filled with this anxiety of getting everything done and making sure that the kids have everything. I say let that go,” Brown says, reminiscent of the wisdom Oprah has been imparting on American audiences since she began hosting duties in 1983. “Twenty years from now, do you want your kids remembering you as someone who was always on edge or someone who came home after a long day and shared a joke?”

It’s that same zest for life that translates into Brown’s love for entertaining. Summer entertaining, Brown says, is what he lives for. Calling it a great time to show how creative you can be, Brown says summer time is about having fun and enjoying life. Getting his kids and friends involved, Brown hosted a Yellow Summer Party last year, urging each guest to bring a decoration or dish that was yellow. Despite getting a lot of lemonade, Brown says it turned out to be a lot of fun and got everyone involved.

How does Brown prepare for these get-togethers? “I build furniture so I like to take time to go to my local hardwood store and build something that can be used for my summer parties. Whether it is a rack for my spices that I will use during my barbecues or a table to put the food on.”

Now that Brown has reached the big leagues (read: working for Oprah), he plans to just continue being the best father and host he can be. “Also, I am currently moving into producing content and selling shows, which I am very excited about,” he says. “I also hope to get back into reality TV soon and also get into radio. I would say the sky’s the limit for me but I live my life as if there are no limits. So I will just keep going after every dream I have.”