Kathie: Where are you going when you leave here? Don’t you know?

Kathie: Just trying to make conversation. It means nothing to me.

Johnny: Well, on the weekends, we go out and have a ball.

Kathie: And what do you do? I mean, do you just ride around? Or do you go on some sort of a picnic or something?

Johnny: A picnic? Man, you are too square. I’ll have to straighten you out. Now, listen, you don’t go any one special place. That’s cornball style. You just go. [He snaps his fingers.] A bunch gets together after all week it builds up, you just…the idea is to have a ball. Now if you gonna stay cool, you got to wail. You got to put somethin’ down. You got to make some jive. Don’t you know what I’m talkin’ about?

“Just gonna go.” Not much has changed in the motorcycle world since Marlon Brando drawled those words in 1953’s The Wild One.

Laura Hultman is a police officer from the Minneapolis area, and the proud owner of a Harley Sportster 1200. “There’s just something about riding that seems so freeing to me. Just you, the road and the wind in your face. Just ride without worrying about where you are going.” 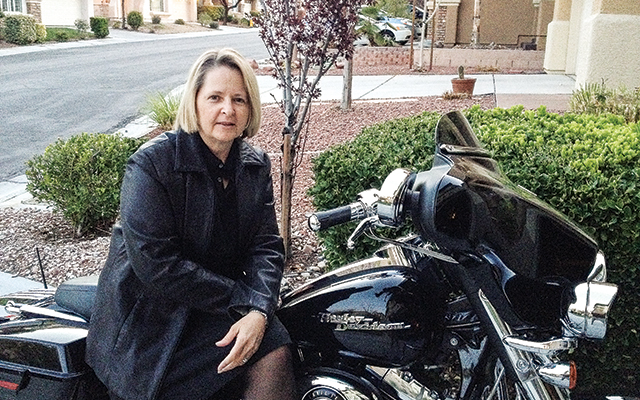 Kristine Kuzema owns a Harley Street Glide. A lawyer from Las Vegas, she also describes the euphoria of being out on the open road. “Incredible! Freedom! Zen-like…happiness. It feels powerful in that you are on a machine that, with the twist of your wrist on the throttle, moves swiftly. You are one with the bike in curves at 60–70mph on a beautiful mountain highway. I smile every single time I get on it.”

Motorcycle culture grew in the United States post-World War II, a war in which motorcycles replaced horses as something of a present-day cavalry. Upon returning home, many men, including gay men, remained in port cities. Motorcycle clubs began popping up throughout California and Hollywood embraced the coinciding rebellious culture that came with them. The first gay motorcycle club, the Satyrs, was founded in Los Angeles the year following Brando’s Wild One. Gay bikers were a subculture to a counterculture, eschewing stereotypical gay effeminacy for leather and masculinity.

For women, the biker scene came decades later. In 1976 a group of women motorcyclists gathered for the San Francisco Pride parade, and were placed first in the procession. One of them coined the phrase “Dykes on Bikes,” a term the women proudly wore and later trademarked. Informally, women continued to ride in the Pride parade there and elsewhere, until 1984, when a group of bikers including Sabine Balden, organized the Women’s Motorcycle Contingent to appeal to all women motorcyclists.

“Politics were different then, more identity politics, and we decided we wanted to be more inclusive than just ‘dykes.’ We met year-round, once a month until about March, then every two weeks until the beginning of June, then weekly.” Sabine still lives in the Bay area, retired after seventeen years with the San Francisco Fire Department, and she’s put more miles on her Honda Valkyrie than most have on their cars. Regardless of the inclusive name, Balden says, “Most everyone there, myself included, was an effing dyke biker, who had to swagger in order to be taken seriously out there, and we were not used to playing nice.”

That swagger was necessary, Balden says, to offset the prevalent attitude that women shouldn’t ride, and that if they did, it should be seated behind their boyfriend on his bike.

“I’ve been riding since I was 18. Back then, riding was more exclusively male. Here I was, living in the city, riding in the rain, the wind, city traffic, doing the household groceries on my bike, crossing the bridge daily, and men would see my helmet and ask whose bike I was riding on the back of. Now, I’ve been riding longer than some of those idiots have been alive, my current bike has more miles than they’ve ever ridden, and they still presume to give me advice, because you know, the little lady could probably use some pointers. It was the same sexism and homophobia all the other dykes had to live with, and the added indignity of men asking us if that bike was our boyfriend’s old bike. At a stop light, at a gas station. I don’t even go to bike events anymore. I’ve been to Sturgis three times, twice by accident, meaning I was riding that stretch at the wrong time, and there’s only one road through South Dakota, I swear. I don’t know if you’ve ever worked in a ‘man’s job,’ whatever the hell that means, but you have to have this swagger or they won’t leave you alone. I learned in the biker community, and then perfected it in the fire department.”

Kristine Kuzema describes a similar experience. She, too, has been riding since her childhood. “My dad had me shifting gears in his Mustang when I was five years old and I’ve always had an interest in cars and motorcycles. My mom and step-dad bought me my first motorcycle. We lived at the base of Sunrise Mountain and so there was plenty of desert and shoulders along roads to ride on back then.”

Kuzema has had her own encounters with gas station clerks who ask whose bike she’s on, and understands the draw of groups such as Dykes on Bikes. “I guess it stems from not being pigeon-holed into traditional female roles. Actually, the first I became aware of the lesbian motorcycle culture was when I learned of Dykes on Bikes. I lived in Seattle from 1987 to 2002 and there was always a contingent in the Pride parade. I rode in many of them and one year, my mother rode on the back of my bike with a t-shirt that had ‘I’m the mother and proud’ on the back of it.”

Today, cities across the US have their own chapters of Dykes on Bikes and gay motorcycle clubs. Minneapolis is home to a chapter that rides yearly in the parade, as well as the men’s club, Twin City Riders. The draw to biker culture is similar today to the appeal sixty years ago.

“The gear, the planning. Going to Mountain Springs Saloon for a ride on a nice day and capping it off with a good cigar and talk with friends.” Kuzema describes road trips, or runs, in vivid detail, remembering burger joints and hole-in-the-wall eateries in remote locations. It’s not the ‘where you’re going’ but the entire experience of getting there that pulls people in. Social status and class crumble within a tight-knight camaraderie focused on a shared experience. 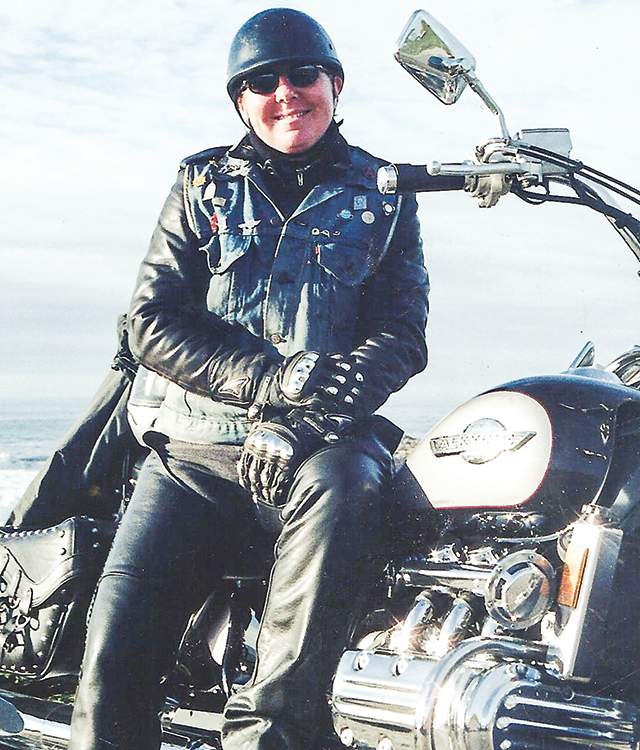 Sabine Balden says, “[It’s the] iron horse, the modern version of horseback riding. Go west, young man! And seek your fortune! I do a lot of motorcycle camping, and just ride until mid-afternoon, and then start looking for camping. Constant adventure, always new experiences. Little House on The Prairie and Sons of Anarchy all rolled into one.”

She agrees the gear is a fun aspect of the biker world and important in how one presents themselves. It can identify you as traditional, or a gear head; a newbie, or part of a club. She describes the various subcultures as being similar to that of the greater GLBT community. A leather jacket and chaps could identify a rider as more traditional, she says. “Kevlar jackets, with lots of molded joint and back protection are more associated with groups who like to knee drag through curves on their café racers.” Someone new might be identified by matching and unscratched gear. “A gear head has a GoPro attached to the top of their helmet, has every gadget known to man attached to their jacket and their bike.” Some clubs identify themselves with patches, Sons of Anarchy style. She is careful to qualify these statements as generalizations with plenty of exceptions.

And of course, it’d be foolish to discount the allure of the bike itself. The machines have long been metaphors for speed, danger, and sexuality. The motorcycle says as much about its rider as anything else. The Wild One’s Brando had his Triumph Thunderbird. Peter Fonda rode the Captain America Chopper in Easy Rider. Who could forget Arnold Schwarzenegger on a Harley Davidson Fat Boy in Terminator 2 or Carrie Ann-Moss’s Ducati in the chase scene of The Matrix: Reloaded? And more recently Jax Teller led the fictional Sons of Anarchy on a Harley Davidson Dyna-Glide.

Choosing a bike is all about personal preference. Beginning bikers usually start with a lower CC model, which are also used in motorcycle classes. Seat height and handle bar comfort are considerations.

Laura Hultman says, “For me, comfort was a big deal. I wanted something I could ride for hours without getting sore. I wanted something loud. I decided to buy a Harley because I wanted the best. They are comfortable and loud. Harleys don’t depreciate in value much so I know I’ll get a good price when I sell it as well. There are bragging rights when you own a Harley. Lastly, as it is my first bike, I wanted something that wasn’t too big or heavy for me. Now that I am more of an experienced rider, I realized that the size of the bike doesn’t really affect your control over it unless you parked on a hill and need to back it up!”

Sabine Balden chose a quieter model. “I like quiet bikes so I can camp without scaring away all the critters. I have a six-cylinder Honda.” Last year, her odometer rolled over, “So I’m now working on my second 100k miles. You work your way up. You have to start small-ish, so you can pick it up, because you WILL drop it a few times. Forget to put the kick stand down. Drive off with the handle bar lock on. Park her on a downhill, and not put her in gear. Stupid things like that. I started with a 250, then went 450, then 650, then 1200, then 1500. She’s what’s called a cruiser — longer, more comfortable. She’s Valkyrie. And I’m German. Not everyone gives their bikes names, but I do. Her name is SEDUSSA, and she got the plate to match.”

These women speak about their bikes with pride, and share pictures, as one would of a beloved family member. And indeed, these men and women who ride are beloved members of the GLBT community. They’re often on the receiving end of the biggest cheers at Pride parades, revving their engines enthusiastically to the whoops and the yells. Perhaps unbeknownst to them, they are our protectors, too. I vividly recall Duluth Pride a few summers past, where anti-gay protestors claimed a street corner near the start of the parade. Three bikers calmly rode over to the man bellowing Bible verses from his bullhorn, parked in front of him and turned to face the parade participants and viewers. In their rugged leather, seated upon those brilliant machines, they looked for all the world like our own personal Hell’s Angels, and they revved their engines louder and louder. Soon, no one could hear a bullhorn for the deafening sound of engines and applause and thanks from the crowd. And then, like Johnny said, well, we went out and had a ball.