Older homes have a certain charm; some sort of character that you just don’t find in newer homes. But with that charm and character comes a certain responsibility to maintain and update. 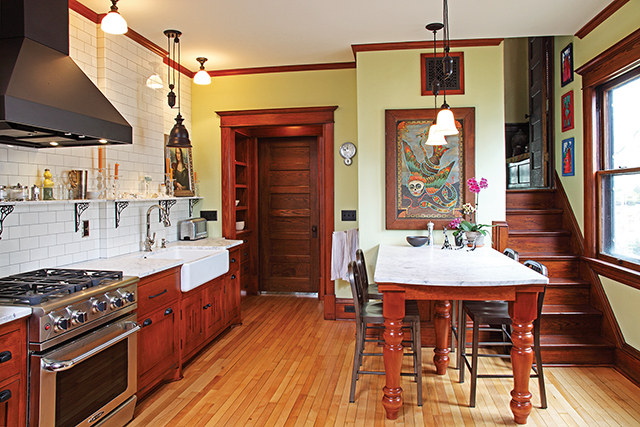 Just ask Frank Fitzgerald and John Evans. The couple’s home was built in 1909 and very little had been changed over time: the woodwork had not been painted, the existing pantry and maid’s staircase were intact, and the kitchen itself had had very little done to it outside of simple lower cabinets and a new sink added.

“It is a large house for two people so we really did not need additional day-to-day living space, we simply wanted the spaces we have to function better,” Frank says. “For example, we did not have a vent hood over the stove and the refrigerator was in the mudroom next to the kitchen because that is where it fit best.”

The couple’s redesign project addressed both of those issues. The kitchen update also included adding a bit of storage space. “I also really liked that our kitchen did not have cupboards in it; the pantry served for storage as it had when the house was built 100+ years ago,” Frank says. “Hence the idea to make the addition look like a large pantry by incorporating the old pantry with a new pantry.”

The addition of a main-level bathroom meant their home could finally suit their needs, but this redesign was several years in the making. Frank and John visited several homes in the Remodelers Showcase over the course of three years, which is where they met Nathan Shanklin with Next Level Renovation. The couple had seen a house Next Level had remodeled close to theirs with a similar vintage and style; Frank and John thought the work was thoughtful to the original character of the house and reached out. 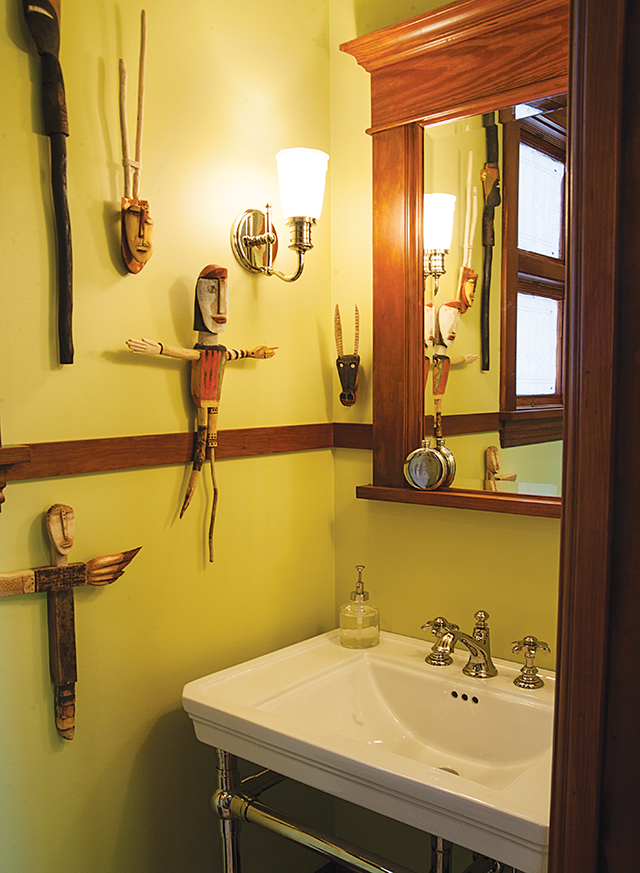 “Frank is a landscape architect and very detail-oriented, so he had a pretty good idea of what he wanted us to implement,” Nathan says. “In many cases, we work with architects and interior designers to lay out the design for our projects. In this case, we were able to take Frank and John’s ideas and create the construction plans in-house.”

After working for several months to develop the plans and details of the redesign, the project started in April with an anticipated completion in early August; however, as with any home updates, the process can take longer than expected. John says the construction was largely done by early January and now only smaller punch list items remain.

For Frank, the largest concern heading into the project initially was the amount of ambiguity in starting a redesign. “I prepared initial sketches and layouts and then we worked with Next Level to develop the plan but not every detail was figured out before we signed a contract,” he says. “So, you sign a contract for a lot of money, hoping that you are all imagining the same project. Good communication is key to a project like this.”

After all is said and done, Frank and John are very pleased with the project and how well it blends with the rest of the home. “My greatest fear was the addition would diminish the quaint charm of the original pantry and look like an awkward 2015 addition ten years down the road. Fortunately it looks great and, I think, in keeping with the original house.” 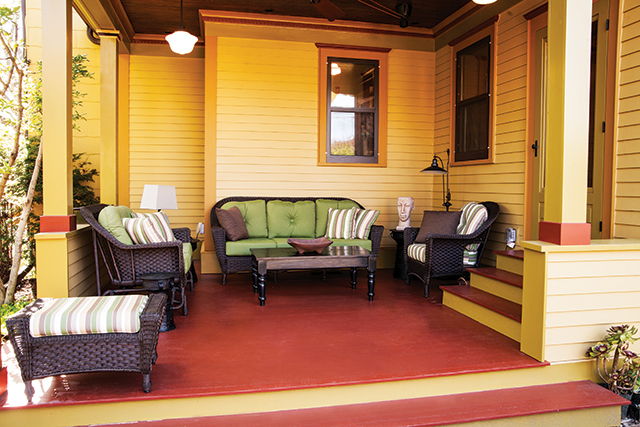 Blending the old with the new was the main goal of the project, Nathan says. “You can see century-old cabinets marry right into brand new constructed cabinets,” he shares. “We brought in an expert in wood finishing that came up with a recipe for matching the stain and finish. We created molds of the existing woodwork and had new woodwork made to match, identical to the original woodwork of the home.”

“A big trend with a lot of our clients is about ‘blending,'” he continues. “So many of our clients want that seamless transition from old to new, but still incorporating modern appliances and plumbing fixtures. We even hid the wall oven in a cabinet with pocket doors to conceal it when not in use.”

Beyond the woodwork, the couple tied the old with the new throughout the rest of the project as well, including finding matching hardware (which is remarkably close considering the original hardware is over 100 years old), and vintage-looking light fixtures (without falling into the trap of trendy interpretations of vintage fixtures). The project also entailed sourcing subway tile that is made the old-fashioned way, resulting in a tile that is flatter than most tile you find today and more like historic subway tile, in addition to sourcing floor tile for the bathroom that duplicates historic hexagonal porcelain tiles.

Completing a kitchen renovation that expanded the existing pantry and added a new bathroom and covered porch gets the couple closer to realizing the final backyard. “I am always thinking about how things look and spatially fit so the addition is part of a bigger plan that incorporates the site,” Frank says. “I have slowly been chipping away at getting the landscape where I want it to be. About 10 years ago we built a new garage which allowed us to reorient the garage, changing the access from the street to the alley. That made a big change in the landscape. I have had a master plan drawn for several years which included an addition on the house. The new covered porch, set two steps off of the ground, is very much about being ‘in’ the landscape.” 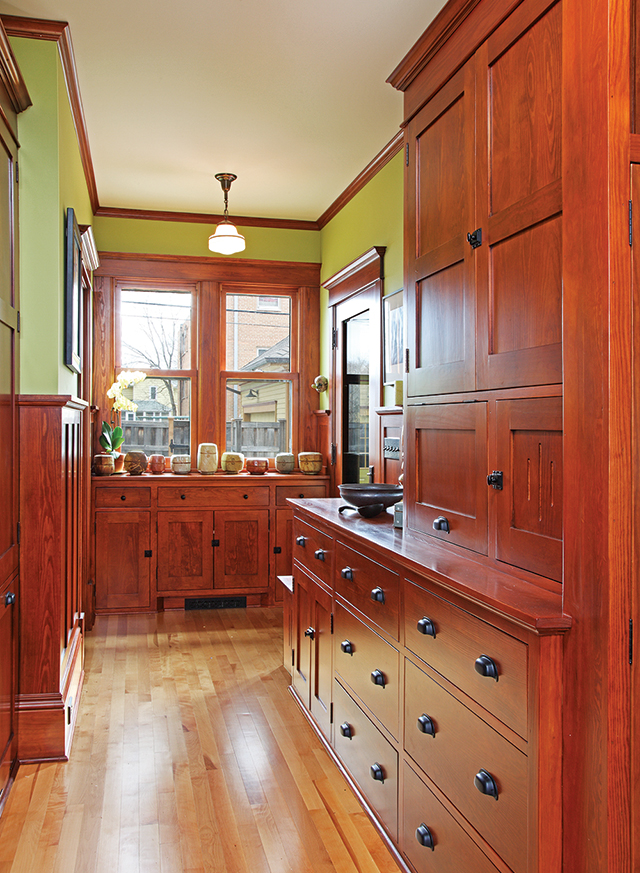 Of course, such an extensive project requires a lot from everyone involved. “We were surprised how much of our time the project took,” John says. “We assumed that when hiring a general contractor to oversee and manage the project our engagement on the project would be limited, but in the end we had to spend a lot of time watching the details, answering questions, etc. This was partly due to our interest in every small detail, and we’ve since learned is typical for most people when doing a remodeling project.”

“I learned that it is not as easy, fast, or inexpensive as it appears on the various home remodeling shows,” he continues. “We also found out that the cost of the project exceeded the amount of value added to the house. We are comfortable with this ‘partial return’ because we are happy with the improvements, it is exactly what we want, and we are planning to enjoy the new kitchen, porch, and bathroom for years to come.”

The couple is clearly thrilled with the new space, and guests have also been complimentary of the project. “The best compliment, in my opinion,” Frank says, “came from our neighbor who is an excellent woodworker who asked ‘Where do the new cabinets start?’ That was exactly what I wanted to hear! Another sign of success was at a dinner party we hosted for friends. A typical dinner party prior to the addition started in the kitchen with drinks and conversation until we had to shoo people out so that we could make the meal. At the last dinner party we had, everyone stayed in the kitchen enjoying drinks and appetizers while we cooked.”

While admitting a bit of construction fatigue (and lighter billfolds), the couple doesn’t plan to tackle another project for quite some time. Although they will likely remodel the upstairs bathroom at some point, they say that won’t be happening any time soon.

The key to a good remodel, Nathan says, is hiring good people. “Don’t hire an individual just on price,” he says. “Beyond doing your homework on the person you are hiring, you need to click with them. Remodeling is a lengthy process; you need to hire someone that you can communicate with, talk to, reason with, share feelings with, etc. Frank and John were wonderful to work with on this project. With every project you have ups and downs and they handled those well. They complimented us when they liked what they saw, and were not afraid to let us know if something wasn’t of their liking.”

From a design standpoint, Nathan’s best advice is to define your home and the way you live or, as he says, “listen to your home.” Look at the detail that is already there and emulate it throughout the project. “The house will tell you what to do and make the process so much easier,” he says. “Sometimes you don’t have to re-invent the wheel. Looking at the way you live is important; you don’t want to remodel a space the way the neighbor is remodeling just because it looks nice. You have the golden opportunity to put things where you will use them the most. You can design things to your needs. You can make things more accessible for your body type. Take advantage of this time and build a project that when you are done, you smile when you walk in the door.”