Searching For Jette: A Journey To Fergus Falls 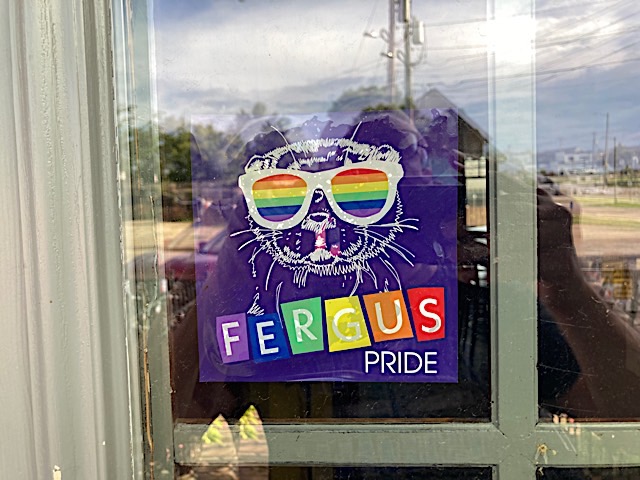 On June 8, 2022, the world lost Jette Frandson at the age of 20 due to drowning after jumping off of a pontoon boat in the Detroit Lakes area.

Jette was a gentle soul who loved having fun. He was also the spark that his mother Krystyne needed to found SAGA Youth in Fergus Falls, as well as to put on the first Fergus Pride in 2021.

Because of this adventurous and sweet young man, the work that Krystyne put in to create the youth group and the pride celebration was recognized by Lavender Magazine as one of this year’s Community Awards recipients.

What made Jette such a special human being through his 20 years of life? Because of the lives he touched, I also ask why is Fergus Falls now on our LGBTQ map?

It is one thing to talk about it. It is another to see to oneself. So, I did. Therefore, I pointed a 2022 Ford Expedition outbound to find out more what Fergus Falls was all about.

Fergus Falls is up on Interstate 94 just northwest of Alexandria, and somewhere between St. Cloud and Fargo-Moorhead. As the county seat of Otter Tail County, this town of over 14,000 residents is best described as eclectic. This city is an intersection of both rural Minnesota ways and some fresh ideas.

These fresh ideas got a chance to show its colors back in June for the second Fergus Pride. That, along with the establishment of SAGA Youth and other related community efforts over the past few years.

One of them is a drag troupe that puts on the Catwalk Parties a few times a year. Dominic Facio, the Executive Director of DomFreq Productions, organized the first drag show in Fergus Falls back in 2018. Facio explained that the first show “was sold out with a room packed full of eager folks and it was a jumping point to where we are now. People demanded more and so we did more.”

When I was there, the Catwalk crew just put on their seventh party. It was awesome!

Who would come to a drag show in Fergus Falls? One of the performers, Drew Smith, explained that the diversity of the crowd “is quite large. We’ve had extremely right-leaning people that you would not really expect to see at a drag show in a town like this. And then we’ve had very liberal people show up, which is more expected, but yeah, I don’t know.”

Another performer, Chelsea Beilhartz, added that “there’s a lot of new newcomers to the drag world so that’s been a really exciting thing on that of someone coming into a space, not knowing what to expect, and then coming up to us after the show and saying that was the most fun I’ve had in a really long time. And their walls got to drop down. They didn’t know what to expect. They had this certain visual, and it was a loving, caring…open-ended environment where you can feel like you can just be you and let loose for a couple hours and no judgment behind it and you feel safe. And that’s the most response out of the crowds that I notice, as a performer, when people come back up.”

What about all other hours of the day? What else would I find? A walk through downtown Fergus Falls reflects this intersection of tradition and the new. To find where we are welcomed, just look for the Fergus Pride stickers on the windows and doors.

You can start with Töast (116 S. Union Ave.) in the morning – literally. The café on Union Street, next to the Union Pizza & Brewing Co. (114 S. Union Ave.) – are both owned by the current Mayor of Fergus Falls. Both also welcome LGBTQ community and visitors to enjoy their take on food and drink. Breakfast at Töast was good, if not different than what you’re used to. Friendly service, too!

Walking around the corner, I was greeted by other businesses welcoming us. The Flower Mill (205 W. Lincoln Ave.) is a family-owned business run by an LGBTQ couple, providing floral arrangements and lovely additions to the garden. Across the street is Torri’s Tangles for Treasures (202 W. Lincoln Ave.) as your one-stop shop for yarn arts. Springboard For The Arts also has an office in Fergus Falls, to incubate the arts in the Lake Region and West Central Minnesota.

The stickers found on doors and windows of these businesses have resonance. They also reflect on Frandson’s work for so far in this community, as well as finding a safe place for Jette and others in SAGA Youth to discover and become part of a larger community.

One of the young LGBTQ people that have found SAGA Youth was Alyse Fielder, a senior at Fergus Falls High School. She attended the school’s Rainbow Club, which Fielder described as “a space for queer people to come in and just exist in a group together and indulge in queer culture and things like that, because we don’t get to do that much. And we just get to be friendly with each other and talk about just a lot of things. And a lot of us are also neuro divergent, so we find solace in group in that as well.”

While the club is run by the students with a faculty leader, the Rainbow Club is for LGBTQ students on campus. These students had their challenges along the way. Incidents occurred when there was anti-LGBTQ heckling and bullying occurring on campus. However, there was more of a need to do something more beyond the high school campus. That is how Fielder found SAGA Youth. So have other LGBTQ youth in Fergus Falls, across West Central Minnesota, and beyond – including Jette.

My main stop for my time in Fergus Falls was at Dining Car #423/Steel Wheels (423 S Cascade St.), both a performance venue and a restaurant/bar where the Catwalk Party took place while I was in town.

The drag mother of the troupe, Jeff Saunders, who performs as Lexi D, gave me an overall insight on what I saw that evening. “I like to create an environment where the barriers of everyday society can be diminished and just drop,” Sanders explained. “So, everyone’s a part of the same thing that’s happening right now, we’re all living in the moment, and there’s no left versus right, up versus down, or whatever. We can all just exist together and have a celebration and a fun time.”

I’ll say it again, it was a fun time!

What about Jette? I never got the chance to meet him. Before the accident, Frandson said that Jette wanted to meet everyone – the magazine staff, Krystyne’s fellow award winners, and all in attendance – when she received her Community Award. I was looking forward to meeting this young man, as he represented our community’s future in this state.

I did follow Jette’s trail back up to Fergus Falls. What I found was a loving community committed to making things better. With two Fergus Prides under their belt, Frandson, SAGA Youth, and the people I met in that community made great steps towards making this West Central Minnesota city a place where we can be ourselves authentically.