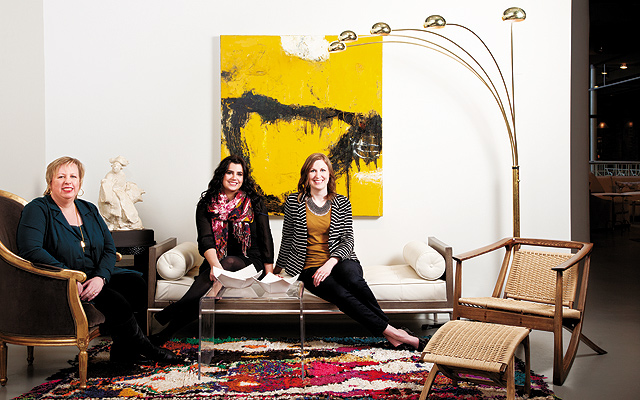 Every April, Midwestern followers of the American craft art movement look forward to the American Craft Council (ACC) show at the St. Paul RiverCentre, where more than 225 of the top artists from throughout the country gather to share their wares with more than 10,000 visitors. Although this year’s show is two weeks earlier than usual, it promises to be stronger than ever, with two new exhibitions and a craft beer-tasting room that features the work of a local interior designer and craft artist.

Whether you have followed this show for the more than 20 years that it’s been in the Twin Cities, or this year will be your first show, the 2014 show will delight you with new and established artists from around the country and experienced and emerging interior designers from the Twin Cities.  “One of the most exciting aspects of this year’s show is that the older and younger creative people are coming together in ways they haven’t before,” says ACC Marketing Director Pamela Diamond.

“Emerging artists and designers are excited to discover the long-standing traditions that are represented by ACC artists, and ACC artists are inspired by some of the emerging themes that new designers and artists bring to the party.”  As artists throughout the country know, getting into an ACC show isn’t easy. It is more strictly juried than almost any art show or festival in the Midwest.  The ACC sponsors equally elite shows in Baltimore, Atlanta and San Francisco.

“What is Craft” is a question that has that has prompted years of dialogue and debate. Some view Craft as an art, others as a hobby and everything in between. It’s a term that is experiencing a renaissance, and is used somewhat ubiquitously today to refer to things made by hand, ranging from bicycles to French fries, and from pizza to beer.

Editor-in-chief of American Craft magazine, Monica Moses, says “the lines between art and craft are blurry, but one distinction is that craft has always had a legacy of functionality, and the mastery of material tends to be more central to craft than it is to art.” She offers another distinction between the two saying, “most craft is three-dimensional, while art is often two. While no one has the definitive answers to the question ‘What is craft?’, what we tend to focus on in our magazine and at our shows is work that is dimensional, that wants to be seen and begs to be touched. It calls out to the hand. And that’s true for both the viewer and the maker.”

The American Craft Council, a national nonprofit educational organization, has been shaping the artisanal craft movement for decades. In 2010, after residing in New York City for 70 years, the ACC decided to move its national headquarters to the Twin Cities, citing the area’s strong arts and philanthropic culture as the ideal environment to assure Craft’s relevance for years to come.

Serving as a craft chronicler, tastemaker, convener, and provocateur through its award-winning bimonthly magazine American Craft, annual juried shows presenting artists and their work, thought leadership conferences, awards for excellence, research library, workshops, and seminars, the ACC is about to celebrate its 28th show in St. Paul at St. Paul RiverCentre April 10-13. For additional information, visit www.craftcouncil.org or follow us on Facebook at facebook.com/CraftCouncil and on Twitter at twitter.com/craftcouncil. 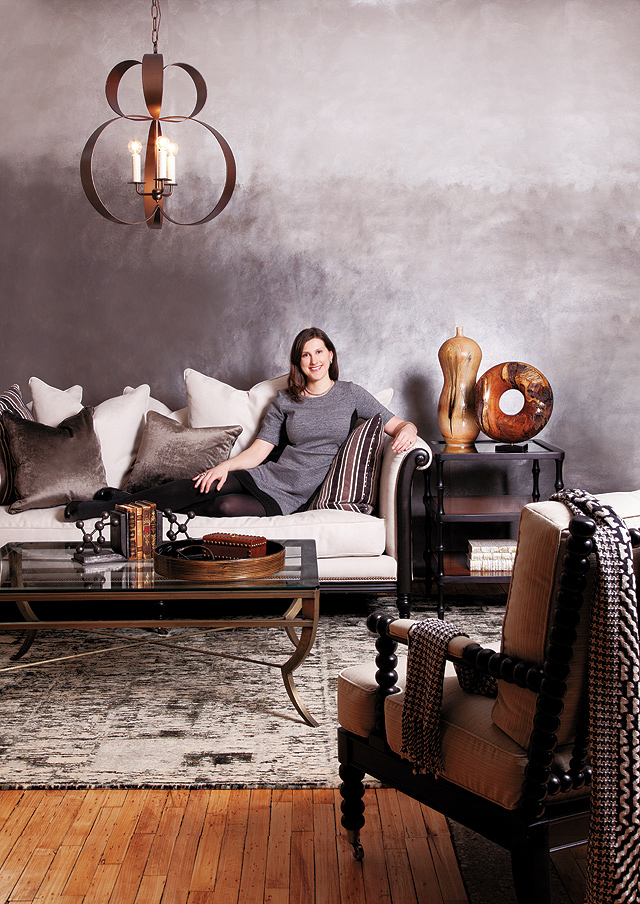 This vignette will be exhibited with nine others at the ACC show. Interior designer Desi Creswell chose to incorporate a black and white stars shawl by Muffy Young, Wood sculpture by Jim Keller, and Man Ho Cho ceramic sculpture into this inviting vignette. Website: www.desiid.com. Photo by Steve Henke

What can you expect at this year’s show?

“Now in its second year, we’ve added a new theme to our Make Room collaboration,” says Diamond. “The new theme, ‘Let’s Entertain’, puts craft into context by featuring room vignettes designed by local interior designers who have been inspired by objects of fine craft that are ideally suited for entertaining. From serving pieces to furniture, light fixtures to textiles, sculptures to decorative accessories, the possibilities are endless when it comes to the items a fine craft artist contributes to making a space feel warm and welcoming.”

Desi Creswell of Desi Interior Design in Minneapolis describes her Make Room vignette this way: “My room is inspired by the organic nature of the art: rustic wood edges, curvilinear lines of vases, and natural fibers of woven textile. Timeless furniture with black accents grounds the space while an ombre plaster finish provides a striking backdrop for the art to shine.  Most importantly, the space creates a comfortable, inviting environment that encourages one to linger.”

In contrast to Creswell’s neutral approach, Linda Engler of Engler Studio Interior Design in Edina says her inspiration resulted in “a bold, sophisticated mix of color, materials, contrasts, and eras – crafted and machined, raw and refined, light and dark, textural and sleek, vintage and modern – the sum of which we hope accomplishes our goal of an inspired and memorable vignette designed to cause passersby to stop and stare.”

The second new exhibition, the American Craft Charm Collection, features an exclusive handmade assortment of charms, charm bracelets, cluster pendants, and pins designed by several of the American Craft Council’s extraordinary jewelry artists. The collections will represent a broad range of aesthetics, price points, and materials, including alternative, semi-precious, and precious. Each artist’s collection will be on display in a special pop-up exhibition space on the show floor.

Also, new to the St. Paul show this year is a craft beer taproom, where the Twin Cities’ own Beer Dabbler, an organization focused on promoting the culture of craft beer, will host daily tastings from a selection of nine offerings from area microbreweries. The taproom will be designed by local design-and-build company, Brownsmith Restoration, and will feature handcrafted bar tops designed by ACC show artist Willie Willette of Willie Willette Works. Beer tastings will be offered throughout the show from these Minnesota Microbreweries: Indeed Brewing Company, Fulton Beer, Dangerous Man Brewing Company, Hayes Public House, Fitger’s Brewhouse, Sociable Cider Werks, Bang Brewing, plus Bent Paddle Brewing Company and Blacklist Brewing from Duluth.

When planning a visit to the ACC show, make sure to set aside anywhere from a few hours to a couple days, depending on how much you wish to see. And bring your walking shoes. You are sure to log anywhere from a mile to many miles visiting the 10 rooms developed by local interior designers, as well as the over 200 artists. Fortunately, there are cafeteria-style dining services available on the show floor, and you can stop for lunch – then keep on shopping.

TICKETS:
On-site Admission
$12 for a one-day pass
$28 for a three-day pass

Guests can save time by purchasing your tickets online at http://shows.craftcouncil.org/stpaul
Online tickets can be printed and brought right to the door.

ACC Membership:
The cost of membership ranges from $40 to $55 annually. To learn more, visit http://craftcouncil.org/membership/join