Alexa in Your Car?

Here is a left-field question: is Alexa the solution to voice recognition technology?

This is a question Amazon had to answer when they introduced Alexa three years ago. We often consider the idea when we think of how we could make our lives easier if we can use our voice to control our environment— and our drive. The technology itself has improved, but it took a lot of trial-and-error to accomplish this on various platforms.

Voice recognition technology was designed to address the need of balancing our attention span with the functions of life. For years, I have seen how it works in automobiles. From early Ford SYNC systems and other OEM software, the clarity of comprehension was in doubt. Though subsequent systems improved comprehension and recognition, the software was limited to understand specific commands, rather than full comprehension of destinations and music file titles.

I have never tried Alexa before. I had my dealings with automotive voice recognition systems and with Apple’s Siri. My close friend near Milwaukee had Alexa at his home. It gave me some food for thought as I tried it myself. 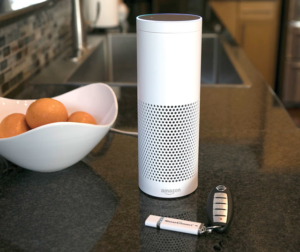 What makes Alexa unique is the wider voice recognition technology it utilizes. It reads even muddier voices and responds accordingly. Even for someone who had trouble with voice recognition software in the past, having Alexa understand exactly what I want is a revelation unto itself.

However, there is news about this technology. Ford will be using Alexa in their vehicles as early as next year. Volkswagen and Nissan will be following suit in some time, if not before Ford.

While we wait for Alexa’s arrival in our vehicles, we should look into the possibilities of the future in terms of what kind of technology we will be seeing and how we will be using it.

The basis of looking into this kind of technology is the struggle toward safer automobiles and equally safer drivers. The big challenge for us is to ensure that people are paying attention to the road before using any of the on-board technology, including autonomous self-driving.

On the road, we see someone on their mobile device trying to communicate with another person or entity. We know that a growing majority of solo and multiple-vehicle accidents are caused by distractions, including using mobile devices. Voice recognition software and technology is designed to keep your hands off of these devices while driving and let the software answer your requests instead. As we stated earlier, the technology is improving across the board—from organic technologies specific to a manufacturer to integration of Apple’s Siri and Google Voice into their vehicles.

Amazon’s Alexa is a “next-step” technology that enables a wider voice recognition scope from true voice comprehension to a wider number of command prompts and responses of the driver and occupants inside of the vehicle. As proven at home, Alexa integration will advance the idea of keeping a driver’s hands on the wheel instead of on a device or any controls.

This will not eliminate actual switches, knobs, and levers inside of an automobile, nor render them useless. Yet, Alexa’s technology is seen as a major step toward a larger future; one that will include autonomous driving.

Currently, active safety technology is enabled by switches and knobs. Some manufacturers have included their functionality into their voice recognition software. It is not without some glitches. Where Alexa might come into play is to use true voice recognition technology to tell the vehicle to set the cruise control for speed and distance in a single prompt—clearly in a comprehensible manner. It could also be used as a feedback device to assist in checking on a driver’s fitness towards taking a break or to clearly state a warning ahead on the highway. A true voice would be understood more responsively to a human than one that could be almost comprehensible as in current voice response and warning systems.

Granted, we should not see Alexa as the absolute and ultimate solution for vehicle control via voice recognition. There are probably other technologies that are being developed that would either meet or exceed Amazon’s technology. Some could be developed specifically for in-car use toward an autonomous driving world.

The next time you tell your Alexa to “turn off the lights” before you go to bed, imagine the possibilities.